Myrotvorets Is a Threat to Journalists Everywhere

This is the edited transcript of the presentation of Eva Karene Bartlett to Panel 2, “Defend the Right to Deliberate! Speak Out Against Blacklists and the Suppression of the Search for Truth,” of the Schiller Institute’s Sept. 10–11 Conference, “Inspiring Humanity To Survive the Greatest Crisis in World History.” Ms. Bartlett is an international journalist. 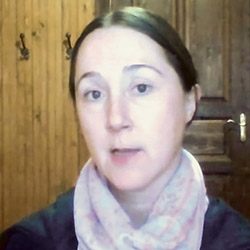 Hi. My name is Eva Karene Bartlett. I’m a Canadian and American citizen and journalist. I’ve been reporting from conflict zones since 2007, when I first went to Occupied Palestine. In late 2008, I went to the Gaza Strip, where I lived for a cumulative three years until March 2013, living there off and on. I was there during the 2008-9 Israeli war in Gaza, and also the 2012 Israeli war in Gaza.

In April 2014, I started reporting from Syria, and I continued to go back to Syria, including last year, a cumulative 15 times now, sometimes for extended periods.

In September 2019, I first went to the Donetsk People’s Republic in the Donbass and spent about three weeks there around the northern village of Horlivka, visiting areas that were being shelled on a daily and nightly basis by the Ukrainian forces, and speaking with the mostly-elderly residents whom I met, residents who were being terrorized by the Ukrainian shelling. They had nowhere to go, and had only the option of remaining there under the shelling, patching up their homes as best they could. It was truly an appalling situation. 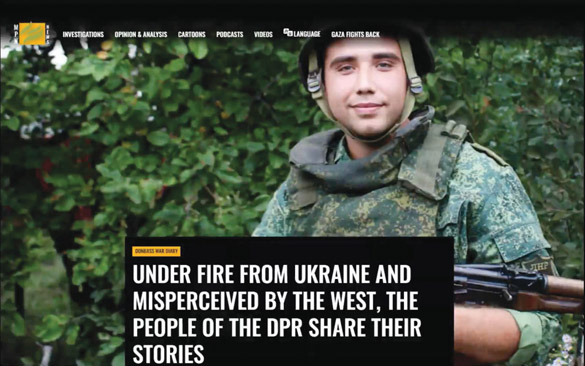 The administrator of the village of Zaitsevo described the Ukrainian shelling and deliberate attacks on homes as Ukraine taking out and destroying house by house, street by street. Indeed, while I was there, I saw the smoldering remains of a house that had been shelled a day or two prior.

After my 2019 visit, I wrote a lengthy article for MintPress News, detailing what I’d seen and heard and experienced. At some point after that, I was placed on the notorious Ukrainian Myrotvorets kill list. Now, that didn’t stop me from reporting. I continued to go to the Donbass this year; going in March with a delegation of other journalists, and then in April going back on my own, staying for a few weeks and doing so in subsequent months, until mid-August, when I left the Donbass.

In reporting from both the Donetsk and Lugansk People’s Republic, I’ve seen and heard of many of Ukraine’s atrocities and war crimes. For example, in one of my visits, Ukraine shelled a busy marketplace, killing five people. The bodies were still lying in the market when I visited.

In, I believe it was June, Ukraine—in an intense bout of Ukrainian shelling of the center of Donestsk—again, no military infrastructure there whatsoever. Purely civilian infrastructure, purely Ukrainian terrorism of civilians—Ukraine bombed a maternity hospital.

In last July, Ukraine began firing rockets containing the prohibited “Petal” or PFM-1 [anti-personnel] mines, raining them down on Donetsk and surrounding areas, including the very heart of Donetsk. These mines are incredibly difficult to spot, even when they’ve been indicated and there’s some sort of indicator around them. I myself saw many of them, but had a hard time picking them out visually. Obviously, I did not get close enough for them to blow my hand or feet off as they are designed to do. When I last saw an update, nearly 60 civilians have had primarily feet, but also hands, blown off by these prohibited mines. 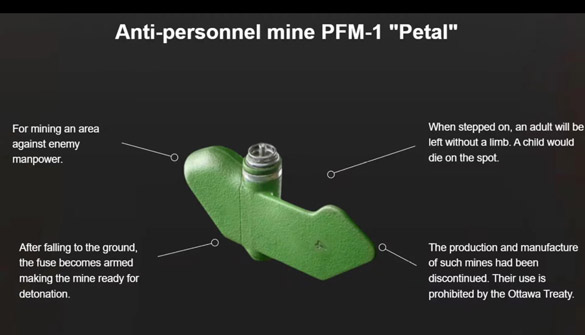 petalsinblood.com
Outlawed by the Anti-Personnel Landmines Convention (Ottawa Convention) in 1977, nearly 60 civilians have had their feet and hands blown off since July when the Ukrainian Army began raining down PFM-1 (“Petal”) mines on Donetsk.
View full size 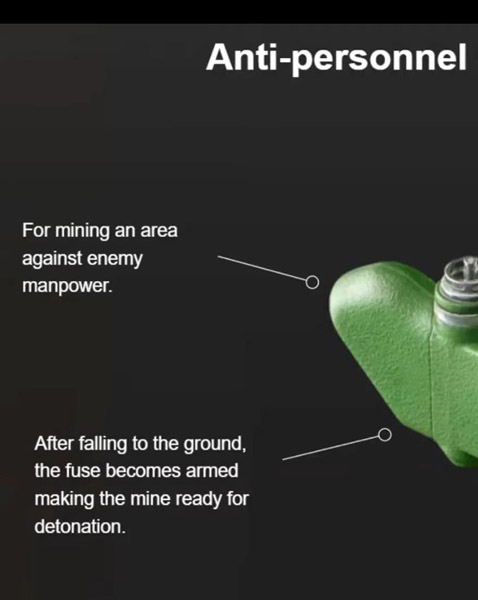 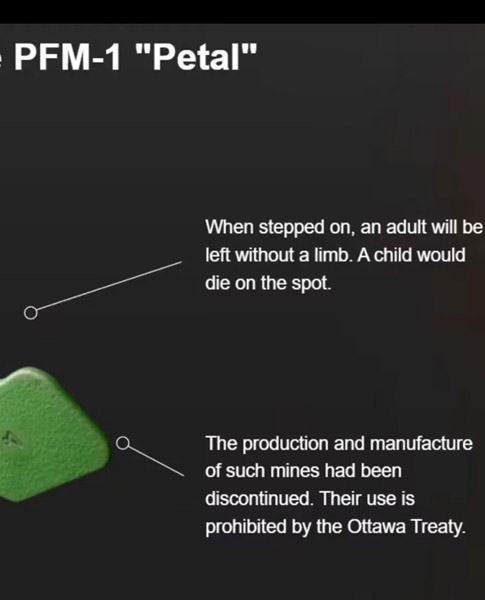 Ukraine signed the Ottawa Treaty, and its use of these mines is illegal; it’s a war crime. So, this is one of many war crimes I have documented in reporting from the Donbass. Canada unconditionally supports Ukraine. Canada has funded Ukraine up to $1 billion. Canada has trained Ukrainian soldiers, including Azov, and Canadians themselves have gone to fight in Ukraine. If they didn’t already have this Nazi ideology, certainly after being in Ukraine and indoctrinated by the Nazis there, Canadians returning to Canada will almost certainly have this ideology.

If I as a journalist and a Canadian citizen were to return to Canada, I have no idea what some of these Ukrainian nationalist-type Canadians would do to me. But I’m certain the Canadian government would not protect me at all.

Additionally, in July, Canada state broadcaster and main propagandist, the Canadian Broadcasting Corporation, or CBC, ran a smear on me in which they basically depicted me, of course, as a Russian propagandist, not even discussing what I’ve reported on from the Donbass, and thereby whitewashing the Ukraine war crimes. CBC, instead, in its report focussed on my participation in a war crimes tribunal in Moscow. The interesting thing about that, aside from the actually quite shoddy and pathetic smear of me, is that the CBC listed me as participating in that tribunal in April, when in fact it was March 11th. Where did the CBC get that information? Well, the only place they could have gotten that information is Ukraine’s Myrotvorets smear-list entry on me, which details my participation in that panel and incorrectly lists it as being in April.

It may have been coincidental that Ukraine bombed a hotel full of journalists, or it may not, because it was well-known that journalists stayed there.

So, I know for a fact that the CBC is aware of the kill list and is aware of my entry on it, but chose not to report on it. So independent media reached out to me in late May and conducted an interview with me on my reporting from the Donbass and also on the Myrotvorets entry. They concluded by saying they were going to contact major corporate media in Canada. Not a single corporate media entity has contacted me about that kill list.

It may have been coincidental that Ukraine bombed a hotel full of journalists, or it may not, because it was well-known that journalists stayed there. 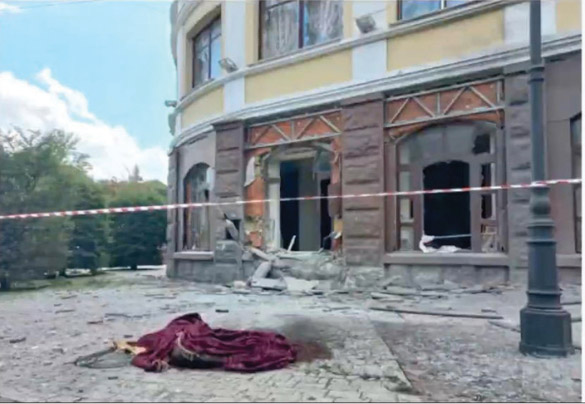 On August 4th when I was in Donetsk, Ukraine was bombing the very center of the city heavily. The first three bombs were about 200 meters away from the hotel I was staying in. The fourth and fifth landed 50 meters away and then exactly next to the hotel. It may have been coincidental that Ukraine bombed a hotel full of journalists, or it may not, because it was well-known that journalists stayed there. Four days prior, Louise Mensch had tweeted at Ukrainian special forces that I was in the Donbass. The tone of her tweet was effectively to “liquidate” me, as the Myrotvorets folks like to say.

Returning to the issue of Myrotvorets, it’s absolutely appalling that a database like this exists, openly calling for the murders of people like myself, yourselves, 327 children, simply because we are speaking about Ukraine’s war crimes and we’re speaking about the corruption within Ukraine. This list presents a very real threat to Ukrainians themselves, not only to journalists and to people who are speaking out, but to Ukrainians within Ukraine proper. Many of these Ukrainians have already been disappeared or killed.

As I said before, none of this will stop me from reporting, and I’m preparing to return to the Donbass in the near future. But the Myrotvorets list should not exist. We must do everything we can to have it removed, and hold those behind it and those who are tacitly supporting it accountable for terrorism.