Panel 2, Defend the Right To Deliberate! Speak Out Against Blacklists and the Suppression of the Search for Truth

This is the edited transcript of Harley Schlanger’s opening remarks introducing Panel 2, Sept. 10, 2022, of the Schiller Institute’s Sept. 10-11 Conference, “Inspiring Humanity To Survive the Greatest Crisis in World History.” Mr. Schlanger is a spokesperson for the Schiller Institute. The full video of Panel 2 is available is here. 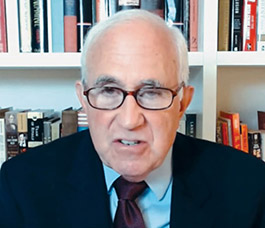 It is often said that truth is the first casualty of war. Given that this has been demonstrated throughout history, it should follow that preventing conflicts which might lead to war, or ending wars once they begin, requires an honest process of deliberation and dialogue between the parties. In the prelude to the present conflict in Ukraine, there was a prolonged effort by one side to address the question of security guarantees, a discussion which was repeatedly sabotaged by the NATO powers, whose leaders refused to even allow an honest dialogue to take place. The result is a deadly conflict which is deepening.

Meanwhile, the trans-Atlantic side continues to suppress the discussion of mutual security guarantees, insists that there be no negotiations, and is pouring in weapons and financial support to continue the fighting, with the intent—as stated by U.S. Defense Secretary Austin at the U.S. Ramstein Air Base in Germany several months ago—to weaken Russia.

Instead of dialogue, those who call for negotiations to end the conflict are placed on a hit list by Ukraine’s Center for Countering Disinformation; labelled “information terrorists” and “war criminals” and “Putin propagandists.” Some of them have been placed on a second list called Myrotvorets, which security experts have identified as a kill list. Some on the list have already been victims of assassination, including Russian journalist and activist Darya Dugina, killed by a car bomb near Moscow on August 20th, with compelling evidence pointing to Ukrainian special forces as behind the killing. In the interest of full disclosure, let me add that I am included on both lists.

This panel will begin with a summary of the EIR report on the kill list, followed by speakers who are on that kill list. You will hear that this operation is not only funded by the U.S. and UK governments, and NATO, but officials from those governments have participated in discussions and planning sessions in Kiev to coordinate the silencing of opposing voices without any of them speaking out against it.

Our purpose in this panel is not to complain, as we’re going to stick with Helga Zepp LaRouche’s intent to provide solutions. It’s our intention to change this. This must be exposed; the funding cut; and these operations shut down. Freedom of speech is one of the fundamental rights for American citizens, guaranteed by the First Amendment to our Constitution. After hearing from our panel, I hope you’ll be moved to join us in our demands that this attempt to silence opposing views, including by assassination, cannot be tolerated and must be shut down.

The keynote to this panel is going to be given by Diane Sare, who is a candidate for U.S. Senate from New York. Her opponent is Charles Schumer, who is one of the people who has argued most vehemently for funding these special operations of the Ukrainian government. Diane’s keynote address is titled, “The Best of All Possible Worlds.”