This is the edited transcript of the presentation of James Jatras to Panel 2, “Defend the Right to Deliberate! Speak Out Against Blacklists and the Suppression of the Search for Truth,” of the Schiller Institute’s Sept. 10–11 Conference, “Inspiring Humanity To Survive the Greatest Crisis in World History.” Mr. Jatras is a retired former diplomat and a former advisor to the U.S. Senate Republican leadership. The full video of Panel 2 is available here. 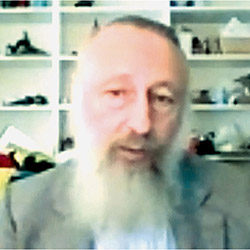 I want to express my gratitude to Helga Zepp-LaRouche and the Schiller Institute and The LaRouche Organization for inviting me to participate in this very important event.

We live in very perilous times. We are living with an increasing threat of global war because of the way the Biden administration, with the support of not only Democrats in Congress, but Republicans in Congress, has been pressing this proxy war against Russia in Ukraine, and the threats we have in the Far East over Taiwan. I don’t think we can overstate how dangerous this is.

At the same time, we have the Biden administration essentially declaring war on a huge segment of the American people, declaring them to be enemies of the people, enemies of democracy, fascists, as the President stands before a backdrop of what only can be considered a fascist scene from a movie somewhere.

Then, we have to add to that yet another ingredient with this so-called “hit list” or this identification from the Ukrainian government of people whom they designate as “information terrorists,” as essentially combatants in this proxy war. As we know, some of these lists really set up people for assassination, as we saw recently with Darya Dugina.

The worst thing about this, what we have to say as Americans is, we are funding all of this. This is our money being poured down into this effort that is then being used to turn around and designate Americans in this way and potentially set them up for violence against them by one or a number of intelligence services around the world.

More than that—and I don’t think sufficient attention has been paid to this—not only are we funding these activities by the Ukrainian government, but almost certainly, in my professional opinion as a former Senate staffer and a former Foreign Service officer, almost certainly our intelligence agencies are complicit in drawing up these lists that identify individuals who will be targetted in this way.

So, I think it’s very important. We have a big job ahead of us, if we want to recover any kind of sense of integrity in our government, to demand that these kinds of activities stop; that Congress cut off the funding for these kinds of activities; that a light is shined on whoever is behind this in our government and has been complicit with this. I say this is a big task because, at this point, there’s very little pushback from anybody in positions of power. In Congress, and certainly the Democrats, and even almost all of the Republicans are on board with these things.

So, people do need to mobilize. They need to voice their opinion to Congress, to the media, and so forth, to demand that these activities be stopped. That’s why I do want to pay special tribute to Helga Zepp-LaRouche and to The LaRouche Organization and the Schiller Institute for being not only the flagship in pushing against this, but also clearly being willing to be the lightning rod; being the people who are being singled out by this out-of-control, undemocratic, and intolerable activity by our government. I hope that people will notice the role that’s being played by this organization and will support it.