This is the edited transcript of the presentation by Gretchen Small To Panel 2, “Defend the Right to Deliberate! Speak Out Against Blacklists and the Suppression of the Search for Truth,” of the Schiller Institute’s Sept. 10–11 Conference, “Inspiring Humanity To Survive the Greatest Crisis in World History.” Mrs. Small is with Executive Intelligence Review magazine. The full video of Panel 2 is available here. 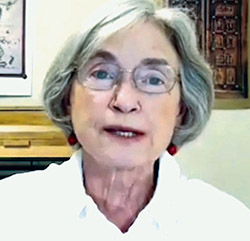 Most people in the world had never heard of the Center for Countering Disinformation at Ukraine’s National Security and Defense Council before July 25 of this year, when the news broke internationally that the CCD—its English acronym—had published a blacklist of over 70 personalities labeled “Russian propagandists,” “foreigners in the service of Kremlin propaganda,” with all that that entails.

EIR set up a task force to investigate. We confirmed that at least six of the people named on the CCD list also appear on the infamous Myrotvorets assassination list, three of them specifically on the basis of the CCD having designated them as Russian propagandists. Unlike the CCD, Myrotvorets, whose Orwellian name translates as “Peacemaker,” is quite well-known internationally. It has been investigated by the United Nations Human Rights Commission and the French Office for the Protection of Refugees and the Stateless; in 2016, it had even been called out by the G-7 ambassadors to Ukraine for targeting foreign journalists. The French report found the terrorist site to have been linked from its start in 2014 to officials in the Ukrainian Interior Ministry, the Security Service (that is, the SBU), and the Border Guards Service. Yet it still operates today, which could not happen without the acquiescence of Ukraine’s “international partners.”

But while we may not have heard of the CCD, we discovered that NATO, the U.S. and British governments, and the European Union, not only knew about it, they helped create it, fund it, work with it, and support the CCD’s move to silence international opposition to Global NATO’s attempt to become the policeman of the world.

Let me be clear. EIR is not making up accusations. We know the monstrous intent of this blacklist operation from the mouths of the CCD and its backers themselves, and we found the proverbial foreign paystubs for it as well. Not from “anonymous sources familiar with the matter” either, but from public sources.

EIR published the first results of its investigation in its September 2 issue. Here I will highlight a few key findings. As I do, keep in mind the fascist outlook of the CCD, which glorifies the neo-Nazi Azov and Right Sector brigades as “symbols of the Ukrainian struggle”—that’s what they call them—and describes Ukrainian society as “consolidating around hatred of Russia.” Let the implications of such statements sink in.

On July 14, the day the CCD released its list of international “foreigners in the service of Kremlin propaganda,” CCD acting head Andriy Shapóvalov told an international roundtable on “countering disinformation” in Kiev, that:

Shapóvalov demanded laws be changed so that “information terrorists, will have to answer to the law as war criminals.” That roundtable was funded by the U.S. State Department. One of its co-sponsors was an outfit named Civilian Research and Development Foundation-Global. CRDF-Global is not the “independent” non-profit it claims to be, but is a U.S. state-sponsored operation: founded in 1995 by Congressional mandate, funded by the U.S. State and Defense Departments, the UK and Canadian governments, and the usual private foundations, and led by a team sporting long careers in the military-industrial complex.

Minimally, two representatives from NATO, two from the CRDF-Global, an official from GCHQ (the United Kingdom’s National Security Agency), and a “strategic communications” specialist of the European Union’s External Research Service, participated in the discussion of Shapóvalov’s proposal for how “Russian propagandists” spreading “disinformation” should be treated as terrorists.

We later discovered that CRDF-Global has co-sponsored, funded, and provided technical personnel and training so often to Ukraine’s National Security and Defense Council cybersecurity and counter-disinformation operations, that you might conclude that the Security Council doesn’t operate without its OK.

Some U.S. Congressmen, such as Virginia’s U.S. Senator Tim Kaine, who wrote a concerned constituent September 7 that “I do not believe that the CCD poses a threat to the safety of Americans,” should take heed. When Ukraine’s President Volodymyr Zelensky’s close aide, Mikhailo Podolyak was questioned by the Indian daily ThePrint in July about the CCD blacklist, Podolyak aggressively defended the inclusion of representatives of foreign states, in what he called “military lustration lists.” He called these “absolutely justified,” and then he said:

I will repeat once again because it’s important. These people … are a kind of instrument of war. Ukraine is obliged to limit the influence of such people.

The CCD has functioned under international direction since it was formally launched in April 2021 at a meeting with the ambassadors of nine countries (including all of the G-7 ambassadors) and the heads of the European Union and NATO offices in Ukraine. Andriy Yermak, the head of Zelensky’s Office of the President, told those present that the CCD was to function as “an international hub” for “countering disinformation.”

We see the full media picture of Ukraine around the world and inform the National Security and Defense Council about it…. We hand over everything useful and most interesting that we find to the SBU.

Even the Washington Post admitted on Sept. 8 that the SBU, Ukraine’s infamous Security Service, has a special unit to liquidate opponents.

[The CCD] collects evidence of hate speech against Ukraine for use in international courts.

I do not have time here to detail the initial history presented in EIR’s dossier on how the U.S., NATO, and the United Kingdom moved in like gangbusters after the 2014 Maidan coup to instruct Ukrainian officials on how to organize “strategic communications” and run “counter disinformation” operations. Suffice it to say that foreign control over Ukraine’s censorship operations did not start with the CCD.

But when you look at these operations, it becomes clear that Ukraine is being used as NATO’s proxy to crush global opposition to NATO worldwide, as well as its proxy for war against Russia. Last March 28, the CCD issued a document titled “Information Terrorism: A Crime Against Humanity …” This is detailed at some length in EIR’s dossier. The document argues that,

The international community must officially recognize information terrorism and declare Russia an infoterrorist state. Infoterrorism must be equated with actual terrorism and requires appropriate measures to counter it.

The CCD demanded the international community agree that anyone involved in any way whatsoever with so-called “infoterror” be treated as an “information terrorist.” The CCD also asserted that it is “obligatory to designate a list of individuals sponsoring information terrorism,” who are then to be sanctioned.

Remember, the people on the CCD’s July blacklist are charged with being “infoterrorists” for saying such obvious things as “sanctions against Russia have backfired against other parts of the world”; or, as was the case with Helga Zepp-LaRouche, specifically for organizing “an international discussion on the new architecture of world security and the threat of World War III.” That makes Helga a “war criminal”?

There was enough international blowback against the CCD for its blacklist, that it removed it from its main website August 11—although it is still visible from its Telegram channels. The operation, however, is proceeding apace.

On September 2, the CCD and the National Security and Defense Council of Ukraine reported that they had just held another international roundtable, this one a two-day conference on “Combatting Disinformation under Conditions of Military Operations.” This confab was attended by representatives of 24 nations. They listed 18 speakers, 15 of them from among their “international partners.” The whole gang was there: the U.S. Embassy’s Public Relations Officer, the Chargé d’Affaires of the French Embassy, Germany’s Political Affairs Officer, the head of NATO’s StratCom partnership with Ukraine, etc.

Shapóvalov repeated the CCD litany: international law must recognize “infoterrorism” as a crime, and anyone committing such a crime must be designated an “information terrorist” and subjected to measures such as are applied to actual terrorists. The CCD claims all parties present agreed.

If thinking and dialoguing about policy—what we are doing here today—is now to be considered “terrorism” to be silenced, we are way beyond George Orwell’s 1984. This operation must be shut down.