This transcript appears in the October 14, 2022 issue of Executive Intelligence Review.

Did U.S./NATO Blow Up the Nord Stream Pipelines?

This is the edited transcript of the Col. Black’s presentation to the Oct. 6, 2022, press conference sponsored by EIR, titled “We Will Not Be Silenced! Speaking Truth in Times of War.” He was the head of the U.S. Army’s Criminal Law Division at the Pentagon, a Virginia State Senator, and is a decorated Vietnam War veteran. Subheads have been added.

The video of Col. Black’s address is available here.

The video of the entire conference is available here. 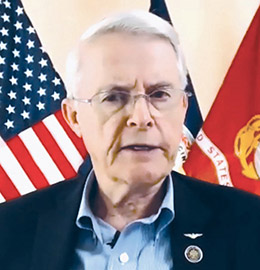 I think most of you are familiar with me by now. I’m Senator Dick Black of Virginia, and I’m a retired colonel. I fought in Vietnam in very, very bloody combat. I was wounded in Vietnam. And then later I was a JAG officer; finally served in the Pentagon, where I advised the Senate Armed Services Committee. I testified before Congress and had my division prepare the executive orders that went to the President of the United States. So, I have a background and I’m a patriot. I’ve risked my life hundreds of times for the country.

But I am very concerned about the directions of American foreign policy.

What I want to talk to you about this morning is something that was very dramatic, that just recently occurred, and that was the explosive detonations that destroyed the Nord Stream 1 and 2 [gas pipelines]. There are only a few nations that have the means of carrying out a military strike of this technical complexity.

I was a career prosecutor, and so I looked at these things from the eyes of a prosecutor. You look at motive, means and opportunity. So you say, “Well, who had the means to destroy the pipeline?” Now, Ukraine does not have the means of doing it on its own, not unless somebody walked them through it. So, I think you can write out Ukraine.

Now who had motives? You have to find somebody who’s got the motive. Certainly, there were nations that did have the motive—Poland, for example, might be one. But there was no nation that had a clearer motive to destroy the pipelines other than the United States. Only the United States had the means, the motive, and the opportunity to destroy this vital infrastructure. President Biden publicly declared his intention to destroy Nord Stream 2, back on February 7th. He was speaking at a joint news conference with German Chancellor Olaf Scholz. And Biden said, and I quote: “If Russia invades again, there will no longer be a Nord Stream 2. We will bring an end to it.” The reporter was a little bit startled by this revelation; she asked incredulously, “But how will you do that exactly, since the project is in Germany’s control?” And Biden responded, “I promise you; we will be able to do it.”

This was quite a shocking thing to say. Even though it was a German pipeline, Germany being probably our closest military ally in the world, and here’s Biden saying, “we’re going to destroy the Nord Stream 2 pipeline.” And you have the Chancellor [with Biden], the head of the nation that has spent many years and fortunes to construct this thing, which will have an incredibly positive impact on the nation of Germany. And yet, he’s standing there, silent, as President Biden is saying, in effect, that if Russia comes across the border, that he will destroy the Nord Stream 2 pipeline.

Now, there are other nations that did have motive, as I mentioned, Poland. But the way that NATO operates, without prior approval from the United States, there is no nation in NATO that would move forward with an attack that would have such profound ramifications on Europe. Remember, NATO is essentially a creation of the United States. The organization is peppered by American top officials and even the Supreme Allied Commander Europe is always an American. So, I do not believe that any nation would carry out an attack of this sort, without the prior permission of the United States.

So in conclusion, with that we have no explicit proof, no admission other than the President’s own comments. But just look at the likelihood; I’ve dealt with thousands of criminal cases. Typically, you’ll call in criminal investigation division, the police, the FBI, the British bobbies, and you review the evidence, and I would often comment, because I would have these people gathered around me, and I’d say, “OK, looking at this, I’ve got a hunch: This is where we need to look.” And in most cases, I was correct. In this case, my hunch is the United States did it. The motive for it is quite clear.

What’s happening right now, in Europe, is that the European people have never really been consulted about the idea of sanctions on Russian products. Now, when you sanction Russian products, you’re cutting off the market for Russia, of course, but in the process, you’re cutting off all of the vital natural resources coming into Europe, and you’re destroying the economy of Europe.

So what’s happening today is that as winter approaches and there’s a greater and greater demand for Russian natural gas, the people of Europe are becoming very restless. There are populist movements springing up: in Sweden, in Italy, in the Czech Republic, in Hungary, and in Germany. And I think that one of the objectives for the U.S. was [related to] these protest movements [that] are placing greater and greater pressure on the countries of Europe to back off from the sanctions. And I think, quite logically, it may have been one U.S. objective to say, “Let’s just destroy the pipelines, and that way the European people can rant and rave as long as they want, but if they say turn on the pipeline and restore the gas, it can’t be done.” And so it takes some of the steam out of the protest movements.

Anybody who thinks the CIA would not do something of this nature, simply does not understand the CIA. They don’t function in the best interests of the American people. Their aim is to serve the “boys from Davos,” as I call them, groups like the World Economic Forum, and all the other globalist organizations that are linked together and have enormous profits at stake in these wars. By breaking up Ukraine, by creating the war situation and knocking the socks off the Ukrainian economy through the war, they are in the process right now of rushing in to buy up state-owned properties of Ukraine, and buying them up at a nickel on the dollar. The Ukrainian people are impoverished. Outside globalists, oligarchs, have the money; they’re buying things on a fire sale. They want to do the same thing with Russia.

And so I am most uneasy that the Central Intelligence Agency, DOD, and the State Department have coordinated to destroy those pipelines. Like I say, that’s speculation, but I think it’s a pretty good guess.

As winter approaches, the people of Europe are beginning to wake up. I hope that they realize they’ve been taken on a wild venture, which is not only murderous for the Ukrainian and the Russian people, but it’s suicidal for at least the economy of Europe. And I hope that the American people will also begin to recognize that like so many of these military endeavors, this was a setup from the beginning. Yes, the Russians did attack, but the war had been planned [against Russia] for many years and it had been going on seven years before the Russians ever crossed the border.

So I think there is there’s going to be a lot of news that will come out of Europe over the winter. And I hope, perhaps, the Europeans will wake up and say, “We’re finished with this; we don’t need war. We’re risking a nuclear war. And it is time to restore some sanity in Europe.”