This article appears in the October 28, 2022 issue of Executive Intelligence Review.

THE DENIAL OF THE RIGHT TO VOTE

Oct. 23—Many people who are old enough, remember the seemingly unwinnable fight waged by the American Civil Rights Movement to pass the 1965 Voting Rights Act into law, which removed the unlawful barriers preventing black enfranchisement in the South. The civil rights victories included the banning of poll taxes, so-called “literacy tests,” and other measures which were used to prevent African Americans from exercising their right to vote. The Smithsonian’s National Museum of American History reports one such “literacy test”: “In Mississippi, applicants were required to transcribe and interpret a section of the state constitution and write an essay on the responsibilities of citizenship. Registration officials selected the questions and interpreted the answers, effectively choosing which applicants to pass and which to fail.”

Today, a similar fight is being waged in New York by Diane Sare, the LaRouche independent candidate for U.S. Senate running against Sen. Chuck Schumer.

As a result of filing over 66,000 signatures of registered voters in New York, which were gathered over a period of six weeks as mandated by changes in election law passed by the New York State Legislature in 2020-2021, Sare became a certified candidate for the position of U.S. Senator in New York. As a result of the changes made to election law, the hurdle of achieving ballot status had been increased from 15,000 signatures to 45,000 signatures for all independent or non-major party candidates, while Democratic or Republican candidates running for statewide office only had to obtain the previous 15,000 required. For comparison, some states in the U.S., like New Jersey, only require 800 signatures from registered voters to file as an independent candidate in the state. 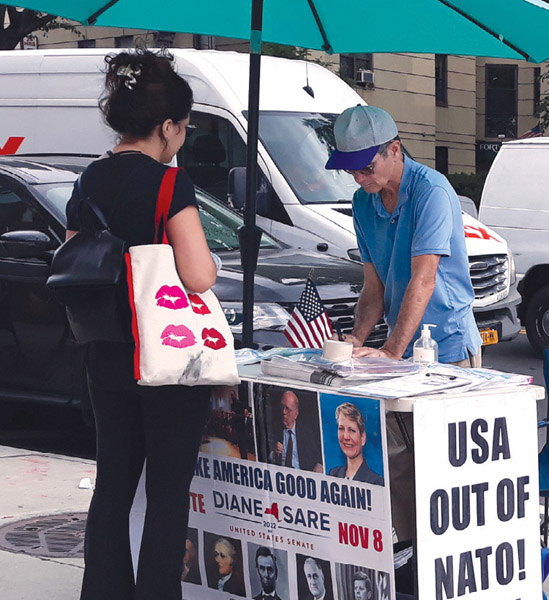 EIRNS/Sylvia Spaniolo
Petitioning for the only candidate campaigning to stop the U.S./NATO push for nuclear war, July 2022.

Despite meeting this absurd and onerous threshold, Diane Sare is now being excluded from any participation in the debate between Sen. Chuck Schumer and Republican candidate Joe Pinion. On October 11th, Spectrum News, the major local news network in New York State, announced that it would be holding a debate between Sare’s opponents, but Diane Sare would not be invited to participate. Sare’s campaign organizers contacted Spectrum’s New York State Political Director Bob Hardt regarding this, who explained to them that Sare would not be invited because she had failed to receive enough support from voters in the state. According to Hardt, Sare failed to receive at least 15% support from two polls in the area. The problem with this rationale, however, is that the three polls of Marist College, Siena College, and Emerson College, which are used by Spectrum News as criteria for who to invite, did not even bother including Diane Sare’s name as an option! Her campaign issued a fact sheet on the exclusion process which has been widely circulated.

EIRNS/Kynan Thistlethwaite
Sare leads a rally outside the office of pro-war Senator Charles Schumer in Manhattan.

With Sare’s exclusion from the debate between Sen. Schumer and Pinion, American voters are being denied the chance to reject the plunge by the Anglosphere into a thermonuclear conflict with Russia and China. Sen. Schumer has been the leading ally of the Biden Administration in providing arms and weapons to the Zelensky regime and his fascist Banderite fighters, who are holding the Ukrainian population hostage and threatening to plunge the world into a third world war. Candidate Sare has spoken against this policy to religious and civic groups throughout New York State, making clear to voters that the United States must support a negotiated settlement between Russia and Ukraine, recognizing the red lines which President Vladimir Putin identified in written treaty proposals as late as December of 2021.

Her campaign organizers have reported the resonance of this truth-telling with voters across the political spectrum. The New York State Board of Elections demanded that she not be listed as an independent on the ballot, and so she chose to be listed as the LaRouche party. Sare in all her speaking engagements has presented the urgent need for a new, inclusive world security and development architecture in order to avoid war and serve the interests of all nations and people around the globe. She has joined Helga Zepp-LaRouche in several international conferences, offering hope to people outside the United States by demonstrating a quality of leadership many people remember from the presidential campaigns of Lyndon LaRouche.

It should also be noted that both Diane Sare and Helga Zepp-LaRouche were included in the infamous kill-list by the Center for Countering Disinformation in Ukraine. According to the CCD, the crime of Sare is that she stated that “sending more and more weapons to Ukraine was insane and could lead to nuclear war.”

Scott Ritter, an outspoken former U.S. Marine Intelligence Officer and UN Weapons Inspector, has spoken of the need to have Sare present on the debate stage, in an interview conducted with him and Sare by Cynthia Pooler:

“The single issue that she [Sare] raised to get on this list [the ballot], the single issue that motivated 66,000 New Yorkers to sign their names to a petition, was the danger of nuclear war,” Ritter insisted. “And here we are today, on the brink of a nuclear conflict.... Right now, there’s a NATO nuclear exercise taking place that is literally practicing to drop bombs on Russia. Now, Russia responded with their own nuclear weapons exercise that is literally practicing to drop bombs on NATO. The difference here is that Russia does not have a doctrine of preemption; the United States does.... It’s imperative that we get people like Diane put in positions of authority where they can bring this issue to the forefront.”

“I’m not a political person, and I can’t sit here and say, ‘I endorsed Diane Sare for Senate.’ I can’t do that. I wouldn’t endorse anybody for Senate. But I’ll tell you what, I endorse your presence on the stage. I endorse your message. I endorse the fact that you alone seem to understand what’s important to this world, and that is having a future for our children, for our grandchildren, and their children and generations to follow, in the future that’ll be denied to everybody if we have a nuclear conflict. I want you on that stage, Diane. I want you speaking out on behalf of the people of New York, and it’s just a darn shame that they’re silencing you in this matter.”

This is the importance of Diane Sare’s campaign not just for Americans, but for the world as a whole. The exclusion of Sare from a major televised debate is in fact a human rights violation, a denial of the democratic right to vote.