Being Mere Spectators is No Longer Viable

This is the edited transcript of the presentation of María de los Ángeles Huerta del Rio to the Schiller Institute’s Oct. 27, 2022, International Seminar, “For World Peace: Stop the Danger of Nuclear War,” the second seminar of current and former elected officials of the world. Señora Huerta has been a professor, social campaigner, and a Congresswoman. She spoke in Spanish from Conference Room E of the Chamber of Deputies in Mexico City. The presentation title and subhead have been added. The video of her presentation is available here. 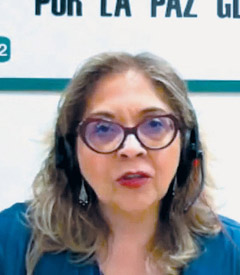 Thank you very much for your important attendance in this forum. I would also like to thank Helga Zepp-LaRouche for the opportunity to participate again in this realm.

I greet you from Mexico. I think that after this diagnosis, we are all quite aware that we want to transform the world, which is threatened today with the imminent danger of war. And that we have to stop the terrible world economic disaster occurring today as a consequence of many unresolved problems.

Let me say that if we wish to create a truly different world, in which it’s not just a handful of people who own practically all material and natural resources that really belong to us all; if we want to see a profound transformation that really shows that we as humanity learned the lessons left by the two world wars in the 20th Century, the global COVID-19 pandemic, and of course, the current threat of nuclear war described by Helga due to the war between Russia and Ukraine, which has brought us this final opportunity to change course in the world; then we need to do something that will guarantee our right to life and happiness.

We cannot continue to be mere spectators of a possible planet-wide disaster. We must transform ourselves right now into active citizens of a world that we want, the world that we must change. I believe this is the most important thing right now: A collective awareness that being mere spectators is no longer viable. It never was, but far less so at this time.

We believe that in order to achieve this radical transformation away from devastation and inequality, moments in which our peace, integrity, and world security are threatened, all of us as human beings, as Helga has emphasized, need to act, to get moving.

Citizens of the World for a Global Initiative

My specific proposal at this time is that we build an organization for global, collective action as has been previously mentioned, because we need to be already a force with a determining influence in the international dialogue. We must also establish a presence that will help to define peaceful solutions and reorient the economic and security architecture, as has already been mentioned.

Our initiative presented here, which was discussed in the previous October 7 seminar, and which at this time I am simply summarizing for you, is: First, we have to convene a World Day of Debate and Reflection. Not merely national citizens’ mobilizations that we can organize and put forward, but we need to think globally, as citizens of the world, of a single initiative to address this danger.

We also need to define specific policies to help us define the policy alternatives. And amongst us all, to design some kind of global agenda that can be the basis for this global action plan. Take these points that have been discussed in our agenda, or to be included in this planetary agenda for discussion and debate, we then would aim for the next workshop, for which our friend Helga would also bring together social and political analysts and students of the world to propose the following: To convene a World Day of Debate and Reflection; to consolidate citizen actions necessary to stop this potential danger of nuclear war.

We need to motivate the parties involved in this great conflict between Russia and Ukraine, by declaring a truce, as the Mexican President had already proposed. A truce during which the necessary dialogue can be carried out to establish the conditions of collaboration and transformation that will set in motion a new world order.

The second point of this agenda would be to define a new system for world economic development, a new way ahead, a moral and humanist economic model based on an economic framework as defined by our President here in Mexico. A moral, humanist model which increases equality among the world’s nations and populations.

Third, as part of our agenda to design a new international security architecture, as was very well stated by Helga, which will truly guarantee world peace, and will stop any process of nuclear, chemical, and/or bacteriological war that endangers the human species.

The fourth point would be to propose a new world energy model to guarantee our successful survival based on the concepts expressed in the Manifesto for Life, for an Ethic for Sustainability [Eduardo Galeano, et al., 2002], which will guarantee that all countries, including the poor ones, will be able to develop adequately.

And finally, the consolidation a project for a communications work plan as a strategy to reach out to media that will be able to aid us in countering hegemonic narratives which spread internationally today, attempting to legitimize the global powers that presently exert their hegemony over the world, a narrative that proposes its own narration of events and does not allow us, as citizens of the world, to advance. So, we need to engage in a great communications agenda with a specific work plan, which will lead to a global mobilization and allow us to link up with different leaders and populations. This will bring about the global possibility of collaborating on the agenda that we propose. I will conclude here with this proposal.

I hope I have been able to encapsulate what has already been said in previous seminars. And may this seminar bring about not only a more generalized awareness of this global problem we are addressing, but also establish our active presence and eagerness to participate and help stop this urgent danger we face. That’s what I would like to tell you here, from Mexico, as well as greet all of you in the various continents. Thank you very much, Helga.