This article appears in the November 4, 2022 issue of Executive Intelligence Review.

Oct. 30—We present here a selection of important citizen-based initiatives and reports of support for those initiatives now erupting in many nations, including an offer to host a peace conference in Arizona, from U.S. Congressman Paul Gosar. Some were presented at the just concluded October 27 conference, “For World Peace: Stop the Danger of Nuclear War.” Many more initiatives are expected.

Leaders and people of the German city of Stralsund have made a bold offer to host peace talks between Russia and Ukraine. This “Stralsund Peace Initiative” was taken at a town meeting Oct. 20, at which citizens decided on this measure by a large majority. The Bürgerschaft—the City Council—instructed Mayor Alexander Badrow (CDU) to send a letter to Chancellor Olaf Scholz (SPD) as soon as possible, to let him know “that the Stralsund City Hall is available for immediate peace talks,” according to a report from Norddeutscher Rundfunk, North German Radio (NDR).

The support for this initiative crosses all party lines, in the name of a kind of “people’s bloc” for what the initiative’s supporters regard as in the common interest of all. Their declaration states clearly that “There is nothing more important than peace in our land,” and it calls for action to “finally bring the warring parties [in the Ukraine conflict] to the negotiating table.”

A citizens’ alliance, Bürgerschaftsbündnis für Stralsund, Citizens for Stralsund, which led up to the initiative, joined with leaders from the parliamentary groups across the political spectrum, the CDU/FDP (Christian Democrats and Free Democrats) and the Linke/SPD (Left and Social Democrats). The initiative, also approved by the Green Party and the Alternative für Deutschland (AfD), stated, “Due to the Russian invasion of Ukraine and the related measures of the Federal government, the people of our country are afraid of a third world war.”

This united action followed a rally in the market square of the Citizens for Stralsund on Oct. 19, at which Mayor Badrow had already promoted the idea of peace, saying that, “solutions must now be found to return to peace.”

Speakers at the rally expressed diverse views, some calling for “immediate peace,” others for measures such as, “immediate resignation of the government in Berlin.” One said, “When they are gone, things can only get better.” Others blamed the West for the continuation of the warfare, portraying Russia’s military operation as a measure of self-defense.

There was anger expressed that the West is behind the sabotage of the Nord Stream pipelines. The German terminus of the lines is at Lubmin, southeast of Stralsund, in the state of Mecklenburg-Vorpommern. Stralsund, a city of 60,000 people, is located right in the center of this Baltic region that has closely cooperated with Russia for decades.

Stralsund has another special distinction among the many eastern German towns now holding weekly demonstrations and issuing statements. Stralsund is an historic Hanseatic League city, which, as the new motion for hosting negotiations states, has a “great history of creating peace.” This reference is to the role it played in ending a war between Denmark and the Hanseatic League in 1370, by means of what became known as the Stralsund Peace.

Karl Krökel delivered this message to the Schiller Institute’s Oct. 27, 2022, International Seminar, “For World Peace: Stop the Danger of Nuclear War.” He is the head of the Metallurgy Association of Dessau, and Chief Master Craftsman of the district’s craftsmen’s association in Dessau-Roßlau, State of Saxony-Anhalt. In June of this year he, together with other craft leaders of the region, started the initiative, “Craftsmen for Peace.” The video of his presentation is available here.

My name is Karl Krökel. I am district craftsman of the district craftsmen’s association Dessau-Roßlau (Anhalt). I have been self-employed for 33 years. On June 14, in a protest action, we addressed the federal government. We sent a letter signed by the head craftsmen to the federal government, under the motto “Craftsmen for Peace,” in which we laid out our demands: “Stop the sanctions policy! No arms deliveries to Ukraine! Peace policy instead of warmongering!”

This is more relevant than ever. Since then, the situation has been aggravated enormously. The war zone has been expanded by the act of sabotage [of the Nord Stream gas pipelines] in the Baltic Sea. The livelihoods of entire generations are in danger. 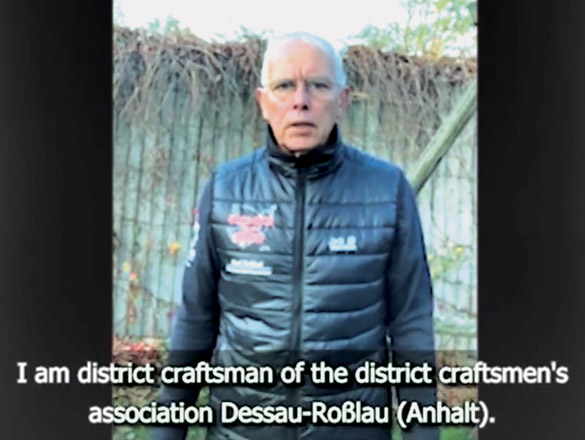 We are standing up against this. Nor do we want to continue to be drawn into the conflict as a warring party. And we want to leave NATO. This security policy allegiance towards the U.S.A. must come to an end. We want a European peace order. We, as a population and the economy, have to carry the burden of this senseless economic war, triggered by the EU. We are fighting with all our might against high energy prices, where, as a result, the lights will go out for tens of thousands of enterprises, and the work of generations—above all, also in the future—will be destroyed completely senselessly. This represents for us a huge threat. It is about our life as independent craftsmen of our citizens. That’s why we’re taking to the street and continue to fight.

On Oct. 25 Representative Paul Gosar (Republican of Arizona) sent letters to the Presidents of Russia and Ukraine, calling for diplomatic talks to begin and offering Phoenix as a venue. Gosar tweeted that day,

If there is not one leader in our politics or our military who will attempt to end this war without unthinkable global death and destruction, then I must. This is my letter to Vladimir Putin and Volodymyr Zelensky…: 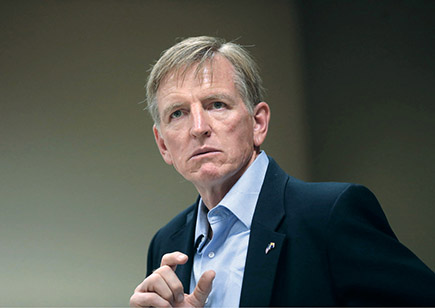 CC/Gage Skidmore
U.S. Congressman Paul Gosar has offered his state, Arizona, for peace talks to end the war in Ukraine.

The text of his letter to Putin and Zelensky reads:

I’m writing to each of you, or your delegates, with an invitation to come to Phoenix, Arizona to engage in peace talks. I’m not a diplomat. I’m a mere member of the U.S. Congress. But I’ve seen enough death and destruction among your countries. It’s untenable. I’ve gone from troubled about the lack of peace efforts to now feeling compelled to act.

The United Nations’ estimates place civilian casualties at over 14,000. Countless more have been displaced or had their homes and communities destroyed. As if this wasn’t problematic enough, the duration of this conflict has been draped with nuclear undertones. From fighting around active nuclear energy infrastructure, to indications or direct statements of unconventional military responses being on the table, this is no longer just a war between your nations. Months of escalation in weaponry and rhetoric endangers not just the citizens of your nations, but also the world.

A pathway to peace is long overdue and I write to offer a means to pursue this important goal. Unfortunately, many statements and actions by global political and military leaders are averse to achieving peace. Inasmuch as I am a non-combatant peace activist, I have a recognized right, pursuant to the United Nations Peacemaker program, to seek mediation through local efforts. I do so with the expectation of administrative and other support through the U.N. to set up the framework for peace talks.

Peace must prevail but does not currently seem to be an option. Therefore, I’m inviting you both to Phoenix, Arizona where we can begin conversations to deescalate nuclear tensions, terminate the war, and end the death and destruction plaguing both your nations. The location, Phoenix, Arizona, is far enough away from the conflict, and away from the entities that are currently encouraging more war, to be a productive location.

Municipal officials in France have issued the following statement in support of the Stralsund Initiative.

We, the Mayors of France, support the elected officials of the German city of Stralsund and their efforts to convene talks between Ukraine and Russia.

War is a calamity that depends on the will of men. We know that it is possible and necessary for the nations of Europe to show humanity again and to stop the military escalation. The life of every woman and man in Europe obliges us to do so.

History too often sees conflicts end in tears and regrets. In the age of the atom, forgiveness and consideration of the interests of both sides must take precedence over bellicose words and steps unaware of their consequences.

An agreement on security and stability in Europe, supported by a policy of mutual economic development, is not only legitimate but necessary.

As elected representatives of the people, it is our duty to preserve peace above all else. The Stralsund City Council is today setting an example for this, across the political spectrum, including the so-called extremes.

We give our public support to its decision of October 20, 2022, and call on France to accompany the dialogue between the belligerents to the negotiating table.

We remain at the disposal of the authorities concerned to provide them with our support and assistance.

Tom Gillesberg, the Chairman of the Schiller Institute in Denmark, is on the Nov. 1 ballot for Parliament from Copenhagen, campaigning for shifting from sending weapons to Ukraine, to pushing for peace negotiations, and de-escalating the nuclear threat.

Gillesberg has run in all but one parliamentary election since 2005, on this platform, with a significant impact, in opposition to the ruling political factions which have made Demark a loyal participant in NATO’s wars in Iraq, Afghanistan and Libya. Since 2015, Danish troops have been training Ukrainian forces, and Denmark has been sending weapons to Ukraine.

In this context, despite the warhawk effort made to black out his campaign, Gillesberg’s candidacy has had an important impact, in particular through an operation putting up 500 dramatic posters in Copenhagen, with the slogan, “Stop NATO’s Wars: Cooperation—Peace Through Development.” The placard features flags of nations working together—Denmark, Ukraine, Russia, China, India, and the U.S., along with an image of a construction project in Africa.

At least 140 posters were removed by unknown vandals, which vandalism is now the subject of a police investigation. The national radio program, “The Independent,” interviewed Gillesberg on Oct. 26. Gillesberg said that he is not the victim of the vandalism, but Danish democracy is. His campaign is challenging the narratives used for public opinion control to back warfare, and to impose hardship in energy and through hyperinflation. 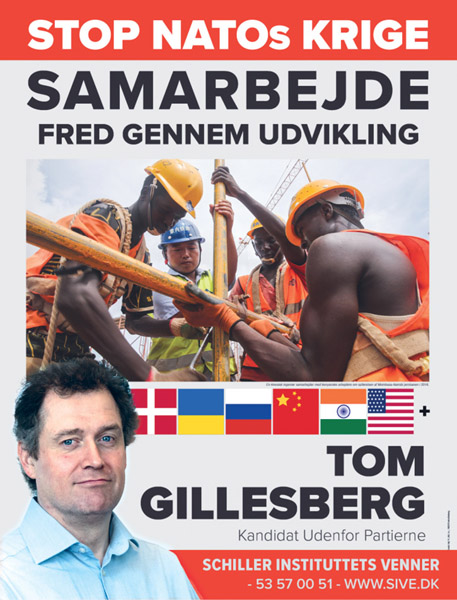 He has consistently sounded the alarm over the war danger, asking why is there no one questioning who sabotaged the Nord Stream pipelines near the Danish island of Bornholm? His campaign statement states: “Do you dare pose critical questions, or remain silent, and lose both welfare and risk nuclear war?” and, “Is it Russia’s fault that there is an energy and inflation crisis?”

What adds force to Gillesberg’s warning is that he is well known for his past campaigns for Denmark to change course on foreign and economic policies. Gillesberg and his posters have become a special institution in Danish politics since his first campaign in 2005, when he put out the poster slogan, “When the Bubble Bursts … New Bretton Woods,” warning about derivatives and hyperinflation, as has come to pass. He has had signature poster/policy concepts for each campaign since. In 2015 it was, “Win-Win with BRICS—Not Collapse and War.” Now, Tom Gillesberg is a crucial voice on the European stage. 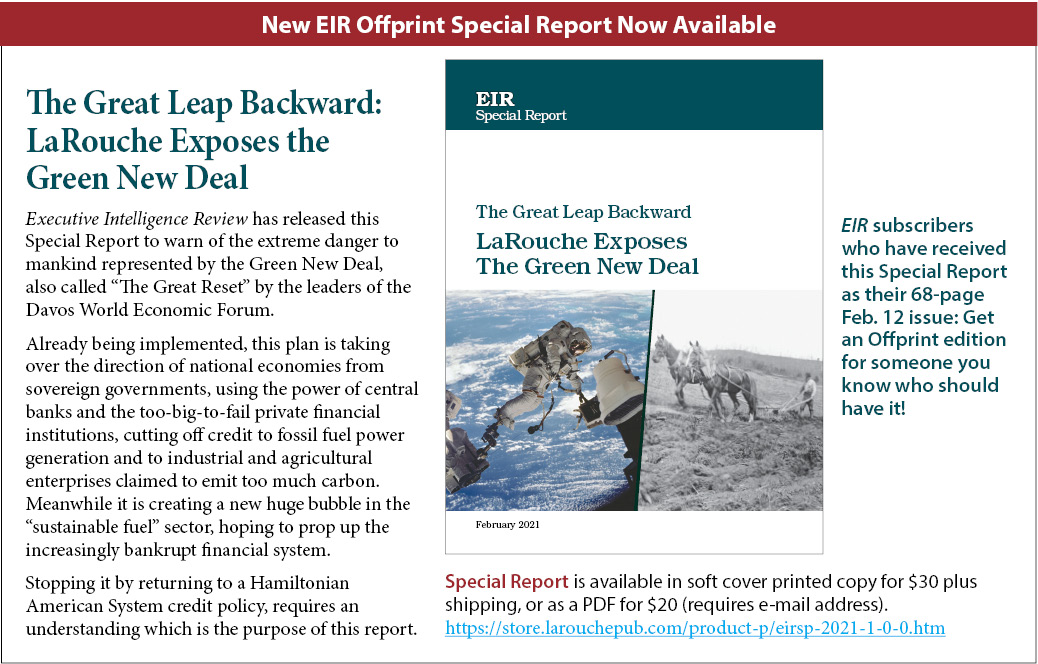