This is the edited transcript of remarks by Benjamín Robles Montoya, federal Congressman for the state of Oaxaca, Mexico, to the Schiller Institute’s Oct. 27, 2022, International Seminar, “For World Peace: Stop the Danger of Nuclear War,” the second seminar of current and former elected officials of the world. Sr. Robles is a teacher and an economist. He has represented the state of Oaxaca since 2018. He spoke in Spanish from Conference Room E of the Chamber of Deputies in Mexico City. 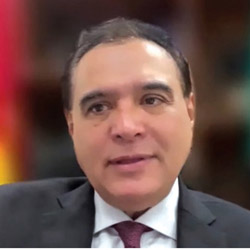 My greetings to Mrs. Helga Zepp-LaRouche, the founder of the Schiller Institute. I also most respectfully greet the distinguished public figures from the various countries who are with us today. Greetings to all, friends from around the world! We join you in this battle, if you’ll forgive the expression, which must be waged for there to be peace and to stop the danger of nuclear war.

I would also like to thank Dr. María de los Ángeles Huerta, and I of course reiterate, to the head of the Schiller Institute, for inviting me to participate in this seminar, “For Global Peace: Stop the Danger of Nuclear War.” Because it is evident that events—for some they are recent, for others already eight months are more than enough, between Russia and Ukraine—are not an exclusively military issue, but in my view also have to do with various causes and consequences which are an assault on humanity itself. That is why I want to state, for all of you who are attending this seminar, whether remotely, virtually, or in person, I would like to give you a warm welcome to this Honorable Chamber of Deputies of Mexico.

Friends, the issue of Ukraine and other wars is, if you will allow me to state my view clearly, the necessary corollary of a crisis which is disintegrating the world’s finances and economy. A crisis caused by an imperial power which controls the great monetary flows, the ups and downs of real or fictitious money, to channel them to increase their profits, to preserve their political power, but at the expense of causing poverty, at the expense of destitution, the expense of an arms race, the physical and emotional destruction of the population of very many countries, and of course as the instrument of the endless growth of debt.

In my view, this is a central problem that we have to resolve immediately, because those monetarist mechanisms that you know so well cannot be allowed to continue. That power which has embedded itself in local institutions, the institutions of our planet, where we see how they deploy national or private armies, and how they control production and trade of raw materials, through corporations or networks of banks—which, of course, never lose. Those networks of banks that never lose if interest rates rise, and that win—if interest rates drop—they also win. So that they keep winning, even illegitimately. And I mention this because, in that sense, inflation, recession, are phenomena which in my opinion are induced in order to ensure that they have the interest rates and the supply of liquidity required for their survival, and to keep holding a tyrannical power which imposes conditions of poverty and austerity on millions and millions of human beings.

That is why I think it is time to raise our voices, and in an efficient way that will allow us to produce great transformations in the world.

Here in Mexico, as most of you surely know, the President of the Republic, Andrés Manuel López Obrador, has totally clearly identified this kind of problem. That is why he recently called for an immediate end to the war between Ukraine and Russia, and proposed an urgent reorganization of the United Nations, in order to put it at the service of humanity’s interests. I also think that nations’ governments should support that goal. Not to see how the involved parties can be sanctioned, but how we can join together to stop this enormous danger.

For all of these reasons, friends, I would like to submit for your consideration the formation of a group of legislators who represent everyone on all continents, if possible of all nationalities, to enter into dialogue directly with the governments of every country interested in world peace, in order to implement the proposal of a new United Nations, which Mexican President López Obrador has called for, as well as a New Economic Order that incorporates the new principles in favor of humanity such as “without corruption there is growth” and “for the good of all, the poor come first.” Friends, it has fallen to us to live at a time of great challenges and also of great opportunities, and I believe that we cannot squander the opportunity. We cannot say goodbye to the hope of having peace and having development for the 7.5 billion human beings gathered in 206 nations and other territories. That is why I hope that the work that is presented and approved today, will become reality as soon as possible, for the good of all nations.

I am very proud to join you in this seminar. From Mexico City, I welcome all of you. We are very happy to join with you, from here in the Chamber of Deputies, in this great crusade for peace.