The following is an edited transcript of Richard A. Black’s speech to the Oct. 25-26, 2022 meeting in Moscow hosted by the National Committee on BRICS Research, Russia, and titled,“International Scientific and Practical Conference: ‘Scientific-Technological and Innovative Cooperation of BRICS Countries.’” Mr. Black is the Schiller Institute’s representative at the UN in New York.

I would like to thank the National Committee on BRICS Research of Russia for inviting the Schiller Institute to participate in this historic conference.

At a September 2022 technology seminar in Beijing, Prof. Peng Xianjue of the Chinese Academy of Engineering Physics said:

Fusion ignition is the jewel in the crown of science and technology in today’s world. Being the first to achieve energy-scale fusion energy release will lay the most important milestone in the road to fusion energy for human beings.

Professor Peng announced that China will create continuous fusion energy by 2028 for use in a hybrid fission-fusion power plant. It is estimated that by 2035, reactors will be able to generate energy directly for the electric grid from the fusion process.

Thermonuclear fusion energy, which in fact is similar to how heat and light are produced deep within our star, the Sun, is an example of such nature-like technologies. Potentially, we can harness a colossal, inexhaustible, and safe source of energy.

President Putin stressed that Russia is prepared to extend “expansive and equitable cooperation” with nations globally, to achieve the breakthroughs in the science and engineering required to produce vast amounts of electricity for global needs.

On-going research and development to bring thermonuclear fusion on line in the immediate future—by and for the BRICS nations and partners—makes this topic-area central in addressing the subject of today’s conference: scientific, technological, and innovative cooperation. If we add to this picture India’s leading work in developing a thorium-fueled reactor, and South Africa’s historic role in fission reactor design, it becomes clear that BRICS and the Global South stand now on the frontiers of world science in the service of the alleviation of global energy poverty.

In this report, I will briefly discuss the extent of worldwide energy deficits; present some key principles of physical economy from American scientist Lyndon LaRouche; consider the nature and source of fusion fuel; and finally, expose the lying character of the pervasive ideology, perpetrated in Academia and among governments in the West, known as “Limits to Growth,” or the alleged “scarcity of resources.”

My colleague at Executive Intelligence Review, physical economist Richard Freeman, has calculated the immense current energy deficits in the Global South, and the requirements to rapidly bring that area up to the U.S.A. standard of per capita energy consumption. 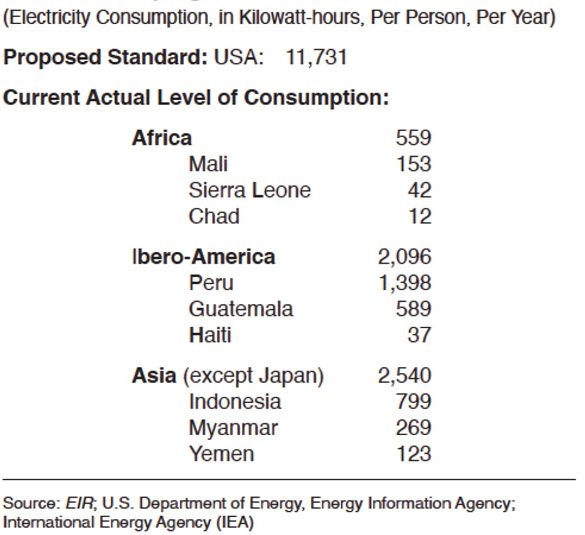 Look at Figure 1. Current energy use per capita in Asia (excluding Japan) is one-fourth that of the U.S. Latin America’s is one-fifth, and Africa’s energy use per capita is one-twentieth the American level—this technology deficit is the cause of famine, of unchecked disease and pandemic, and of social disintegration. 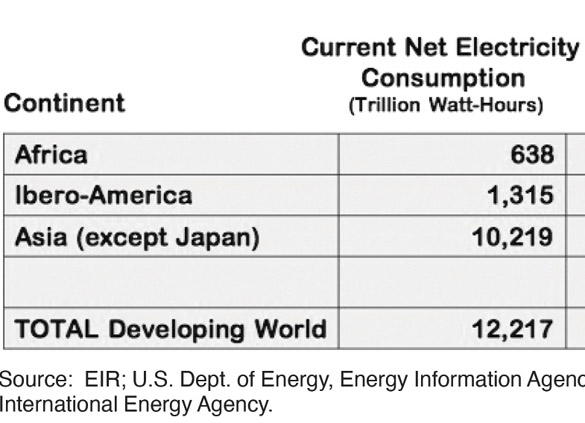 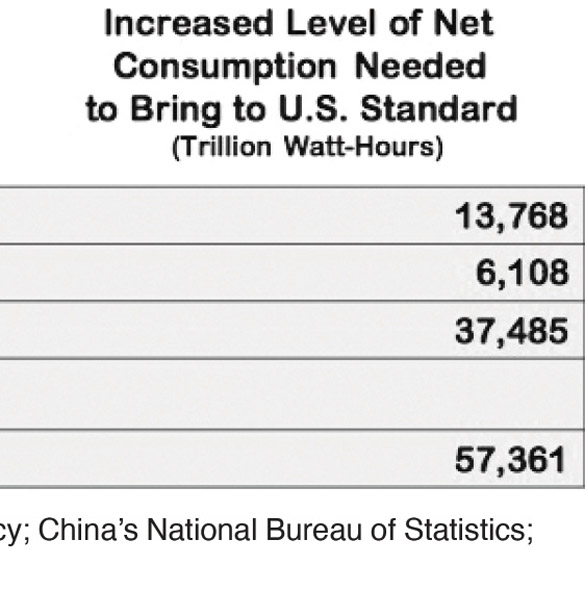 In Figure 2, we see the real, modern energy requirements of the developing world. The developing world as a whole needs 57.4 quadrillion watt hours of combined annual increased electricity consumption. Looking at the bottom line of this chart, you can see that the underdeveloped sector needs to quintuple its electricity production.

Consider just two principles of physical economy as regards to energy generation and its deployment in society: 1) energy-flux density, and 2) energy consumption vs. GDP per capita. Energy-flux density, as defined by American scientist and economist Lyndon LaRouche, is measured as the intensity of energy applied at the point of generation or application. Think of the energy concentrated in a laser beam used in metal-cutting, compared with the energy generated by a water mill of the 18th Century. See the comparative energy densities of different fuels, in Figure 3.

Observe that the increase in available energy from the Deuterium-Tritium fusion reaction, compared to the modern combustion of coal, is not a mere multiple higher, but, rather is seven orders of magnitude greater.

In all nations, rising rates of electricity use per capita correlate closely with rising GDP values. The greatly expanded level of electricity output derived from a fission-fusion based economy is a prerequisite for a modern labor force at work which allows a nation to progress. Although the massive expansion of hydrocarbon-based and nuclear fission-based energy production is essential—immediately for the Global South, until fusion energy is brought on line within approximately 15 years—only fusion energy provides the total amount of energy required to bring the world community, including all of Africa, to the higher required level over the long term. Historians will note that the Senegalese nuclear chemist, historian and political visionary, Cheikh Anta Diop, prescribed as early as 1960 an energy policy, for the African continent, of what he specified as “the effective control of thermonuclear reactions … [produced within instruments] called tokamaks.”

The current construction of the 4-unit Generation III+ fission nuclear complex at El Dabaa, Egypt—a collaboration of the Russian Federation and Egypt—is exemplary of what is required. What prospects would the Chinese-designed fission-fusion hybrid reactor have as a bridge to fusion-based power in Africa? 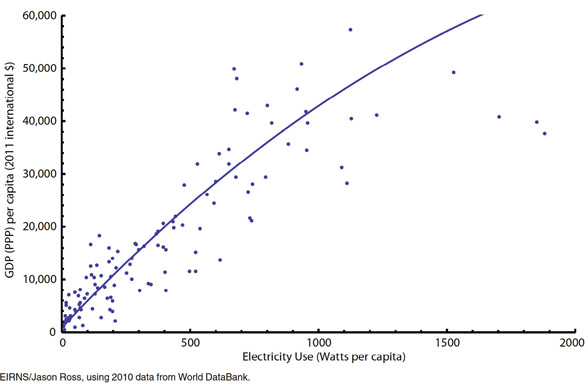 The correlation between per-capita electricity consumption and GDP is remarkably clear. Insisting that developing nations use “appropriate technologies” is insisting that they remain eternally poor.
View full size 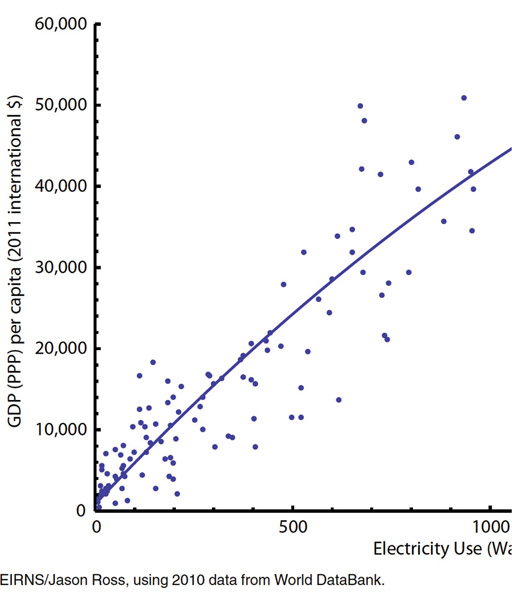 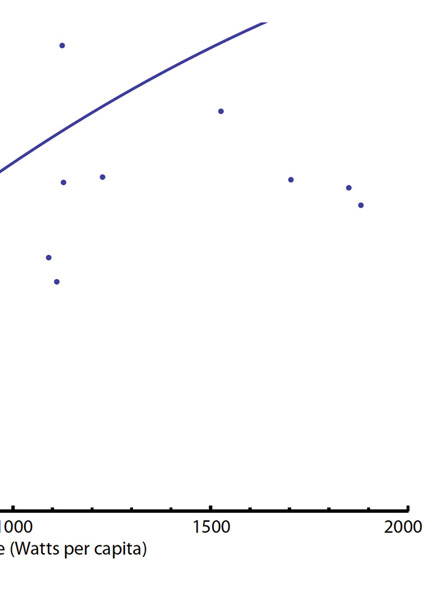 Figure 4 shows the correlation, nation by nation, between electricity consumption and GDP, per capita.

The Moon: A Practical Source of Fusion Fuel

Although time constraints do not allow for further background here, the superior fusion fuel is the isotope of helium, He3. Although it is extremely rare on Earth, a nearby source, the Moon, contains enormous amounts of this fuel in its soil, or regolith. In a real demonstration of “solar power,” the Sun produces He3 as one of the components of the “solar wind,” which it constantly emits into our Solar System. Lacking the protective magnetic field of the Earth, the Moon is the depository of a vast amount of He3 from the Sun. The lunar soil is currently estimated to have one to five million tons of He3.

Prof. Ouyang Ziyuan, renowned geochemist and cosmochemist, chief scientist of the Chinese Lunar Exploration Program (CLEP), has said that the Moon is so rich in He3 that this source could “solve humanity’s energy needs for around 10,000 years, at least.” Part of the mission of China’s series of Chang’e lunar probes is to scout out He3 deposits on the Moon. Professor Ouyang has long advocated this “great project” to be a joint collaboration among many nations to, in his words, “solve humanity’s energy needs….”

V. I. Vernadsky and the Future of Humanity

The outlook and practice of Professor Ouyang today, in an exemplary way, reflects the immense conceptual contributions of the 20th-Century biogeochemist, Vladimir I. Vernadsky. Academician Vernadsky’s contributions established principles of Man’s progress in the Universe which allow us a deeper understanding of the natural progression represented by all current work moving us into a fusion energy-based economy. In 1938, in his Problems of Biogeochemistry II: On the Fundamental Material-Energetic Distinction Between Living and Nonliving Natural Bodies of The Biosphere, Vernadsky wrote:

We are living in a brand new, bright geological epoch. Man, through his labor—and his conscious relationship to life—is transforming the envelope of the Earth—the geological region of life, the biosphere. Man is shifting it into a new geological state: Through his labor and his consciousness, the biosphere is in a process of transition to the nöosphere. Man is creating new biogeochemical processes, which never existed before….

The face of the Earth is changing profoundly. The stage of the nöosphere is being created. Within the Earth’s biosphere, an intense blossoming is in process, the further history of which will be grandiose, it seems to us. In this geological process—which is fundamentally biogeochemical—a single individual unit, out of the totality of humanity —a great personality, whether a scientist, an inventor, or a statesman—can be of fundamental, decisive, directing importance, and can manifest himself as a geological force. This sort of manifestation of individuality, in processes of enormous biogeochemical importance, is a new planetary phenomenon.

Thus, the recent decades’ fraud of “neo-Malthusian economic liberalism,” as LaRouche termed it—propagated by the Club of Rome of David Rockefeller and Aurelio Peccei with their widely read book, The Limits to Growth—was already discredited by Vernadsky, decades before its release. Vernadsky has shown through rigorous scientific work, that the universe is—as was understood in classical Greece—an axiomatically hylozoic universe.

The intensification of BRICS activity and its expansion with new members and partners, and similar processes involving the Shanghai Cooperation Organization (SCO), the Eurasian Economic Union (EAEU) and other open-to-all multi-national organizations, put the prospects for both a fusion-based economy, and a new paradigm of rapid, equitable and advanced development for each and all nations into a new, hope-filled domain. 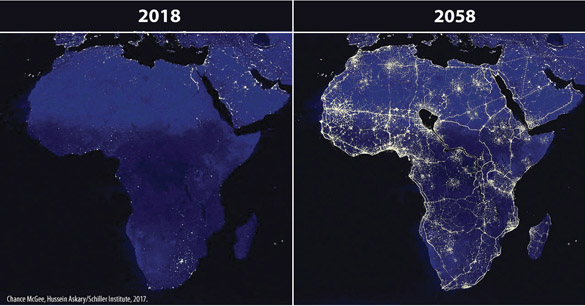 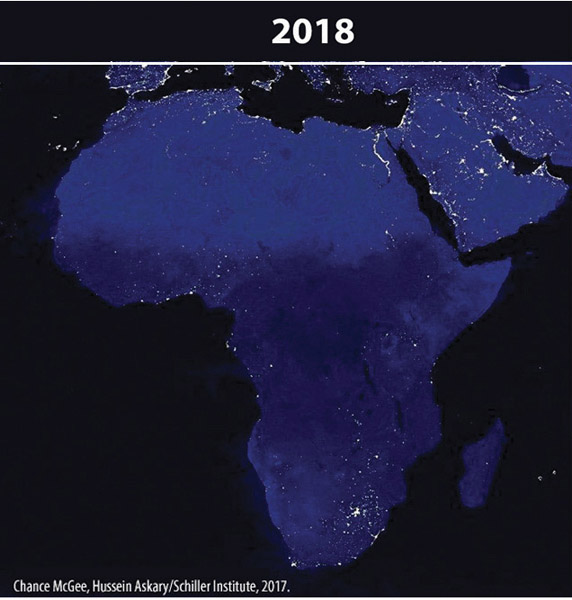 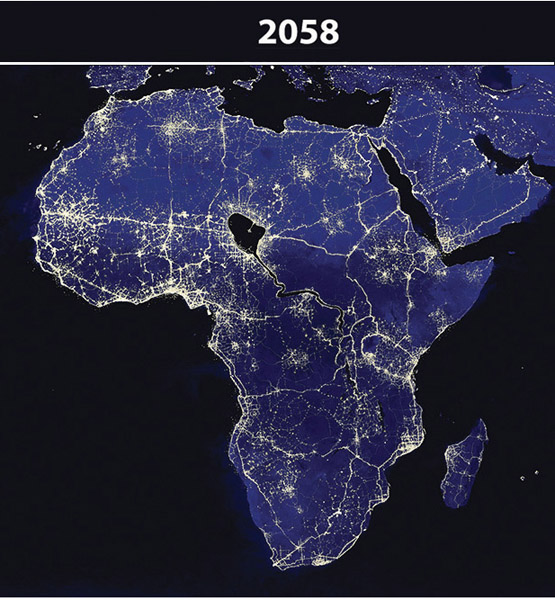 I close with a graphic published by the Schiller Institute in 2018 (Figure 5). On the left, see a current satellite photograph of energy-deprived Africa by night; on the right, see an artist’s projection of an “electrified” Africa by night—in the year 2058.

Thank you for your attention. Comments and questions are welcomed; email them to the Schiller Institute at richardblack1776@gmail.com.