This is the edited transcript of remarks delivered by video to the Schiller Institute’s Oct. 27, 2022 International Conference, “For World Peace: Stop the Danger of Nuclear War.” Mr. Black is a retired U.S. Army colonel and a former Virginia state senator. The presentation title and subheads have been added. The full video is available here. 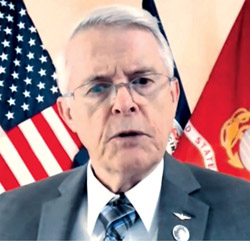 I’m Senator Dick Black. I’m happy to be here with you this morning. Let me get right into this. Here’s where we are now. There are influential Republicans who have begun calling for reductions in aid to Ukraine, and also for immediate peace talks to end the war. [Former] President Trump has called for talks, and he says we have to avoid being dragged into World War III. He said the war never would have happened under his watch. But in any event, he wants to end it now.

The Pope has called for a negotiated, peaceful solution to the war.

Democrats and Republicans:
A ‘Stark Distinction’

And we had a fairly dramatic announcement—[on October 11] former Congresswoman Tulsi Gabbard, who is very prominent in the Democrat Party and a [former] Presidential candidate, resigned from the Democrats, and she denounced them as an elitist cabal of warmongers who are driving us into World War III. Republican Minority Leader Kevin McCarthy has announced that if Republicans win the House [on November 8], that there would no longer be a blank check for money flowing over to Ukraine. He wasn’t saying they were going to cut it off, he just said that it was going to become much more closely scrutinized.

Elon Musk, sometimes the wealthiest man on Earth, has tweeted a very excellent proposal for peace talks. I won’t go into all of it, but it did include the United Nations moving into the contested areas and conducting binding referenda to let the Ukrainians on the border vote and decide: Do they want to remain in Ukraine, or do they want to join Russia?

On the other hand though, Ukraine angrily denounced any notion of self-determination for the people on the border. They know that these are Russian-speaking people, they’re ethnic Russians, and they do not want to give them a choice of whether they want to return to Russia or remain with Ukraine.

Now, while this going on, on the other side of the aisle, we have Democrat Senator Chris Murphy, and he said he believes that if Republicans win either the House or the Senate, that they will cut off all aid to Ukraine. I don’t agree with him; I don’t think that’s likely to happen. But he’s obviously trying to whip up some interest from among the globalists who have a tremendous amount of wealth and power at stake in this war.

Now, here’s the thing: Strangely, when Joe Biden pushed through an aid package for Ukraine—just a massive spending bill that has $40 billion, half of it for actual weapons—not a single Democrat voted against this bill. Medea Benjamin, the co-founder of Code Pink, a radical Democrat anti-war group, said this: “We were flabbergasted that not one Democrat voted against the $40 billion bill for Ukraine. Not even the Squad or the Progressive Caucus.” At the same time, 57 Republican conservatives did vote against this massive bill of arms for Ukraine. So, you can see which direction it is. The Democrats are all-in for war, the Republicans are having second thoughts. They say it’s time for caution, we can’t afford to be spending all this money there.

Well, looking at this stark distinction in the two parties, it smells to me like a political trap; and it really worries me a great deal. It’s just two weeks before Election Day, and Republicans at this moment have tremendous momentum to retake both the House and the Senate. This is going to happen, unless the Biden Administration can pull off a very nasty “October surprise” to tip the elections.

Now, the background to this is, we’ve got Britain’s Defense Secretary, Ben Wallace, just making a highly secretive, very extraordinary visit to Washington to talk with Secretary of Defense Lloyd Austin and White House officials about “shared security concerns.” So secret that they couldn’t be talked about on the most secure scrambled telephone lines. There’s a second defense minister, James Heappey [UK Minister of State for Armed Forces and Veterans], who said that the conversations with Wallace would be “beyond belief.” That’s a strange way to put it, “beyond belief,” suggesting that something both militarily and politically explosive was being planned.

The Russians just released intelligence indicating that they believe that Ukraine is about to detonate a nuclear dirty bomb. I fear that what they’re saying is correct. It would tie directly into the elections taking place. I think their plan is to execute a dirty bomb detonation that will throw radioactive nuclear material over a radius of several miles. I believe that the plan is a false flag, intended to be blamed on Russia, in order to inflame public opinion against Russia, just as the elections are about to be held, putting the Republicans on the defensive, because they have been calling for peace.

Now, it’s important for everybody to just lean back and think of the logic of this. There is no circumstance under which Russia would do anything dramatic like this, just days before the U.S. election. Right now, the party that is more reasonable toward Russia, in their view, is winning the election; it’s got tremendous momentum. Anything that Russia would do would break that momentum, and play into the hands of the Democrat Party, which is 100% opposed to Russia, and probably opposed to its continued existence as a nation. So, I think we face very perilous times.

The EurAsian Times just published something; it didn’t hit the western media. But there was a very extraordinary event that occurred when a U.S. Ohio-class submarine surfaced in the Arabian Sea. This is a secretive submarine that’s armed with 20 ICBM nuclear-tipped missiles. It was deliberately surfaced in a very public way, disclosing its exact location, sending a clear signal that the U.S. is now fully prepared for nuclear war. This is nuclear saber-rattling at its highest level. And I believe it was done to inhibit Russia from responding to a possible dirty bomb attack with some kind of a major response to target Kyiv itself.

America has never been at greater nuclear peril than it is today. We certainly have madmen in charge, both in the U.S. and in the UK. We have very strange things happening in Britain, where the Prime Minister was sacked just days after taking office; the British pound was plummeting. Suddenly, as soon as Liz Truss left office, the English pound was up at a much higher level. Ironically, the individual [Rishi Sunak] who was fired for Liz Truss’ very disastrous financial policies is now the lead contender to become the Prime Minister of Britain. Very strange. We know that King Charles, one of the ultimate globalists, wanted Truss gone, and apparently he’s got his man in. Something very sinister seems to be happening there.

We see something similar happening in Germany. Germany has announced that they know for certain that the explosions that hit the Nord Stream 1 and 2 pipelines were indeed sabotage. But they made this very strange statement. They said that for the sake of the well-being of the state, they will not reveal any other information. So apparently, they know who it is; they cannot tell the people, for fear the people would become too emotionally inflamed and it might not go well for Germany. Now, everybody in Europe is talking about the fact that this sabotage could not have been done without the OK of the United States. So, we’ve got the German economy headed for a dramatic crash, and they are unable to tell the people why that should be.

I think we all need to be very alert for things that may happen within the next few days leading up to the election. We need to be aware that logically, there is no way that Russia would do anything that would upset this election at this time. So, I wish you all the best. We’re faced with a very risky time.

Thank you for having me on this morning.