This transcript appears in the January 20, 2023 issue of Executive Intelligence Review.

The Minsk Process and the Merkel-Hollande Revelations

Mr. Ossenkopp is a Schiller Institute spokesperson in Germany, who served as the moderator of the symposium. We present here an edited transcript of the simultaneous English interpretation of his opening remarks delivered in German.

On December 8th, in the German weekly Die Zeit there was a lengthy interview with former German Chancellor Angela Merkel, in which she also spoke of the Minsk Agreement—an agreement that was supposed to establish a peace process for Ukraine in 2014. Ukrainian President [Petro] Poroshenko and Russian President Vladimir Putin had agreed on this and met in Minsk on September 19, 2014. Initially, they called for a withdrawal of all weapons and the creation of a security zone for the Donbass and the Donetsk and Lugansk republics. 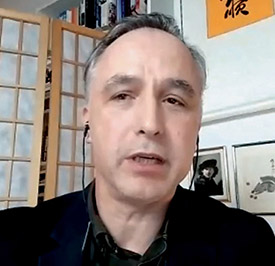 Then on February 12, 2015, the so-called bilateral contact group of Ukraine, Russia, and the OSCE (Organization for Security and Cooperation in Europe) signed a comprehensive package of measures. Presidents Poroshenko, Putin, Hollande of France, and Chancellor Merkel became the guarantors of this accord.

In July 2015, the Minsk Accord and the support guarantee were adopted unanimously in the UN Security Council as Resolution 2002.

The Minsk Agreement of 2014 was an attempt to give Ukraine time. They used that time to get stronger, as can be seen today. … It was clear to all of us that the problem was not being solved, but that is exactly what gave Ukraine valuable time.

Russian President Putin was asked about that Merkel revelation during a press conference he was giving during the Eurasian Economic Union summit in Bishkek, Kyrgyzstan, on December 9th. He said:

Frankly, this was a complete surprise to me. This is disappointing. As it turns out, nobody wanted to honor these Minsk Agreements. The Ukrainian leadership had mentioned this as well, but I still hoped that the other participants would be sincere with us. It seems they also deceived us. The only purpose was to pump weapons into Ukraine and prepare it for hostilities. Trust as such is already close to zero, but after such statements, the question of trust becomes primary. How can we negotiate at all? What can we agree on?

Yes, Angela Merkel is right on this point. Since 2014, Ukraine has strengthened its military position. In fact, the Ukrainian Army was completely different from the one of 2014. It was the merit of the Minsk Agreements to have given the Ukrainian Army this opportunity.

So, what does this mean for us today, eight years later, when the conflict is fully raging? And what does this mean for German Chancellor Olaf Scholz and the others? We have the confrontation between the greatest nuclear powers on the Earth, so what does this mean for our future? We’re going to discuss this, and we’ve invited some highly competent guests to do so. Afterwards, the people who were invited will have time to comment on the contributions made by the others, and to follow-up on them. Then, of course, we have ample time to take discussion from the audience.