Accelerating ‘Win-Win’ Good Will Between China and the United States 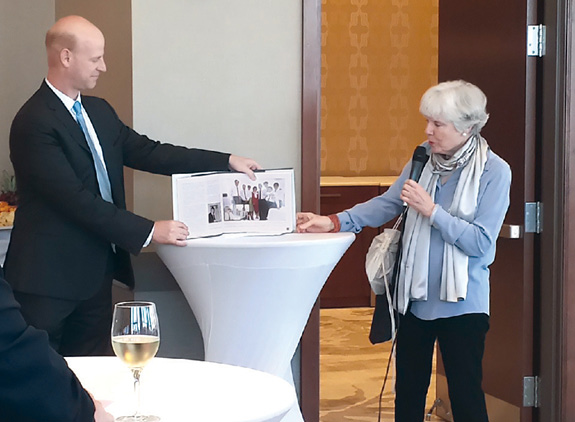 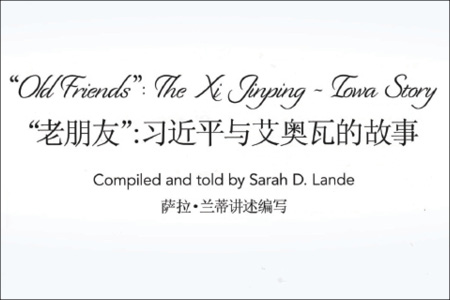 May 12—On May 3 in Des Moines, Iowa, a new book, ‘Old Friends’: The Xi Jinping—Iowa Story, was released with full diplomatic honors at a reception attended by about 200. The author, Sarah Lande of Muscatine, Iowa, came to know Xi Jinping, now President of China, back in 1985, when he first visited Des Moines while leading an agriculture tour of the region. Lande met him again several times, including when, as Vice-President, Xi returned to Muscatine in 2012. In June that same year, Lande visited China, and met Xi’s wife, Peng Liyuan.

From 1988 to 1998, Lande served as the first Executive Director for Iowa Sister States, a state-supported nonprofit organization that builds Iowa’s cultural, economic, and educational partnerships with the world, including Hebei Province in northern China, with which Iowa established a sister-state agreement in 1983. Members have pride in their state of Iowa and wish to share with the world their special bond of friendship with President of China Xi Jinping and how their friendship has grown. Sarah Lande was awarded the title of Honorary Friendship Ambassador in 2013 by the Chinese People’s Association for Friendship with Foreign Countries. It is believed Lande’s book will be published in China within this year.

The new book is bilingual (English and Chinese) and includes photographs personally selected by Xi specifically for the project. Lande said that she hopes the book’s stories will “inspire U.S.-China relations and inspire citizen ambassadors of any age, long into the future.”

Schiller Institute/Robert Baker
Participants listening to Lande’s presentation. Pictures in the background are by Mr. Bai Runzhang, Vice-Chairman of the Standing Committee of the Tenth People’s Congress, Hebei Province, China.

The foreword to the book was written by the current United States Ambassador to China, Terry Branstad, former Governor of Iowa (1988-1999, and 2011-2017), who met and hosted Xi on his visit in 2012. Branstad writes about the “significance of citizen diplomacy” and how it is demonstrated by the “remarkable story of President Xi Jinping” and the exchanges with Iowa. Xi, himself, contributed these words: “Our memoir, ‘The Xi Jinping—Iowa Story,’ will share our special story of friendship with the world. And I say, today we celebrate with you. . . . So this is truly a memoir of the people, by the people, and for the people. It’s a wonderful story showing Iowa’s people-to-people friendship at its finest.”

In addition to the author, speakers at the May 3 event could be grouped into Old Friends, Iowa Friends, and China Friends. Old Friends included Mr. Bai Runzhang, one of the five-person Chinese agricultural delegation led by Xi that visited Iowa in 1985, when Xi was an official in Hebei Province; Kenneth Quinn, former United States Ambassador to Cambodia and currently President of the World Food Prize Foundation; and Dan Stein, Chair of the Muscatine China Initiatives Committee. 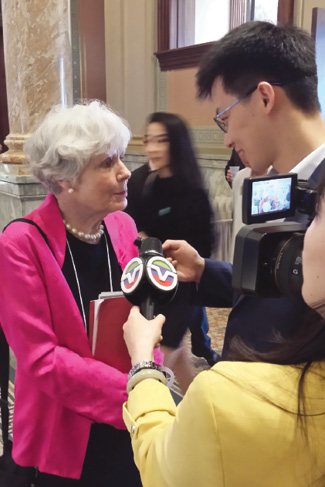 Schiller Institute/Robert Baker
Sarah Lande being interviewed at the Des Moines event by Wang Ping of the Xinhua News Agency.

China Friends included Chinese Ambassador to the United States Cui Tiankai, who emphasized friendship, saying, “The Xi Jinping—Iowa story is a miniature of the past forty years of robust and all-round development of China—U.S. relation, which has served the interests of our two peoples.” Also speaking were Mr. Xie Yuan, Vice President of Chinese Peoples Association for Friendship with Foreign Countries; and Mr. Hong Lei, Consul General of the Peoples Republic of China in Chicago.

Schiller Institute/Robert Baker
Former mayor of Muscatine, DeWayne Hopkins, and his wife Jill (left). From right, Albert Liu, who guided the language translations in Sarah Lande’s book, Dan Stein, and Mr. Bai Runzhang, who was with Xi Jinping when he first came to Iowa in 1985.

A large contingent of citizens from Muscatine came to Des Moines for the book release. The town is on the Mississippi River, and many recalled how Xi relished a boat ride on the Mississippi, telling Lande and others that he had read Mark Twain, and always wanted to try “life on the Mississippi.” Twain is a well-known folk figure in China.

The book event was held in the Hall of Laureates of the imposing premises of the World Food Prize building, an awards program initiated by the famous crop scientist from Iowa, Dr. Norman Borlaug, known as “father of the Green Revolution.” Attendee Robert Baker, of the Schiller Institute, noted the importance of this venue for “win-win” international economic relations. In the Hall is a prominent statue of another famous Iowan, Henry A. Wallace, former Secretary of Agriculture, Secretary of Commerce, and Vice President under Franklin D. Roosevelt, whom Borlaug, in his biography, credits as the original father of the Green Revolution.

The event included a musical offering by the Muscatine High School choral group, sung in Chinese. The song, “Lasting Memory,” was composed at the instigation of China’s First Lady, Peng Liyuan, for the 30th anniversary celebration in 2013 of Iowa and Hebei Province being sister states. The pre-meeting foyer music was a violin-viola duet playing Bach. 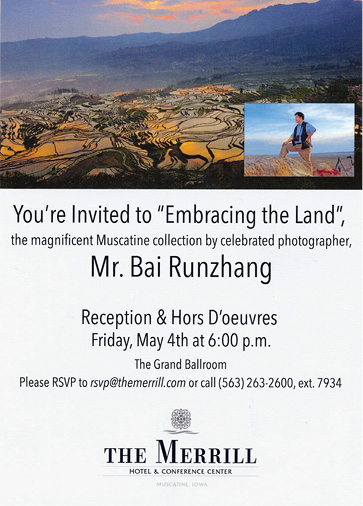 Invitation to a reception in honor of Mr. Runzhang’s donation of his beautiful photos of Chinese agriculture to the Merrill Hotel and the citizens of Muscatine.

A special reception and exhibit was held the following evening in Muscatine, at the Merrill Hotel and Conference Center, a newly opened luxurious Mississippi riverside boutique hotel, which caters especially to Chinese tourists. Again, the reception was in honor Sarah Lande’s new book, and the exhibition featured many enlarged photographs of Chinese agricultural vistas by Chinese master photographer, Bai Runzhang, who was also with Xi in the 1985 visit to Muscatine. Titled “Embracing the Land,” the exhibit was donated by Mr. Runzhang as a permanent display for the citizens of Iowa. A greeting from China was read by DeWayne Hopkins, the former Mayor of Muscatine, who hosted then Vice President Xi on a return visit to Iowa. Last July, Hopkins delivered the welcoming speech at a New York City conference titled, “Food for Peace & Thought,” co-sponsored by the Schiller Institute, which was attended by a large delegation of Chinese agriculture specialists.

Sarah Lande’s book, ‘Old Friends’: The Xi Jinping—Iowa Story, is an excellent book to promote, encourage, and represent how people of the United States and China, indeed all nations, can become “Old Friends.”

The book can be ordered online at https://www.xijinpingiowamemoir.com/ or Community Foundation of Greater Muscatine https://www.muscatinecommunityfoundation.org/iowa-story-book/ The price of the book is: $50 per book, plus S&H $21 per book.

Shipping is only available within the United States, at this time. Estimated delivery will be 10-14 days.