Stakeholder Capitalism: What Is It?

Stakeholder Capitalism: A Global Economy That Works for Progress, People, and Planet

by Klaus Schwab, with Peter Vanham 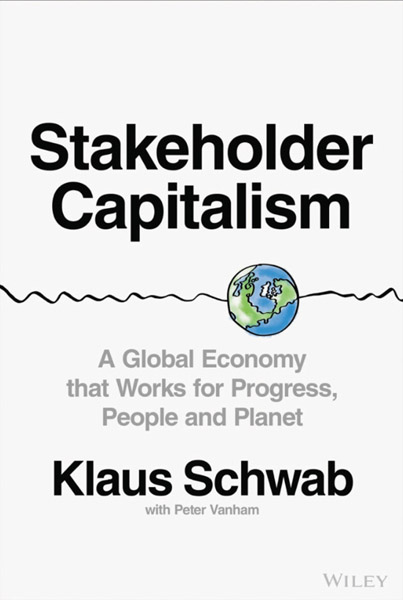 It would be overkill to devote an entire book review to Klaus Schwab’s latest book, Stakeholder Capitalism, which is due to be published in German next November. But since, as Founder and Executive Chairman of the World Economic financial lobby, he disseminates their views, it is worth taking a searching look at some of the chapters.

After all, he admits in the book that neoliberalism has failed and that the follow-on model is now to take its place under the name of “stakeholder capitalism.” The World Economic Forum of the super-rich also calls the same model “the Great Transformation,” “the Green Deal” or “the Great Reset,” as it sees fit.

But before we go into more concrete detail here on the sneakily packaged plans for this supposedly best of all financial worlds, the reader should be made to understand the characteristics of this policy as it is presented in Chapter 7, “The People and the Planet.”

In that Chapter, Klaus Schwab laments that the Club of Rome’s thesis that the limits of growth had already been reached 50 years ago, was not able to prevail worldwide. On the contrary, not only China, but many other Asian countries have successfully followed the path of industrialization and have become an example for many other emerging countries. This very development threatens the planet, he says on page 153: “Between 1990 and 2020, China experienced the greatest economic miracle in history, but is now also the single largest emitter of greenhouse gases.” Adding to all the ills of our planet’s climate problem, says Schwab, is the prospect that African countries like Ethiopia are also successfully striving to overcome extreme poverty.

Schwab then asks on page 154: What is the reason for this stubborn rejection of the theses of the Club of Rome? The answer, he says: human nature.

It reveals the central conundrum of the combat against climate change. The same force that helps people escape from poverty and lead a decent life is the one that is destroying the livability of our planet for future generations. The emissions that lead to climate change are not just the result of a selfish generation of industrialists or Western baby-boomers. They are the consequence of the human desire for a better future for oneself.

One cannot express more clearly and shamelessly this long-since-disproved thesis of the legendary Reverend Thomas Robert Malthus (1766-1834), who already then, on orders of the East India Company, spread the idea that human activity overburdens Nature. Schwab repeats that several times. Exactly that which distinguishes man from the animal, namely, the ability and the irrepressible will to improve his living conditions through technological progress, has always been a thorn in the side of the oligarchs.

Then Schwab describes in four pages, rather truthfully, the economic progress of Ethiopia: the construction of roads, an important railroad line, even an airport and the emergence of an industrial park. About the town of Awasa, he states on page 156:

The work is not easy, nor is it especially fulfilling, but it is a massive change from what most were used to before. It brings a more stable income, a chance to work in the real economy instead of the shadow economy, and small but real opportunities for personal development. It is industrialization at work.... It is still the most successful development model the world has ever known.

And this development, which has created a very modest improvement in the living standards of the population in Ethiopia, compared to the industrialized countries, has even come about using an ecologically oriented strategy. Schwab continues:

It shows that even today, there is no magic formula for poor countries to industrialize and keep their carbon footprint in check. Development, an increased standard of living, and a greater carbon footprint still walk in lockstep (emphasis in the original, page 157).

Therefore: Any further successful poverty reduction (even using so-called renewable technology) has to stop, in the interest of the planet. Stakeholder capitalism serves no other purpose than to ensure exactly that.

Now that you have understood what this is really about, the rest is easier to grasp.

The magic word that the financial lobby has been working on for 20 years is “dematerialized growth.” The concept is simple. It means that investments are no longer to be made in bridges and roads, in power plants or agriculture, but in financial entities that do not create value. The best-known example at present is CO2 emissions trading. The economic activity of many companies is curbed and penalized by it, while others can enrich themselves from it. The fact that representatives of business associations support this nonsense is a consequence of neoliberal thinking no different from the acceptance of decades of speculation, which has been at the expense of society and has, for example, torn huge holes in our entire infrastructure. How can one even begin to grasp that the whole business model of CO2 emissions trading hangs on a miniscule 0.04% of the atmosphere!

Likewise, it is extremely hard to imagine what the new label ESG (environmental, social, and governance investment) is supposed to mean; its intention is simply to rule out everything that the financial mafia defines as planet-damaging, unethical and non-regulatory behavior. This new “cleanliness label” of stakeholder capitalism is intended to ensure that a general shift in economic activity is enshrined in law. It is no longer to be permitted to invest in what society needs, but by mandate, only in what serves the bankrupt financial system and its associated claim to power: a new green financial bubble and political control.

The Pillars of Stakeholder Capitalism

Following the deregulation of financial markets, the flagships of the so-called Fourth Industrial Revolution, the GAFA corporations (Google, Amazon, Facebook, and Apple) developed into huge, largely unregulated monopolies. Facebook’s Co-Founder, Chairman, CEO, and controlling shareholder, Mark Zuckerberg; Apple’s CEO Tim Cook; or Peter Thiel, co-founder of PayPal and Palantir, are of the opinion that monopolies are particularly suited to formulate ethical values for the rest of the economy because they no longer have to worry about their own profit.

Larry Fink, Chairman and CEO of BlackRock, also makes a strong case for ESG adoption because he says he is concerned about the well-being of the planet. Companies that only care about short-term profit would not have the well-being of the next generations in mind, he says. Therefore, according to Schwab, the World Economic Forum’s International Business Council’s Chairman, Brian Moynihan, who is also Bank of America’s CEO, presented “Stakeholder Capitalism Metrics” at the end of last year. Just like the EU’s “taxonomy,” these metrics are intended to measure in figures what progress companies have made toward environmental, social and governance goals.

These Stakeholder Capitalism Metrics are planned by the financial sector to be in place by 2022, and are allegedly supported by more than two-thirds of the 140 firms on the World Economic Forum’s Business Council. All of the major accounting firms—the so-called Big Four (Deloitte, KPMG, EY, PwC)—have been working on the development of the metrics and are lobbying for making them an international standard and thus a reality as quickly as possible.

Against the background of economic history there is only one appropriate name for the model of stakeholder capitalism: fascism with a green face.