This editorial appears in the July 20, 2018 issue of Executive Intelligence Review.

July 16—The historic summit today between Presidents Donald Trump and Vladimir Putin marks a dramatic phase-shift in history. It is the result of a long, difficult battle, led in no small part by Lyndon LaRouche over the past fifty years, to create an alignment of interests among the great nations and cultures of history as the necessary and sufficient force required to end the tyranny of the British empire once and for all. In particular, LaRouche posed that cooperation among “Four Powers”—Russia, China, India, and the United States (which represents the distillation of the best of European culture)—could replace the broken Western financial system centered in London and Wall Street, with a new paradigm, based not on monetary power and colonial wars, but on a credit system to bring peace and prosperity through mutual development for all nations.

Before stepping into the private, one-on-one meeting with Putin, Trump told the press that they would be discussing many things, mentioning, in particular, that Russia and the United States were cooperating with “our mutual friend President Xi.” 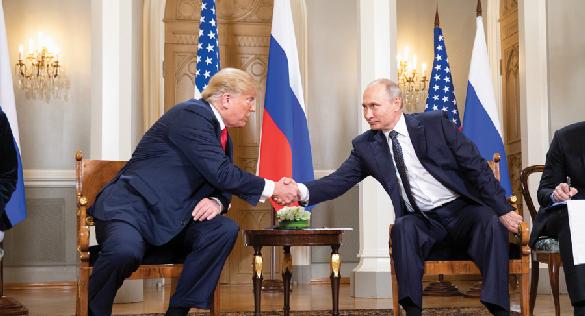 The two Presidents met the press after a two-and-a-half-hour private discussion and a luncheon with their aides. They both confronted the “foolishness” and “danger” of allowing the relations between the two leading nuclear powers to continue to deteriorate. Putin noted that “the current tension, the tense atmosphere, essentially has no solid reason behind it. The Cold War is a thing of past. The era of acute ideological confrontation of the two countries is a thing of remote past, is a vestige of the past.” He proposed re-establishing the anti-terrorism working group, and setting up three joint working groups of experts to work on solutions to the fundamental issues: (1) cyber-security, to get to the truth of the cyber warfare being used by the “Get Trump” task force under Robert Mueller to remove Trump from office and provoke war with Russia; (2) a working group of business leaders to expand cooperation, noting that over 500 leading U.S. business leaders attended the St. Petersburg International Economic Forum in May; and (3) a working group of political and military experts, to look for ways to collaborate on the serious issues facing mankind around the world.

Trump, in his statement, said he was determined to “continue the proud tradition of bold American diplomacy. From the earliest days of our republic, American leaders have understood that diplomacy and engagement is preferable to conflict and hostility.” He said that the relationship between the two nations “has never been worse than it is now. However, that changed, as of about four hours ago,” adding that “I would rather take a political risk in pursuit of peace than to risk peace in pursuit of politics.”

The U.S. and British media were their normal, hysterical frauds, but both Trump and Putin countered their lies forcefully. Asked if Russia had any “compromising material on President Trump or his family,” Putin laughed, explaining that he hadn’t even known that Trump had been in the country at the time written about in the Steele dossier lies, concluding that “it’s difficult to imagine utter nonsense of a bigger scale than this.”

When Associated Press demanded that Trump denounce Putin for interfering in the U.S. election, Trump shot back, asking why the FBI never took the supposedly hacked DNC server. “Why was the FBI told to leave the office of the Democratic National Committee? I’ve been wondering that. I’ve been asking that for months and months and I’ve been tweeting it out and calling it out on social media. Where is the server?”

On Syria, Putin said that “the task of establishing peace and reconciliation in this country could be the first showcase example of this successful joint work.”

The British assets in the United States are scared. They know they have been caught running a coup against the elected President of the United States on behalf of a foreign power, America’s historic enemy, the British empire. Obama’s killer CIA chief John Brennan perhaps best demonstrated the hysteria among these traitors, tweeting: “Donald Trump’s press conference performance in Helsinki rises to and exceeds the threshold of high crimes and misdemeanors. It was nothing short of treasonous. Not only were Trump’s comments imbecilic, he is wholly in the pocket of Putin.”

The traitor doth protest too much.

The LaRouche movement is now situated to bring the great powers together, in the spirit of the New Silk Road, to carry forward this historic victory, to build on this optimism as a means to implement the full LaRouche program, using his Four Laws, on an international scale, as the laws that truly cohere with the anti-entropic laws of the universe.