This editorial appears in the August 10, 2018 issue of Executive Intelligence Review.

THE BITCH IS NOT AMUSED

BRICS: Work Still To Be DoneTo Defeat the British Empire

Aug. 4—One can only be encouraged by the proceedings at the recently concluded 10th BRICS summit in Johannesburg, chaired by our nation. What we saw in statements from the gathered Heads of State, and including China’s President Xi Jinping and Russia’s President Vladimir Putin—altogether representing nearly half of the world’s population—was strikingly different from the blathering bullshit that characterizes the gatherings of the institutions of the dying old paradigm of the British Empire’s globalized monetarist system. Instead, there was the kind of serious deliberation on a pathway for peace and development that will constitute the content of the New Global Paradigm. Unique also was the attention and respect paid to the developing nations of the South, including the entire African continent, which was not the kind of master-to-slave diktats that come from the likes of the IMF.

Looking into the future, the BRICS member nations and their strategic partners see the possibilities for growth, peace and prosperity that a developing Africa brings, and have stated their commitment to take steps with investment in both social and physical infrastructure, in industry, and in strengthening what binds us together—our creative human potential. As President Xi so ably stated, they do this not for strategic or monetary gain, but because it is right to do so. Following the teachings of Confucius, and the best of Western religions, enrichment of your neighbor’s life, enriches your own. An essential characteristic of the New Paradigm is a determination to eliminate the zero-sum games of British monetarism, and to act on policies directed at creating only winners.

I applaud this message of hope for a future without losers, with freedom from the Hobbesian markets, which have crushed humanity under plodding boots. It is something that my movement, and its leaders Lyndon and Helga LaRouche, have fought for tirelessly for more than a half-century, and at great risk to their persons, against the bitch Queen of the British Empire and her lackeys and managers. We stand on the edge of an historic victory for all mankind.

But I must add a word of caution to those who might think that the battle is won. The British Empire will not simply yield to the force of history and concede the oligarchical power that has driven its policies to litter the world with billions of bodies over the last century. The truth and power of the new ideas represented by the New Paradigm, which seeks peace, prosperity and progress for all of mankind, can eventually win out, but not without a struggle, which may indeed get pretty nasty, and even bloodier with the forces of evil surrounding the bitch Queen and her Empire. It is our job to give force and direction to this fight, to identify the weaknesses in our enemy and to expose the Imperial traitors to our nations and to human progress itself.

I have attempted to do that in my exposure of the work of the Queen’s lackey, the former President of the United States, Barack Obama, in recruiting a global movement against the BRICS, and especially against its leading nations, China and Russia. Obama gave the keynote to this anti-BRICS initiative in his July 17 Annual Mandela Lecture that desecrated the memory of our nation’s father, Nelson Mandela. He falsely claimed that the Chinese model for economic development is dangerous because it is autocratic and denies individual human freedom, and therefore must be rejected by Africa and the rest of the world. 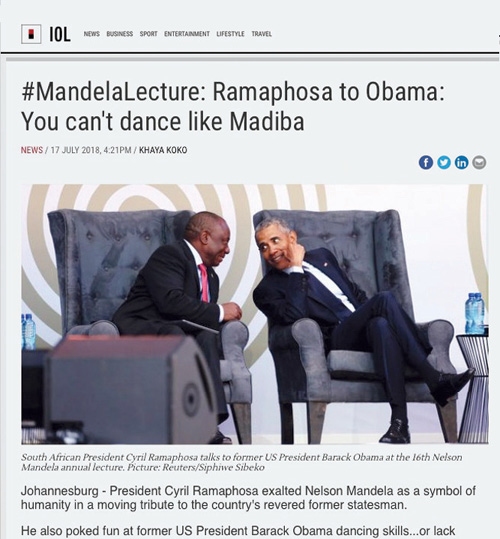 Instead he argued for the total freedom of the markets, even if those markets would cause Africa to be left without funding for large projects. Progress and freedom, this evil lawn jockey claimed, is best served by looking inward, and not in some globally expansive and overly expensive scheme. Reject the lure of easy money offered by the Chinese, said Obama, and by implication, the development plans offered by the Russians as well, because they seek to enslave you to their debt.

As the BRICS conference moved towards its close, Obama’s line has been picked up all over the world, promoted by the propaganda arm of the British Empire—what the embattled American President Donald Trump has correctly labeled the “fake news media.” Unfortunately, this lie was also repeated in a paper titled “China’s Trade-Disruptive Economic Model” at the July 26 World Trade Organization (WTO) General Council meeting in Geneva by Dennis Shea, President Trump’s appointed Ambassador to the WTO.

Bring In the New Paradigm

I need to make something very clear. The lending practices of China, Russia, and the New Development Bank (NDB, an arm of the BRICS) are strikingly different from those of the financial institutions of the dying empire of money of the City of London and Wall Street. Whereas China, Russia and the NDB are issuing credit for a purpose—for specific development and other projects—without regard to making financial profit on what is lent, what little lending emanates from Wall Street and the City of London is for profit, that is, to make money—financial profit—for the lender, as much as they can extract, even if that means the creation of conditions that will kill large numbers of people.

This is nothing new: Shakespeare had accurately characterized the Venetian lender, Shylock, as seeking his “pound of flesh.” That play is called The Merchant of Venice and it takes place in the devil’s own city-state that gave birth to the modern form of the monetarist system, and whose spores created the British Empire and the City of London.

Regardless of what the BRICS leaders—including President Xi—say about not intending to pose a challenge to the existing, globalized monetarist system, this concept of “credit for purpose, not for profit” is the most serious challenge to that system in its present incarnation. It parallels the ideas of the great American Treasury Secretary Alexander Hamilton, and of Lyndon LaRouche. With nations representing nearly half the world’s population acting within a new system of credit that is coming into being, I can tell you, the bitch Queen is not amused.

The BRICS represents the seed crystal for this new system. I urge its leadership to act both consciously and decisively to bring the New Paradigm into reality as quickly as possible. An international conference could be convened immediately, just as Helga Zepp-LaRouche has called for, which will go beyond what was done at the 1944 Bretton Woods Conference, to create a new financial infrastructure suitable for the distribution of vast amounts of credit for long-term infrastructure construction, and other projects, and which will return the world to a stable relationship among national currencies, ending the wild, casino-like speculation of the current system.

This new system will replace the discredited and hated International Monetary Fund and a World Bank whose flawed and restrictive charter has always prevented it from lending for any large projects, such as those envisioned in China’s Belt and Road Initiative. To state it again: We cannot reform the old system. We need a new one, one that creates stability and promotes the creation of massive amounts of Hamiltonian/China modeled credit, without regard for monetarist profit. 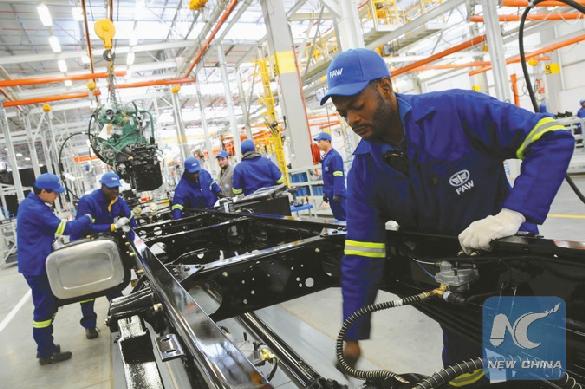 Such a conference and such an outcome need to be accomplished as quickly as possible, before the British try to blow up the long-ago collapsed existing system, kept alive with transfusions of trillions of dollars sucked into the City of London/Wall Street casino. There is talk in the media about blowing up the system sometime in the next few weeks, prior to important mid-term elections in the USA, in order to turn support away from their strategic adversary, the economic-policy challenged President Trump.

Trump is not Africa’s enemy, as some stupid people on the continent and in South Africa contend. Rather, it is the British Empire and the London/Wall Street axis, which Trump often challenges, that remains the enemy of all mankind. As I have said before, President Trump and the United States should ask to join the BRICS and the United States should bring itself into the New Paradigm. “This will never happen,” you say? “The U.S. will never be a force for progress!” Not only can this happen—we must make it happen.

We have, as they say, a lot of heavy lifting to do, to rapidly bring the New Paradigm into being. Much of our government and national leadership are both fakers and liars. We saw our President hug the BRICS leaders and seem to embrace their policies. But we saw that same Cyril Ramaphosa only a few days earlier hug Obama, and praise him. And didn’t we see him, a couple of weeks ago, in London, getting orders from his true masters?

We must finally create, here and everywhere, a new leadership, committed to progress for all of mankind. Take off the blinders that have been put on us by the fake media and the likes of the lawn jockey Obama, and take responsibility for our future, for the sake of all our citizens and all of Africa. Onward to our true destiny! Will you join me?