This editorial appears in the April 5, 2019 issue of Executive Intelligence Review. 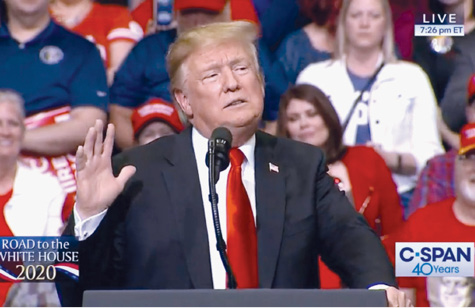 March 29—“After three years of lies and smears and slander, the Russia hoax is finally dead. The collusion delusion is over.”

With these words, President Donald Trump opened a raucous rally in front of more than 15,000 enthusiastic supporters in Grand Rapids, Michigan on March 28, celebrating the release of the report by Special Counsel Robert Mueller on March 22. According to the summary submitted to Congress by Attorney General William Barr, Mueller found no evidence of collusion, nor of obstruction of justice, thus vindicating Trump’s repeated claim that the investigation was a “witch hunt.”

In his remarks, Trump did not merely proclaim vindication. He issued a call to action, asking those at the rally to join him in defeating the anti-Trump coup plotters, who are foolishly continuing their campaign to remove him from office. He forcefully denounced leading Democrats, naming Representatives Adam Schiff and Jerrold Nadler, who are both using Committees in the U.S. House of Representatives to expand their fake investigations. Trump said they “need to decide whether they will continue to defraud the public,” now that Russiagate has been exposed as a fraud. He also excoriated the media, and intelligence officials who had served under President Obama, such as former CIA Director John Brennan and former Director of National Intelligence James Clapper, suggesting that both of them could be prosecuted for lying, and using their positions to illegally unleash the witch hunt.

In an interview with Fox television’s Sean Hannity before the rally, Trump stated that he will soon release all documents related to the attack on him, including those compiled by the FBI, which used the fictional dossier written by “former” British MI6 operative Christopher Steele, to get surveillance warrants from the secret Foreign Intelligence Surveillance Act (FISA) court, as well as the “302” reports on FBI interrogations, text messages, and emails from the coup plotters. President Trump said:

I have plans to declassify and release. We must never let this happen to another president. I hope they don’t get away with it. . . . It’s an investigation that should never have happened. [On the role of corrupt, leading officials of the FBI who were part of the coup apparat:] They wanted to do a subversion. . . . It was treason. It was really treason.

That Trump survived the persistent and vicious assault against him is in itself quite remarkable. He had to endure years of media leaks and lies, attacks on his family, his businesses, and his associates, many of whom were threatened and bullied, to get them to turn against him, as his former attorney Michael Cohen did. Mueller also secured fraudulent indictments of “Russians” for cyber meddling, which will never be tested in court, and convictions for “process crimes” unrelated to the assignment given him. Yet, in his final report, Mueller was forced to admit there was no proof that Trump colluded with foreign efforts to steal the 2016 election.

This conclusion is a harsh blow to the anti-Trump fanatics committed to his impeachment, leaving them reeling, stammering that they will “go further” than the special counsel in their hysterical resolve to overturn their defeat by Trump in the 2016 election. The Schiller Institute’s Helga Zepp-LaRouche, who has taken a leading role in exposing the fraud behind the attempted coup, said in a webcast on March 28, a transcription of which is in this issue of EIR, that it is not surprising that Trump’s opponents will continue, as the report “did not lead to the desired result,” i.e., his removal! But now is no time for complacency, she added. Instead, “Now is the time for reckoning” for those who ran the attempted coup.

‘Who and Why?’ Must Now Be Answered

In that same webcast, Zepp-LaRouche made clear that she is not talking about revenge in pursuing the coup plotters, but of something more profound, which is a “matter of war and peace.” The attempted putsch against Trump was never simply about disgruntled supporters of Hillary Clinton seeking revenge for her electoral defeat. It was launched by the highest levels of British intelligence, in collaboration with accomplices from the Bush and Obama-Clinton networks, to prevent Trump from overturning the post-Cold War consensus of using geopolitical confrontation to protect the British-directed unilateral world order, which was imposed following the collapse of the Soviet Union. This imperial order is being challenged by the rise of China, and its Belt-and-Road Initiative, which is adding nations as collaborators every day, and which is occurring as the London-based trans-Atlantic financial and trading system is following the Soviet system into the trash heap of history. [box: VIPS Leader Larry Johnson: British Intelligence Drove Russiagate Coup Attempt]

It is precisely this “systemic crisis” of the London-Wall Street financial system which Lyndon LaRouche warned of, and to which he directed the policy solutions contained in his Four Laws—for Glass-Steagall bank separation, national banking, credit for infrastructure and manufacturing, and a science driver based on a revived space program and the development of fusion energy.

In his presidential campaign, and throughout his presidency, Trump made it clear that he wants to lead the United States out of this collapsing order, which has been defined by endless wars, regime-change, false-flag provocations, and a bubble economy. That bubble has again built up a level of unsustainable debt, which could implode at any time. Rather than preparing to go to war with China and Russia to defend a financially and morally bankrupt trans-Atlantic financial system, as the imperial neocons intend, Trump has said that he wants to achieve a peaceful, mutually beneficial relationship with the two other leading powers. He emphasized this again in his Grand Rapids rally, saying the U.S. should have a “great relationship with Russia and China,” but that “fake news” turned it into Russiagate.

That Trump understands the British role is evident in tweets he sent out March 18, when he retweeted comments from William Craddick of Disobedient Media. Craddick tweeted that “Russiagate was designed in part to help the UK counter Russian influence by baiting the United States into taking a hard line against them. . . . Just another episode of the Great Game.” A second retweet by Trump was a Craddick retweet of a comment from 2020 Democratic Party presidential candidate Tulsi Gabbard, who wrote:

Short-sighted politicians and media pundits who’ve spent the last 2 years accusing Trump as a Putin puppet have brought us the expensive new Cold War & arms race. How? Because Trump now does everything he can to prove he’s not a Putin puppet—even if it brings us closer to nuclear war.

Up until now, other than Mrs. LaRouche and a handful of other courageous individuals, such as former National Security Agency (NSA) Technical Director and whistleblower Bill Binney and his associates, the assertion in the Mueller report that the Russians did interfere in the U.S. election, has gone unchallenged. In her webcast comments, Mrs. LaRouche identified the escalation against Venezuela—led by National Security Advisor John Bolton, Secretary of State Mike Pompeo, Vice President Mike Pence, members of both parties in Congress, and the same media hacks who are still smarting from being slapped down by the Mueller report—as part of the effort to trap Trump into a position on Venezuela against Russia and China. She said that “. . . unless this apparatus is dismantled, they will find new ways to entrap” Trump, calling the Venezuela escalation “the continuation of the coup against Trump, ‘with other colors,’ ” a reference to the launching of “color revolutions,” as in Ukraine, as regime change operations under the cover of “humanitarian” efforts.

In an interview on radio station KTKK in Salt Lake City this week, Bill Binney told this author that he fully endorsed Mrs. LaRouche’s insistence that the perpetrators from the UK intelligence community and the anglophile “shadow government” in the United States must be “held accountable.” If this does not happen, he said, “they will do it again, lying as they did to get us into war in Vietnam (in the 1960s), and with the lies about weapons of mass destruction to justify the overthrow of Saddam and mass murder in Iraq,” and again with the lies from the “British and former CIA Director John Brennan about Russian hacking.”

Binney has conducted the most thorough forensic investigation into the charge that the Russians hacked the Democratic National Committee (DNC) and Clinton campaign computers—which is at the heart of Russiagate—refuting it on every level. He said he knew from August 2016 that the charge was a fake. Instead of hacking by Russia, he proved that the data leak was the result of an “inside job,” with a thumb drive or similar device. Yet, despite his known expertise in this area, he was never called to testify by Mueller, and his reports have been blacked out of the major media.

While the combative spirit shown by Trump in Grand Rapids is a sign that he is up to the fight, the question now remains whether the American people will respond to the call to action and join with the LaRouche movement to use this opportunity to take down the corrupt British-U.S. networks responsible for war, chaos and poverty.

The conspiracy against Donald Trump, in my opinion, originated with British intelligence and persons connected with the Clinton Campaign. The provocation/dangle of George Papadopoulos was the result of electronic intercepts by GCHQ [the signals intelligence/electronic surveillance headquarters of British Intelligence] targeting people working on the Trump campaign. The collection effort generated hundreds of highly classified “SIGINT” messages that were disseminated in the U.S. intelligence community. Those messages led to the unmasking of more than 100 Americans whose names appeared in those reports. And this “intel” dump from the Brits became the predicate for launching a counter intelligence investigation of Donald Trump and his campaign.

Johnson gave that precise identification of the origination of the assault on the presidency in his posting, “Time for Clapper to Go Under Oath.” The posting makes clear Johnson is not speaking as someone “out in the cold.”

When the tale of the plot to destroy Donald Trump’s candidacy and Presidency is told, Jim Clapper will be proven as a key player in the conspiracy. Clapper was not a passive observer. I am told by friends who had direct dealings with Clapper during his tenure as the Director of National Intelligence that he was helping coordinate the activities of the CIA, the NSA and the FBI in the collection and dissemination of information on Trump and his associates. [back to text]