This editorial appears in the April 12, 2019 issue of Executive Intelligence Review.

Trump on a Peace Offensive;the British Fight Back 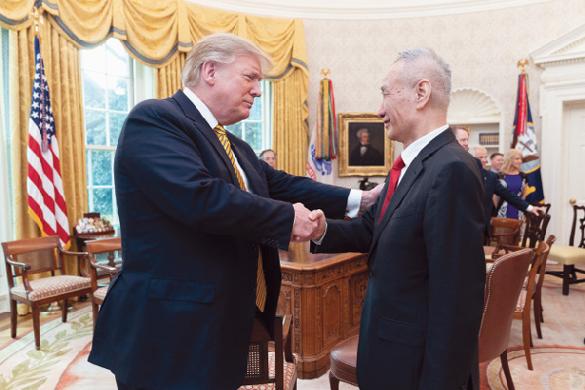 April 6—In the wake of Attorney General William Barr’s March 24 release of the summary of the Report issued by Special Counsel Robert Mueller, with the conclusion that there was no evidence of either “collusion” with Russia nor evidence of Obstruction of Justice, President Donald Trump has launched a series of unprecedented initiatives in what can only be described as a global Peace Initiative. These include:

• The breathtaking announcement by President Trump, on March 26, on his commitment to send U.S. astronauts back to the Moon by 2024.

• President Trump’s rally in Grand Rapids, Michigan, on March 28, when he declared, “After three years of lies and smears and slander, the Russia hoax is finally dead. The collusion delusion is over.” Trump went on to emphasize that he will take steps to ensure that America “has a great relationship with Russia and China,” and that he hopes he will soon meet with both President Putin and China’s President Xi.

• The remarkable Town Hall meeting, on April 1, hosted by NASA Administrator Jim Bridenstine, where he described President Trump’s timetable and the thinking behind the commitment for establishing a permanent human presence on the Moon.

• The Joint White House press briefing, April 2, with NATO Secretary General Jens Stoltenberg, where Trump publicly disagreed with Stoltenberg’s characterization of Russia as a strategic threat, saying, “I hope that it’s not going to be a security threat. I hope we have a good relationship with Russia, and with, by the way, China and everybody else. . . . I think that we will get along with Russia. I do believe that.”

• Trump’s unscripted comments at a joint White House appearance with Chinese Vice Premier Liu He on April 4, where he said, “Between Russia, China and us, we’re all making hundreds of billions of dollars worth of weapons, including nuclear, which is ridiculous. I think it’s much better if we all got together and didn’t make these weapons . . . those three countries I think can come together and stop the spending and spend on things that are more productive toward long term peace.” Trump then turned to Liu He, and asked, “I don’t know if I’m speaking out of turn. We haven’t discussed this very much, but I feel that, you know, the military expenditure of you, and Russia, us—it’s a lot. A lot of money could be put in other things. Would you like to respond to that?” Liu He replied. “I think it is a very good idea.” Following the meeting, Trump then told reporters that U.S.-China relations were the “best they have ever been,” and was effusive about the scope of the “epic” trade deal being negotiated with China, which he hopes will be completed within the next four weeks.

• Trump’s repeated calls, over the last twelve days, for “investigating the investigators,” i.e., the urgent necessity for determining the origins and the players involved in what was an attempted coup d’état against his Presidency. Given Trump’s previous public identification of the involvement of British Intelligence in the coup attempt, this is very dangerous for the British Crown.

Taken as a whole, these are unprecedented actions and statements,—for any U.S. President or other world leader—and they represent a clear perspective that the fight we are now engaged in can be won.

Were President Trump to succeed in these initiatives, it would produce an abrupt end to the world order crafted by the geopoliticians serving the interests of the British Empire. After a day or two of a stunned reaction and fumbling for a response to the Mueller fiasco, various British assets hysterically responded. The frenetic Democrats wailed and gnashed their teeth, and then using their control over Congressional committees, they announced, incredibly, that they will continue their effort to find “collusion” with the Russians, which Intelligence Committee chair Adam Schiff says he “knows” occurred—perhaps a Ouija Board told him. They intend also to conduct numerous fishing expeditions by other committees into Trump’s businesses, his family’s businesses, campaign expenditures, security clearances, etc.

The pathetic nature of these shenanigans may be seen in the attempt to create a hue-and-cry around the demand to “release the full Mueller report,” even though President Trump has publicly stated that the release of the full report “wouldn’t bother me at all.” Democrats have also announced that they will subpoena Mueller and members of his team to appear before committees. The discredited former FBI Director James Comey, who was fired by Trump—an act used to bring in Mueller as special counsel to look into “obstruction of justice” charges—spoke out against “investigating the investigators,” calling it a “dangerous step.” Ignoring the damage done by his corrupt allies in the FBI leadership and at the Justice Department—many of whom face criminal prosecutions—Comey said this would be “a terrible cycle to start.”

Leading Democrats have also joined with pro-war Republicans in a full-throated chorus of attacks on Russia and China, to poison any effort at building a new relationship with them. Members of both parties continue to demand that Trump react more forcefully against Russian and Chinese “aggression,” with some still accusing Putin of blackmailing Trump, reviving the blueprint from the discredited Christopher Steele report. They are using an egregious false claim against Russia left standing by Mueller—that Russia meddled in the 2016 election, to charge Russian President Vladimir Putin with malicious intent toward the United States. At the same time, a gang of Bush-connected has-beens has re-established the Cold War anti-Russian organization, the Committee on the Present Danger, this time with a focus on China. 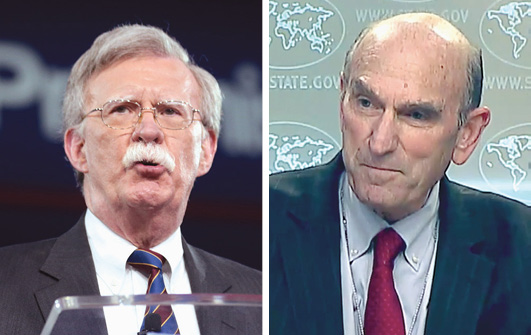 This anti-Trump agenda is being aided by statements coming from Anglophile snakes within his own administration, especially from National Security Adviser John Bolton, who has been taking the point in attacking Russia and China. Bolton, backed by a newly-appointed deputy, Iran-Contra criminal Elliott Abrams, has drawn an Obama-type red-line in Venezuela, issuing warnings to the Russians to stay out of Venezuela, proclaiming that any effort by Russia to “establish or expand military operations in the Hemisphere” will be considered “provocative actions.” Bolton’s hawkish statement was echoed in a March 29 Wall Street Journal editorial, “Putin Pulls a Syria in Venezuela,” which accuses Putin of repeated military interventions—in Georgia, Crimea, eastern Ukraine and Syria—saying he is now meddling in “America’s backyard in Venezuela.” The Russians have warned the United States against running a regime-change coup in Venezuela, especially as Trump has called for an end to such practices by the United States

The push for a confrontation with Russia in Venezuela is coming not only from “conservative” circles. Fareed Zakaria of the impeachment-cheerleading, so-called liberal CNN, tweeted on March 31, “The real puzzle remains: Why has Trump been unwilling to confront Putin in any way on any issue? And will Venezuela be the moment when Trump finally ends his appeasement?”

On March 28, the same day that President Trump declared in Grand Rapids that he will act to ensure that America “has a great relationship with Russia and China,” British Foreign Secretary Jeremy Hunt authored an op-ed in the Washington Post with the provocative headline, “Britain has been shaping the world for centuries. That won’t change with Brexit”! Hunt states that the British have done, “alongside the U.S. . . . more to shape the world we live in than any other country.” He cites Britain’s role as the “No. 1 financial center in our hemisphere, the second largest military budget in NATO,” and its use of “soft power,” i.e., psychological and cultural warfare, as the basis of their “genuinely global reach.” 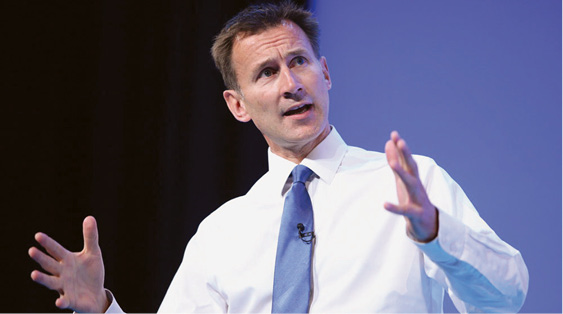 On April 4, Hunt was in Washington, D.C., along with other foreign ministers, to attend celebrations commemorating the 70th anniversary of the founding of NATO. The hoopla surrounding this event was heavily trumpeted by the Washington Post and other media, amidst dire warnings of “threats” posed by Russia and China.

Britain’s self-appointed role as the leader of the new war drive was on full display in an article published on April 1 by Chatham House, the Royal Institute of International Affairs (RIIA), the most important of the Queen’s strategic launching pads. Written by Hans Kundani, a senior research fellow at Chatham House, the headline tells it all: “To Preserve NATO, Britain Must Help Reinvent It.” He writes that the formation of NATO “was a British initiative.” “Then, as now,” he asserts, “Russia was increasingly seen as a threat to Europe.” While paying lip service to Trump’s demand that Europe must make a greater contribution to its own security, he concludes by writing that “The UK is the only power that can take the lead” in reshaping NATO to repel the Russian challenge.

At the NATO celebrations, it was NATO General Secretary Jens Stoltenberg who took the point in insisting on military confrontation with Russia and China. At the April 2 White House press briefing with Donald Trump, Stoltenberg repeatedly attempted, yet failed, to box Trump into making anti-Russia and anti-Chinese comments. The Norwegian Stoltenberg is also a vocal advocate for imposing the anti-science genocidal demands by the United Nations for combating “climate change,” including mandatory reductions in “carbon emissions.” Here, too, he and Donald Trump are on opposite sides of the fence.

Next came Stoltenberg’s incredible performance, on April 3, in an address to a joint session of the U.S. Congress, a convocation usually reserved for heads of state and heads of government. In an extraordinarily warlike speech before an unbelievably responsive Congress, Stoltenberg accused Russia of a litany of crimes, including chemical attacks in the U.K. (the notorious Skripal affair), support for “[Bashar al-]Assad’s murderous regime in Syria . . . cyber-attacks on NATO allies and partners, targeting everything from Parliaments to power grids . . . sophisticated disinformation campaigns, and attempts to interfere in democracy itself.” Needless to say, he did not provide any evidence to back up these charges, nor did he comment on the evidence which shows that these events either did not occur, or were the product of false-flag operations by the British, not the Russians.

Many Congressmen, on both sides of the aisle, gobbled up this garbage. President Trump clearly has not. And in the wake of the release of the Mueller report, he is in the strongest position he has enjoyed for many months. What will completely destroy these British designs—what will create even much greater freedom for Trump to act on his agenda—is the full exposure of the British role in “Russiagate,” i.e., the evidence that the attempt to carry out a putsch against a sitting U.S. President was organized at the highest levels of British Intelligence and the British elites.

Such revelations will provide President Trump with an opportunity to move forward in his peace initiatives with both Russia and China, and to proceed in the direction of a Four Power agreement to establish a New Bretton Woods. This is the perspective discussed by Helga Zepp-LaRouche in her April 4 webcast, and is the pathway for peace and development defined by Lyndon LaRouche throughout the recent decades.