This editorial appears in the May 31, 2019 issue of Executive Intelligence Review.

May 24—In an interview with Fox-TV News on May 20, U.S. President Donald Trump dropped another in a recent series of bombshells, when he described those pushing for war with Iran as part of a “Military Industrial Complex,” run by people who “like war.” Speaking of the opposition to his orders to withdraw U.S. troops from Syria, first announced in April 2018, he said “if it was up to them, they’d bring thousands of soldiers in . . . They never want to leave. They always want to fight.”

In raising the specific issue of the Military Industrial Complex, a term historically linked to the warning by President Dwight D. Eisenhower in 1961, Trump has once again defined that the issue before us today is one of war or peace, and he has restated his intention, as he has done since the 2016 presidential campaign, to end the 16 years-long war policies of the preceding George W. Bush and Barack Obama presidencies.

What President Trump is doing is both incredibly courageous and unprecedented, and it should be looked at within the context of both his May 23 announcement that he has given Attorney General William Barr full authority to declassify documents concerning the spying on the Trump Campaign,[fn_1] and his recent multiple references to British intelligence involvement in the “get Trump” operations. President Trump is escalating, and he is acting to crush the treason faction in Washington, DC—and to foil their efforts to provoke another war.

During the May 20 interview, President Trump was asked by Steve Hilton, the Fox interviewer, if he could reassure viewers that he is “not looking for some conflict in Iran.” Trump reminded Hilton that he is the one who has repeatedly objected to the wars that have gone on for years, especially in the Middle East, wars that have been supported by both parties,—the “endless wars,” which he criticized both during his campaign for President and since becoming President. As an example of his intent, Trump stated that after defeating the ISIS Caliphate in Syria, he decided “to bring our troops back home.” The response to that decision, he added, was that the “place went crazy. You have people here in Washington; they never want to leave.”

An example of that craziness was a non-binding Senate resolution against the withdrawal of U.S. forces. It passed overwhelmingly, by a 70-26 vote, with both Democrats and Republicans voting to defy the President, pushed jointly by Republican Majority leader Mitch McConnell and Democratic Party leader Chuck Schumer. Continued resistance to his decision has resulted in a slowdown of the troop withdrawal, as 2,000 troops remain in Syria and 5,000 in Iraq.

The President’s resistance to the war drive can also be seen in his response to a May 22 announcement that the Pentagon has drafted a plan to deploy as many as ten thousand additional U.S. troops to the Middle East, “to boost U.S. defenses against Iranian threats.” Asked on May 23 about the possibility of more troops being sent to the Mideast, Trump simply replied, “I don’t think we’re going to need them.”

As in the case of Russiagate, in the current attempts to provoke a crisis with Iran we see once again the hand of the British. While the unhinged National Security Adviser John Bolton continues to rant about “new threats” from Iran, which allegedly have been discovered by U.S. and allied intelligence, it is the duplicitous British Foreign Secretary, Jeremy Hunt, who proclaimed that the UK fully holds “the same assessment of the heightened threat posed by Iran.”

Given the evidence that has come to light in Russiagate of the penetration of U.S. intelligence agencies by British operations, a legitimate question is immediately posed as to whether the alleged evidence of new “Iranian threats” does not all originate with British intelligence, and has simply been laundered through various agencies in Washington? The British historically specialize in disinformation, outright lies, terrorist deployments and false flag ops to provoke wars in the region. Both the Sun and the Express reported today the deployment to the Persian Gulf of the British Special Boat Service, special forces which have been deployed to “protect against Iranian attacks on merchant ships.”

Given the stakes we are dealing with, it is urgent to recall that the “intelligence” that led to the 2003 disastrous war against Iraq also came from the British,—specifically from Sir Richard Dearlove, then head of MI6. Dearlove released a dossier which falsely asserted that Iraq possessed weapons of mass destruction, a document cited by Bush administration officials to justify the invasion. This is the same Dearlove who repeatedly has vouched for the validity of the “Steele Dossier,” fabricated by one of his boys, Christopher Steele,—the very dossier laundered to Brennan, Clapper and Comey to launch the drive to remove Trump from office.

Steele’s dossier, and its use in several filings for surveillance warrants in the FISA Court, is currently under scrutiny by Attorney General William Barr and his team of investigators. This investigation, if carried through, will show that the only “spying” against Americans which took place during the 2016 campaign was instigated by British intelligence, and that all of the allegations of Russian hacking are outright lies.

In the case of Iran, to understand anything one has to recognize that Iran has been targeted by the British directly in the name of “geopolitics.” Documents released in 2013 on the overthrow of Iran’s elected President Mohammad Mosaddegh in 1953, demonstrate how the U.S. acted under British direction to carry out the regime change. The CIA operation, code named TPAJAX, was coordinated with MI6 and its Operation Boot. One of the declassified documents reports that Mosaddegh “found the British evil,” and that “he and millions of Iranians believed that for centuries Britain had manipulated their country for British ends.” The current war drive against Iran is being coordinated by the same geopolitical networks centered in London that were identified by Mosaddegh more than 60 years ago. 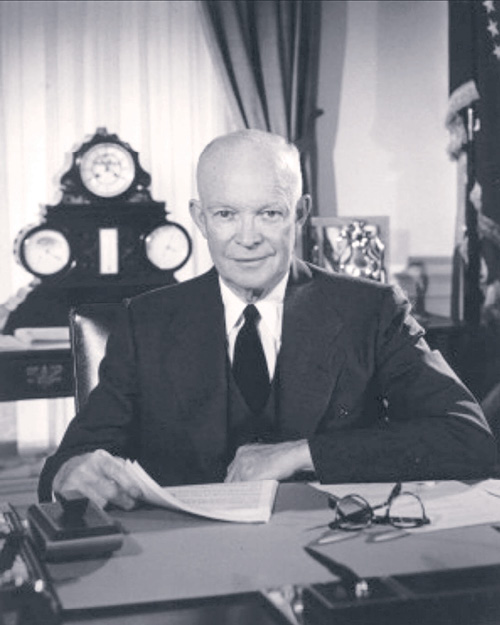 What is the Military Industrial Complex?

The naming by President Trump of the Military Industrial Complex as a continuing force in pushing for war, echoes the famous Farewell Address of U.S. President Dwight Eisenhower, delivered on January 17, 1961. While speaking of the necessity for large expenditures for national defense as the Cold War dominated American strategic concerns, Eisenhower sternly warned against the power that was being accrued in the name of defending the American people:

In the councils of government, we must guard against the acquisition of unwarranted influence, whether sought or unsought, by the military industrial complex. The potential for the disastrous rise of misplaced power exists and will persist.

We must never let the weight of this combination endanger our liberties or democratic processes. We should take nothing for granted. Only an alert and knowledgeable citizenry can compel the proper meshing of the huge industrial and military machinery of defense with our peaceful methods and goals, so that security and liberty may prosper together.

Eisenhower’s warning of the threat emanating from the Military Industrial Complex was confirmed by events in subsequent years. His successor, John Kennedy, was confronted, immediately upon his inauguration, by the Bay of Pigs crisis, in which the intelligence network of CIA Director Allen Dulles—a long-time collaborator with the highest levels of British intelligence, going back to his World War II work in protecting Nazis in Switzerland—and his London allies, worked together with U.S. military utopians to launch an invasion of Cuba. Though Kennedy blocked them from following through with their scheme, the event set in motion an escalation of Cold War confrontation which resulted, in 1962, in a nuclear showdown with the Soviet Union in the Cuban missile crisis. In both cases, Kennedy’s leadership overcame the treacherous operations run by these corrupted military intelligence networks and thwarted British geopolitical designs.

In November 1963, Kennedy’s life ended in Dallas, Texas, in a murder that has been covered up to this day. Less than a year later, the faked or staged attacks in the Gulf of Tonkin became the pretext for the deployment of more than half a million U.S. troops to Vietnam. The United States had begun to destroy itself in a no-win war arranged by Britain—as historian Derek Leebaert proves anew in his 2018 book, Grand Improvisation: America Confronts the British Superpower, 1945-1957.

Dwight Eisenhower’s fight, John Kennedy’s fight, and now Donald Trump’s fight has been to break the power of the war party, a party that has operated in lockstep with the British Empire since the Truman presidency. Many Americans are very confused as to such strategic matters. They fail to see who it is that has been leading us into one bloody war after another. Many Democrats hysterically deny the overwhelming evidence that Hillary Clinton was the candidate for the war party, and some Trump supporters still identify the “deep state” or “liberals” as being behind the targeting of President Trump.

The recent comments by Trump, identifying the British role in initiating the Russiagate coup attempt against his presidency, and now his attack on the Military Industrial Complex, threaten a situation in which “all the trees in the forest could fall.” The drive to remove Trump from office and the drive for war are now being openly identified as one operation, and the role of British intelligence is in the rifle sights of the Attorney General.

The vilification of America’s most profound intellectual, Lyndon LaRouche, was run by these same British networks and their U.S. operatives in both parties, precisely because he identified the core perversion of the British, which was their promotion of an anti-human divide-and-conquer geopolitical doctrine to keep mankind engaged in perpetual wars, usually over “scarce resources”—scarce only because the same British networks destroyed the scientific and economic method required for mankind to advance.

By identifying the Military Industrial Complex as the source of the war danger, President Trump has placed in the hands of the American people the means to defeat them. As Eisenhower stated that “Only an alert and knowledgeable citizenry” has the power to protect against the threats to mankind from the evil of the Military Industrial Complex, Trump today is calling on citizens to back the fight against them. Making American citizens “alert and knowledgeable” was the life’s work of Lyndon LaRouche. It is time to achieve the goal which he defined, to free the world from that beast known as the British Empire.

[fn_1]. See article, “President Trump Orders Declassification: What Did the Queen Know and When Did She Know It?” by Barbara Boyd, in this issue of EIR. [back to text for fn_1]