This editorial appears in the August 2, 2019 issue of Executive Intelligence Review.

Democrats and Mueller in Historic Failure 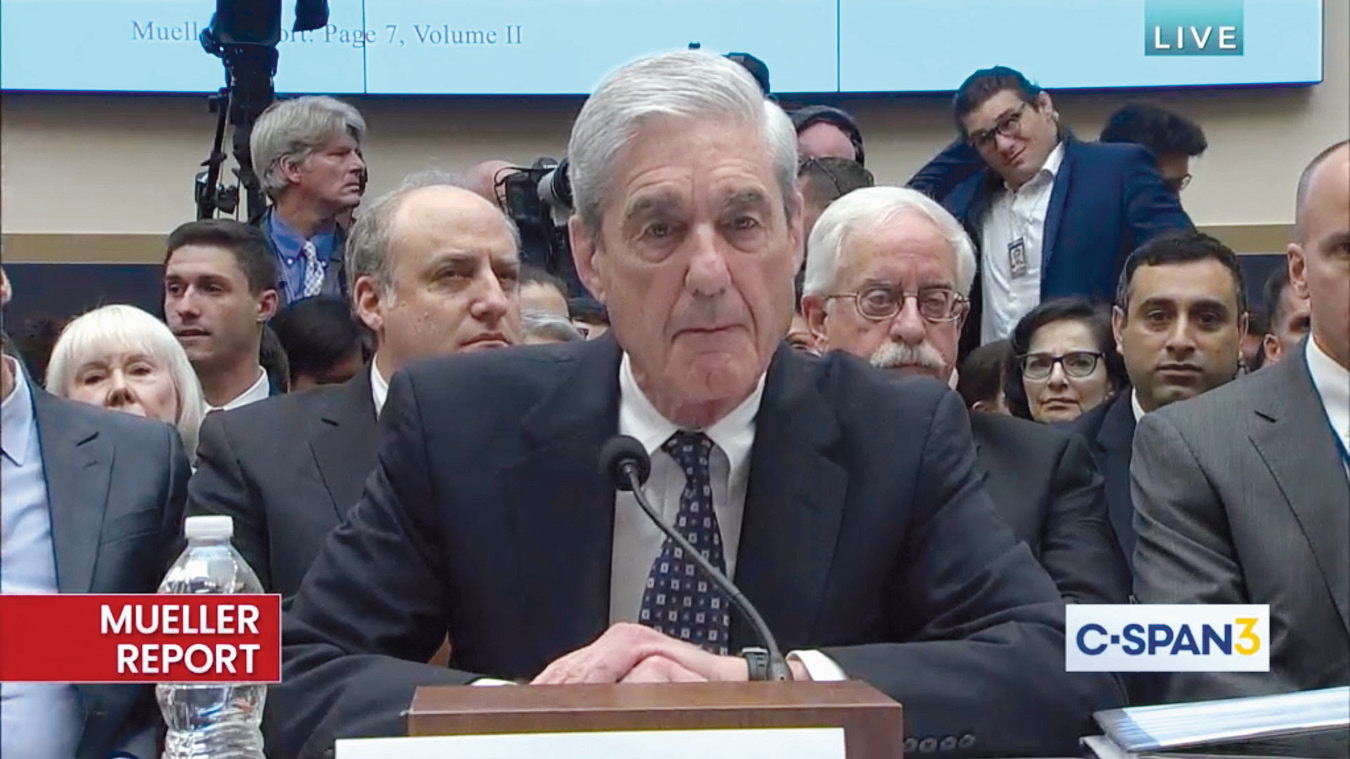 July 24—On May 29, Robert Mueller stood at the podium at the U.S. Department of Justice, and read—laboriously and in a shaky voice—a ten-minute statement whose bottom line was that he wished to vanish immediately into private life. The Democrats on the House Judiciary and Intelligence Committees should have paid attention. They did not.

On July 24 Mueller testified before two Congressional Committees. Within the first ten minutes of his much-touted testimony, it became clear that, as with the Russiagate hoax itself, there is “no there, there,” when it comes to the Special Counsel himself.

Former Assistant U.S. Attorney Andrew McCarthy tweeted that, based on Mueller’s wandering, evasive, and sometimes incoherent answers, “It is inconceivable” that Mueller was involved at all in his own investigation! Former President Barack Obama’s political guru, David Axelrod, pronounced the hearings “extremely painful” to watch and sought to couch what everyone plainly observed in the most polite and sensitive terms possible. Constitutional scholar and Obama advisor, Laurence Tribe, declaimed that Mueller, himself, had “sucked the life out of his report” during the morning’s hearing. Fox’s Chris Wallace, no fan of Donald Trump, pronounced the hearings a disaster for the Democrats and for Mueller’s reputation. Former Congressman Trey Gowdy noted, sadly, “The person who learned the most about the Mueller Report today was Bob Mueller.”

The hearings proved what President Trump has repeatedly tweeted. The witch hunt was run entirely by the angry Democrats Mueller hired to go after Trump, with Mueller himself serving as a largely empty suit of “rectitude.” Those familiar with Edgar Allan Poe will be reminded of his tale, “The Man Who Was All Used Up.”

For those who did not watch, or fled after the first few minutes, here are the salient points.

The Nub of It

1. The morning hearing before the House Judiciary Committee consisted of each House Democrat attempting a dramatic reading to Mueller of the “five episodes” of possible obstruction of justice cited in Mueller’s report, trying to elicit the conclusion that this was clearly felonious conduct. Mueller responded on most occasions that he would not endorse the conclusion advanced, and, in an obviously rehearsed fashion, proclaimed that he either “supported” his own report, or would not go beyond the report.

Mueller asked to have questions repeated to him, or for citations to his own report to be repeated, even though the citations themselves were displayed on a video screen in front of him. Each exchange would end with the Democratic Congress person chanting, in some rehearsed fashion, “No one is above the law.”

According to numerous press reports, the Democrats had rehearsed their performances endlessly and detailed their makeup for Prime Time TV.

Of course, Mueller himself concluded that he could not reach a decision about obstruction of justice despite also concluding that the President was innocent of the underlying crime or crimes he was investigating. He also admitted today, repeatedly, that his investigation was not, in fact, obstructed.

The key element to prove in prosecuting obstruction of justice is corrupt intent. If the President honestly believes he is the victim of a witch hunt and prosecutorial abuse, then expressing his anger and frustrations with this process—the episodes described by Mueller’s attack dogs—can never constitute corrupt intent.

2. The Republicans focused on the fact that the Mueller Report and investigation completely evaded profound questions about the origins of the Russiagate hoax, the illegal tactics used to concoct that hoax, the bias of Mueller’s investigative agents, the illegalities in Mueller’s investigation itself, and the fact that the Mueller Report itself did not present exculpatory information, particularly with regard to the “five episodes” of possible obstruction of justice.

Mueller refused to answer any of these questions, including on topics which were covered in his report. Astoundingly, and as if to prove Andy McCarthy’s tweet, Mueller announced that he was not familiar with the Clinton Campaign vendor, Fusion GPS, the firm that hired Christopher Steele.

Popular columnist Matt Taibbi, tweeting about the Special Prosecutor’s mental acuteness, noted, “Anyone who lines a parrot cage with newspaper would know that.” 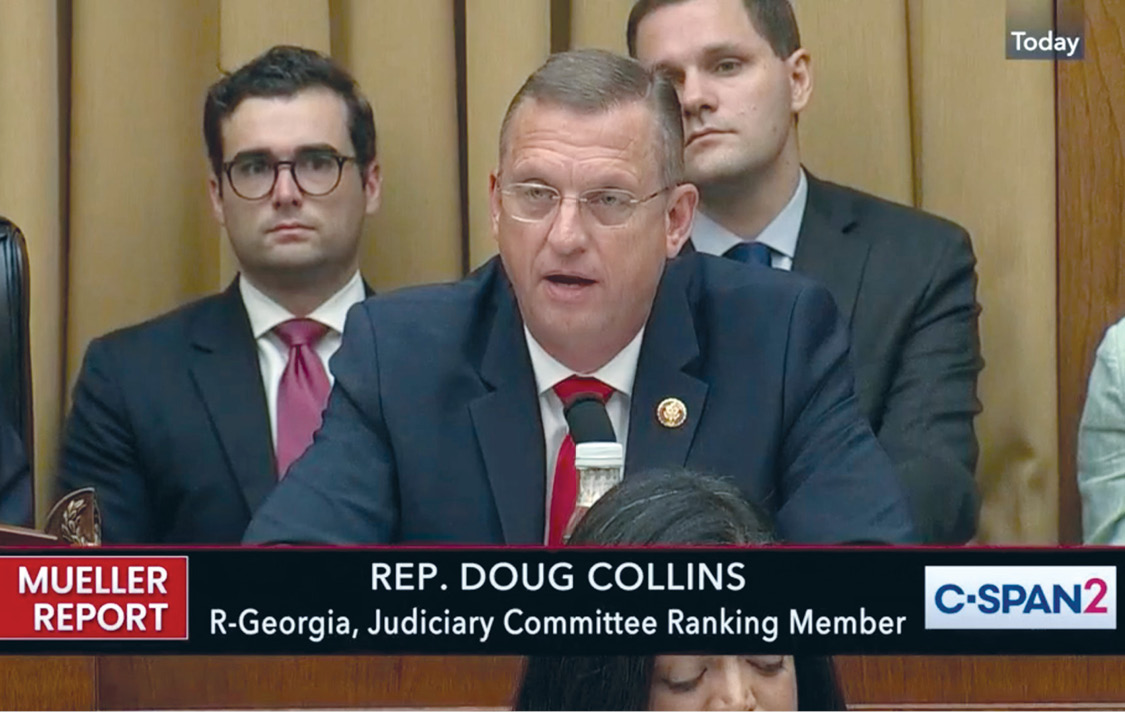 3. Rep. Doug Collins hit the nail on the head as to what the whole “obstruction of justice” fraud—presented in the morning Judiciary Committee hearing—was all about. While Mueller said that there was insufficient evidence to link anyone in the Trump Campaign to alleged Russian interference in the election, whoever actually wrote his long fictional novel claimed that the Special Counsel “could not exonerate” the President with respect to obstruction of justice.

Collins asked where, anywhere, in the laws of the United States or Justice Department regulations, is “exoneration” part of a prosecutor’s duties. Mueller admitted that there was no such authority. In fact, for Mueller to undertake this fake duty completely undermines the constitutional presumption of innocence.

4. The Democrats had an orgasm over Mueller seeming to respond to Rep. Ted Lieu in the morning session to the effect that, were it not for a Justice Department Office of General Counsel opinion that a sitting President can not be indicted, Trump would have been indicted for obstruction. However, Mueller retracted that testimony and any such inference at the beginning of the House Intelligence hearing in the afternoon. 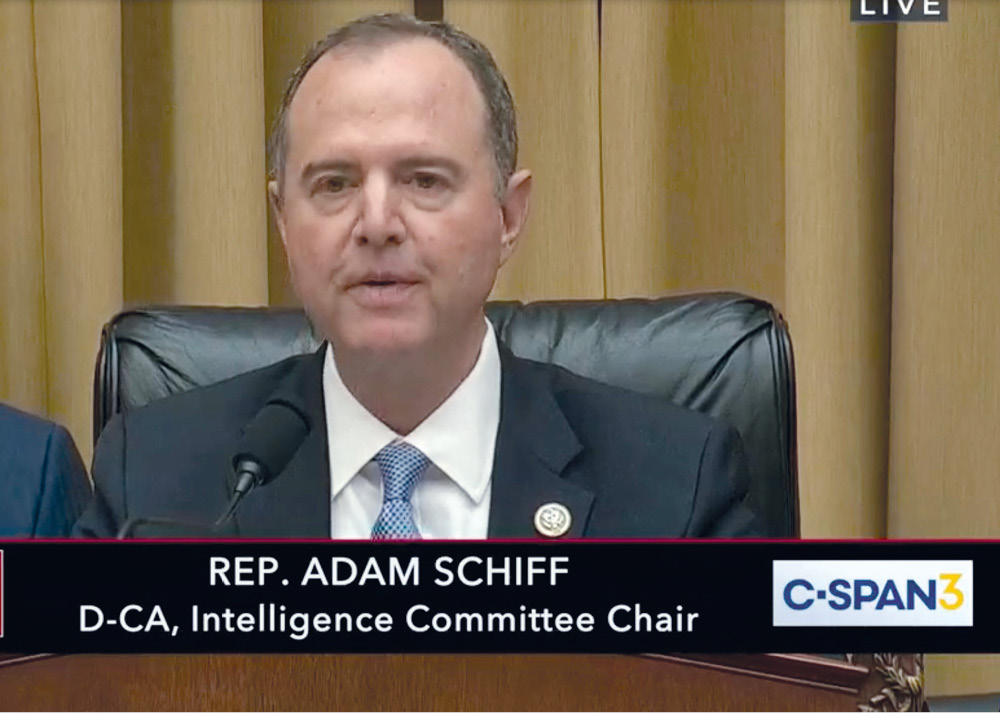 5. The afternoon session featured Rep. Adam Schiff pontificating on the President’s alleged disloyalty for not going after the Russians with the McCarthyite fervor presently on display throughout Washington, D.C. Other Democrats pontificated about the President’s “greed” and “business motivations.” 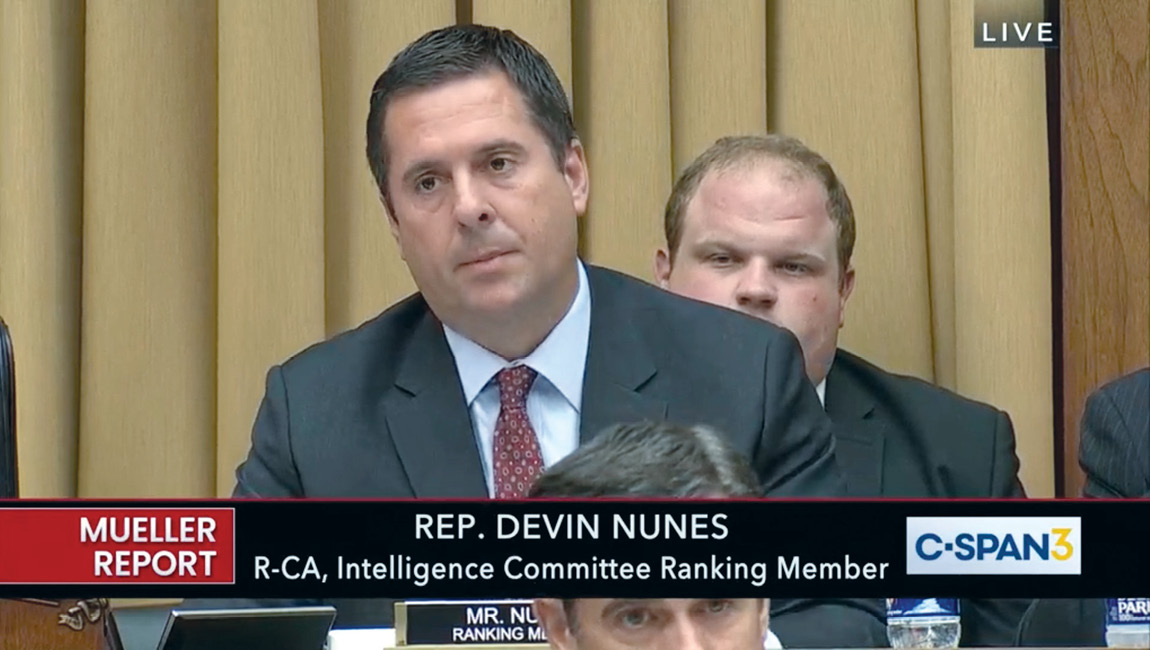 The only revelation came in the opening statement of Rep. Devin Nunes who noted that this national nightmare—initiated as James Comey’s FBI investigation of a sitting President—resulted not from any intelligence agency product, but rather from a tip from a former foreign politician about Joseph Mifsud. That politician appears to be Australia’s former Ambassador in London, the imperial spook, Alexander Downer. Mifsud’s role as a Western intelligence plant tasked to entrap George Papadopoulos was extensively reported on July 23 by The Hill’s John Solomon.

With impeachment now dead, and the transition to the investigation of the investigators kicking off, we are certain to learn a whole lot more about this. As the President tweeted after Mueller left Capitol Hill, “THE TRUTH IS A FORCE OF NATURE!”

The nexus behind this monumental fraud is now itself under investigation. Attorney General Barr’s appointment of respected U.S. Attorney from Connecticut, John Durham, and the expected imminent release of an investigation conducted by Justice Department Inspector General Michael Horowitz, into the use of the Steele dossier in the filing for a warrant before the Foreign Intelligence Surveillance Act (FISA) court to “spy on” the Trump campaign, has truly spooked the coup plotters. What Trump has called the “greatest political scandal in U.S. history” will be exposed, and many of the key players are fearful that they now face prison for their crimes. 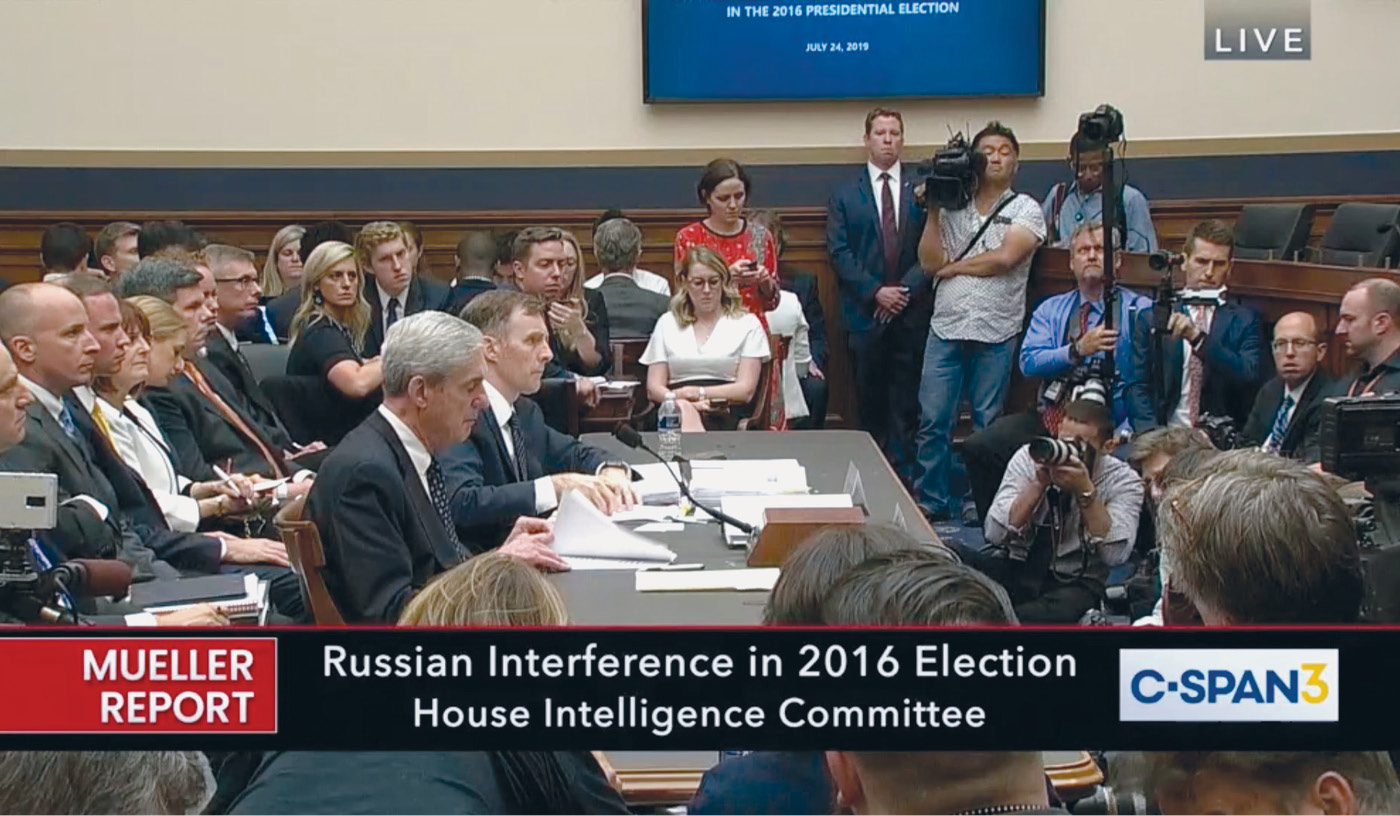 A key element in this is debunking the final, major lie still standing in the Mueller report, that Russia did intervene in the 2016 election. In his one, un-fumbled (but lying) statement in the hearings this week, Mueller asserted that Russia is continuing to interfere: “They’re doing it as we sit here,” he said, and this became a major theme for those clinging to the hope of impeachment.

Typical is the editorial of the “Never Trump” New York Times on July 25, which wrote that Mueller was “trying, in his halting words, to sound the alarm . . . about Russian subversion of American democracy.” Describing the “evidence” of Russian hacking as proof of the malign intent of Putin, the Times called this the report’s “most unequivocal finding,” in exposing the “sweeping and systemic nature” of Russian interference. In asserting this, the editors characterized the questions of some Republican committee members about Fusion GPS, the Steele dossier, and the texts of Peter Strzok and Lisa Page, as “bluster and misdirection.”

Such an obvious cover-up merely highlights the hysteria of those behind Russiagate. By sticking to the narrative, they are giving more rope to the hangman.

The challenge to the “Russian hacking” narrative was laid out by former National Security Agency technical director and whistleblower Bill Binney, who has conducted the only serious forensic investigation of this charge. He and his colleagues found that it is impossible that Democratic National Committee (DNC) files were stolen by an internet “hack.” Binney will soon present the evidence for this in a courtroom, as he has been called as a defense witness in the last pending Russiagate trial of an American, that of Roger Stone.