This editorial appears in the September 27, 2019 issue of Executive Intelligence Review.

The Other Coalitions Are Blowing Up: The LaRouche Coalition Must Take Over! 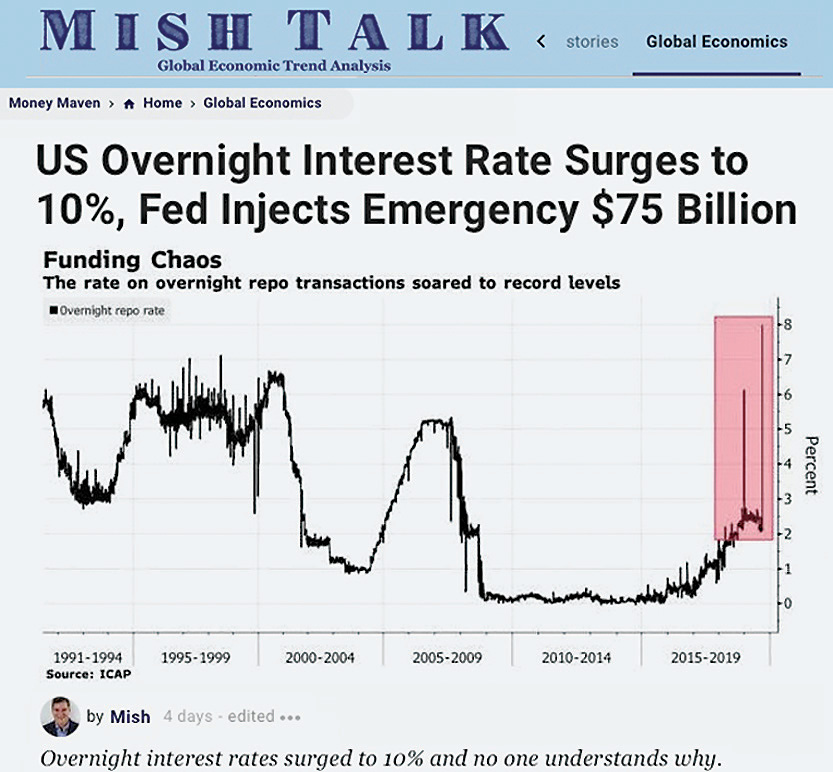 Sept. 19—After the Federal Reserve injected over $200 billion cash into the Wall Street Banks over the past three days, for the first time since 2008-09—yet still failed to push interest rates down into their target range—London and Wall Street are beginning to panic over the near-term stability of their rotten system.

As Helga Zepp-LaRouche first pointed out, their hope for a last-ditch defense is to use the fraudulent panic over so-called climate change, to forcibly channel investment into the “green” schemes they control through cut-outs such as London’s Green Finance Initiative, shortly to be exposed in a new Schiller Institute report. It is this sordid motive which is behind the so-called climate initiatives ongoing at the United Nations today—where LaRouche organizers are present—and the New York School System’s blatant pressure on students and their parents to support a “green” strike this Friday.

At the same time, significant, relevant political shifts are ongoing both in Republican and Democratic circles, so-called. Politico magazine, in stories on Wednesday and Thursday, highlights certain features of the Bolton firing that shed great light on the present political situation in the United States.

As opposed to the analysis presented in the press internationally, that Donald Trump is somehow the captive of John Bolton or Mike Pompeo, the implications here are far more pragmatic and optimistic concerning the dynamic of the President and the corrupt Republican apparatus he used to get elected. Both establishment hawks, Bolton and Pompeo, are representative of substantial Republican Party political factions that helped propel Trump’s insurgent candidacy to victory in 2016. The firing of Bolton, and Pompeo’s likely decision to run for Senate in Kansas, point to Trump finally freeing himself from the establishment Washington, D.C. Republican Party, as their loud complaints to Politico indicate. They call Trump, now, “a government of one,” something which many Trump voters, who chanted, “Drain the Swamp,” obviously intended.

Similar fissures are occurring in the Democratic Party over impeachment. Jerrold Nadler is leading farcical House Judiciary hearings, which this week featured Trump’s 2016 campaign manager Corey Lewandowski reprising portions of the Mueller Report. Nadler’s Democrats, frustrated by Lewandowski’s calmly facing them down over testimony he provided on Trump’s orders to Mueller, resorted to angrily throwing names at him, threatening him with criminal charges, and wildly asserting that his sticking to what he told Robert Mueller signaled “consciousness of guilt.”

Lewandowski told Mueller that the President had asked him to deliver a message to Attorney General Jeff Sessions that Sessions should “un-recuse” himself from the Trump/Russia investigation, and should focus that investigation on protecting future elections. This occurred in a context in which the FBI’s James Comey was repeatedly telling Trump that he was not a target of the FBI’s counterintelligence probe, and in which the investigation by the President’s equally diligent lawyers could find no wrongdoing by his campaign.

House Speaker Nancy Pelosi openly criticized the Nadler circus to a stunned Democratic caucus behind closed doors last week, according to Politico, noting that the Judiciary Committee was way, way ahead of its skis, and the Democrats in the House did not have the votes to support impeachment. Sticking the shank in, she said, “Go ahead and leak that fact,” concerning the lack of Democratic support for impeachment. At the same time, this week the Jacobin Democratic presidential candidates launched a new, unhinged impeachment drive against Justice Brett Kavanaugh based on a totally fake New York Times story which had to be substantially retracted by the Times, further compromising their 2020 chances.

The shifting dynamics here occur as both the Trump Campaign and the Democrats see the revolt within the American population—demanding industry, infrastructure, and real jobs—as the Wall Street casino begins to collapse. The Democrats are positioning themselves through the genocidal Green New Deal, which LaRouche organizers are exposing, and by making claims about Wall Street reform. The Trump Campaign is looking for an actual economic policy that can build the modern infrastructure required for economic recovery, while funding basic scientific advances, including those needed for fusion power and space travel—a policy readily available in Lyndon LaRouche’s Four Laws for Economic Recovery. That’s the real New Deal, the LaRouche New Deal, rather than the Green New Deal, which will destroy everyone who touches it, like Medea’s poisoned gown. 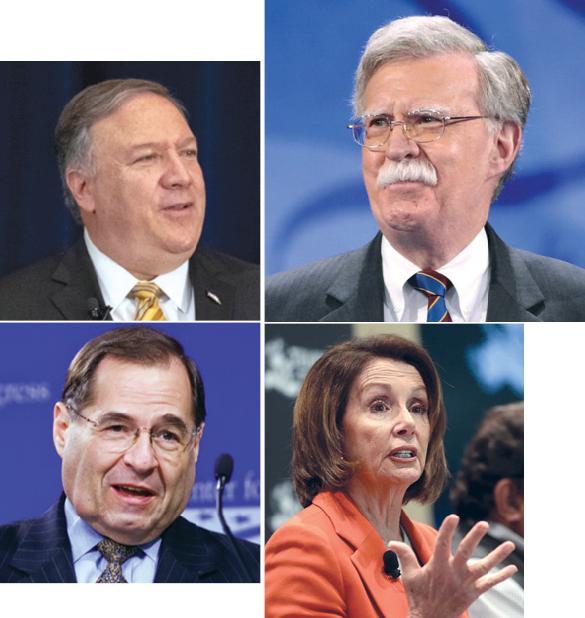 Whom Do Bolton and Pompeo Represent?

Gatestone, once a part of the Hudson Institute and funded by Sears Roebuck heiress Nina Rosenwald, has featured such neo-cons as James Woolsey, Elliott Abrams, William Kristol, and other direct authors of the Iraq War, along with British Thatcherite Tories including Baroness Caroline Cox, Lord Daniel Finkelstein OBE, and the Viscountess Bearsted.

Bolton attacked all of Trump’s foreign policy initiatives at the luncheon. He apparently claimed that Trump had stopped a Bolton-orchestrated attack on Iran after the June 20th shoot-down of an American drone, because of last-minute appeals by Tucker Carlson. He claimed that had that attack gone forward, Iran would not have attacked Saudi Arabia’s oil refinery. Particularly rich, was Bolton’s characterization of Trump’s invitation to the Taliban for peace negotiations at Camp David on the eve of the 9/11 anniversary, as an insult to the 9/11 families. Bolton, of course, was an author of the policies which led directly to the death of 3,000 Americans on that day of infamy.

Tucker Carlson has responded to the Bolton-instigated attacks on him by calling the neo-cons “leftists.” Carlson noted that Samantha Power, Barack Obama’s UN Ambassador, blasted Bolton’s firing. Carlson was alluding to the fact that the first generation of neo-conservatives were followers of Leon Trotsky—card-carrying members of the Fourth International. They changed Trotsky’s core idea of permanent revolution into the neoconservative wet dream of permanent warfare and permanent regime change—facts fully developed in Lyndon LaRouche’s Children of Satan series of pamphlets following the events of 9/11.

Bolton, Steve Bannon, Breitbart News, the data firm Cambridge Analytica, and Kellyanne Conway were all Mercer family properties during 2016, and originally supported the British Tory choice, Senator Ted Cruz. Robert Mercer made his billions on Wall Street, manipulating data for currency and other speculation through computer modeling. Typical of his social skills, was his spending over $2.7 million on a model train set for himself. He conducts his politics through his daughter Rebekah, a rabid libertarian and a major financial angel in Republican/Tory circles in both the U.S. and Britain. Mercer sponsored Bannon’s creation of the so-called “alt-right” out of enraged young males primarily addicted to gamer culture. The Mercer group, by all accounts, injected both structure and millions of dollars in cash into Trump’s general election campaign and claimed that this entitled them to a seat at the table.

Pompeo and Mike Pence represent another key Republican constituency within the George H.W. Bush-built Republican Party, the Christian Zionists, a sect created by British intelligence. These alien forces have embedded themselves in the evangelical population in the U.S., and are strident in their support of Israel, but not for any reason that would please the Israeli people. They believe that the ultimate destruction of Israel in Armageddon will bring about the second coming of Christ. Trump was told that he needed this constituency to secure the evangelical vote in 2016, a key to Republican Party success. However, many evangelicals are more than satisfied with the President’s pro-life positions and appointments to the Supreme Court, without the added component about blowing up the world. 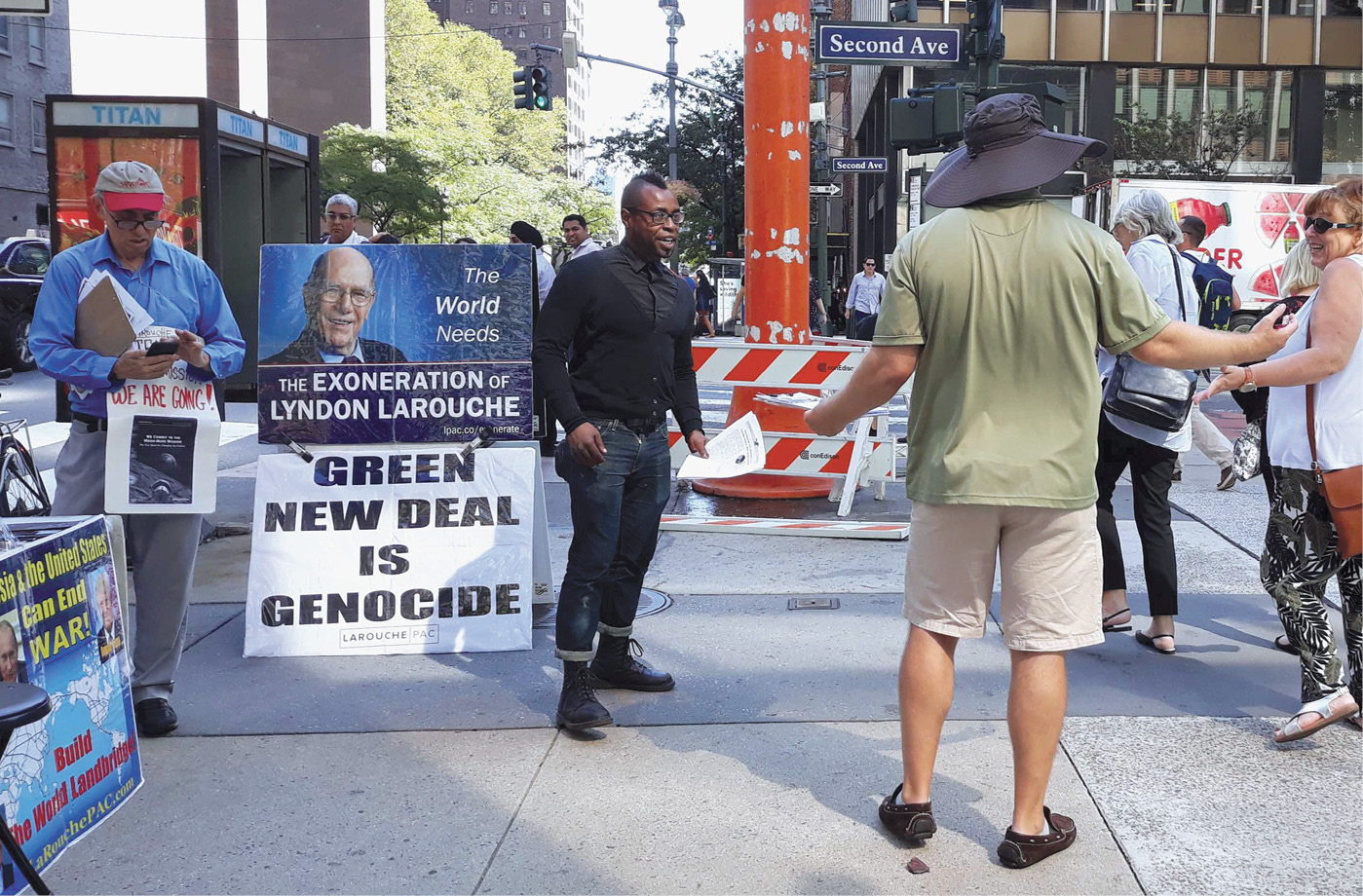