This editorial appears in the October 11, 2019 issue of Executive Intelligence Review.

by Barbara Boyd and Dennis Speed 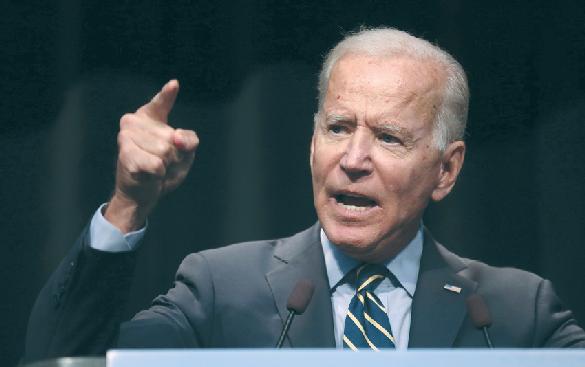 Oct. 2—Although the Joe Biden 2020 Presidential campaign is now finished, as a result of the already-released and soon-to-be-released Ukraine revelations, it may very well drag on for several weeks before it has officially been declared dead. An accurate autopsy as to what the cause of death was, however, will not be submitted by the Fake News media to the American people, under any circumstances.

“This is pre-eminently the time to speak the truth, the whole truth, frankly and boldly,” said President Franklin Delano Roosevelt in March 1933.

“As I learn more and more each day, I am coming to the conclusion that what is taking place is not an impeachment, it is a COUP.” These are the words of Donald Trump, and this is increasingly becoming the inevitable conclusion (even before the Barr and other investigations are completed), which anyone that confronts the present crisis must consider—even the most perplexed.

Just as FDR faced a fascist bankers’ coup against his Presidency, in 1934, so Donald Trump faces one today in 2019, led by Mark Carney, Governor of the Bank of England, as well as by a treasonous faction of American intelligence now being deployed through the Former-Democratic Party’s campaign for impeachment of the President of the United States. It is through looking at the Presidential investigation of Ukraine, and of Joe Biden, that the ugly truth about the “bankers’ coup” is best revealed, at the moment. 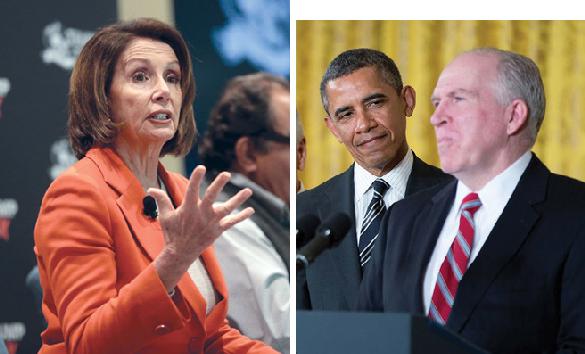 The President of the United States is committed, as his oath of office requires, to finding out the role foreigners played in the 2016 election meddling directed against him by the Obama White House and John Brennan’s CIA. The big question is whether the British were running the whole show of illegal surveillance and black propaganda against Trump centrally, or whether Obama and Brennan also farmed it out to other nations. This investigation threatens to pull the entire filthy Anglo-American intelligence apparatus down, including Speaker of the House Nancy Pelosi, who has recently described the intelligence community as “her wheelhouse.” Is Pelosi now the acting chairman of “the intelligence agency formerly known as the Democratic Party”?

Obama/Biden, Hillary Clinton, and their entourage used the awesome powers of “Five Eyes” surveillance and propaganda—called in the intelligence trade, “public diplomacy”—first to attempt to rig the 2016 election (which failed) and then to undermine Trump’s presidency. They then claimed that all of their illegal activities were committed in the service of chasing a plot by the Russians to “undermine the elections and blow up the world.” This 1950s-style “Russian plot” story was manufactured to prevent Trump from making peace with Russia, which is against the unnatural globalist “national interests” of Wall Street and the City of London financial district. 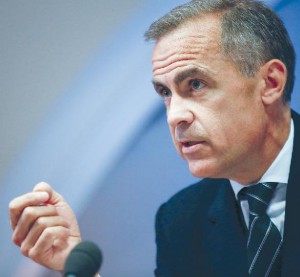 The City of London and Wall Street financial houses, which the intelligence mandarins serve, are on the edge of another blowout, bigger than 2007-08. Bank of England Governor Mark Carney called for “financial regime change” in Jackson Hole, Wyoming, in late August. That means “take aim against the United States’ sovereign national credit system.” They know Donald Trump won’t tolerate that. Trump stated at the United Nations: “The future belongs not to the globalists. The future belongs to the patriots.”

The “Green New Deal” which these bankers—not the environmentalists—originated, is nothing but a return to “ecologism” and the zero population growth schemes of the 1930s European-style ecofascism. The Green New Deal is a design for new massive austerity and genocide to be imposed on Africa, Asia, and South America that is supposed to somehow appear to be a heroic defense of “mother nature.” The shutdown of fossil fuels is the only way, other than thermonuclear war, to reduce the population by billions in the short term. That is why Mark Carney, Michael Bloomberg, Christine Lagarde, and others want a supranational “green banker’s dictatorship.”

Trump, on the other hand, has proposed: space exploration to the Moon and Mars, to discover the higher laws that can power our “terrestrial” economy; reindustrialization of the United States on a modern infrastructure platform; and nation-state to nation-state treaties. Durable human survival requires rejecting totally the globalist framework that has been destroying the U.S. and increasing the risk of world war.

To stop this, the intelligence community, acting through House Speaker Pelosi and the zombie Congress, is attacking the U.S. Constitution itself in their bloodlust to take Trump out. They wish to treat the United States as they treated Chile in 1973, Guatemala in 1954, Iran in 1953, etc. They seek to ban Trump supporters’ speech, and that of others as well; they seek to destroy the President’s powers under Article II to conduct foreign policy; they seek to end the executive role of the President enshrined by our founders. They are involved, in the President’s words, in a full-scale coup d’état, to transform the United States into a British-style parliamentary system, preventing any effective role for the nation’s citizens in determining their future.

So, what are you, the American people, prepared to do about it? Before you make the potentially fatal mistake of deciding to “not get involved,” read on.

The Joe Biden scandal concerning Ukraine goes far, far beyond the millions of dollars awarded to Biden’s son, Hunter, for use of the Biden name on various dirty corporate boards in Ukraine and China. As of February 2014, Joe Biden was the U.S. point-man on the Ukraine coup atrocity. The 2014 Ukraine Maidan uprising was aimed at creating a violently anti-Russian, International Monetary Fund controlled regime on Russia’s border, thereby creating a hair-trigger for thermonuclear war. Barack Obama and Hillary Clinton surpassed the most right-wing of neocons, working directly with known fascists for this purpose. An estimated $5.1 billion in U.S. taxpayers’ dollars was spent on this effort, which set the world on a march toward thermonuclear Armageddon. 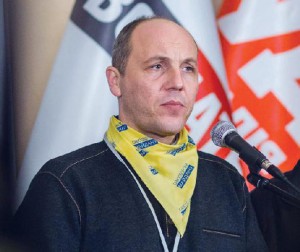 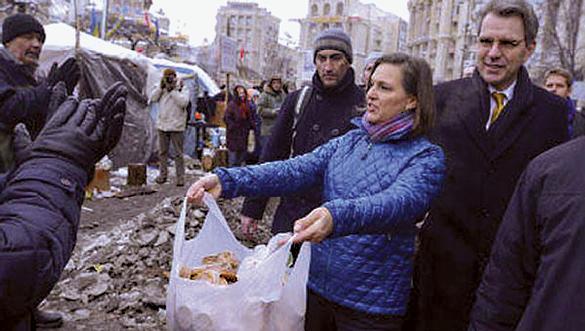 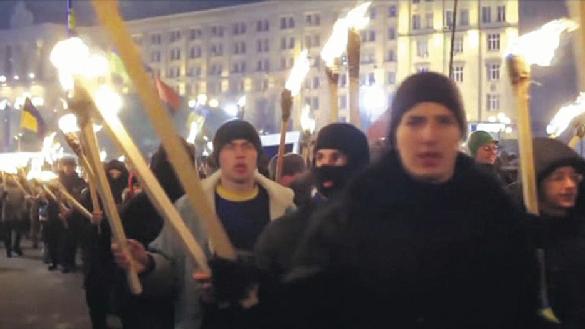 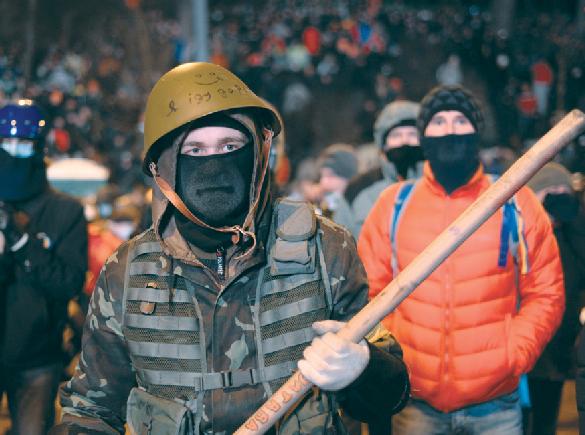 CC BY-SA 3.0
Masked demonstrators armed with shovels at the Maidan in 2014.

Donald Trump’s election and his promise to seek positive relations with Russia temporarily stopped the mad war drive. The shock troops used by Joe Biden and Victoria Nuland to pull off the coup against Ukraine’s duly elected President, Viktor Yanukovych, were certifiable neo-Nazis, supporters of the World War II Ukrainian butcher Stefan Bandera, who mass-murdered thousands of Poles and Jews. The full dossier on that Nazi coup in Ukraine was reported in a package of articles in the February 24, 2017 issue of EIR, pages 4-20. The Ukrainian-American network surrounding the Chalupa sisters that works with the Democratic National Committee, the Department of Justice, and the State Department to destroy Trump’s candidacy, also supports Bandera’s legacy.

Nazi Devils in the Details

Who were the Bidens’ friends in Ukraine?

“Papa” Joe made various forays to Ukraine to impose shock austerity on the population under terms dictated by the IMF. Biden personally assisted in the reshuffling of Ukraine’s oligarchs so that only those who were rabidly anti-Russian survived. Thousands of Ukrainians died at the result of the civil war in eastern Ukraine and IMF austerity in western Ukraine, while the looting of the economy by the oligarchs was protected by Joe and his friends.

Burisma Holdings, which hired Hunter Biden, is nominally owned by Mykola Zlochevsky, an oil and gas oligarch. It is actually owned, however, by a notorious Ukrainian gangster, Igor Kolomoisky. Kolomoisky had been a significant supporter of the new Ukraine President, Volodymyr Zelensky, despite Kolomoisky’s well-earned reputation as a fraudster, violent thug, and overall international crook. It is Kolomoisky who has provided the most substantial funding for the war in Eastern Ukraine and the Azov Battalion. Following Hunter Biden’s receipt of his Ukraine riches, Kolomoisky was removed from lists banning his travel to the U.S. and his notorious career was whitewashed, despite the fact that national and international financial agencies still viewed him as an entrenched crook. Hence, the President might have been referring to this when he questioned Zelensky in the infamous transcript as to whether the “same people” were around him as were involved in the corrupt dealings with Hunter Biden. 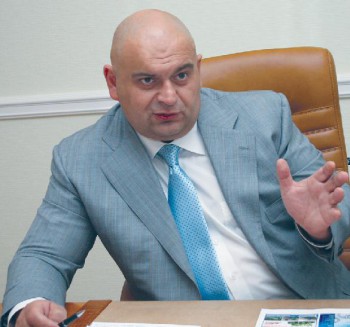 In June 2018, Michael Carpenter, Joe Biden’s chief sidekick in his Ukrainian perfidies, brought Andriy Parubiy, then the neo-Nazi speaker of Ukraine parliament, to meet with the U.S. Congress about lethal aid to Ukraine to continue the genocide in eastern Ukraine. When journalist Max Blumenthal confronted Carpenter with the fact that Parubiy had founded two neo-Nazi parties, the Social National Party and the Patriot of Ukraine Party, Carpenter said that Blumenthal was pitching “Russian propaganda.”

Papa Joe’s Ukraine activities have had devastating blowback worldwide, including in the United States. Four white nationalists who trained with the neo-Nazi Azov Battalion, now part of Ukraine’s National Guard, participated in the August 11-12, 2017 Unite the Right white supremacist riots in Charlottesville, Virginia; and the Christchurch shooter in New Zealand, whose manifesto influenced recent mass shooters in the United States, also says he visited and trained with the Azov Battalion. William Jarrett Smith, the U.S. Army soldier recently arrested for plotting bomb attacks on American media outlets and Democratic Party politicians, was also an Azov trainee.

So, when Joe Biden opened his vacuous campaign for President with gauzy footage from Charlottesville, proclaiming himself the hero in a fight for America against what he claims Donald Trump represents, think about what you were bamboozled to think, and what was actually going on.

What You Can Do

Join us in stopping this coup right now. Find out if your congressman has joined the intelligence agency/bankers’ coup against the Presidency. Tell him or her to knock it off! Demand full disclosure of British and other foreign intelligence interference in the election of 2016, and the coming election of 2020.

This fraud cannot be allowed to continue with a financial crisis on the horizon. The nation needs to come together, now, behind a true program for economic recovery, a program found in Lyndon LaRouche’s Four Laws for Economic Recovery: Glass Steagall, to prevent a new bailout at citizen expense; a National Bank, to fund the huge infrastructure projects we need to get the country moving fully again; a renewal of the crash programs on the frontiers of science, such as fusion energy development and space exploration. We need an agreement with Russia, China, and India, now, for a new fixed exchange rate monetary system, and for joint development and scientific projects.

The redirection of the economy toward the production of capital goods, city-building, and modern industry, will ensure that wages and public services are at a level sufficient for family formation, for quality healthcare, and for an education that fosters human creativity—the actual driver of any economy. The warmongers, and those who conducted this insurrection against the President, need to be exposed and jailed.

Remember: It is the American electoral process which decides who the President is—not treasonous factions of the intelligence community masquerading as elected officials.