This editorial appears in the November 29, 2019 issue of Executive Intelligence Review.

House Closes Out Impeachment Charade as Members Head to Districts

What Citizens Do Now is Critical 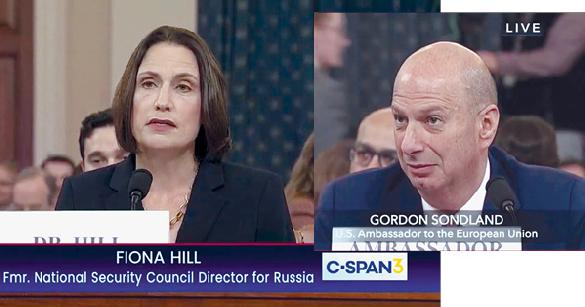 Barbara Boyd’s live webcast interview with Matthew Ogden on Saturday, November 23 provides the latest political update on the impeachment hearings, and the story behind the story, with extensive video documentation.

Nov. 21—The initial phase of the House Impeachment show trial paused today with the testimony of anti-Russia hawk Fiona Hill and State Department bureaucrat David Holmes. Members of Congress will be out in their Districts through December 3. While most believe that the Democrats will now draft articles of impeachment and move the process to the Judiciary Committee, even that is uncertain, as the New York Times on November 21 called for the Democrats to slow down and force more ridiculous testimony down the throats of the American people, who remain unconvinced that the President should be impeached.

Hill’s testimony was part of a coordinated PR campaign in Washington to resurrect the bogus “Trump is an agent of Putin” hoax. Hill claimed that Ukraine interference in the election was a Russia inspired-hoax, and the media, including Fox, responded by saying that she was the “star of the show.” Hill also showcased the narrative that Rudy Giuliani and others investigating Ukrainian interference in the 2016 election, were really doing so for personal gain. The same brainwashing campaign involves a renewed assault on Congressman Devin Nunes, as a dupe and a fool who does not understand Russian active measures.

For those charmed by Hill’s recounting of her background as an English coal-miner’s daughter whose low-class British accent would have stymied her ambitions in Britain—take a look at the background of this woman. She was the National Intelligence Officer on Russia and Ukraine in both the George W. Bush and Obama Administrations, in which she advanced cold-blooded policies that placed the world on the edge of war. While claiming to believe that Russia and the U.S. must work out new relationships, she personally hates President Putin, and is an active participant in the British campaign to overthrow him.

David Holmes, counselor at the U.S. Embassy in Kiev, provided his self-important account of U.S./Ukraine relationships as a prelude to his claim that he overheard the President asking Gordon Sondland, over Sondland’s cell phone, not on speaker, whether Ukrainian President Vlodymyr Zelensky was going to do an investigation, after Sondland informed the President, “Zelensky loves your ass, he’ll do anything you want him to.”

Holmes’ presentation as to how he could hear this exchange was singularly unconvincing, as was his explanation of why his all-important overhear was not presented until last week, after his boss, Ambassador William B. Taylor, Jr., had testified, but never referenced this conversation—despite Holmes’ having briefed him on it.

What is lost in this is the impact of this testimony in Ukraine, where President Zelensky is in a showdown with the neo-Nazis and nationalists over his efforts to negotiate a peace with Russia; where the IMF is demanding hugely unpopular austerity measures as a condition for further aid; and where various British imperial writers are predicting a new Maidan. Holmes’ recitation that Zelensky will do anything for the American President, hardly plays well with those out to prevent peace at all costs. That is deliberate; it is orchestrated to that end.

Attorney General William Barr has opened an investigation into possible criminal activities by the anti-Trump coup plotters, while Speaker of the House Nancy Pelosi, in a fit of semantic satiation, repeats the nonsense that Trump is an “imposter.”

On November 15, the Attorney General of the United States, William Barr, portrayed a United States in the midst of an insurrection that could destroy the country. He claimed, correctly, that the aim of this insurrection is to debase and forever weaken the American Presidency and turn this nation into something akin to a parliamentary system. In his writings on the Bill Clinton impeachment, Lyndon LaRouche cited exactly this intent. Attorney General Barr also noted that whole sections of the judiciary have ceased to function as anything other than a rubberstamp for RESIST policies.

The Speaker of the House, Nancy Pelosi, on Sunday’s talking head shows, repeated over and over again that the President of the United States is an “imposter” because Putin really steered all of Trump’s 63 million voters. In the meantime, nothing is happening in terms of rebuilding the nation’s infrastructure; creating the types of productive jobs that can sustain entire families at a healthy income; creating an educational system that cultivates and nurtures genius; fixing the broken healthcare system; or undertaking the crash mobilization for space exploration necessary to ensure the nation’s future.

Doing so is now urgent. It must be financed through a national banking system and a New Bretton Woods world credit system, and will use Glass-Steagall to ensure that citizens don’t pay for the insanity of Wall Street and the City of London. That is the answer to the ominous clouds of financial instability created by the unraveling of the newest worldwide bubble. That is LaRouche’s policy.

The only voice of sanity in last night’s Democratic debate was Tulsi Gabbard, going directly after Hillary Clinton and her Democratic Party’s policies of forever wars. As LaRouche had forecast, the Democrats have become like the Democratic Party of Athens, those who killed Socrates and are now out to obliterate any possibility of reason by wielding identity politics and the Green New Deal. They are the fascists Lyndon LaRouche so pointedly portrayed in “The New Left, Local Control, and Fascism,” published in 1968.

The field is wide open for the LaRouche movement. People are repulsed by the insurrection described by the Attorney General. Americans need a program and a method of thinking that can actually solve this mess. The long-anticipated Horowitz Report is now scheduled for release on December 9. Preceding it with a highly-effective intervention during this Congressional recess—an intervention designed to prevent impeachment from getting off the ground, while showcasing the LaRouchian economic recovery that the impeachment charade is designed to prevent—is the path to a real breakthrough for the Republic.