This editorial appears in the December 6, 2019 issue of Executive Intelligence Review.

What the Central BankersWon’t Tell You:The System is Disintegrating 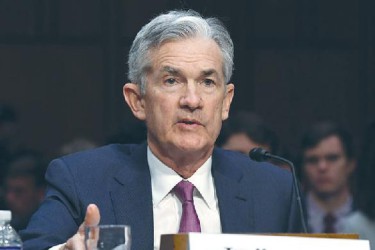 Federalreserve
Jerome Powell, Chairman of the Federal Reserve; and below, the trading floor of the New York Stock Exchange. 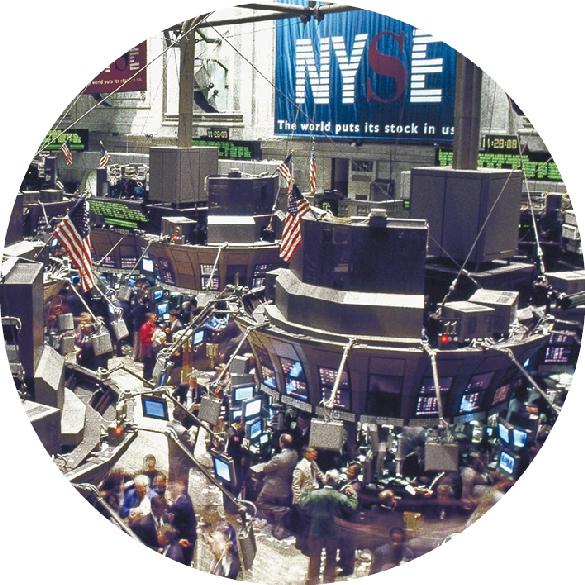 Nov. 29—On November 18, in the midst of hearings by the regime-change coup plotters aimed at removing President Trump, the President was meeting with his Treasury Secretary Steven Mnuchin and Federal Reserve Chair Jerome Powell. For such a meeting to occur is highly unusual. Trump summoned Powell to the meeting, from which little of note has been reported. He tweeted afterwards only that “Everything was discussed,” while Powell’s comments were couched in the usual opaque Fed-speak, that future policy will depend on “incoming information that bears on the outlook for the economy,” and the Fed will make policy “based solely on careful, objective and non-political analysis,” blah, blah, blah. . . .

Most of the media focus continues to be on whether there will be another interest-rate cut before the end of the year, whether rates will go up or down in 2020, and how much higher the stock market can go, after the Dow Jones average went above 28,000 early this week. Not surprisingly, there were no comments on the continuing commitment of the Federal Reserve to a massive bailout, in the form of overnight “repo” lending, which is now averaging approximately $70 billion a day. Since the Fed’s nightly injection of funds began on September 17, with 24-hour loans ranging from $25 billion to over $100 billion per day, the Fed has added 14-day loans, and now 42-day loans. Additionally, the Fed reversed its policy of tightening and selling off assets and is now purchasing $60 billion per month in mostly worthless assets from banks, which Powell denies is “Quantitative Easing 4.”

With the monetary spigots running full blast, pumping huge volumes of liquidity into a system which is supposedly healthy—according to Powell and most other central bankers—why the silence on the biggest bailout underway since the Crash of 2008?

In speaking of this, on November 26, Schiller Institute President Helga Zepp-LaRouche made the point that the key issue facing the world is that the crash of the trans-Atlantic financial system is about to happen. If you talk to informed people in the world of finance, they all agree that a major crash is upon us, and that it will be worse than 2008.

The repo crisis was precipitated when interbank lending froze, as banks preferred to hold onto their cash rather than loaning it. In repo lending, a lender takes an asset in return for cash, which it returns the next day for its cash back plus interest. When interest rates on this market spiked to 10% on September 17, J.P. Morgan Chase (JPMC), which had been a big player in this market, stopped lending. An initial explanation suggested that JPMC, which was flush with cash, decided to use that cash for stock buybacks, to push up its stock valuation, instead of using it for what had become highly profitable repo loans.

However, a November 26 post in Pam and Russ Martens’ influential Wall Street on Parade, under the title “Intra-Day Bankruptcy,” presents a different explanation, referring back to a Federal Reserve memo on the 2008 Lehman Brothers collapse, which warned of the systemic danger of a sudden bankruptcy filing. As to why J.P. Morgan Chase stopped making the repo loans, despite apparently having massive funds to draw on, Pam and Russ Martens wrote:

Why didn’t it make loans from those funds? There are two possible scenarios—neither of which is particularly reassuring. One scenario is that the bulk of J.P. Morgan Chase’s cash is already pledged as collateral for its own trades—for example, on the $55.7 trillion it holds in derivatives. Another scenario is that J.P. Morgan is once again afraid of a highly interconnected Wall Street firm making an intra-day bankruptcy filing and catching everybody by surprise.

Therefore, J.P. Morgan Chase pulled back, dumping a subsequent liquidity crisis into the lap of the Federal Reserve, in its role as “lender of last resort.”

Even with the Fed pumping in anywhere up to $100 billion per day to protect against an “intra-day bankruptcy,” in which a surprise announcement would leave lenders stuck holding the worthless assets of its customers—as happened with Lehman Brothers in September 2008—it is not enough. A report issued by Bank of America Merrill Lynch, as reported in the Financial Times, explains why.

According to the Financial Times article, “Beware the Dawn of the Corporate Dead,” “Bank of America Merrill Lynch estimates that there are 548 large or mid-range “zombie companies” in the trans-Atlantic region that need daily infusions of cash to avoid bankruptcy. A zombie company is one whose annual earnings cannot cover the interest on its debt. Corporate debt is one of the explosive trigger points in an increasingly stretched financial system, as it is estimated that more than 40% of new bonds issued by corporations are traded at or near junk bond levels. 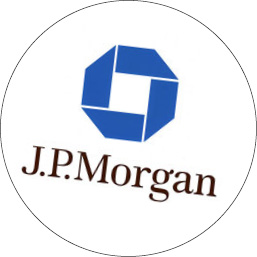 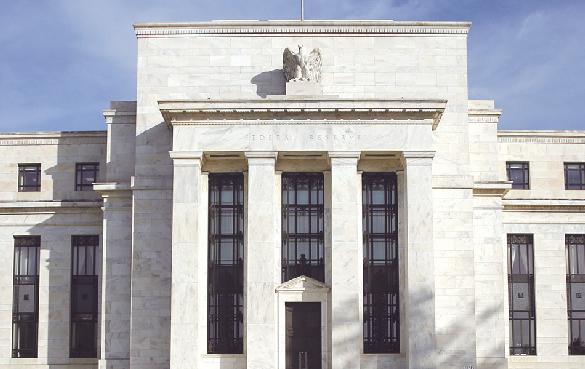 This is a Systemic Crisis

As Lyndon LaRouche repeatedly emphasized, prior to his passing earlier this year, what we are seeing today is not merely a “system-wide” crisis, but a terminal systemic crisis—a disintegration of the entire British imperial monetarist system, under the weight of hundreds of trillions of dollars of speculative debt, combined with a failure to maintain necessary investments into the physical economy. See Lyndon LaRouche’s “Typical Collapse Function.” Since 2008, driven by the policies of the City of London, the deregulated banking/financial system has created a buildup of unsustainable levels of debt in all areas—corporate debt, government debt, household/consumer debt—which forces investors to seek ever-higher returns, meaning they turn to ever-more-risky investments, to make enough profit to cover their debts. In this process, everything becomes “securitized,” creating new instruments for speculation. This speculative frenzy is now hegemonic.

As with Mortgage-Backed Securities in the lead-up to the 2008 Crash, so-called “innovative financial instruments” are launched, with little or nothing of value to back them up, and no way of knowing their real value, except what frenzied traders will pay. One of these is Collateralized Loan Obligations (CLOs), which are securities produced from bundling leveraged corporate loans—including loans to zombie companies!

A report in the Italian financial daily Il Sole 24 Ore, and a follow-up in Bloomberg, identifies a Japanese bank, Norinchukin Bank, which has been heavily involved in CLOs, as one of the other possible causes of the current liquidity crunch. Norinchukin became a major player in high-risk CLO trading to make up for losses due to the effects of the negative interest rate policy of the Bank of Japan. It currently holds almost 10% of the global CLO market.

When the Bank of Japan warned that prices of CLOs might fall due to changes in market conditions, the bank began selling off its holdings, taking away from the usual flows of money from CLO trading into overnight lending. In its Nov. 12 coverage of the issue, “Japan’s biggest CLO Investor Cools on $750 Billion Market,” Bloomberg concludes that, “At the start of the year, Norinchukin’s CLO purchases were critical in both the U.S. and Europe after the leveraged-loan market seized up,” thus affecting the repo market liquidity.

This is not a problem located in Japan: Norinchukin Bank’s counterparties include major French banks BNP Paribas, Société Générale, Crédit Agricole and BPCE.

Of note, also, are the comments of former IMF Director Carlo Cottarelli, who joined the chorus of those supporting more liquidity pumping in the European Union. In a November 17 radio interview he said:

The European Resolution Fund [ERF], which is being created, is small and is growing slowly. What they say is: As long as the ERF has not reached a dimension big enough to bail out banks—all banks—we need the possibility for the European Stability Mechanism to jump in with its money to avoid insufficient funds to support the European banking system.

This may explain the about-face of the Angela Merkel government in Germany in joining the call for a centrally run ERF, as there are increasing fears of a crash of Deutsche Bank in this moment of escalating instability.

The U.S. Economy Is Not Strong!

The hope that the “continuing strength” of the U.S. economy can pull the world out of a deepening “recession” is proven to be a delusion by new monthly figures that show a slowdown in manufacturing, trade, transport of goods, and consumer spending in the U.S. While many phony reasons are proffered—trade war with China, the uncertainty surrounding the impeachment of Trump, climate change (!)—the reality is that the debt crisis reveals the depth of the collapse of the physical economy of the U.S. The four-decade-plus shift of the United States from a scientifically and technologically driven economy, with constant improvements in productivity, to a post-industrial rust heap, in which the only “wealth” produced comes from changes in fictitious “market” valuations produced by speculative trading, is now hitting the American people with a vengeance.

This is revealed in a new report, “Births: Final Data for 2018,” released on November 26 by the Centers for Disease Control (CDC). The CDC report provides statistical evidence of a demographic collapse underway, similar to that which occurred in the former Warsaw Pact states due to the imposition by the IMF and western governments of “shock therapy” after the fall of the Soviet Union.

The data show a decline in the birth rate by 2% for 2018 compared to 2017; the decline of the fertility rate (number of children per woman), which is now 1.729—the “replacement rate” is 2.1 children—and the decline in life expectancy. This last point is related to increased deaths from preventable diseases, especially in the “Rust Belt,” the formerly industrialized regions of the country, and correlates with a ten-fold increase in deaths due to drug overdoses, from 2.3 per 100,000 in 1999, to 23.5 per 100,000 in 2017.

These are all symptoms of an economy spiraling downward, due to a continuing devolution of its ability to produce new physical capacity, an economy in which real productivity is declining and the means to support the population are evaporating. It is time for President Trump to fulfill his economic promises during the 2016 election campaign, beginning with breaking up the Wall Street banks, by restoring Glass-Steagall banking separation, and by reaching agreements with Russia, China, and India for creating a new financial system, which would allow for the abundant issuance of productive credit. Towards this end, the President will profit by turning to the outline provided by Lyndon LaRouche in his Four Economic Laws and his call for a new Four Power Agreement for a New Bretton Woods monetary system.

It is clear that the nearly three years of Russiagate, Ukrainegate and assaults on the Presidency by neoliberals and neoconservatives alike has been designed to prevent him from carrying out such a program. Given the fragility of the trans-Atlantic economy, these reforms cannot be put off until after the 2020 election; they must be implemented now.