This editorial appears in the January 8, 2021 issue of Executive Intelligence Review. 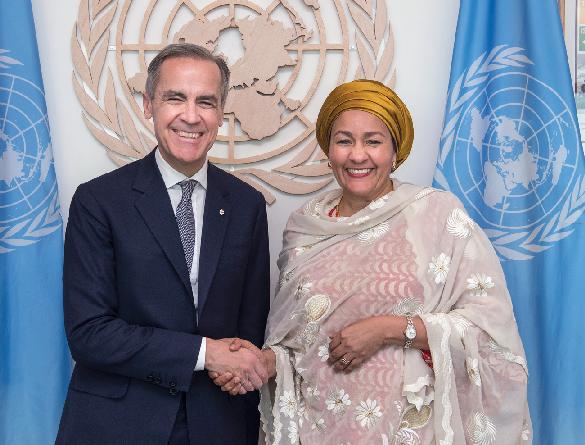 Jan. 1—The world’s central bankers, guided by the former head of the Bank of England, Mark Carney, have activated their genocidal plan to use the power of the central banks and the associated “too big to fail” mega-banks to take over economic policy making from elected governments, cutting off credit to any business which produces what they consider to be too large a “carbon footprint.” The fact that carbon has nothing to do with climate is known to every competent scientist in the world—those who rely on creative mentation, rather than computer projections.

The British Imperial plan is not about climate; this is nothing but the latest manufactured excuse for committing genocide. Once it was eugenics—that the “inferior races” in Africa and India simply didn’t understand the “moral necessity” of carrying out contracts to export their food, simply because millions of Indians and Africans were starving to death. (See Matthew Ogden’s article in this issue of EIR, on how the forced famines in India helped convince America’s Founding Fathers to revolt against the British Empire.)

Then it was the “natural law” of the “right to private property.” (See Fred Haight’s article in this issue of EIR on John Locke’s “constitution” for his slave colony of Carolina, defining the right to own people as God’s natural law. This genocidal view was kept out of the U.S. Constitution, which instead asserted Leibniz’s “right to pursue happiness.”) 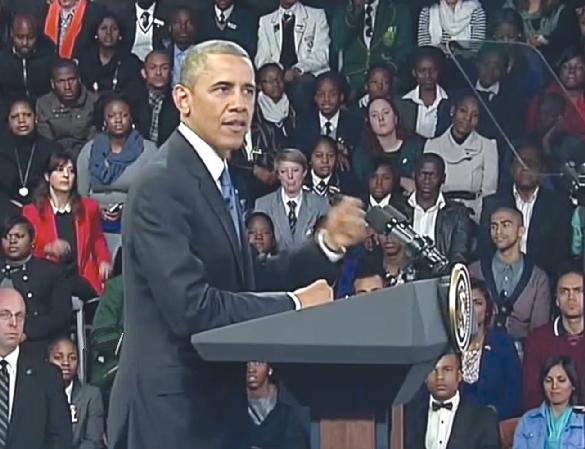 White House
President Barack Obama led the way to today’s green fascism, by promoting low energy-density solar and wind power, that will lead to mass population reduction. Here, he peddles that genocidal policy to a Young African Leaders Initiative Town Hall at the University of Johannesburg’s Soweto campus on June 29, 2013.

Now it is the scientific fraud known as “anthropogenic climate change” created by carbon—carbon compounds generated by machines, by farm animals, and by human beings. No matter that carbon dioxide is the food for plant life—it must be eliminated, and the people and the animals along with it. As an ideology, this evil movement has been denounced, and countered with real science, for decades by the LaRouche movement. But now it is no longer an ideological issue. It is a Malthusian scheme to carry out Prince Charles’s proposed reduction of the human population to about one billion people—which the British Lords and Ladies describe as the maximum “carrying capacity” of our Earth. Recall that Bertrand Russell once said: “If a black death could be spread throughout the world once in every generation, survivors could procreate freely without making the world too full.” And it was Barack Obama who told the young Africans at a university in Soweto that they must not aspire to having big houses, air conditioning and cars, lest the world “boil over.” To make clear that he had no intention to actually solve the energy problem, Obama told supporters in the U.S. that “we wouldn’t need to invent some fancy new fusion energy or anything,” instead peddling “insulation of homes” and returning to primitive, low-energy flux density solar and wind, which could not sustain a human population more than a few billion.

It is obvious to any thinking human being, that the current pandemic and the famine it has engendered—today’s “black death”—could have been prevented had the Western nations not intentionally taken down their health care systems as part of the “privatization” process—short-term profit over human lives—while also denying access to functioning health care systems for the poorer nations.

Resolving this crisis requires the cooperation of the world’s leading economies and scientific institutions, especially those of the U.S., China, and Russia. Consider this in trying to understand the thinking behind the demonization of Russia and China. Are the proponents of this new McCarthyism in the UK and the U.S. unaware that this division of the world into competing, geopolitical blocs is causing millions of deaths—or is this their intent?

President Trump was elected because he rejected this Cold War relic, insisting that “it is a good thing, not a bad thing” to be friends with Russia and with China. He was maneuvered into backing off from that noble commitment by the Russiagate coup plotters and the spokesmen for the military-industrial complex, who maneuvered themselves into his Cabinet.

It is not too late for Trump to act. Were he to call a summit of Presidents Putin, Xi, and himself, to address all aspects of the global crisis, the controlled environment could be broken. Pardoning Julian Assange and Edward Snowden would be a useful first step.

The LaRouche Organization, TLO, was founded just before Christmas, to address all these aspects of the global crisis. Together with the Schiller Institute, TLO is pulling together those people of good will around the world who otherwise would be isolated. This is a crisis of civilization, not of each individual nation. Make this the opportunity to implement a new paradigm for mankind. Think, then act.