This editorial appears in the June 10, 2022 issue of Executive Intelligence Review.

The mystic chords of memory … will yet swell the chorus of the Union, when again touched, as surely they will be, by the better angels of our nature. 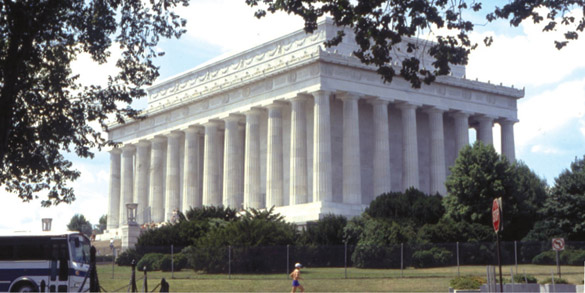 May 30—This Memorial Day weekend in the United States begins the celebration of the 100th anniversary of the May 30, 1922 dedication of the Lincoln Memorial, designed by American architect Henry Bacon, with the Lincoln statue sculpted by American artist Daniel Chester French in 1920 and finished two years later in 1922—also the year of the birth of Lyndon H. LaRouche. Eight million people from around the world visit this site each year, in pursuit, not merely of the spirit of the personality of Lincoln depicted, but of the truth behind the mission for which Lincoln dedicated his life and thereby unified his nation.

Memorial Day 2022 in the United States should not be captured by the alternately horrific and bizarre apparent characteristics of the present historical moment. Rather than allow either the last two weeks of monstrous mass killings in Uvalde, Texas and Buffalo, New York, or the disgusting drama of a United States supplying $40 billion worth of weaponry to a Nazi-dominated Ukrainian quasi-military in pursuit of a fruitless bloodbath in Ukraine, to preoccupy our, or the world’s attention, we propose an alternative. The actual story of Memorial Day, sometimes also called Decoration Day, may allow us a certain insight into how to use great historical and moral precedents—“the better angels of America’s historical nature”—to now, in this moment, do better, more noble things.

Charleston, South Carolina was the location in which the first Memorial Day was held, on May 1, 1865. That occasion was organized by a combination of 10,000 African-American Union soldiers, newly freed slaves, and the white Quaker and other missionaries who had come recently to the South Carolina area starting in approximately 1862. They had exhumed bodies of 260 Union troops who had been horribly mistreated by Confederate soldiers.

The bodies were not only exhumed and re-buried with full honor; they were decorated with flowers and ribbons, but also with poetry, song, and the tears of those who performed in the honor of those fallen soldiers.

More recently, seven years ago, Charleston, South Carolina was the location of a mass execution of nine members of Mother Emanuel AME Church. This church, the staging area for some of the most important events in American history, tragic and heroic, was the scene of carnage, racially motivated carnage, including the assassination of an elected official, a state senator. But, to many, even more shocking than the killings, was the response of the church’s congregation toward the shooter: compassion and forgiveness. They insisted on the practice of Christian mercy, under precisely the circumstances where faith would be most tested.

This was something many found downright appalling, as well as incomprehensible—which happens to be their actual view of Christianity as well. They would have had to understand the revolutionary Christian tradition of the centuries-old African-American church, as that tradition had played a central role in establishing the first Memorial Day, and the words of Lincoln’s Second Inaugural Address—“With malice toward none, with charity for all”—as an action that the Church put into practice before all the world.

Against mass murder, the congregants were employing the most important weapon in their arsenal—the reassertion of their own humanity in the face of the most brutal denial of it. Friedrich Schiller refers to this as the action of the sublime.

Lincoln’s words from his first inaugural address, cited above, as well as his two political poems that adorn the interior of the Lincoln Memorial—the Gettysburg address and his second inaugural address—call Americans to something higher than the tasks to which their day-to-day lives would seem to prepare them. They call on citizens to act on behalf of the sublime.

To confront the great, life-and-death issues of our time, a corresponding depth and profundity of thought must be sought, found, and shared with citizens in a public discourse. That, on a more fundamental level, is what attracts people, Americans and non-Americans, to the Lincoln Memorial. America’s still-ambivalent embrace of the higher calling to which Lincoln, Martin Luther King, and President John Kennedy wished to commit it, reveals why Lincoln’s personality seems to be at once elusive and omnipresent in our national consciousness. “The awful shadow of some unseen Power floats, though unseen, among us.” These opening lines from Shelley‘s “Hymn to Intellectual Beauty” capture the truth of Lincoln’s effect, as well as his life’s purpose. Think of the Lincoln Memorial, and all of the people who have spoken or sung there. It is America’s “amphitheater of Epidaurus,” the preferred stage upon which American history has been dramatized and renewed for 100 years. Some day in the not-too-distant future, it may host another great transformation which we, and those who join us, will join us in celebrating: the exoneration of Lyndon LaRouche.

For an historical presentation on the design and construction the Lincoln Memorial and the statue of Lincoln with it, see the article, “Beautiful City,” in EIR, July 14, 2017, beginning with the subsection “New York and the Creation of the Lincoln Memorial,” pages 11-15.