This article appears in the October 26, 2018 issue of Executive Intelligence Review. 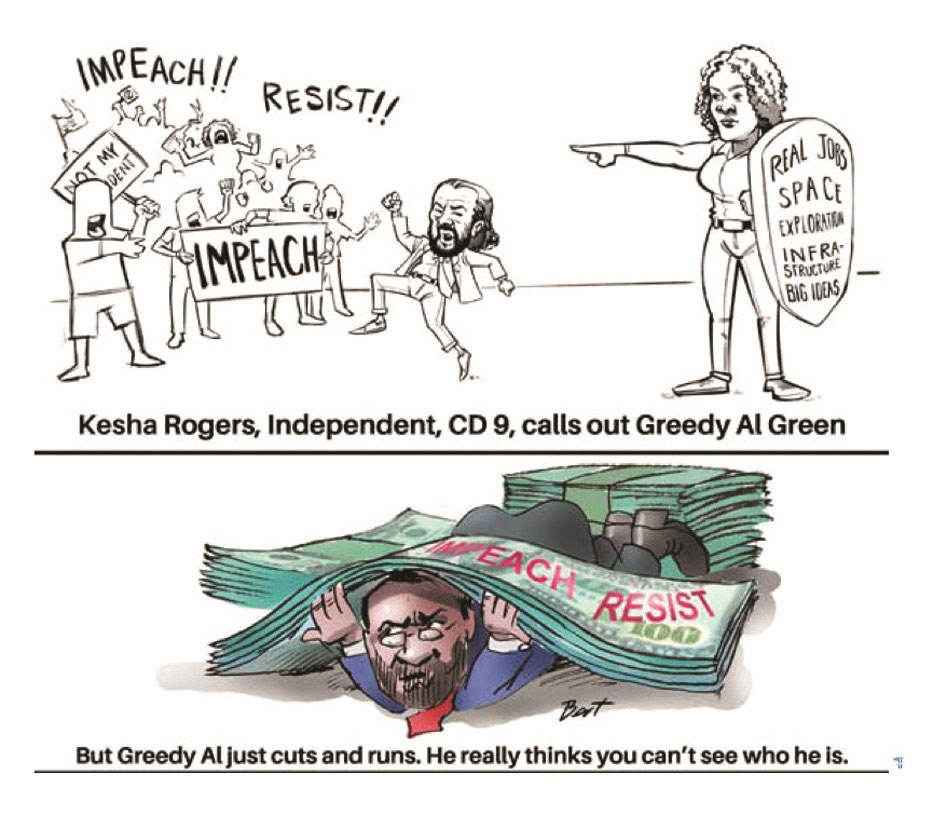 Oct. 23—In an interview today, less than two weeks before the November 6 Midterm elections, independent candidate Kesha Rogers stressed that her campaign is finding an absolute thirst for big ideas and the types of crash-program problem solving that is characteristic of the space program. Rogers, who is spearheading the LaRouche PAC’s Campaign to Secure the Future’s intervention into the Midterms, is running as an independent in Texas’ 9th C.D. against incumbent Democrat Al Green.

Green positioned himself to lead the insane impeachment drive for the Democrats against Donald Trump in grandstanding Congressional speeches in 2017 and early 2018. In those speeches, Green proclaimed, contrary to the explicit words of the Constitution, that impeachment was a matter of partisan whim, that the Constitution did not require that the President commit any crime to be impeached. As a result, Green received a flood of donations from Democratic organizations nationally, while doing virtually nothing for his district, which is one of the poorest districts in Texas.

The 9th C.D. was gerrymandered by former House Speaker Tom Delay to dump significant minority populations into one district, in order to protect Republican majorities in other districts in the Houston metropolitan area. Some say the district was even deliberately created for Al Green in 2004, in order to specifically ensure his Democratic seat in Congress.

“I chose this District as a challenge,” Rogers said, “because even in its creation it exemplifies exactly the type of partisan and identity politics which have failed us and turned statecraft into a small-minded spectator sport, resulting in whole sections of our population being stuck in place, going nowhere, or far worse. Al Green presides over this district like an entitled slum lord, doling out small favors and small programs to make abject poverty somehow more comfortable.

“By contrast, I embrace the ideas of Martin Luther King, Bobby Kennedy, and Lyndon LaRouche: Poverty is not a natural human condition. It is evil. It is something to be completely broken and conquered.

“The first pledge of LaRouche PAC’s Campaign to Secure the Future is to end the British-inspired coup against Donald Trump and the threat of impeachment. That will continue if the Democrats have a resounding victory in House races. If it continues, then we face a period of absolute chaos right at a time when the financial system, built on a new monstrous monetary bubble, faces a new and more threatening collapse than that we suffered in 2008. 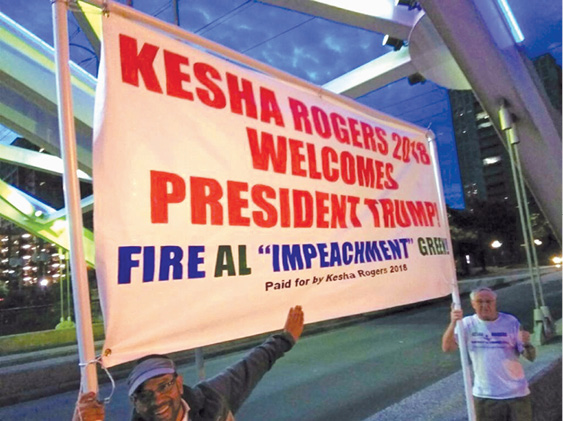 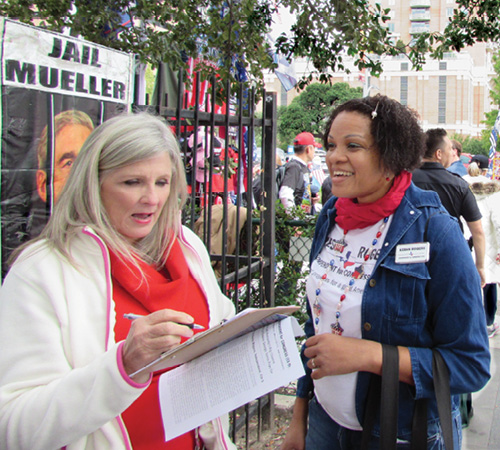 “All along, the impeachment drive against Trump has been for one purpose: Get him to give up his big ideas about supporting Glass-Steagall and the American System of political economy, and his intent to have sane relationships with Russia and China. Get him to depend so much on the extant corrupt party machinery that either he loses popular support and can be impeached or, in order to pragmatically survive politically, he returns to the failed programs of George Bush and Barack Obama, which have practically destroyed this nation.

“At the Trump-Ted Cruz rally last night, we had a big response to LaRouche PAC’s leaflet, ‘The 2018 Midterms Are Humanity’s Big Chance: Don’t Blow It on a Bunch of Crazies Paid for by George Soros.’ People were both surprised and intrigued to think about the actual stakes here, including war and peace, rather than remaining in the fox hole thinking which they are fed by the media every day.”

On Oct. 22, President Trump held a huge rally in Houston with 32,000 people, close to 100,000 people had tried to attend. The Rogers campaign was there in force, emphasizing that support for the President had to now bear fruit in the fulfillment of his campaign promises concerning Glass-Steagall banking separation, and the American system of political economy which, by its nature, could generate massive amounts of credit for renewing and modernizing major national economic infrastructure.

These promises not only need to be implemented, but expanded to fulfill the other conditions for economic prosperity specified in Lyndon LaRouche’s Four Laws for Economic Recovery. “With credit directed toward projects with a mandate to increase the productive powers of labor and living standards, we now need a crash program for fusion power development which can transform raw materials into new resources and power space exploration. Space exploration, in turn, is the next big human frontier, and a crash program for Moon-Mars exploration presents an opportunity for collaboration among the United States, Russia, China, and India to solve basic scientific problems for all of mankind, while providing the foundation for a durable world peace,” Rogers said. 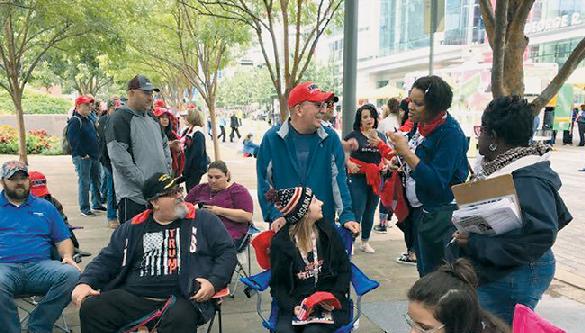 The Rogers campaign is now running radio ads on Houston’s major gospel station and will expand this week to running an ad campaign on the major Spanish station. These ads contrast Al Green’s Johnny-One-Note cash plea about impeachment with Kesha Rogers’ bold vision for the future of the district; at the same time the ads hit pressing economics concerns highlighted by emphasis on restoring Glass-Steagall; the need for massive infrastructure building, including long-delayed flood control systems for Houston in the wake of Hurricane Harvey; solving the immigration crisis by ending free trade and developing Mexico and Central America; and returning NASA to a greatly expanded and active manned space exploration mission. More ads and videos are being produced this week.

A major theme of Rogers’ campaign has been the need for a return to a classical curriculum and classical education. Her central and repeated idea is that every child’s genius is fostered and developed under such a program. She cites an example of such genius, the case of Katherine Johnson, who not only calculated how John Glenn could orbit the Earth and return to earth safely, how Apollo astronauts could return to their capsule from the Moon, but who also broke down every racial barrier with her passionate determination and genius.

On Oct. 25, the Rogers campaign is holding an event to debunk the recent climate change report by the Intergovernmental Panel on Climate Change (IPCC), which Rogers’ called an “undisguised attempt to impose population control, zero growth, and genocide on large parts of this planet.” On Oct. 27, her campaign is sponsoring a classical music concert called, “The Sweet Power of Music to Unify and Uplift the Nation.” 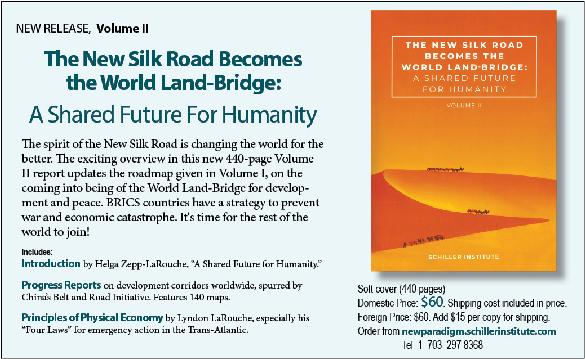