This article appears in the May 13, 2022 issue of Executive Intelligence Review.

“Science is one of the most powerful vectors for bringing people together, and therefore for peace.” 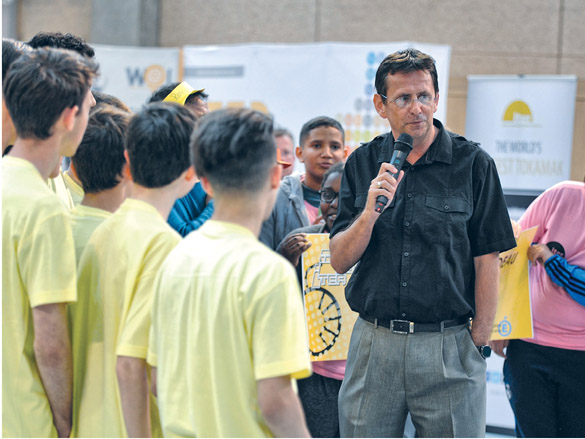 Scientific cooperation between France and China in the field of civil nuclear energy is relatively old. Physicist Alain Bécoulet has been at the center of it for 30 years. He is the former director of the French Atomic Energy Commission’s (CEA) Institute for Research on Fusion by Magnetic Confinement (IRFM) and currently the head of the Engineering Domain of the International Thermonuclear Experimental Reactor (ITER), a giant tokamak being assembled at Cadarache near Aix-en-Provence, France. Prior to the big ITER project, Bécoulet worked on various tokamaks, including the JET (Joint European Torus in Culham, UK), DIII-D (National Fusion Facility in San Diego, California) and finally Tore Supra (Cadarache, France). He was interviewed by Karel Vereycken, publication director of the French monthly Nouvelle Solidarité.

Karel Vereycken: Mr. Bécoulet, good morning! On March 28, during a press conference in Paris … the Chinese government, through its ambassador, Lu Shaye, awarded its International Scientific and Technological Cooperation Award to two French researchers at the heart of Franco-Chinese cooperation: Professor Jacques Caen, a renowned hematologist; and yourself, for your work on thermonuclear fusion in the context of the ITER project.

Today, many governments, faced with the rising cost of fossil and renewable energies, climate, conflicts, and population growth, are suddenly becoming aware of the importance of energy. Can you briefly remind us what fusion is all about and how it could provide an answer to these challenges?

Alain Bécoulet: The fusion of light atomic nuclei is the mechanism that prevails in the functioning of our Sun, and of stars in general. It is a very safe, clean, low-carbon and very abundant source of nuclear energy. If we manage to master it, it would naturally become the dominant component of our future “energy mixes.” The challenge is to domesticate it on Earth, which with ITER, is only now entering its feasibility demonstration on “Scale 1.” Once ITER has reached this stage in the second half of the 2030s, the way will be open to power reactors based on the principle of fusion.

Vereycken: Since you were part of the adventure, what innovations have there been between the first tokamaks and those of today? Have advances in superconductivity contributed to these advances? What is the objective of the giant ITER tokamak compared to its predecessors? 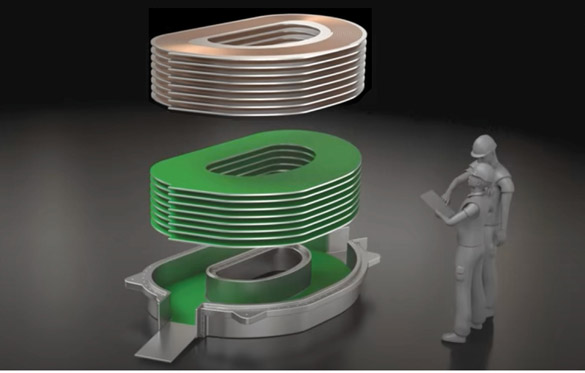 Bécoulet: The challenge lies in triggering and then maintaining fusion reactions in a “reactor” of reasonable [large] size; i.e., in the extreme miniaturization of a Sun. To achieve this, it has taken, and still takes, several decades not only of physics and experimentation on “tokamaks” (the name given to this type of reactor) of various shapes and sizes, but also of numerous technological developments and innovations. You mention superconductivity: it has indeed enabled us to make a considerable leap forward in the realization of the continuous magnets necessary for the confinement of the extremely hot medium (about 100 million degrees Celsius) in which the fusion reactions take place.

The size of the tokamak is then directly linked to the power that can be extracted from this type of reactor, with a threshold effect below which reactions cannot be triggered. ITER, with its 830 cubic meters of “plasma” (the state in which the mixture of reactants is brought to such temperatures) will allow us to produce about 500 megawatts of fusion power.

Vereycken: A bit like the space missions, ITER (the cooperative international construction of which was one of the objectives set in summit meetings of Russian and American Presidents Gorbachev and Reagan) has brought together countries that were not necessarily friends, in a common project. Is the complete sharing of information and intellectual property a fundamental element of this win-win cooperation? 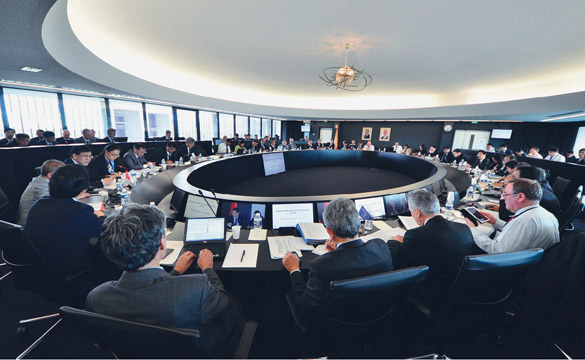 Bécoulet: ITER is indeed being built by the International Organization, following a treaty signed at the end of 2006 by seven partners: China, South Korea, the United States, India, Japan, Russia, and the European Union. The European Union is the host member, hosting the construction site in Cadarache, in the south of France. The ITER Treaty provides for full sharing of intellectual property developed during the construction and experimental operation of ITER among all Members.

Vereycken: What are the benefits for the French economy?

Bécoulet: ITER is being built in France and it is clear that the economic benefits are very important for the country (construction and transport contracts, accommodation for personnel and their families, etc.). To date (we are still about five years away from the end of the assembly of the tokamak), it is estimated that these benefits are worth more than 4 billion euros.

Vereycken: Doesn’t the policy of sanctions and embargoes risk harming a science whose progress, in the final analysis, benefits everyone? Will the 10 million parts needed for the assembly of ITER be available?

Bécoulet: Generally speaking, ITER is [being] built by assembling millions of parts manufactured and supplied “in kind” by its members. Trade between countries is therefore central to maintaining the construction schedule. The Council of ITER has been severely disrupted for the past two years by the effects of the Covid-19 pandemic, which has not only disrupted industrial production around the world, but has also slowed and complicated transportation considerably.

Any political difficulties between the ITER members are also likely to disrupt the development of fusion. The current tense situation between Russia and the other countries is one of them.

However, it should be remembered that ITER is not an international “collaboration,” but an international treaty. To date, this treaty has not been questioned by its members and the impact is essentially linked to the great complication of international exchanges, on which ITER is indeed heavily dependent. 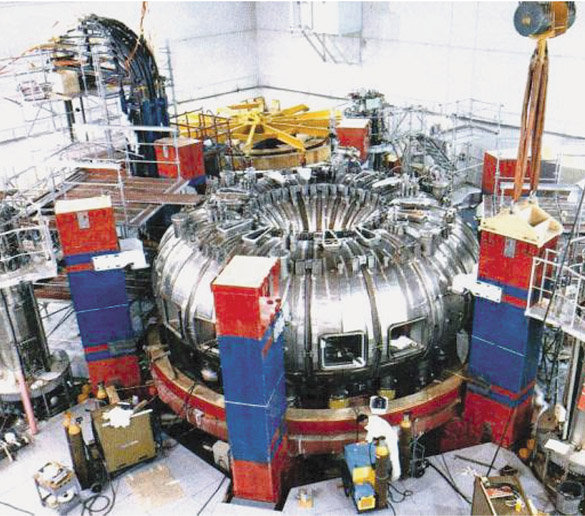 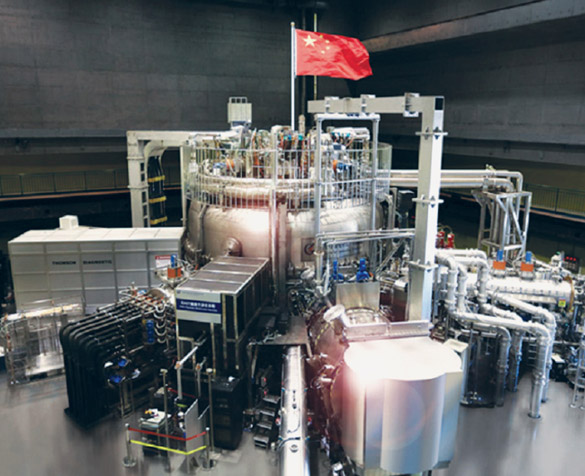 Vereycken: How does China contribute to ITER?

Bécoulet: China is one of the signatories of the ITER Treaty and as such contributes to the project through in-kind supplies and its contribution to the budget of the International Organization. At the same time, it has an ambitious and dynamic national research and development program which, like several other members, plans to draw all the lessons from ITER in the design and construction of future reactors.

Vereycken: Didn’t France, and in particular EDF [Électricité de France S.A., a French multinational electric utility company, largely owned by the French state—ed.], contribute to the development of civil nuclear power in this country from the start? How has Franco-Chinese cooperation in this field evolved? How has mutual trust been created in such a sensitive area?

Bécoulet: Franco-Chinese cooperation in the field of fusion is already more than thirty years old, and I am particularly proud to have made an active contribution to it very early on. At this stage, it has been driven by the major research institutes, the CEA on the one hand and the Chinese Academy of Sciences on the other. The CNNC (Chinese National Nuclear Company) joined about 20 years ago, via its SWIP institute [China Southwestern Institute of Physics—ed.]. The major nuclear industrialists are beginning to join fusion essentially since the ITER stage.

Vereycken: What role have you played in these exchanges?

Bécoulet: I have personally contributed to the rapprochement between China and France in fusion for more than thirty years. My first contributions were obviously purely scientific and linked to my own research activities, including numerous exchanges in both directions. This role has progressively developed and amplified as my responsibilities at the CEA and within the European fusion program have grown (via joint research programs, equipment exchanges, joint projects, etc.), culminating in the mid-2010s with the creation of SIFFER, the Sino-French Fusion Energy Center, a virtual laboratory joining the fusion forces of the CEA, the Chinese Academy of Sciences, and the CNNC, with a view to accelerating the exchanges and collaboration between the two countries. Significant investments have been made in the tokamaks of both countries in technological fields such as plasma components, inspection robotics, diagnostics, etc.

Vereycken: Tell us about the history of Tore Supra (now WEST), the EAST project, and the latest breakthroughs achieved in China. 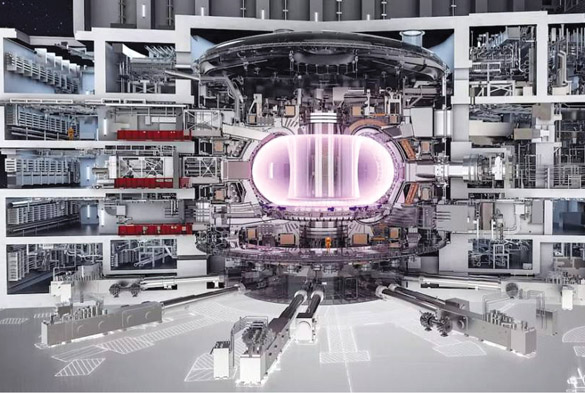 ITER
ITER’s central solenoid, the world’s largest, most powerful magnet, is shown standing vertically in the center of this cutaway illustration.

Bécoulet: Tore Supra was the first tokamak, in the 1980s, to demonstrate the possibility of using superconducting magnet technology for fusion. It thus really opened the technological path to ITER. Tore Supra then systematically continued to develop the other key technologies for maintaining fusion conditions in a tokamak (continuous power injection, continuous heat removal, real-time control, etc.) with real successes and world records, including plasmas maintained for more than six minutes at very high injected power in the early 2000s.

China wanted to follow the same research path very early on, probably thanks to the excellent collaboration that we already had in place. It designed and built the EAST [Experimental Advanced Superconducting Tokamak in Hefei, China—ed.], based on concepts very similar to those of Tore Supra, and numerous exchanges allowed the rapid emergence of EAST. When it came to developing the plasma component technologies of Tore Supra (mid-2010s), in support of the ITER program, China gave CEA a great deal of support, and I wanted to emphasize this growing “twinning” between the two tokamaks by renaming Tore Supra to WEST, combining a geographical nod with the fact that Tore Supra was using a technology based on tungsten, whose chemical symbol is W.

Vereycken: What needs to be done to encourage new vocations in France? How is it going in China? 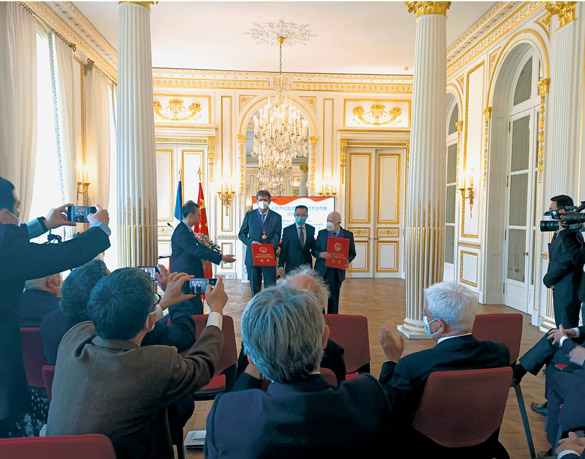 Nouvelle Solidarité/Karel Vereycken
A press conference in which the Chinese Ambassador presented the China International Scientific and Technological Cooperation Award to two French researchers, Jacques Caen and Alain Bécoulet, for their work on thermonuclear fusion. Chinese Embassy in Paris, March 28, 2022.

Bécoulet: Research in general needs the best talents. So it develops on a breeding ground of vocations. In the case of fusion, the challenge is one of the most important that humanity has ever tackled. The road ahead is still quite long and requires strong support from governments, but also, increasingly, from energy players in the broad sense of the term, and from private investors. We are currently seeing a growing interest on this side. It is likely to support these vocations. This is true in the West, but also in China.

Vereycken: Your book, L’énergie de fusion, published in French in 2019 by Odile Jacob and already translated into English and Dutch, will soon be released in Chinese. Is this a good sign?

Bécoulet: This book aims to make as many people as possible aware of fusion research, by “telling” in simple words what scientific and technical advances have already been made and what challenges remain to be met, up [until] the reactor. I hope that it will inspire new vocations, and I am very pleased with the feedback I have received from readers and publishers.

Vereycken: How do you react to the award you received from China?

Bécoulet: As I said in my speech, beyond the immense honor that the Chinese government is giving me by awarding me this more-than-prestigious prize, it is fusion research and its totally open and collaborative character that are being distinguished. My deepest professional conviction is that science is one of the most powerful vectors for bringing people together, and therefore for peace. The will to know, to know, to decode Nature, is an inexhaustible and universal source of the human being. I am particularly proud to contribute to this and very grateful that it has been recognized and welcomed by the Chinese government through this prize. It also crowns the beautiful encounters and friendships that have developed over the years, and the renewed pleasure of my visits to China each time.