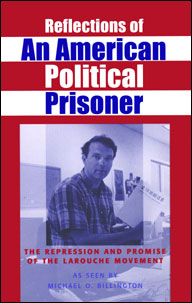 Nov. 7, 2000 (EIRNS)--"Does it shock you to think that America has political prisoners?... It's time you met Mike Billington." With these provocative words prominently featured on the back cover, Executive Intelligence Review today released the first run of Reflections of An American Political Prisoner: The Represssion and Promise of the LaRouche Movement, as seen by Michael O. Billington. Billington, the last of the LaRouche political prisoners to be released on parole, after ten years in jail--two years in Federal prison, and an additional eight years as a inmate of the Virginia Correctional system (his sentence in Virginia was 77 years!), has written a personal account of his political, philosophical, and moral development over nearly 35 years, including his work in the Peace Corps in the late 1960s. Most of the book is dedicated to his life and work, over the period since he became, in 1972, an activist in the political movement of Lyndon LaRouche.

Billington's story is already well-known to many around the world, who have been shocked to learn that here, in America, the "land of liberty," there could be political prisoners, given longer-than-life sentences, though innocent of any crime. Truly, this is a story that must be told to everyone who is committed to justice and truth.

This 430-page paperback may be ordered in electronic or print form at the LaRouche Publications Store.