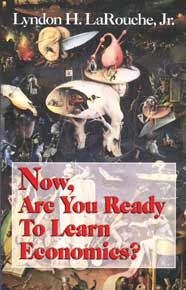 Nov. 7, 2000 (EIRNS)--Executive Intelligence Review released a new book of economic writings by leading economist and statesman Lyndon H. LaRouche, Jr. today. The 250 page book, entitled Now, Are You Ready to Learn Economics? is a direct polemical follow-up to LaRouche's 1984 economics text, So, You Wish to Learn All About Economics? As the back cover points out, it's obvious that Americans didn't want to learn over the past 16 years. Now that the world financial system and economy are disintegrating, the AIDS pandemic is striking Black Death proportions, and wars are spreading, perhaps people are ready to master LaRouche's method.

The book contains four recent writings by LaRouche, all of which have direct application to what nations and peoples must do after the crash of the financial system. They are:

In addition, the book contains a 24-page section of charts, demonstrating the collapse of the physical economy, as well as an appendix on the Ad Hoc Committee for LaRouche's New Bretton Woods, with a sampling of prominent international signators.