PURCHASE THIS BOOK AT THE ONLINE STORE 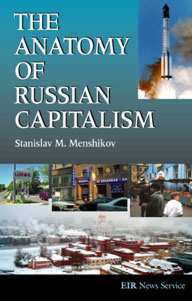 March 23, 2007—EIR News Service announced the publication of The Anatomy of Russian Capitalism, by Professor Stanislav M. Menshikov. Translated from the Russian by Rachel Douglas, the book is an authoritative study of the Russian economy during the first 15 years after the break-up of the Soviet Union. The Preface, by EIR founder and contributing editor Lyndon LaRouche, titled, "Russia's Next Step," poses the need for U.S. policy-makers to study and grasp the "disease" presented in this book, since it represents "an economic global pandemic which we must all join to defeat."

Professor Menshikov, author of in-depth studies of the international and Russian economies, became famous as one of the Soviet Union's top experts on the United States. In The Anatomy of Russian Capitalism, he turns his attention to Russia in the post-Soviet period. Here is the story of the new Russian oligarchs: who they are, and how they amassed their fabulous fortunes during the chaotic 1990s. Does the emerging Kremlin financial industrial group of President Vladimir Putin's second term represent a shift? The author believes that the Russian economy has fallen into a trap, from which the only escape route leads through a fundamental break with the oligarchical system.

Comments printed on the book's back cover testify to the stature of its author. "Stanislav Menshikov has been our most astute observer of the Russian economy for many years," says Prof. James Galbraith of the University of Texas at Austin. "He saw that communism needed reform a generation ago, when it might have worked. He recognized the reforms after communism for the disaster they were. Now he gives a comprehensive account of the state of capitalism in today's Russia."

The Scottish economist Angus Maddison, who teaches at the Universities of Groningen (The Netherlands) and Brisbane (Australia), points out, "The Anatomy of Russian Capitalism is the latest of many books by Stanislav Menshikov, and the fifth to be translated into English. He is the most cosmopolitan of Russian economists, with an insider view of the old style command economy and the problems of transition. He has a comparative perspective gained by nearly fifty years scrutinizing the performance of Western capitalist economies."

LaRouche, in his Preface, which is published in full in this issue of EIR, urges Americans to pay attention to this book: "It is time to learn the lessons of Professor Menshikov's account, as they bear on the decisions which must be made, as we enter what threatens to become the worst economic collapse the world will have experienced, since a period of horrifying religious warfare was ended by the crucial adoption of the 1648 Treaty of Westphalia. The methods accumulated during looting of the former Soviet Union and associated Comecon nations, express the acquired habits that now threaten the ruin of the world as a whole, unless the adducible lesson of this experience of recent decades, described in this book, is learned and applied."

Professor Menshikov analyzes the sudden appearance of private enterprise in Russia after 1991 as "Bolshevism in reverse." He writes, "The post-Soviet Russian reformers' blueprint followed Western neoclassical dogma, according to which, to restructure socialism into capitalism, it should suffice merely to replace state-owned property with private property, and the planned economy with the free play of market forces. In reality, this was Lenin in reverse," since it was only formally that socialism had prepared the ground for capitalism, whereas in practice it had made this task extremely difficult, costing enormous social sacrifices in the form of an acute deterioration of living conditions for the majority of the population."

Chapters of The Anatomy of Russian Capitalism examine that difficult process from different standpoints: economic theory, the composition of privately owned capital in Russia, the state sector, the structure of production and income distribution, economic policy, and Russia's relationship with the globalized economy. The English edition is substantially updated from the Russian book, published in 2004, allowing a comparison of two basic periods: from the end of the Soviet Union until the Russian government bond default of August 1998, and the attempts at relaunching economic growth in 1999-2006 under Putin's administration.