The world is presently gripped by a hyperinflationary wave-front of a Riemannian type. The situation is already comparable, at its primary-commodities "spear point," to Germany during the second half of 1923, with the other categories, such as consumer prices generally, on the way to being driven to overtake the effects seen currently in the domain of primary commodities being led, as a pack, by wild-eyed petroleum-price speculation.

Think of the way in which a "sonic boom" moves across the landscape, with its point running ahead and the effects on the ground coming up afterwards as the conical front of the wave moves onward. Think of a shaped charge detonation "seen" from the "inside."

From that standpoint, the system as a whole is already in a state comparable to some point in the second half of 1923 Weimar Germany. We must estimate the general shape of that monetary-financial-economic "sonic boom" front's movements, slightly understating the actual effects for the sake of not stumbling into accidental overestimations which might impair the credibility of our warnings. However, among us, consider the hyperinflationary explosion fully on, in ways comparable to the second half of 1923.

[Click on the chart or here for a high-resolution PDF version.] 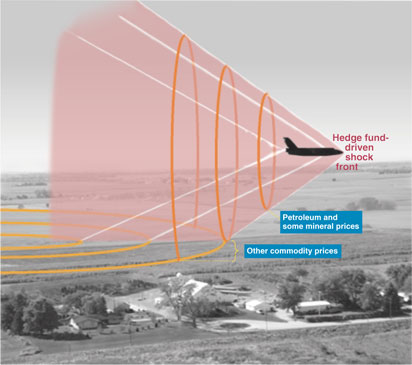 The present hedge-fund driven hyperinflation is comparable to a sonic boom moving across the landscape. At the tip of the cone, where the shock front forms, is the speculative bubble in hedge funds and related derivatives, orders of magnitude larger in monetary value than the physical economy. The commodity price inflation, led by petroleum and certain minerals, is dragged along in the opening conical tail. Prices of other commodities and consumer goods lag behind in time and are diffused as they spread out in the conical opening.

As in the Gauss-Riemann representation of the complex domain, visible or empirically determinable measures (in this case prices) are actually being determined in the non-visible, complex domain. A Riemann-type shock front forms at the cone-shaped boundary layer where the rate of increase of out-of-control speculation confronts the declining rate of real physical economic growth.

Beyond that broad brush, historical view of the matter, there are significant differences in detail which we must recognize.

The leading edge of this rising hyperinflationary panic is the hedge-fund crisis centered in hot spots such as the Cayman Islands (where Satan spends his weekends visiting his closest human relatives, and their money). In the attempt to bail out of the Spring bubble's collapse, the hedge-fund money focussed on hyperinflationary gambles in primary materials, led by the control over petroleum markets. The attempt to turn vast masses of newly generated fictitious liquidity into apparent profits in commodities, that at rates sufficient to stave off the inevitable collapse of their monetary-financial system, a shock-wave-front-line acceleration of primary materials rise, led by petroleum prices, moved like an accelerating supersonic vehicle across and above the landscape below, sending shattering shocks to the land-based economy as the trailing edge of the cone touched land below.

Thus, the rate of inflationary rise of prices of petroleum and related primary commodities now, is the rate which is already in the process of striking commodities on the land below the passing of the hedge-fund-driven hyperinflationary shock-point.

That is the gist of the way in which you must think about this situation. What is hitting in the petroleum-price domain is the current trend of onrush of prices of all commodities in general. Do not commit the blunder of measuring price-changes from the ground up; the rate of change on the ground-level is actually the rate of change expressed as oil-price inflation.