China and the United States

Now, there’s only one other power on this planet, which can be so insolent as that, toward other powers, and that’s the [People’s] Republic of China. Now, China is engaged, presently, in a great infrastructure-building project, in which my wife and others have had an ongoing engagement over some years. There’s a great reform in China, which is a troubled reform. They’re trying to solve a problem; that doesn’t mean there is no problem. But they’re trying to solve it. Therefore, if the United States, the President of the United States, and China, participate in fostering that project, sometimes called the “Silk Road’’ Project, sometimes the “Land-Bridge’’ Project—if that project of developing development corridors, across Eurasia, into Africa, into North America, is extended, that project is enough work, to put this whole planet, into an economic revival. And, I’ll get into just a bit of that, to make it more sensuously concrete to you. 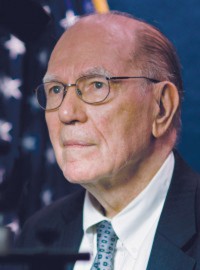 It is time that the damage done by Lyndon LaRouche's incarceration three decades ago be repaired—not only because such a terrible injustice was done to LaRouche, but because that injustice has emboldened the British Empire to use the same methods against a sitting President of the United States, which endangers all of humanity. What better way to defend the United States of America and all of humanity than to exonerate LaRouche, ensure that his policies are at last adopted, and recognize the ideas for what they are—the acts of one of history's greatest geniuses—affording him his rightful place in history?

Now, China has had cooperation with the government of Iran for some time. Iran has actually been completing a number of rail links, which are an extension of China’s Land-Bridge program, or Silk Road project. More recently, we’ve had on the side of India, from Indian leadership which has met with the representatives of China, to engage in an additional route, among the land routes for the Land-Bridge program. One goes into Kunming in China. I was in that area, was in Myitkyina, during part of World War II, and out of Myitkyina, we had planes flying into Kunming, “Over the Hump,’’ as they used to say in those days. I’m quite familiar with that area. But if you have water connections, canal connections, and rail connections, from Kunming, through Myitkyina, that area, across Bangladesh into India, through Pakistan, into Iran, up to the area just above Tehran, south of the Caspian, you have linked to the Middle East; you have linked to Central Asia; you have linked to Turkey; you have linked to Europe.

Then you have a Northern Route, which is pretty much the route of the Trans-Siberian Railroad, which was built under American influence and American advice, by Russia. You have a middle route, which is being developed in Central Asia, with China and Iran. India is working on a plan, which involves only a few hundreds of kilometers of rail to be added, though a lot of other improvements along the right-of-way, which would link the area north of Tehran, through Pakistan, India, through Bangladesh, through Myanmar, into Kunming, into Thailand, into Vietnam, down through Malaysia and Singapore, across the straits by a great bridge, into Indonesia. There’s a plan also for the development of a rail link, through what was Northern Siberia, across the Bering Straits, into Alaska, and down in the United States. There’s a Middle East link—several links, from Europe as well as from China—but from China, a Middle East link, into Egypt, into all of Africa.

So that, what we have here, is a set of projects, which are not just transportation projects, like the Transcontinental Railroads in the United States, which was the precedent for this idea, back in the late 1860s and 1870s. But you have development corridors, where you develop on an area of 50 to 70 kilometers either side of your rail link, your pipeline, so forth—you develop this area with industry, with mining, with all these kinds of things, which is the way you pay for a transportation link. Because of all the rich economic activity: every few kilometers of distance along this link, there’s something going on, some economic activity. People working; people building things; people doing things. To transform this planet, in great projects of infrastructure-building, which will give you the great industries, the new industries, the new agriculture, and other things we desperately need. There is no need for anybody on this planet, who is able to work, to be out of work! It’s that simple. And that project is the means.

If the nations, which agree with China, which now includes Russia, Iran, India, other nations—if they engage in a commitment to that project, which they’re building every day. If the United States, that is, the President of the United States, Clinton, continues to support that effort, as he’s been doing, at least politically, then what do you have? You have the United States and China, and a bunch of other countries, ganged up together. Against the greatest power on the planet, which is the British Empire, called the British Commonwealth. That’s the enemy.

And if on one bright day, say, a Sunday morning, after a weekend meeting, the President of the United States, the President of China, and a few other people, say, “We have determined this weekend, based on our advisors and the facts, that the international financial and monetary system is hopelessly bankrupt. And we, in our responsibility as heads of state, must put these bankrupt institutions into bankruptcy reorganization, in the public interest. And it is in our interest, to cooperate as nations in doing this, to avoid creating chaos on this planet.’’ The result then, is that such an announcement, on a bright Sunday morning, will certainly spin the talking heads on Washington TV. But, otherwise, it means that the entire system, as of that moment, has been put through the guillotine, and the head is rolling down the street. (Alan Greenspan’s head, perhaps.) That means, we have, at that point, the impetus for building, immediately, a new financial and monetary system.

Now, in putting a corporation which is bankrupt, into viable form, what do you do? You’ve got to find the business that it’s going to do, which is the basis for creating the new credit, to get that firm going again. The Land-Bridge program, with its implications on a global scale, is the great project, which spins off, directly and indirectly, enough business, so to speak, for every part of this world, to get this world back on a sound basis again.