The McCarthyite Assault on China Must Be Stopped 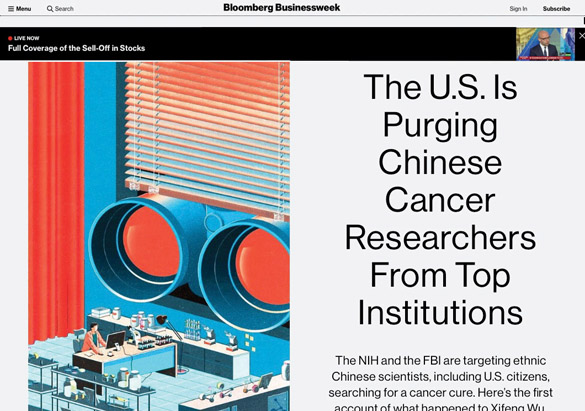 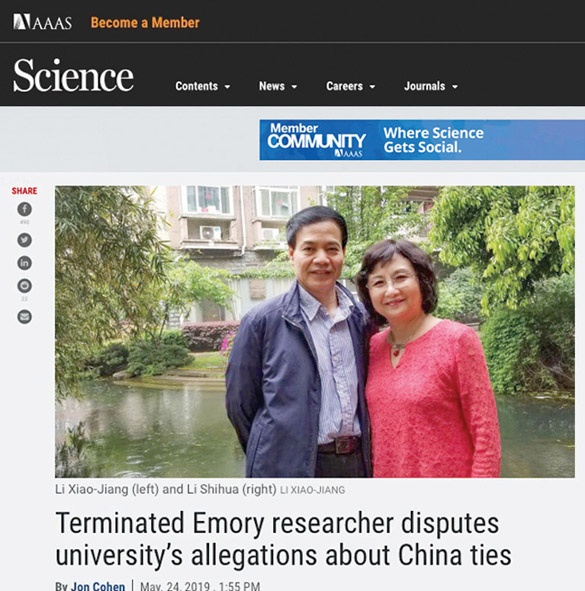 Nearly all Americans, if asked about the McCarthy-era anti-Communist hysteria during the Truman Administration in the 1950s, will tell you that it was a dark page in U.S. history, a witch-hunt based on lies and innuendo that should never be allowed to happen again. Yet, the United States is now in the depths of a witch-hunt every bit as vicious, whose authors intend to poison relations between two major powers whose cooperation is essential to resolving the current global financial crisis and bring about a new paradigm based on peace and development.

Despite the fact that President Donald Trump insists that the U.S. should be friends with China, and is negotiating what he calls an “epic deal” with Beijing, the Congress, the FBI, and the media—the anti-Trump TV networks and the supposedly pro-Trump TV networks such as Fox News alike—are engaged in a massive campaign to demonize China, painting that nation as an imperial power attempting to take over the world and “undermine our way of life.” Chinese and Chinese-Americans, no matter how long they have been U.S. citizens, are being targeted by the FBI for harassment, thrown out of their jobs, accused of being spies and traitors based on nothing but the fact that they have contact with friends, family, and associates in China.

As of October 16, the State Department has declared that any diplomat from China—in their Embassy, their UN Mission, or the Chinese Consulates around the country—must report to the State Department every time they intend to hold a meeting with any American state, local, or municipal official or any educational or research institution. Given the FBI’s targeting of Chinese, as you will read below, and the Congressional efforts to demonize any institutions with Chinese ties, this move is meant to intimidate not only China, but also Americans who work with China at any level. 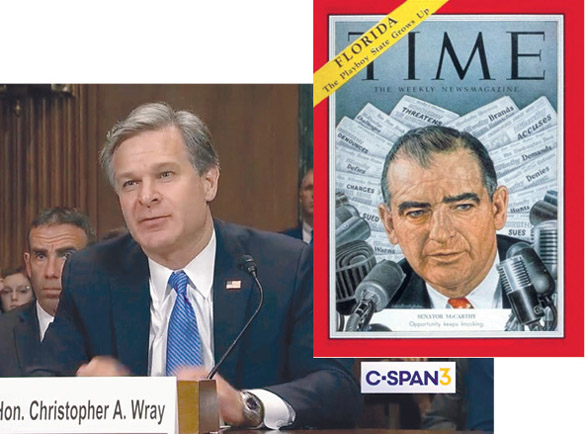 It is shocking, but not surprising, that the same institutions—especially the corrupt FBI—that have carried out the failed coup attempt against President Donald Trump over supposed Russian collusion are also engaged in the witch-hunt against China, even as Trump is calling for improving relations and welcoming Chinese students and scientists to come to the United States. Neoconservative and neoliberal forces in the Congress, and even within the Trump Administration, are demanding that nations in Asia, Africa, and South and Central America reject the infrastructure development projects being offered by China’s Belt and Road Initiative, projects that have been denied them for centuries under colonial and neocolonial domination by the West. Vice President Mike Pence and Secretary of State Mike Pompeo are in the forefront of this imperial-style coercion.

Within the United States, the FBI has overseen the revocation of visas held by hundreds of Chinese scholars and analysts who have worked for many years with their American counterparts to build understanding and cooperation between the world’s two most powerful economies. The FBI is also forcing major institutions to fire Chinese scientists working in the United States, many of whom have made major contributions to progress in medical and other scientific fields of great value to the United States and to the world. 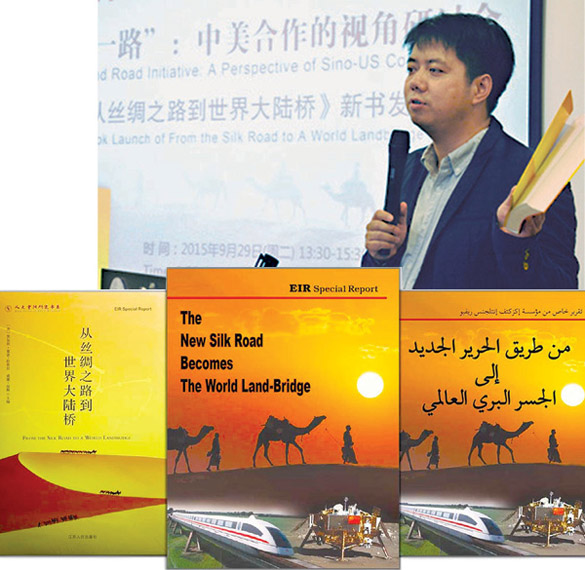 Wang Wen, the head of the Chongyang Institute for Financial Studies at Renmin University in Beijing, is one of the scholars whose visa was revoked, without cause. Wang told the Global Times on April 19:

“[Over 280 Chinese scholars] have had their U.S. visas canceled or obstructed, or have been harassed by FBI agents since 2018.... My visa was canceled after I attended a conference at the Carter Center in Atlanta. Before that, I went to the United States three to five times a year, normally for academic exchange events such as dialogues on trade and South China Sea issues between Chinese and U.S. think tanks. None of these are sensitive activities.”

It is not incidental that Wang Wen’s Chongyang Institute in Beijing had sponsored a symposium on Sept. 29, 2015, in which Helga Zepp-LaRouche presented the Chinese edition of the EIR Special Report, The New Silk Road Becomes the World Land-Bridge. Wang Wen made introductory comments at the press conference, and his institute distributed the report to other institutions around the country.

The FBI’s ‘All Society’ Attack

This attack on intellectual exchanges with China was launched in its current form by FBI Director Christopher Wray. During an appearance before the Senate Intelligence Committee on Feb. 13, 2018, Wray was asked by China-phobe Sen. Marco Rubio (R-FL) about supposed Chinese “infiltration” of U.S. colleges and universities, including students and professors. Wray responded: 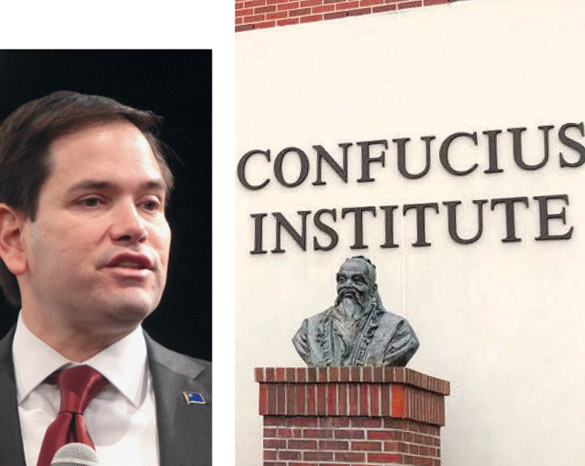 Left: Gage Skidmore; right: wikimedia
Sen. Marco Rubio, who has taken the lead in forcing the shut down of Confucius Institutes, to prevent American students from learning Chinese language and culture.

“I think in this setting I would just say that the use of non-traditional collectors, especially in the academic setting, whether it’s professors, scientists, students, we see in almost every field office that the FBI has around the country…. They’re exploiting the very open research and development environment that we have, which we all revere, but they’re taking advantage of it. So, one of the things we’re trying to do is view the China threat as not just a `whole-of-government’ threat but a `whole-of-society’ threat on their end, and I think it’s going to take a whole-of-society response by us. So, it’s not just the intelligence community, but it’s raising awareness within our academic sector, within our private sector, as part of the defense.”

This is the same “whole-of-society” information warfare that is being used to target President Trump.

In April 2019, in the first public FBI operation to sabotage U.S.-China scientific cooperation, three leading Chinese-American researchers at the MD Anderson Cancer Center were fired, while at least another 20 were under investigation, accused by the FBI of stealing “American” research, and failure to report matters related to their ties to Chinese laboratories and research centers. MD Anderson is part of the Texas Medical Center of Houston (TMC), considered one of the best in the world. The Chinese government is in negotiations with TMC for its help and its example in establishing a huge new medical center near Beijing.

In fact, scientists from China or of Chinese descent are under investigation by the FBI in literally thousands of research facilities across the country, a project launched in 2015 under the Obama Administration. More than 10,000 institutions—repeat, 10,000 institutions—have been instructed to turn over emails and computer and other work data of literally thousands of scientists, or face a cut in National Institutes of Health (NIH) funding. Dozens of leading scientists have now been forced out of their jobs, and those who are not U.S. citizens have been deported.

It is crucial that Americans understand that this witch-hunt against Chinese scholars and scientists is an attack not only on China, but also on the United States, and indeed on the future of mankind. Scientific progress, like great art, is universal, contributing to the advancement of the human condition throughout the world, and for all time. Restricting and restraining such advances in human knowledge is, as it always has been, the centerpiece of Empire, of imperial domination, and is abhorrent to those who understand the American System developed by geniuses like Benjamin Franklin and Alexander Hamilton.

Look at the accomplishments of the MD Anderson Cancer Center, the initial target of this expanding FBI operation, which employs scientists from around the world, proudly collaborating to cure cancer. The Center published a list of the “shared research outputs” with hundreds of institutions around the world. In China, this included: Sun Yat Sen University, 2,342 shared research outputs; Fudan University, 1,387; Tianjin Medical University, 1,250; Shanghai Jiao Tong University, 559; Chinese Academy of Medical Sciences, 408; and on and on—dozens of Chinese institutions working together with the Center for a common goal of improving the lives of citizens everywhere.

Was this a subversive attempt to steal U.S. secrets, to advance Chinese ambitions to undermine the Western world? What sick, twisted mind would argue that?

The research universities are speaking out. MIT President L. Rafael Reif said these FBI operations “have turned the volume all the way up on the message that the U.S. is closing the door—that we no longer seek to be a magnet for the world’s most driven and creative individuals. I believe this message is not consistent with how America has succeeded.”

The “Committee of 100,” a national, non-partisan leadership organization of prominent Chinese Americans in business, government, academia, and the arts for the past 30 years, issued a statement on April 7 titled, “Committee of 100 Condemns Chinese American Racial Profiling,” which reads in part: “The members of the Committee of 100—all United States citizens—are compelled to stand up and speak out against the racial profiling that has become increasingly common in the United States, where Chinese Americans are being targeted as potential traitors, spies, and agents of foreign influence. . . . In the last few years, a few high American government officials, respected media outlets, and opinion leaders have stated or suggested that all Chinese persons in America should be suspected of wrongdoing …. Such targeting of individuals based on their ethnic heritage or national origin violates our shared American ideals. It simply has to stop.”

The research universities are also speaking out. University of Pittsburgh Chancellor Patrick Gallagher said: “For the first time since the end of the Cold War, university-based research and scholarship are facing calls to restrict global engagement. A rising tide of fear is fueling uncertainty, confusion and rapidly changing responses by our federal agencies, and the effects of government policies on research universities have been especially striking.”

MIT President L. Rafael Reif said these FBI operations “have turned the volume all the way up on the message that the U.S. is closing the door – that we no longer seek to be a magnet for the world’s most driven and creative individuals. I believe this message is not consistent with how America has succeeded.”

Senators Rubio and Ted Cruz (R-TX) have been waging a campaign, partially successful, to shut down the more than 100 Confucius Institutes across the United States. The Institutes provide teachers and partial funding at universities and municipal school systems for Chinese language training and classes on Chinese culture. Senator Rubio referred to the Confucius Institutes as part of “China’s aggressive campaign to ’infiltrate’ American classrooms, stifle free inquiry, and subvert free expression both at home and abroad.” At least 10 of the Institutes have been shut down under such pressure. 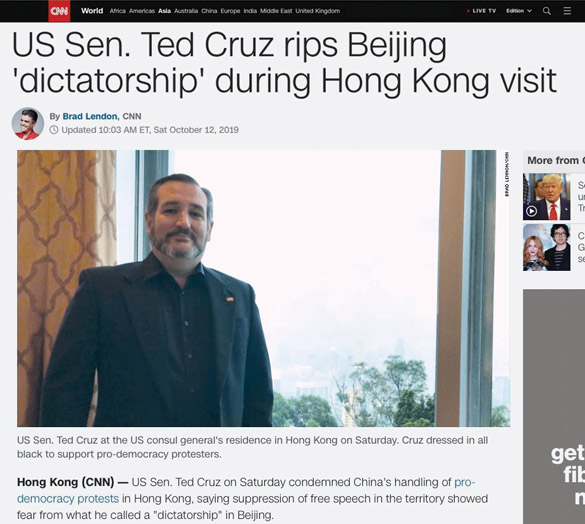 Sen. Ted Cruz, dressed in black in Hong Kong to "show solidarity" with anarchists killing and burning down the city

These operations against China and the Chinese do not stop at legal and political harassment. The mass riots in Hong Kong which fill the airwaves around the world have been openly sponsored, with money and training, by the “regime change” operatives in London and Washington, including the National Endowment for Democracy and the George Soros–funded institutions. While the black-clad and masked anarchists fire-bomb police stations, shops, and subway stations; shut down the international airport; and beat police and reporters with metal pipes, they are described as “peaceful demonstrators for freedom and democracy.”

Senator Cruz took this even further, travelling to Hong Kong in October, donning the anarchist black garb in order to “show solidarity” with the violent gangs, while denouncing the Hong Kong government.

We, as citizens of the United States, must end this renewed McCarthyite madness.