The World Looks to theBelt and Road Initiative:If China Can Do It, Why Not We?

A 2014 Chinese map of the Belt and Road.
View full size 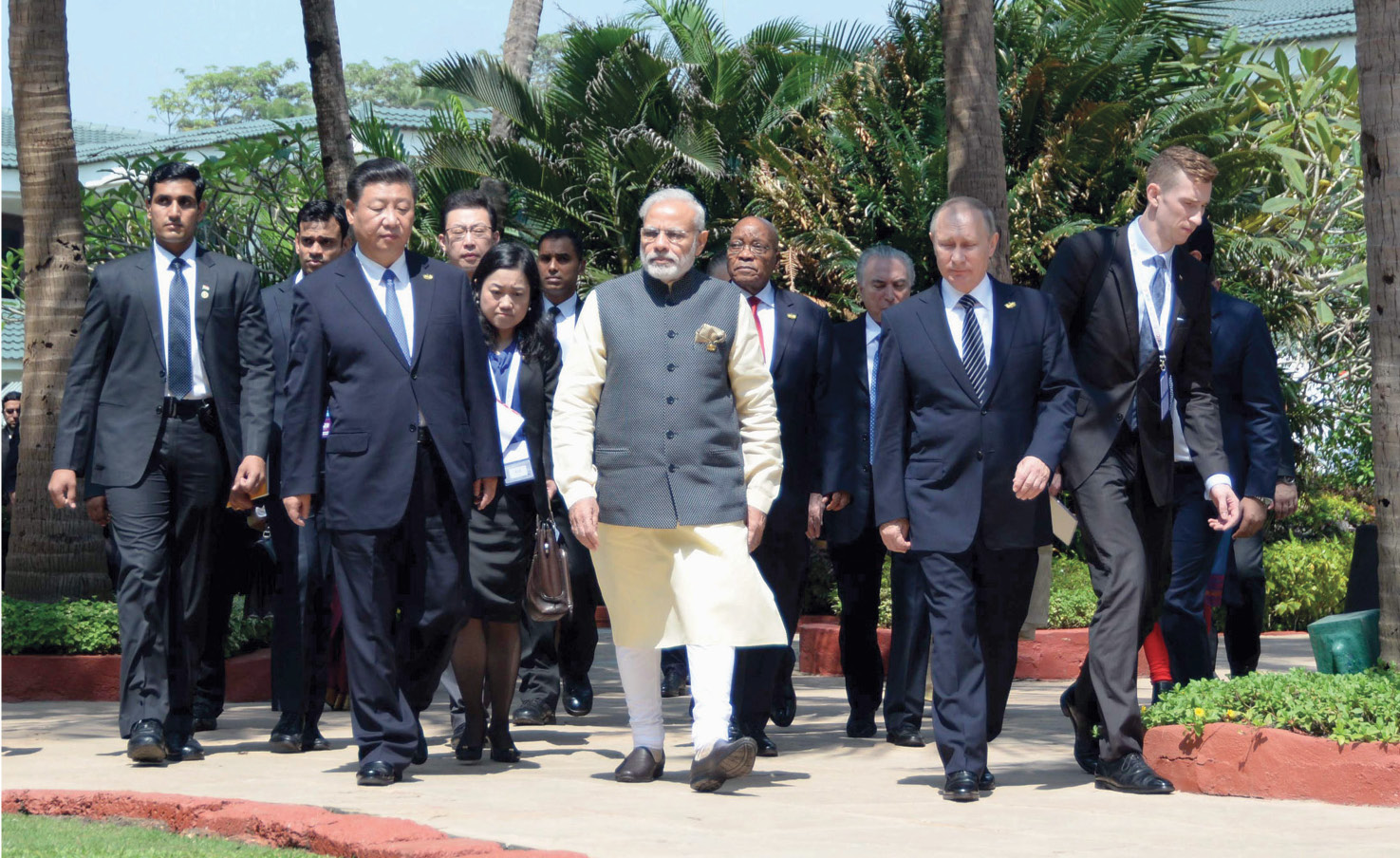 In the six years since the Belt and Road Initiative was launched in 2013, some 157 nations worldwide have started working directly with China’s massive global infrastructure program. As the City of London and Wall Street gnash their teeth and try to stop the tidal wave with threats and slanders, nation after nation from every part of the planet have looked at China’s stunning achievements in science, infrastructure building, and above all poverty reduction, and are asking themselves the obvious question: If China can do it, why not we?

Nor have those 157 nations fallen for the lies that China’s BRI is just a new form of colonialism, that China is a predator out to loot their resources, that they are being duped into a Chinese “debt trap,” or that they will be forced to adopt Communist ideology. “We have found an honorable partner in China,” stated Kenya’s President Uhuru Kenyatta in May 2017, hailing their booming relationship as one “based on mutual trust.”

Chinese President Xi Jinping’s offer of “win-win” cooperation to build a “community of shared interests” has undoubtedly struck a resonant chord around the world. But more influential still has been the simple, stunning success of China’s economic policy in pulling some 850 million Chinese out of poverty in less than 40 years. That is more than 10% of the entire human race that is no longer being destroyed by poverty; 10% of humanity that is now in a position to make a valuable contribution to mankind’s productivity and help shape its future (see Fig. 1: China and World Poverty). Whereas China’s poor population constituted about 46% of the world total in 1981, today it is down to 5%, and is being reduced quickly to 0. 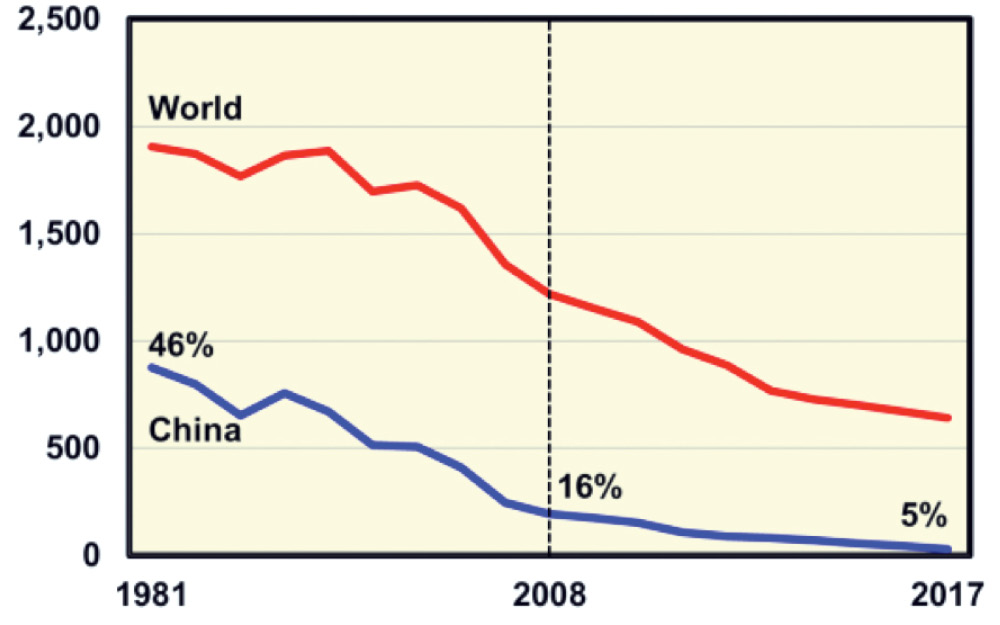 To understand the full implications of this transformation – and the way it is shaping the expansion of the BRI internationally, we must briefly consider it from the standpoint of Lyndon LaRouche’s science of physical economy.

The power of a society and its economy, LaRouche has explained, is best measured by its ability to foster a growing Potential Relative Population Density. In his 1984 textbook So You Wish to Learn All About Economics? LaRouche wrote: “It is readily comprehended, that the increase of man’s power over nature is most easily measured as a decrease of the habitable land area required to sustain an average person… The name for this measurement is, in first approximation, population-density. Given a society’s level of technology in practice, how many persons can be sustained, per square kilometer, solely by means of the labor of the society’s population?”

LaRouche went on to qualify the concept, noting that relative qualities of land area have to be taken into account, as well as the discrepancy between the actual population density and the potential population density implied by the existing level of technology. Thus: Potential Relative Population Density.

The source of this rising power is a growing population, which lives longer, and which is increasingly educated and creative—which is the real source of all productivity. 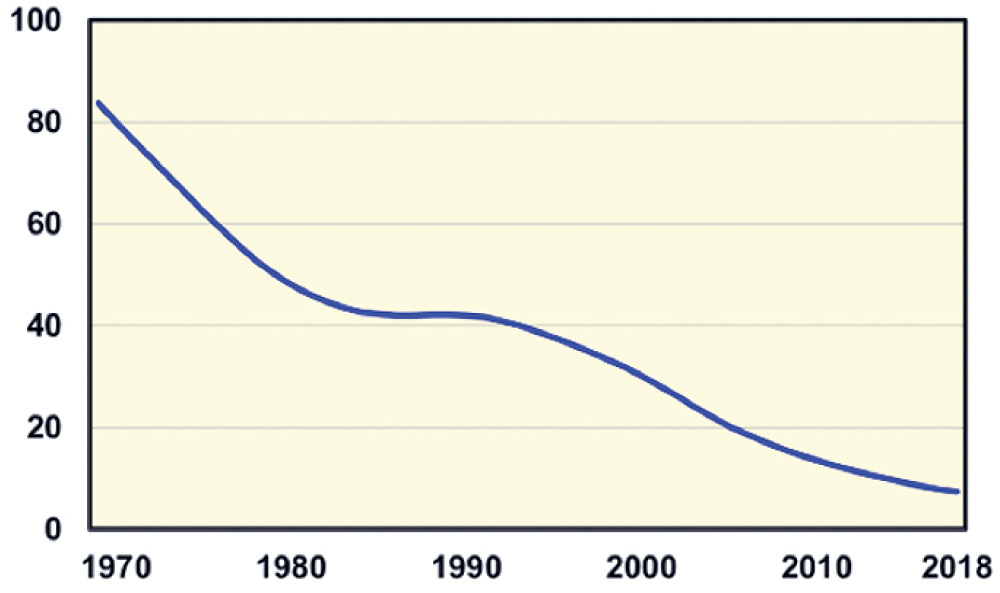 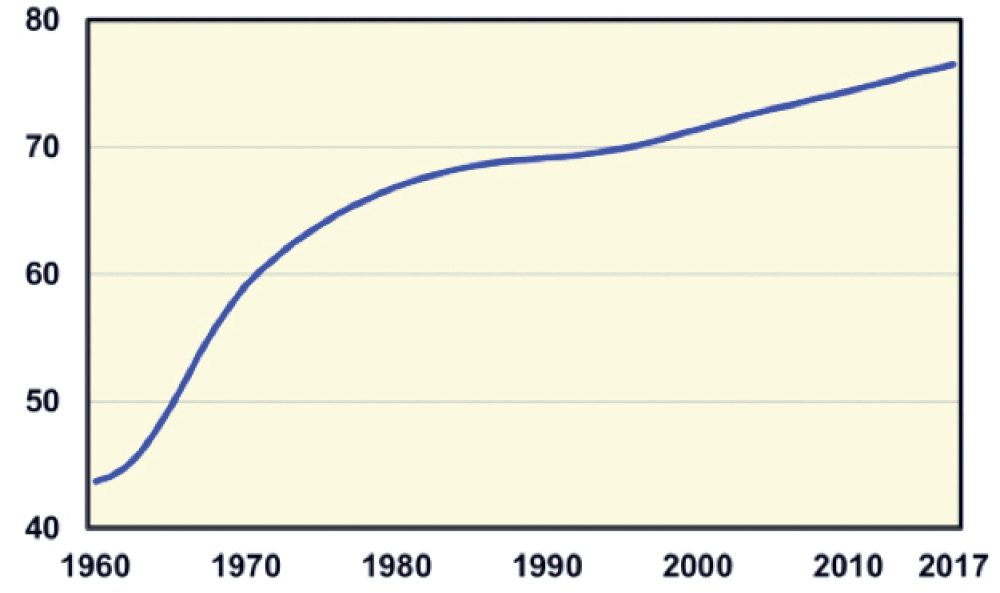 Now consider China’s demographics from this standpoint. It is well known that China has the world’s largest population, currently clocking in at 1.39 billion people, with India in close second with 1.35 billion inhabitants. But China not only has double the population it had back in 1960; it has also seen dramatic improvements, such as a sharp drop in infant mortality (see Fig. 2, Infant Mortality), which have contributed to overall life expectancy rising from only 43.7 years in 1960 (which was well under the world average of 52.6), to 76.5 years today (above the world average of 72.5)—see Fig. 3, Life Expectancy. So not only is China’s population growing in absolute numbers, but it is living longer on average – i.e., it has significantly more years in which to engage in productive activity. 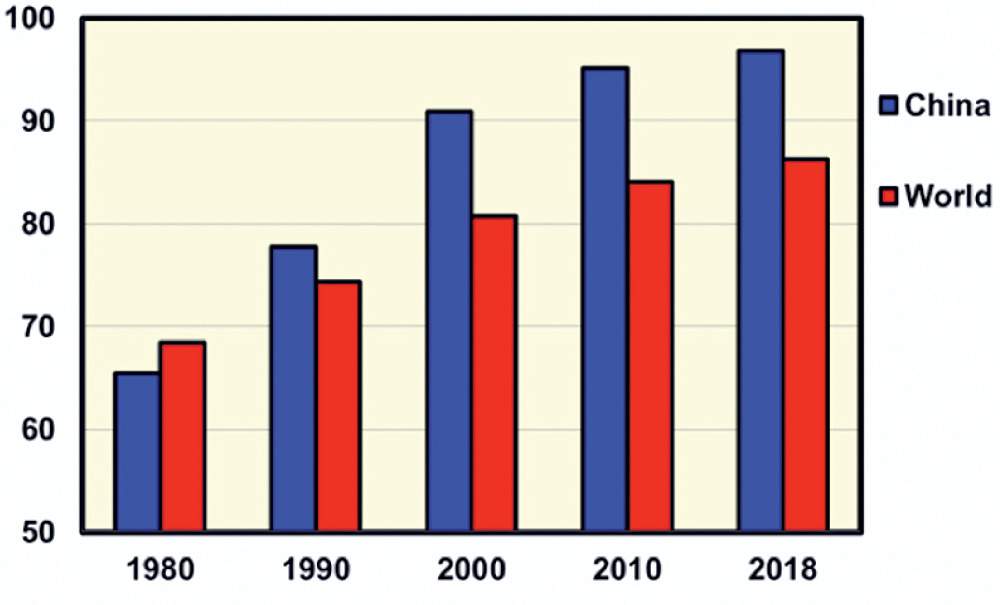 Add to that the overall rise in educational and scientific capabilities of that growing population, as reflected in parameters such as a rising literacy rate that has far outstripped the world average (see Fig. 4, Literacy), and the record-breaking reduction of overall poverty noted above, and a clearer picture emerges of a nation with the planet’s most rapidly rising Potential Relative Population Density.

An overall sense of the global expansion of the Belt and Road Initiative can be gained from a bird’s-eye-view of developments on just two continents: Africa and Ibero-America.

Africa, bled dry for centuries by British, French, Portuguese, Belgian, Spanish, and Dutch imperialism, has finally found an ally in China, which has taken the lead in building transport and power infrastructure throughout Africa. Africa’s population is currently 1.2 billion, but it is the fastest growing continent on the planet, and is expected to double to reach some 2.4 billion by 2050. In that year, its working-age population will be about 1.3 billion, nearly double China’s forecast 700 million for that year.

As the Schiller Institute reported in its November 2017 study, “Extending the New Silk Road to West Asia and Africa,” as early as May 2014, while on a tour to several African nations, Chinese Premier Li Keqiang projected an optimistic vision of Chinese-aided industrial and infrastructural growth for the African continent. Li advocated an increase in Chinese industrial investment in Africa, and Chinese-aided infrastructure construction, policies that will raise standards of living, and propel Africa into a new economic platform. He stated specifically that one of China’s goals is to fulfill the dream of connecting all African capitals with high-speed rail, to boost pan-African communication and development. 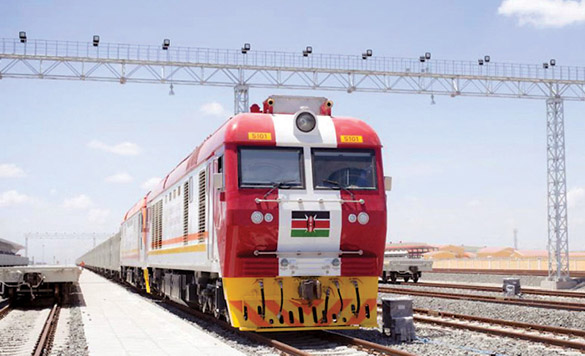 The Standard Gauge Railway connecting Kenya’s capital Nairobi to the port city Mombasa, built by China, opened in 2017 -- the largest infrastructure project in Kenya since independence in 1963.

Examples of the transformational projects under way or completed since Li’s 2014 trip:

• a $13.1 billion deal to build a coastal railway in Nigeria, from Lagos to Calabar.

• a $3.8 billion rail link between Kenya’s Indian Ocean port city of Mombasa and the capital, Nairobi, as the first stage of a line that will eventually link Uganda, Rwanda, Burundi, South Sudan and Ethiopia.

• the Addis Ababa–Djibouti 750 km electrified Standard Gauge Railway. It connects landlocked Ethiopia and its 90 million population to world transport routes and the Maritime Silk Road through the Port of Djibouti.

The aforementioned Schiller report on Africa noted that the global consultancy firm McKinsey & Company revealed in a 2017 report on China’s role in Africa the following stunning facts: China is now Africa’s largest trading partner; Chinese trade with Africa is growing at 20% per year, and foreign direct investment at 40%; China is Africa’s largest source of construction aid; of the 10,000 Chinese firms in Africa, 90% are privately owned, not state owned, with a third of them in manufacturing.

The McKinsey report also showed that the common perception of Chinese firms bringing hundreds of thousands of Chinese laborers to Africa, rather than employing locals, is not true. Among the 1,000 Chinese companies surveyed, 89% of the employees were African, adding up to nearly 300,000 jobs for African workers. Projecting these figures to all 10,000 Chinese firms in Africa, this suggests that Chinese-owned businesses employ several million Africans!

Furthermore, 44% of the managers at these firms are Africans, while skills training is provided by 64% of the Chinese employers, and there is a significant level of technology transfer.

Will the Americas Join the Belt and Road?

The Belt and Road’s biggest calling card in Latin America and the Caribbean, where millions of men, women and children live and beg on the streets, or risk their lives to reach a United States which no longer welcomes them, is China’s success at eradicating poverty at home, and its doing so by transforming its once-underdeveloped economy into one of the greatest scientific and technological powerhouses on the planet.

According to the World Bank, as of 2015, 130 million people, or one in five of the 648 million people then-living in Latin America and the Caribbean (LAC), lived in chronic poverty. Adding in the “transient poor” (those temporarily driven into poverty), the World Bank estimated the number of poor at over 160 million, or one in four of its people. Furthermore, while China moves forward towards its goal of eliminating all poverty by the end of 2020, the number of poor in the LAC region is rising.

That difference has not gone unnoticed. Mexican Congressman Gerardo Fernández Noroña, initially no fan of the BRI, repeated with awe to his constituents back home every day during his trip to China as a member of the Mexican delegation to the second Belt and Road Forum in April, 2019: “There are no people living in the street here! There are no children begging!”

Latin America and the Caribbean is the most recent region of the world to be incorporated into the Belt and Road Initiative. As of June 1, 2019, 19 of the region’s 33 countries have signed agreements to participate in the BRI. The “Big Four” missing from that number —Argentina, Brazil, Colombia and Mexico—are actively weighing joining. More quietly, several of the Central American and Caribbean countries which still have diplomatic ties with Taiwan are studying whether to establish relations instead with the People’s Republic of China (PRC), in order to participate in the BRI.

Trade relations between China and the region have been growing at astonishing rates, increasing from $17 billion in 2002 to almost $306 billion in 2018. Similarly, Chinese state banks provided more financing over 2005-2018 than the World Bank and the IADB combined, as traditional capital flows to the region fell dramatically after the 2008-2009 global financial crisis. Chinese foreign direct investment reached over $200 billion by 2017.

And the perspective looking forward is even more encouraging for the LAC region. On November 2016, China issued a “Policy Paper on Latin America and the Caribbean,” which outlined an ambitious agenda for joint development with the region, assisting these nations not only with infrastructure and long-overdue 20th century industries, but also with what they need to leapfrog to such frontiers of human knowledge in the 21st century as space and nuclear power.

The report presented plans for cooperation in: downstream industries, to encompass the entire production chain rather than only mining; high tech industry development and research facilities; civil nuclear energy research and development; space technology as a driving force for the scientific, technological and industrial development of the region

The contrast could not be greater with recent decades of Western assistance limited to new debt issued to repay old loans, at ever-higher interest rates and tied to International Monetary Fund conditionalities of austerity, public disinvestment, with no big infrastructure projects.

The second China-CELAC Foreign Ministers Forum, held on January 22, 2018 in Santiago, Chile, became the decisive turning point for LAC participation in the BRI. Chinese Foreign Minister Wang Yi came to the meeting with the message that Latin America and the Caribbean are “indispensable participants in the Belt and Road’s international cooperation.” All 33 CELAC member states were present. Within the next eighteen months, 19 nations signed MOU’s with China to participate in the Belt and Road, including the Dominican Republic and El Salvador, which as Panama had done earlier, established diplomatic relations with the PRC in order to join the BRI.

Much of the LAC region is staking its future on the BRI, and its far-sighted leaders understand that to succeed, they must win the United States over to the new global paradigm of a “community of common destiny.” In a speech not long after Panama opened relations with China in June 2017, the Panama Canal Authority’s economist, Eddie Tapiero, argued the case succinctly: The BRI “will change the world in the coming years…. The United States as the main partner of all countries in Latin America needs to be part of the initiative. With all the players working towards the same goal, the countries will achieve a balance in their strength and stability in the long term.’’