Back to Special Report Table of Contents

This article appears in the August 16, 2019 issue of Executive Intelligence Review.

Frontal Assault on Our Living Standard: Multibillionaires Are Financing the ‘Climate Protectors’!

Aug. 10—The news is out. According to the latest report of the Intergovernmental Panel on Climate Change (IPCC), the state of the Earth is catastrophic, but we still have a chance. All we have to do is listen to 16-year-old climate figurehead Greta Thunberg of Sweden, the “Extinction Rebellion,” and Dennis Meadows. Not only do we need to be ashamed to fly; we also need to be ashamed to eat meat, or food generally, to drive cars, travel, heat our homes, and, to get right down to it, we should be ashamed that we exist, because it were better for the climate if we didn’t! And, of course, if you haven’t noticed yet: Snow is black!

Anyone who thinks the trans-Atlantic establishment and its science and media PR lobbyists have gone crazy, has a point. But the madness has a method: The apocalyptic theses of this so-called Intergovernmental Panel on Climate Change on the alleged vicious cycle of unsustainable agriculture, global warming, and extreme weather, are supposed to indoctrinate the population into voluntarily giving up consumption, accepting higher taxes to subsidize the steering of financial flows into so-called “green” investments, accepting dictatorial forms of government and—this is now frankly expressed—accepting a massive reduction of the world population.

The IPCC report is in fact a long-fermented wine in new bottles, and the argument presented there is ultimately based on the theory, both simplistic and false, of Thomas Malthus, which claims that humanity increases at a geometric rate, while resources, including food production, can only be increased at a slower arithmetic rate. One of the leading neo-Malthusians, Al Gore, added a little sweetener to this wine, admitting that Malthus, of course, could not have foreseen that humankind would make improvements in agricultural technology and therefore could enormously increase the amount of food that can be produced on Earth. But—now the vinegar comes into the wine—to escape this “Malthusian dilemma,” man, like Dr. Faustus, entered into a pact with the devil and committed himself to scientific revolutions. 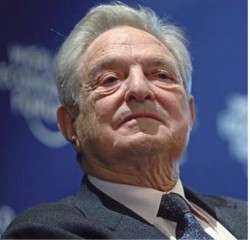 CC by SA 2.0
Above: George Soros, one of a number of multi-billionaire funders of the radical climate change movement. Below: Extinction Rebellion demo in London and a FridaysForFuture demo in Germany.
View full size 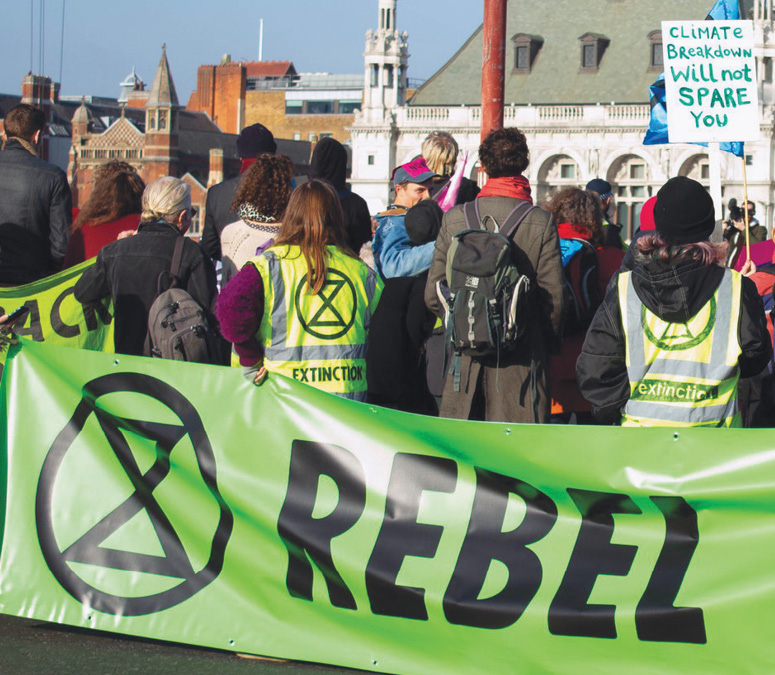 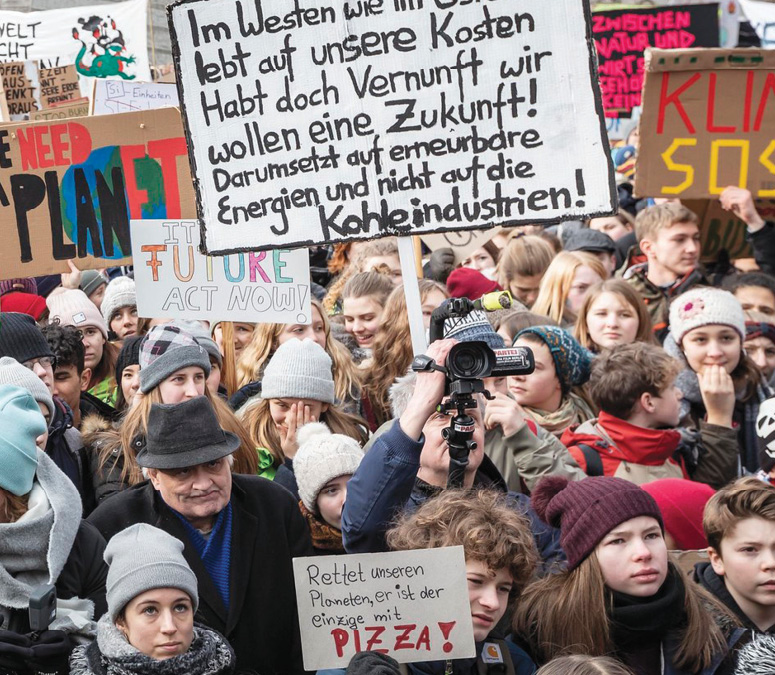 So the present-day neo-Malthusians, including the IPCC, are operating from exactly this idea. The achievements of modern agriculture, which has enabled at least a significant part of humanity to have an improved, protein-rich diet, are vilified: meat consumption, as well as other results of scientific progress, are to blame for climate change, and the world can only be saved if we give up driving, flying, heating and air conditioning. And the world population should no longer grow, but must shrink. So, back to the population and living standards of pre-industrial times: horse-drawn carriages for the rich, bicycles or going on foot for the others, and healthy potatoes and millet porridge, this time touted as a vegan diet.

Who Is Funding the Greenies?

A closer look at the financing of Greta Thunberg, the Extinction Rebellion (XR) and Fridays for Future reveals that this movement is being funded by the richest people on Earth. Among the founders and periphery of the Climate Emergency Fund (CEF), are to be found Rory Kennedy, the daughter of Robert Kennedy; Aileen Getty, daughter of the late John Paul Getty; and the “philanthropist” Trevor Neilson, whose career has included various forms of collaboration with Bill Gates, Warren Buffett, George Soros and Ted Turner. According to the Guardian, the CEF has already transferred 500,000 euros to XR, which will soon be followed by “ten times as much” money. Breitbart has published internal documents from XR, revealing further five- and six-figure donations by Soros, the European Climate Foundation, the Tides Foundation, and Greenpeace Furka Holdings AG, among others.

Such amounts, of course, are proverbial “peanuts” for jet setters who travel on private planes, helicopters and mega-yachts. Oh yes, and Greta has just embarked on one of these nautical trips to America—“to save flight fuel.” And XR’s Action Handbook, This Is Not a Drill, was generously okayed for publication by Penguin Publishers months before its original release date.

At least these sources of funding make it clear that this is a “fake” rebellion. It is not a grassroots movement, but the Greta hype and XR are the result of a well-orchestrated propaganda campaign that uses modern arguments to create a political climate in which the establishment of fascist dictatorships is accepted as unavoidable.

Surprisingly, one of the authors of the 1972 computer-model-based study Limits to Growth, Dennis Meadows, recently revealed this blatantly in an article in the French newspaper Libération. He writes that climate change and the depletion of fossil energy resources are destroying the basis for the present model of industrial society, refugee flows and famine will increase the chaos, and one thing can be learned from history: that if people have the choice between order and freedom, they will always choose order. Personal liberties are already limited, and this tendency will continue. While this will not resolve the problems that created the chaos, says Meadows, in the short term the political power and financial wealth of those who support authoritarianism will multiply.

A look at history reveals another dimension of the current propaganda campaign. This is not the first time that the financial oligarchy has reacted to a systemic financial and monetary crisis by supporting fascist movements and establishing authoritarian, dictatorial regimes. The international financing of the Nazis by the Governor of the Bank of England, Montagu Norman, and by Brown Brothers Harriman—the bank of the Harriman clan, who also supported the eugenics movement in the United States—is a well-documented fact.

History repeats itself, but never in the same way. What was then the racism of eugenics, is today the inhuman doctrine of alleged overpopulation, which was reformulated by ideologists like Julian Huxley in 1946 as an outgrowth of eugenics, because that term was discredited by the Nazis, and therefore a “radical eugenic policy will be for many years politically and psychologically impossible.” Today it is supposedly this overpopulation that is destroying our Lebensraum [“living space,” the term used by Nazi geopoliticians]—the Earth.

At the time, this ideology was the breeding ground for the fascist shock troops, who saw their acts of violence justified either by a supposed threat of “communists” or by “non-Aryan” people. And if today’s planet really only has 18 months (as Prince Charles now says), why should not a young person of 17 or 19 years do everything to fight the apparent cause—industrial society—using all available means?

The same media who report on every sound Greta makes as though it were Einstein’s discovery of the general theory of relativity, are dead silent about a passage in the text of the manifesto of the suspected mass shooter of El Paso, where 22 people were recently killed and 24 injured. It does not reflect the policy of President Trump in the least, but very much that of his opponents. The passage in question says:

The American lifestyle affords our citizens an incredible quality of life. However, our lifestyle is destroying the environment of our country. The decimation of the environment is creating a massive burden for future generations. Corporations are heading the destruction of our environment by shamelessly overharvesting resources.

I just want to say that I love the people of this country, but god damn most of y’all are just too stubborn to change your lifestyle. So the next logical step is to decrease the number of people in America using resources. If we can get rid of enough people, then our way of life can become more sustainable.

We Are Not Animals! We Are Human!

The main flaw in this image of man—from Malthus and all the neo-Malthusians to poor Greta—is that they have all adopted the oligarchic image of man, which regards the masses of humans as parasites, polluters, and even a sort of animal—and from this point of view their reduction of course appears to be a good thing.

But that’s not what people are. Man differs from all other creatures in that, through his native creativity, he continually discovers new principles of the physical universe, and, with the help of scientific and technological advances, can completely redefine the resources that humanity needs for its survival. The major spacefaring nations, China, Russia, India, the USA, and in this case even Europe with its European Space Agency (ESA), are demonstrating that humanity is about to create a whole new economic platform, in the sense that Lyndon LaRouche has defined. The idea of a “Moon village,” a permanent industrialization of the Moon as a starting point for a future Mars project and interstellar space flight, redefines everything that humans have previously imagined as “resources” on Earth.

The existential danger for humanity today does not lie in an imminent climate catastrophe, but rather, among other things, in a wrong reaction to cyclical climate change. Above all, it consists in the way in which the neo-liberal oligarchy, in the tradition of the1930s, is responding to the new world financial and monetary crisis: by supporting fascist movements and attempting to establish a dictatorship—even if this time an eco-dictatorship.

The same British-dominated oligarchy, just as it did then, is resorting to geopolitics, to the destabilization of alleged adversaries, such as the current attempt to weaken China and Russia through “color revolutions,” and, if possible, to bring about regime change there. That the German Greens Party is a compliant instrument of this geopolitics has been adequately demonstrated by Greens leader Joschka Fischer’s support for the NATO war against Yugoslavia in 1999, as well as by the Greens’ support for a deployment of the German Armed Forces to the Persian Gulf.

If we have learned anything from history, it is not to let those events run their course, if we want to prevent an escalation into a Third World War. We urgently need a return to the Abrahamic-humanistic image of man, which regards man as intellectually and morally infinitely perfectible! Even though this is a minority opinion that, according to Chinese artist/activist Ai Weiwei is not paid any respect in Germany, it is still in accordance with the reality of humanity in the universe.