In a speech April 24 at the prestigious Cultural-Business Dialogue in Baden-Baden, Germany, Helga Zepp-LaRouche addressed the danger of the breakdown crisis of the Western financial system as well as that of a new world war. The alternative to that is the BRICS perspective, she said, which Europeans should seize upon to find a constructive way out of the crisis. That view is also held by many Americans, she stressed, who oppose the destructive geopolitics of the Obama Administration.

The Baden-Baden event was organized by the German-Russian Art Assembly association, It was addressed by senior officials of the Russian Foreign and Finance Ministries, as well as by leading figures of German-Russian economic relations, and by Prof. Shi Ze of the China Institute of International Studies in Beijing.

Though this may not be so obvious: Strategically, we must consider two completely different systems.

One system is based on geopolitical expansion, on monetarism, on maximization of the profits of a few. Should this system prevail, it may lead to the extinction of the human race.

Fortunately, there is an entirely different system, of which you of course have some knowledge, but you may not know the full scope: Namely, that a completely parallel economic and financial system has arisen since last July, one which certainly is not without its problems, but has an entirely different orientation; and indeed, is based on the future, and on human creativity. 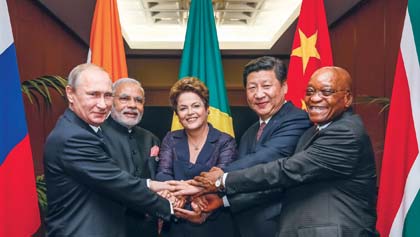 is from the Fortaleza Summit of the BRICS nations in Brazil last year; and you see, standing next to President Putin, Narendra Modi, the Prime Minister of India. He said: The BRICS are the first alliance in the history of mankind which is defined not on the basis of present capacities, but by the future potential of all these nations.

Through the initiatives of Chinese President Xi Jinping, in particular, the New Silk Road and the Maritime Silk Road of the 21st Century form the framework of a new economic and financial system which is rapidly developing.

This includes, above all, a new financial system. It consists in the Asian Infrastructure Investment Bank, the New Development Bank, the Bank of the Shanghai Cooperation Organization, the bank of the SAARC nations, the New Silk Road Development Fund, and the Maritime Silk Road Fund. These banks represent a fundamental break with the casino economy of Wall Street and the City of London, because these banks are oriented exclusively to the development of the real economy, of the economic infrastructure and common welfare of their nations.

Xi Jinping has emphasized repeatedly: The new financial architecture is in no way a Chinese imperial competitor to the American imperial structure, but an inclusive concept in which all nations are to collaborate—America, the Europeans. This is a "win-win idea," for the mutual advantage of all who take part.

I say to you that our future existence as a human race, depends on succeeding in winning over America and Europe to cooperation with these BRICS nations.

Now some in Russia fear that China is too influential in this development, because, of course, it has had a huge economic development over the last 30 years. But I would like to demonstrate briefly that Russia has also played a major role, in the sphere of ideas, in bringing this new model into being.

The Future of Eurasia 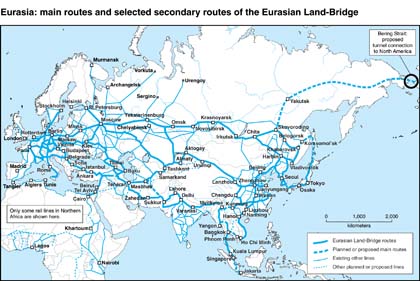 is a plan for the Eurasian Land-Bridge, which we—the Schiller Institute—proposed in 1991 after the Soviet Union had broken up, and which was conceived as a strategy for peace in the 21st Century, in which infrastructure corridors from Europe to Asia would be built.

As you know, this was not realized, because at that time, Margaret Thatcher and Bush Sr. wanted to reduce Russia from a superpower to a raw-materials-producing country, in which shock therapy was applied.

But Lyndon LaRouche—my husband—and I were often in Russia, and presented these ideas. This: 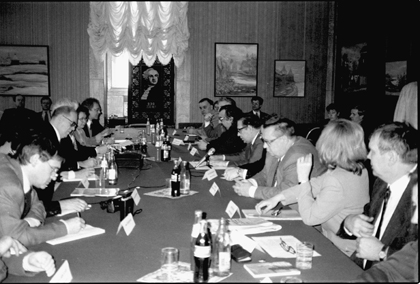 was a forum in 1995 with the former Soviet Premier [Valentin] Pavlov and the economists [Gennadi] Osipov and [Leonid] Abalkin.

This is a report on the Eurasian Land-Bridge, written by the Academician [Alexander] Miasnikov—this was in 1997—and Russian economists were already discussing this concept in 1997. 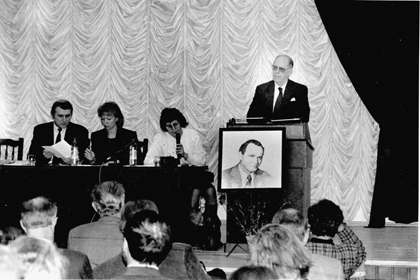 was a 2001 conference in honor of Pobisk Kuznetzov, and this was focused on why the ideas of Vladimir Vernadsky must dominate the Eurasian order of the future.

This is Academician Alexander Granberg: 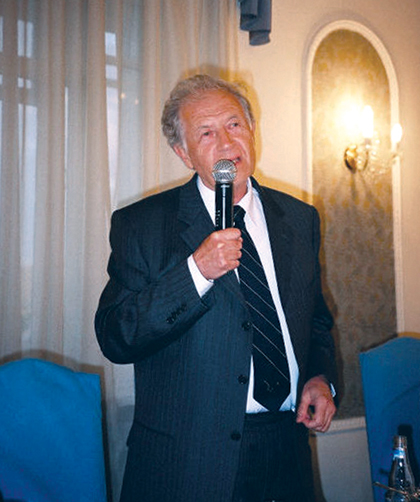 the father of the Bering Strait Crossing. That is the idea of connecting the Eurasian Landbridge with Alaska by a tunnel under the Bering Strait. It is important for the development of the Russian Far East, where the world's greatest reserves of raw materials lie under permafrost, untapped; and it is necessary to create conditions under which people who work there may also live there.

Thus, for example, such an Arctic city—Umka—has been planned as a model, 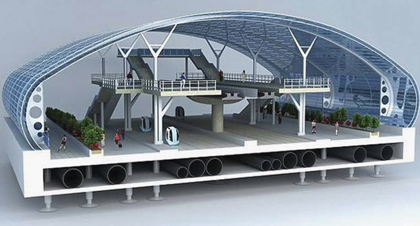 and this is also a step toward development in space. For these domed cities in Siberia can also be the model for domed cities on the Moon, or later on other bodies of the Solar System.

[Deputy Prime Minister] Dmitri Rogozin has said, precisely on this point, that the BRICS nations are all spacefaring and cosmic nations, and therefore the future of humanity will be determined very powerfully by knowledge of the Solar System and of our galaxy.

Here you see an image 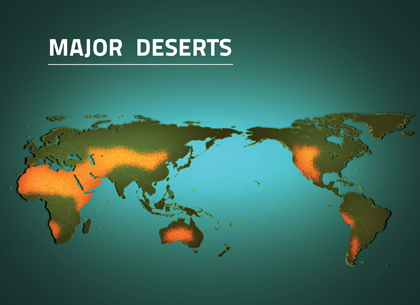 of the deserts which are now spreading extremely quickly across the world, all the way from the Atlantic Coast of Africa to China, and of course in California and the American West.

The oligarchical model—the system that I described at the outset—speculates on water becoming constantly more scarce and being privatized, and that the greatest possible profits are to be made on scarce water. Wall Street has been buying up, during the past decade, everything having to do with water, worldwide: lakes, aquifers, water treatment chemicals, absolutely everything.

China, on the other hand, is the only country which has carried out large-scale water management programs: the Three Gorges Dam, which now generates 22.5 GW of hydropower, and which has saved the lives of many human beings; and the bringing of water from its source in the Yangtze Kiang to the North, which is desert.

But to really increase the scarce water supplies available to mankind, we must make use of events in the galaxy and the Solar System in order to produce more water. Here you see

a representation of the 32 million-year periods in which our Solar System undergoes a cyclical motion, moving above and below the plane of the Milky Way. This has an enormous effect on the cosmic radiation, which leads to cloud formation, and which causes all precipitation by ionization of the moisture in the atmosphere. The conquest of space will also be enormously important in the future, for the conquest of problems on Earth.

In fact, the New Silk Road will conclude the last phase of infrastructure development on our planet, and the next phase will be the development of near-Earth space. And just as the old Silk Road brought economic welfare and exchange of culture and technology to all the populations along it, so the New Silk Road and the World Land-Bridge will have the same beneficial effect in enabling peoples to live together in harmony.d 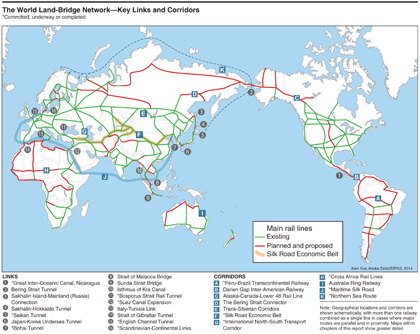 You see here the projects which will be combined in the World Land-Bridge, as a single international community. And the new economic order which will arise, will be determined— must be determined—by Vladimir Vernadsky's idea of the Noösphere, that realm in which the intellectual power and activity of human beings increasingly dominate the pure biosphere; that is, in which the human race truly develops toward reason. That is the precondition for our survival as the human race, as the creative species.

Here is an representation 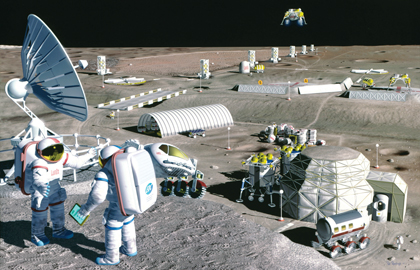 of a future Moon colony. China is working on this in order to release helium-3 from the Moon surface, for the future nuclear fusion economy on Earth. Once we achieve nuclear fusion, we have energy security—because the helium-3 on the Moon will suffice for some 10,000 years—and raw materials security, because we will then be able to convert raw materials by the fusion torch method to their ions, from which new raw materials can then be composed.

The employment of human creativity is all-important, because everything depends on whether we make the leap from a human race mostly still imprisoned in oligarchical thinking—greed, monetarism, desire for possessions—and change our identity to that of a creative humanity.

Human beings are the only creatures which are capable of constantly new thoughts, never thought before, which can redefine the identity of the human race in the cosmos. And that is the precondition for our being able to overcome our present dangers. I will be very grateful if you will concern yourselves with this question of creativity, because all of our lives depend upon it.