Now Is the Winter of Our Discontent:
What To Expect from the New German Government 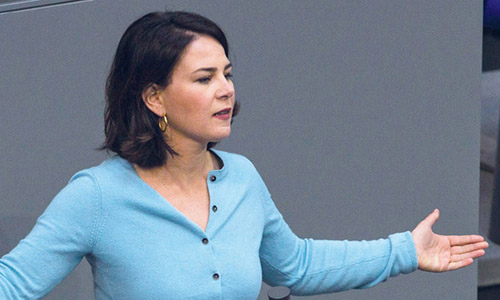 CC/Olaf Kosinsky
Bundestag Members and co-leaders of the Alliance 90/The Greens, Annalena Baerbock (above) and Robert Habeck (below). She espouses a suicidal “tough course against Russia and China,” while he, who is expected to become Minister of Economics, Energy and Climate, has promised to put Germany on a suicidal “path of 1.5 degrees.”
View full size 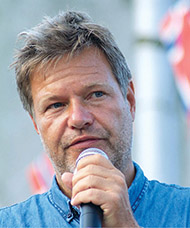 Dec. 2—The rude awakening from the illusory world of non-issues, into which German voters were carefully lulled by the politicians and the media during the recent federal election campaign, will not be long in coming. Foreign policy played just as little a role in the election campaign and talk shows as did the world famine, NATO’s defeat of the century in Afghanistan, the global implications of the pandemic, or hyperinflation. The new government, however, will be faced with all these out-of-control crises—crises that will not concern themselves with “narratives” or the coalition agreement.

Now, in the midst of a highly dangerous strategic confrontation between NATO and Russia, and between the USA and China over Taiwan, we have a foreign minister beyond the wildest expectations of Washington and London—let’s see whether Germany will survive. Green Party leader Annalena Baerbock had already pled “for a tough course against Russia and China” in April, a position which future Minister of Economics Robert Habeck unmistakably supported when he visited Ukraine in May, wearing NATO camouflage clothing, and called for arms to be delivered to the Ukrainian armed forces.

In the meantime, the U.S. administration’s open course of confrontation against Russia through an escalating series of provocations in Ukraine and the Black Sea by NATO, and U.S. military operations against China through undisguised support for Taiwan’s potential independence from China, has entered an extremely dangerous phase. Even apparently contrary signals from President Joe Biden in his summit talks with Presidents Vladimir Putin and Xi Jinping do not change anything significantly, because despite positive indications, opposing actions by the State Department or the Pentagon immediately follow, which raise the question of who is actually making policy. 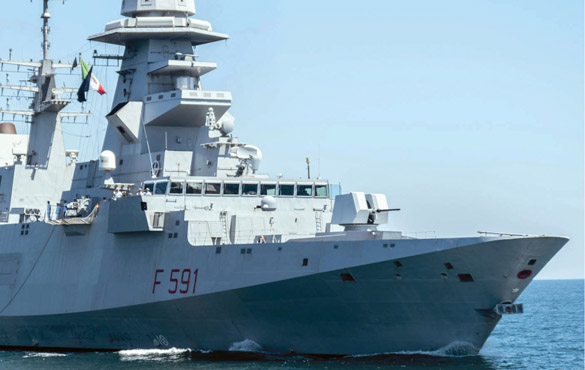 NATO
Navy Admiral Charles A. Richard, commander of the U.S. Strategic Command (below), has instructed the Pentagon to re-classify the use of nuclear weapons from “not likely,” to “likely,” pressuring Germany to suicidally “share” in their basing and use. Meanwhile, NATO pursues increasingly aggressive provocations. Above, a Guided Missile Frigate in a NATO Black Sea exercise, July 16, 2021.
View full size 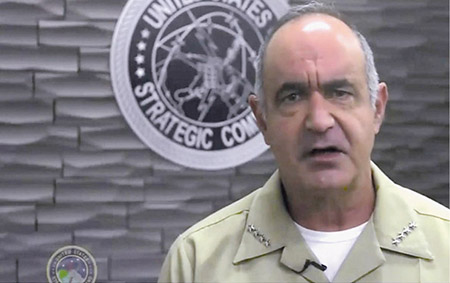 In view of the astonishing lack of discussion over public statements by Admiral [Charles] Richard, the commander of the U.S. Strategic Command, in which he instructed the Pentagon to classify the use of nuclear weapons as “likely,” the relevant statements in the coalition agreement (that Germany will continue to participate in “nuclear sharing”) are practically an obligation to participate in the use of nuclear weapons in an emergency. Anyone can work out what this would mean for Germany’s existence.

Regarding the financing of the new government’s plans, even neoliberal economists such as Michael Hüther from the German Economic Institute (Institut der deutschen Wirtschaft, IW) or Marcel Fratzscher from the German Institute for Economic Research (Deutsches Institut für Wirtschaftsforschung, DIW Berlin) have considerable doubts. However, these only relate to the coalition compromise which, with the rejection of tax increases, the debt brake, and massive new investments, has turned into a grab-bag full of surprises.

The actual context, however, in which the concept of the “traffic light coalition” [so called because of the traditional colors of the SPD, FDP, and Green parties, respectively red, yellow, and green—ed.] must be seen, is the clear tendency towards hyperinflation, which in the meantime affects not only a large part of raw materials and energy, but also food. According to the FAO [the UN’s Food and Agricultural Organization—ed.] food price index, as early as October, food had reached a price increase of 31% on an annual basis. Even the U.S. Federal Reserve has now given up its absurd characterization that it is a matter of “transitory hyperinflation.”

In reality, hyperinflation is the expression of the systemic collapse of the neoliberal system, which for decades relied on monetary gains instead of physical production, and thus on the speculative profit of the “higher earners.” And now—what an irony of fate—the two parties, namely, the Greens and the FDP, whose members are among the highest earners in Germany, are faced with the long-term consequences and with it with the failure of this economic model, just at the moment when they finally made it into government responsibility.

The policy agreed upon by the international financial oligarchy of the City of London, Wall Street and Frankfurt, namely “shifting the trillions”—the decarbonizing of the economy, either under the terms Green New Deal (U.S.A.) or Green Deal (EU)—is the futile attempt to help a thoroughly bankrupt financial system into a further boom with enormous financial injections—this time through the enormous investments of approx. $60 trillion into green technologies during the next few years.

With the simultaneous abandonment of nuclear energy, as in Germany, the exit from fossil fuels and the associated exit from energy-dense forms of production will lead to the destruction of Germany as an industrial nation. At the same time, since speculation is prioritized instead of relying on energy security, the price explosion in the energy sector will spread very quickly to the entire economy. Instead of accepting Putin’s offer for long-term supply contracts and increased deliveries and thus curbing the greed of speculators in the spot markets, it is better to keep your fingers in the honey pot, even if that means sawing off the branch you are sitting on. In view of the hyperinflation, wanting to cover part of the old-age pension with the so-called “defined contribution pension” can only be seen as negligent gamble on securing the life of old people with low incomes. 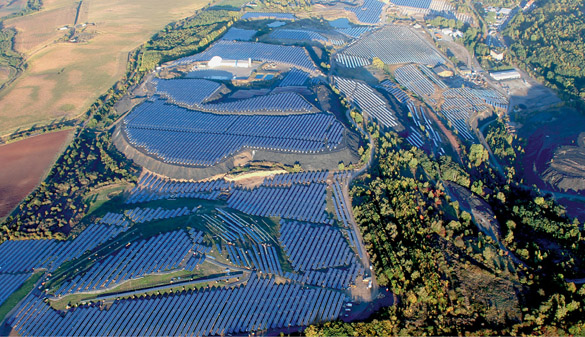 CC/Parabel GmbH
Solar “parks” and wind “farms” increasingly dominate the landscape of a rapidly greening (deindustrializing and depopulating) Germany. Above, the Krughütte Solar Park. Below, a wind farm in Panketal.
View full size 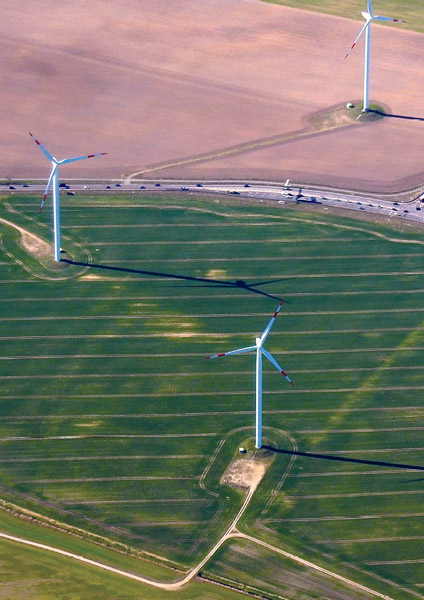 So the new government will not oppose the EU’s efforts to squander trillions; its foreign policy will be “in sync” with the Biden Administration; it will strongly coordinate its China and Russia policy with the United States; and it will pursue, as Cathryn Clüver Ashbrook, Director of the German Council on Foreign Relations (DGAP) thinks, a “feminist” foreign policy, which means, among other things, to also take into account the “fate of endangered groups in countries of operations” when the Bundeswehr [Germany’s unified armed forces—ed.] is deployed abroad. This obviously means the continuation of the “humanitarian” wars of intervention, although this policy, which criminally disregards the UN Charter and the principle of sovereignty, has just crashed in Afghanistan.

If this “traffic light coalition” really wanted to take care of the fate of endangered groups there, after Germany and NATO left a totally destroyed country in Afghanistan after 20 years of war, then they would take care of the 93% of the population there who are acutely starving, at risk of freezing, and lack any medical care. But so far there has been just as little to hear from the traffic lights on this topic as about serious plans to save the health system in Germany, which is about to collapse. 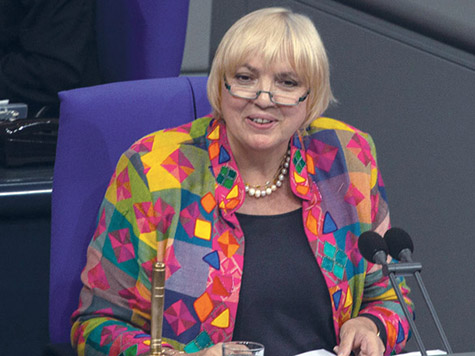 CC/Olaf Kosinsky
Claudia Roth, Member of the Bundestag, expected to become Minister of Culture in the new government.

Now Claudia Roth will become Minister of State for Culture in the new government. In the coalition agreement it says: “We are setting up a central contact point called ‘Green Culture’ that offers skills, knowledge, data acquisition, advice and resources for ecological transformation. We are creating a competence center for digital culture that advises, networks and qualifies cultural actors.” “Green Culture” will thus subordinate the entire cultural sector to the eco-dictatorship, i.e., determine what is promoted and recognized as art at all.

So, it is of course fitting that the traffic light coalition has already agreed on the legalization of cannabis, despite the chilling experience with drug legalization in Holland and the fact that legalization in the U.S.A. has so dramatically increased the drug market, that death by overdose is now one of the ten most common causes of death, with over 100,000 deaths per year.

Unfortunately, it is to be feared that this “green culture” is exactly the opposite of what Germany would need most in these difficult times, namely a return to our great classical culture, from which alone the strength for a cultural renaissance can come. This “traffic light” government also sheds light on a fundamental flaw in the parliamentary electoral system. Because it doesn’t matter whether someone has chosen the FDP for liberal reasons, the Greens for ecological reasons or the SPD for social reasons; all the supposedly so-different positions are now mixed in a single cocktail that not everyone will like.

So, what is left for citizens who have either not chosen the traffic light or have not clearly considered the implications of the policies it advocates?

The most important thing will be that the citizens develop into real citizens, something that was already lacking in Germany in Heinrich Heine’s time—1797-1856—that is, people who are so professionally qualified in the most important fields of politics that they could step into the office of Federal Chancellor or Minister, because they put the common good first. (So different than now with the Greens, where Cem Özdemir quickly becomes Minister of Agriculture because all the other posts were already taken.)

During the next few months, which will bring a spiral of economic collapse, hyperinflation, pandemic consequences, and strategic crises, it will be important to build an international anti-Malthusian partnership that works together to find solutions so that humanity can survive it all. The serious construction of a modern health system in every single country on earth, without which the pandemic cannot be overcome, must be the first step.

Therefore, become a member of the Schiller Institute now! 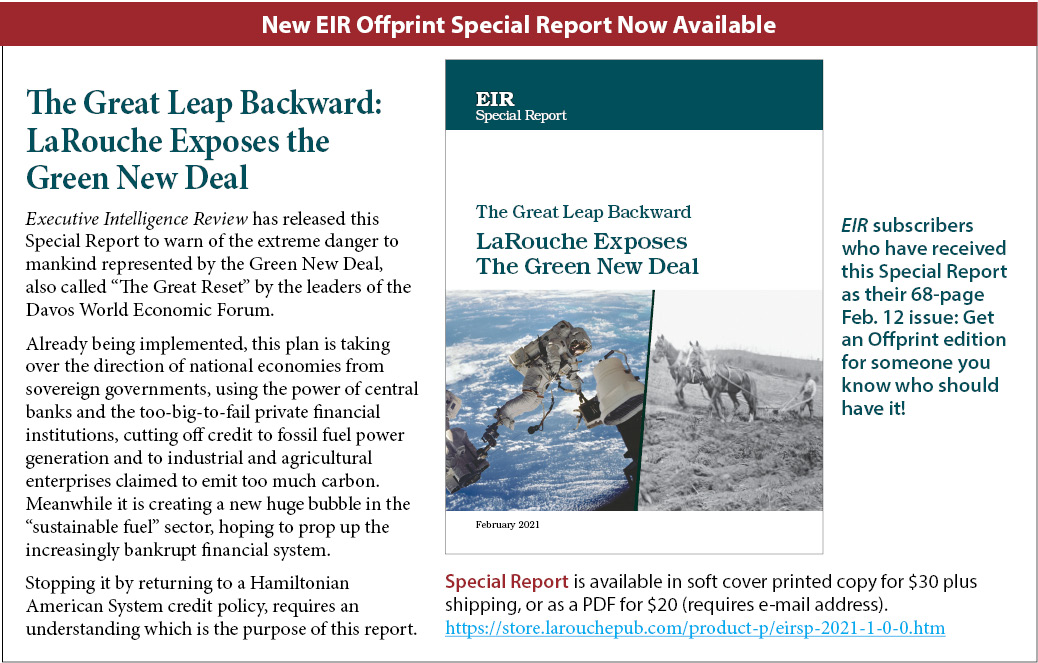