This is an edited transcript of the remarks given by Helga Zepp-LaRouche and Daud Azimi to the Development Panel of the Schiller Institute’s April 9, 2022 conference, “To Establish a New Security and Development Architecture for All Nations.” Mrs. Zepp-LaRouche is the founder of the Schiller Institute. Daud Azimi, Dipl. Ing., is a Board Member of the Peace National Front of Afghanistan. He spoke in German, with simultaneous translation into English. 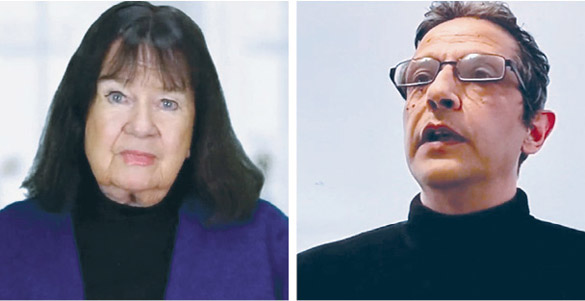 Let me just briefly make some remarks about Operation Ibn Sina. The way this came about is that when NATO left Afghanistan in a hurry in August of last year, everybody knew that 80% of the budget of Afghanistan had come from so-called donor countries through aid. When the Taliban took over, that aid was immediately cut. What was destroyed in the stroke of a pen, was almost the entire financial means of the nation. The central bank was closing; there was no money in the banks; people could not even send money into Afghanistan. The country plunged into complete chaos; it was in a poor condition before.

It turned out that in 20 years of NATO war fighting, nothing was built up in terms of the economy. Maybe some schools and some roads were built, but not a functioning economy. Then, on top of it, the U.S. and European central banks froze—this is a nice way of putting it—froze $9 billion belonging to the Afghan people.

That money was stolen, sort of. And the situation became dramatically worse very rapidly. In a few weeks it become clear that 23 million people were in danger of not making it through the winter, of starving to death. Of the entire Afghan population, 98% had not enough to eat, were food insecure. I think 7 million children, all together, were in grave danger. Nobody knows how many of those have died in the meantime.

So, it was an absolute catastrophe. Have you heard anything about that in the media? Compare the coverage about Ukraine, as horrible as the situation there is, compare that to the coverage about Afghanistan where more than 50% of the people were, and many still are, in mortal danger. At that point, I called for Operation Ibn Sina. The idea was to first sound the alarm to the world population that there must be immediate humanitarian aid. In the meantime, many international organizations are there. But more importantly, you had to build up the economy, to build infrastructure, to build agriculture, industry; to stop the poppy opium production.

In the meantime, a lot has been done. The Taliban, not to our surprise, but to the surprise of many, suspended all opium production. But the country is still in utter need.

So, I called for Operation Ibn Sina. Ibn Sina was one of the great physicians of all of mankind. He lived from 980 to 1037—about 1,000 years ago. He was one of the greatest physicians of all of mankind. He wrote a canon of medicine, which was the standard medical book even in Europe until the 17th and 18th centuries. He discovered the importance of quarantine to fight epidemics, which is extremely important in the context of the COVID-19 pandemic. So, I called the effort to save Afghanistan, Operation Ibn Sina.

Ibn Sina’s father came from Balkh, in northern Afghanistan. He himself was born in Afshana, which today is now Uzbekistan, and is a great hero and great inspiration for the entire region, but especially for Afghanistan.

I said, in a pandemic, you have to build a modern health system, and the health system—modern hospitals and so forth—can only be built if you have clean water, enough electricity, other basic infrastructure. So, I’m still fighting for this idea.

I should also say that Ibn Sina was also a great philosopher; he discovered extremely important conceptions like a proof about the immortality of the soul. I can only inspire you to study that, because it is an important idea. He discussed the question about the eternity of the universe; this is also extremely important. Did the universe start with a Big Bang, or was there something before? In other words, he formulated scientific questions which are still extremely relevant today. The James Webb Space Telescope will soon give some answers to this question.

He also was very famous in Europe. He influenced European philosophy—Thomas Aquinas, Dante, Cusa, Marsilio Ficino, and many others. He has always been regarded as one of the towering giants of universal history.

I thought that giving the effort to save Afghanistan the name of such a great physician and philosopher was also important, because when a country is going through Hell—and Afghanistan has been going through Hell—you need an inspiration connecting with the greatest traditions of the past, but also with the idea of a hope for a much better future. This region of the world was once known as the Land of the Thousand Cities. Hopefully, when the reconstruction of Afghanistan occurs—and there are some hopeful signs that it will happen in the context of the Belt and Road Initiative—you need an optimistic idea about a better humanity. Ibn Sina is exactly the best possible image; especially because of this dual character of medicine and philosophy.

In the meantime, some positive developments have happened. Unfortunately, not from the West, not from the United States, not from Europe, all the countries who were there with NATO for 20 years, essentially did very little if anything. But in the meantime, there were two important conferences. One was the OIC—the Organization of Islamic Cooperation—conference in Islamabad. They created a humanitarian fund for the development of Afghanistan.

And a few weeks ago, there was another conference in Anhui. This is a very beautiful province of China, where the neighbor countries met together with [Chinese Foreign Minister] Wang Yi and others to discuss a regional development perspective for Afghanistan. So, there is some hope that things are moving. But the situation is still absolutely dramatic, and we should not fool ourselves about that.

I wanted to tell you about Operation Ibn Sina, because, while it is very difficult to win support for it, I have not given up. And I have some collaborators who also have not given up on the idea that this must be put on the agenda for the better future of the Afghan people. So these are my short, introductory remarks to Daud Azimi, who will tell you some more.

The Schiller Institute has convened this conference at a very opportune time because on the one hand, the global situation has changed, and on the other hand, developments in Afghanistan have great impact on our region and the world.

Ladies and gentlemen, the current world is a hotbed of conflicts that cannot be ignored. Some have resorted to violence and others have tried to resolve them through peace and diplomacy. There is a need for a new global practical theory based on common aspirations to create a global platform for peaceful cooperation.

It is good that the Schiller Institute organized this conference, because as a political organization working on the issues, the PNF is also working tirelessly for the peace of Afghanistan and we have established a larger network in the USA, Europe, and in Afghanistan.

We have also written useful scientific research materials and held various conferences in the USA, Frankfurt am Main, Kabul, and submitted our proposals to the Islamic Emirates of Afghanistan through our members Prof. Abdul Satar Sirat and Mr. Zarghoon Shah Shinwari.

Dear participants, we would like to draw your attention to two themes of this conference: First, today’s Afghanistan and its new geographical and political situation; and second, the urgent economic and political needs of Afghanistan today.

Afghanistan has become a battleground of regional rivalry after the withdrawal of NATO forces. The war in Afghanistan has paved the way for foreign rivalries in Afghanistan’s multi-ethnic traditional religious community. Ethnic, religious, and xenophobic conflicts have left the country torn and covered in blood. Afghanistan is described by some as a haven for terrorists. There is a clash of foreign conflicts and the lack of an appropriate practical common policy to protect them from the conflict.

Under no circumstances should the experience of bloodshed be repeated. Conferences like this one should focus on the changed political situation of Afghanistan and work on the policy of peace and friendship instead of war and competition. On this complex issue, the Peace National Front of Afghanistan is working to maintain neutrality and consolidate peace. This conflict has brought people to the brink of hunger and malnutrition. It is true that some international charities are helping these people. These donations are useful, but not enough. Sustainable projects need to be supported.

If the Schiller Institute or any prestigious international organization wants to hold a big conference to support the recovery of Afghanistan, the Peace National Front of Afghanistan can help the process with useful experience and ideas from economic experts.

The first great political need of the Afghan people is the formation of a government in Afghanistan that corresponds to their forced geographical location, multi-ethnic structure, national characteristics, religious and cultural values, and to preserve national independence and neutrality. I am personally of the opinion that the current political and economic situation in Afghanistan should be further supported in order to achieve a long-term peace.

Finally, I would like to thank the Schiller Institute for making it possible for us, the Central Council of the Peace National Front of Afghanistan, to participate in this conference and hope for further cooperation in the future.