This statement was circulated as a leaflet, being part of Lyndon LaRouche’s forecast and warning of what soon became 9/11/2001. He had earlier warned explicitly of a “Reichstag Fire” terrorist incident, which would be used to enable George W. Bush and Dick Cheney to establish emergency rule, i.e. dictatorship, just as Hitler used the hoked-up attempt to set fire to the German parliament in 1933. Today, the same Jacobin forces of 2001 are being deployed to aid an attempted coup against a legitimately elected President. But the resonance is extraordinary.

All reports from reliable sources indicate that the international terrorist movement which surfaced at Seattle, mobilized itself at Porto Alegre, Brazil, and created bloody violence at Genoa, Italy, is now taking aim at the U.S. nation’s capital, Washington, D.C. It is extremely important that those elements of U.S. organized labor who have permitted their organizations to be entangled in sympathy for this terrorist gang, break openly from the operations already being prepared for the terrorist-style riots now aimed at both the District of Columbia and areas of the adjoining states.

Two leading points are to be made about that present new wave of international terrorism.

First, the hard core of the organizers of the present terrorist operations represent the fourth generation of a series which began its existence as an organized international movement of terrorism, during the middle-to-late 1960s, the anti-nuclear terrorist rampage of the late 1970s, and the terrorist wave of the mid-1980s. As typified by the case of Tony Negri, and the role of the Basque terrorist organization ETA, there is no break in the continuity of the hard-core leadership of these terrorist forces over the period from its exploitation of the anti-Vietnam War setting of the late 1960s, to the present day.

Second, to understand the very high level of control over and backing of these terrorist actions, even from high-level circles in governments, we must think back to the Jacobin Terror first launched from Jeremy Bentham’s London on July 14, 1789. For this occasion, facing some well-documented facts from real history, in place of the usual university textbook fairytales, will be most helpful in assisting relevant authorities to defend the security of Washington, D.C. and its environs.

Why the Bastille Was Stormed

With the victory over the British monarchy, by the allied U.S. and French forces at Yorktown, the danger most feared by that monarchy and its anti-republican sympathizers, such as the Physiocrats and the Duke of Orlea@aans, in France, was the fear that France would adopt a constitutional reform of its monarchy based upon the same principles expressed by the U.S. Declaration of Independence and 1787 draft of the U.S. Federal Constitution. The orchestration of the storming of the Bastille, on July 14, 1789, was the detonator for a coup d’état which suppressed the constitution adopted under the leadership of Lafayette and Jean Sylvain Bailly.

At the moment that coup occurred, the only prisoners remaining in the Bastille were a few mental cases, held while awaiting their transfer to mental institutions. The mob which assembled before the Bastille was organized and armed by Benjamin Franklin’s old adversary, the Duke of Orleans, and was staged by the Duke on behalf of a political campaign to have the father of the notorious Madame de Staël, former French finance minister and Swiss banker Jacques Necker, appointed as Prime Minister of France. 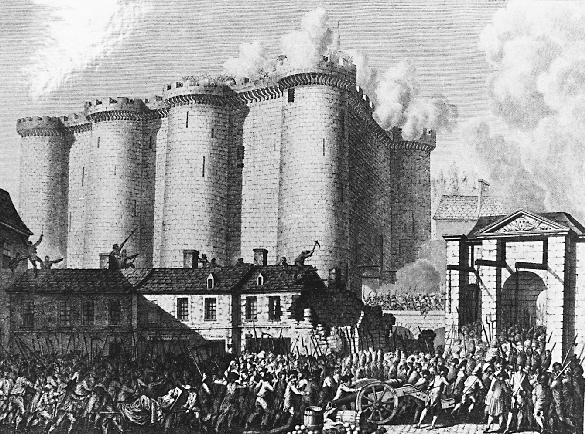 Pierre Gabriel Berthault, 1800
To understand the high level of control over today’s terrorist actions, think back to the Jacobin Terror launched from Jeremy Bentham’s London, with the storming of the Bastille in Paris on July 14, 1789. Below, Black Bloc anarchists hurl stones and tear gas canisters back at the police in Genoa, during the G8 Summit in Genoa, in July 2001. 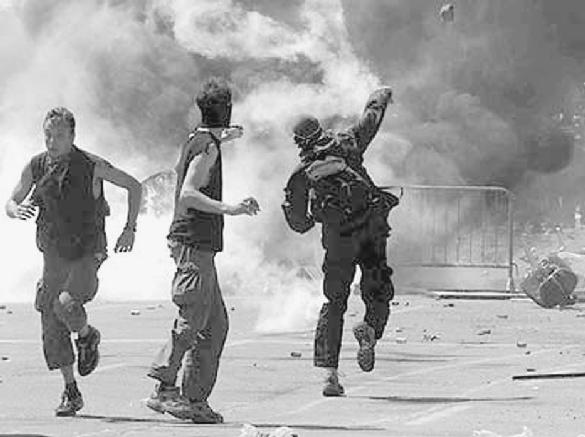 On orders from the backers of the Duke’s plot, the commander of the Bastille fired upon the mob organized by the Duke. In due course, the prison guards surrendered, ostensibly confident that since they were tools of the Duke, he would arrange for their secure passage. To silence the tongues of those guards, the mob removed the guards’ heads. At that point, the mob moved off, bearing the poor babbling lunatics on the shoulders of those at the head of this procession, carrying the heads of the decapitated guards on pikes, and bearing a bust of Jacques Necker, their candidate for Prime Minister, at the head of the procession.

Bailly, the co-leader of the adoption of the constitution, was killed on the initiative of the terrorist Marat, who, together with the terrorist Danton, had been personally housed and trained by the British Foreign Office’s Jeremy Bentham, in London, and dispatched to France to make the speeches and implement the policies of that British Foreign Office “secret committee” then directed by Bentham. Lafayette was sent into an Austrian dungeon at Olmütz, on orders from London. The hope of a France with a durable quality of republican constitution, matching that drafted under the leadership of Bailly and Lafayette, had to wait until the defeat of Napoleon III, and, such notable subsequent achievements as the constitution of the Fifth Republic under President Charles de Gaulle.

The role of the British monarchy and its French Physiocratic and other accomplices, in orchestrating the 1783-1794 crisis in France, has many precedents in earlier history, back to the infamous role of the cult of Dionysus in ancient times. Also, we should not forget, the way the Balkan wars were orchestrated to bring about World War I, or the way in which irregular warfare was used by the opposing NATO and Soviet powers during the time leading into the break-up of the Warsaw Pact. As I emphasized, in endorsing, in 1986, the importance of Professor Friedrich Freiherr von der Heydte’s book Modern Irregular Warfare (Der Moderne Kleinkrieg, 1972), a vast repertoire of methods of “irregular warfare,” including assassinations and allegedly spontaneous terrorism, are standard practices for “warfare conducted by other means.”

This was the case of the terrorist facets of the civil disturbances of the 1960s, 1970s, 1980s, and again, as at Seattle, Genoa, and threatening Washington, today.

War in a Financial Collapse

The world is presently gripped by the biggest, most deep-going, most deadly financial and monetary crisis since Europe of the middle to late Fourteenth Century. We are in a period in which economic and related circumstances have made the idea of regular modern warfare a sick joke, in which regional and other “little wars,” terrorism, political assassinations, and other forms of destabilization, are leading items on the agendas of many of the strategic planners. The financial and monetary crisis in its presently advanced stage, drives desperate political forces to the brink, desperate political forces who would rather drive civilization itself to the brink, than tolerate the changes in financial and monetary institutions which the present crisis-situation demands.

Washington, D.C. has become a very shabby sort of world power, but it is still the leading world power. Any movement which would terrify official Washington and its environs into fleeing under its beds, would be a major strategic threat to the peace of the world at large, just as the Jacobin Terror of 1789-94 led fatefully to those Napoleonic wars which dominated Europe until the conclusion of that Vienna Congress which sowed the seeds of the later catastrophes to come.

Please Do Not Be Just Another Fool!

The reason many trade-unionists, for example, have allowed themselves to play the fool in the matter of the continuity of the Seattle, Genoa, and projected Washington D.C. terrorist riots, is their affliction with the mental disease known as “single-issuism.” I refer to the same lunacy which prompts a crazed individual to conduct a terrorist form of attack on an abortion clinic. The mental disorder in such cases, springs from the folly of not fighting for positive solutions, rather than purely negative protest against some isolated aspect of the total situation to be faced.

As I have taught on all relevant occasions, whether in physical science, in economics, or in personal life, the word “principle” should never be used to express anything but the equivalent of a universal physical principle. The only thing really worth fighting for, is the outcome of your having lived, your nation having existed in your lifetime. What is important is what we transmit to become the reality of the generations yet unborn. In what we do to that effect, lies our true personal identity, our only fundamental issue of universal principle.

The most depraved of all “single-issue” politics and other tactics, is the brainless practice of making an alliance with the devil himself, if the devil is doing something unpleasant to someone we have identified as an enemy of the moment.

I pick on trade-unionists, only to illustrate the same point which could be made for many other parts of society.

Some trade-unionists rationalize their toleration of the terrorists because of an argument which runs more or less as follows: 1.) The North American Free Trade Agreement (NAFTA) and other forms of globalization are robbing American working people of their jobs and income. 2.) The terrorists who surfaced at Seattle, Teddy Goldsmith’s Porto Alegre conference, and the Genoa riots, “say they are fighting against globalization.” 3.) Those terrorists are part of a very big and powerful movement. 4.) Therefore we should sympathize with them, even condone our union’s working with them.

Fact: 1.) The most passionate supporter of NAFTA inside the leadership of the Democratic Party was the same Vice-President Al Gore who attacked Malaysia’s Prime Minister Mahathir bin Mohamed savagely, at Kuala Lumpur, as part of Gore’s defense of both super-globalizer George Soros and total globalization of the international market. 2.) Therefore, the AFL-CIO supported Al Gore’s pre-candidacy for President of the U.S.!

Eugene V. Debs was not so foolish as those AFL-CIO leaders of 1999-2001. He warned: It is better to vote for what you want, and lose, than vote for what you do not want, and win. In the case of Al Gore, the AFL-CIO voted for what it did not want, Al Gore’s pro-globalization policy, and won Gore’s nomination. But, in so doing, they betrayed everything which their grandchildren would have considered a decent outcome of that campaign. They voted for Gore and won globalization. As a result, they could lose everything.

What opportunistic trade-union leaders overlook, is that the intention behind those high-level circles backing the deployment of terrorists into Seattle, Genoa, and Washington, is to provoke the establishment of something like a fascist police-state rule in the U.S.A. and elsewhere. We know what happens to trade-union interests under such circumstances.

The only sane standard for political and related behavior, is to adopt an intention whose result will not be something of which your great-grandchildren should be ashamed, but of which they should be proud. Labor and others should pull out all support from the intended terrorist deployment into Washington, D.C.