This article appears in the January 28, 2022 issue of Executive Intelligence Review.

Mr. LaRouche, on September 21, 2005, issued a warning of the expanding commodities bubble, “Hyperinflationary Patterns: Inflation Runs Wild!” published in EIR on September 30, 2005. He wrote, “The world is presently gripped by a hyperinflationary wave-front of a Riemannian type,” providing a graphic depicting the “hedge fund-driven shock wave” of inflation propagating into the entire economy. He briefed an Internet-radio audience that same day on how government can and must deal with such a growing threat. Excerpts from that live interview titled, “Government Can Control Today’s Hyperinflation,” were published in the same issue of EIR. Government did not act. The banks crashed three years later.

The fakery of the outgoing Alan Greenspan administration, in burying the “M3” report, was clearly intended to conceal the fact that the rate of rate of increase of world prices of primary materials has the world as a whole currently on the same kind of “least-action pathway” curve of hyperinflation which gripped Weimar Germany during the second half of the year 1923 (Figure 1).

Comparing the present rates of rates of increase of primary materials prices with the pattern for Germany 1923, indicates the likelihood that, under present U.S. and European policies, the world system could reach a point of collapse of the monetary system by not much later than September 2006, if not earlier.

Under the present trends in policy-making in the U.S. government, both in the careening economic-financial lunacy of the current Bush Administration, but also the “Alfred E. Newman”-like diffidence of a negligent U.S. Congressional fraction of the Democratic Party, the likelihood is that the world system as a whole will be in a U.S.-dollar-triggered collapse-phase before Autumn.

The point is not to predict what could happen by Autumn; the point is to kick the relevant political circles in the Democratic Party with the proverbial two-by-four prescribed for reluctant donkeys, and to do so hard enough, soon enough, and often enough, to move to the kind of emergency reform of U.S. policy which could stave off an otherwise onrushing general breakdown-crisis of not only the U.S. system, but the world system as well.

There is a relative handful of persons, typified by the Brookings Institution-based Hamilton Project team, who are capable of understanding this, and who already have command of most of the essential facts to be considered. There are professionals in other parts of the world, who could begin to understand this quickly, if they were kicked hard enough to come to the necessary state of wakefulness. 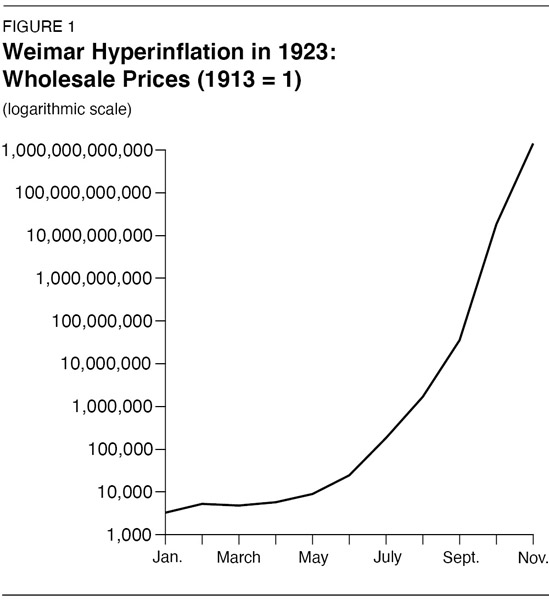 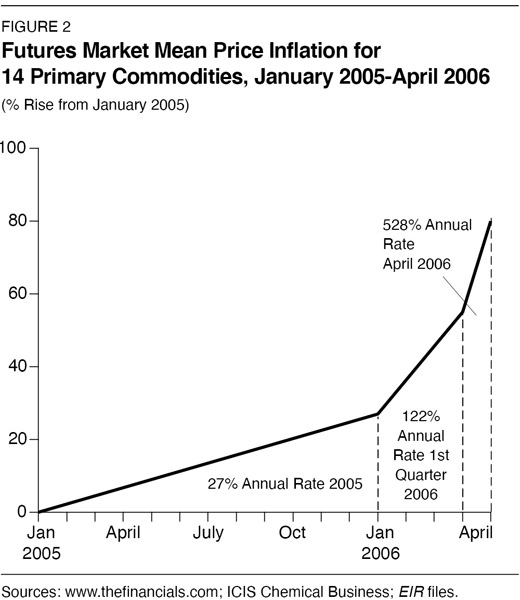 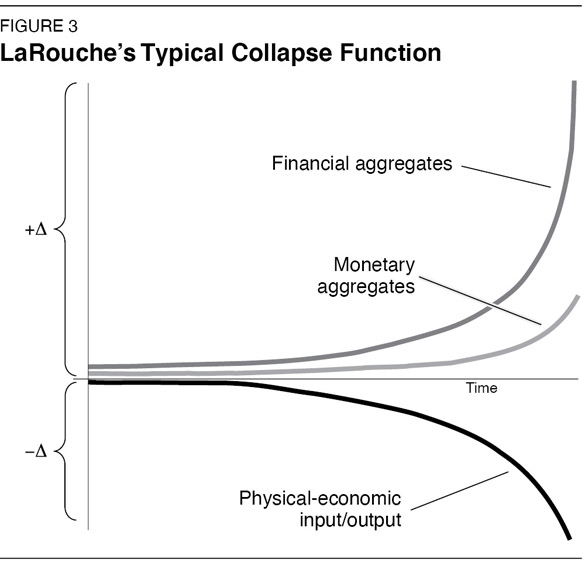 The world is thus, now, in the terminal phase of a hyperinflationary collapse of not only the dollar-system, but the world-system as a whole. To bring this into focus, consider the elementary features of the way in which Federal Reserve Chairman Greenspan’s lunacy orchestrated the 1987-2006 phase of the relevant hyperinflationary cycle. Keep three illustrative curves in view: 1.) my “Triple Curve,” which, since January 1996, has described the general characteristics of the ongoing collapse-function of the 1995-1996 interval (Figures 3-4). The curve of 1923 Weimar, Germany hyperinflation (Figure 1); and, 3.) The current hyperinflationary rate of rate of increase of primary commodity prices, as led by petroleum and metals (Figures 2 and 5).

(Leave the “supply-and-demand” freaks, and other statisticians from Swift’s Island of Laputa, to play with themselves behind the barn, where they will be happy.)

Essentially, what Greenspan did, was to bail out the banks whose coffers had been emptied by the events of October 1987, by laundering the mortgage-based securities packages of Fannie Mae and Freddie Mac. The real estate bubble was built up to its presently cancerous proportions for this continuing purpose. This, in turn, provided the baseline of monetary and derived financial emission for what was to become a hyperinflationary expansion of a physically contracting economy. (See LaRouche’s triple curve, Figure 3.)

In the end, this became the core of a global financial-monetary bubble comparable to that of medieval Venice’s tool, the Lombard League of Europe’s Fourteenth-Century collapse into a New Dark Age. However, in this case, the end-game phase of this hyperinflationary process was cornering of the world market in primary materials.

For those shrewd enough to recognize that the present world financial system is already hopelessly doomed, the witting class of predators must have a “landing place” outside the bounds of such a general financial-monetary collapse. Essential raw materials represent that landing-place.

Underneath it all, is Leibniz’s catenary-cued principle of physical least action, the fundamental principle of the Leibniz infinitesimal calculus and Leibniz’s original correct discovery of the natural-logarithmic function derived from the double-catenary characteristic of the least-action principle. The comprehension of such systems in general, is found in the work of Riemann on hypergeometries. 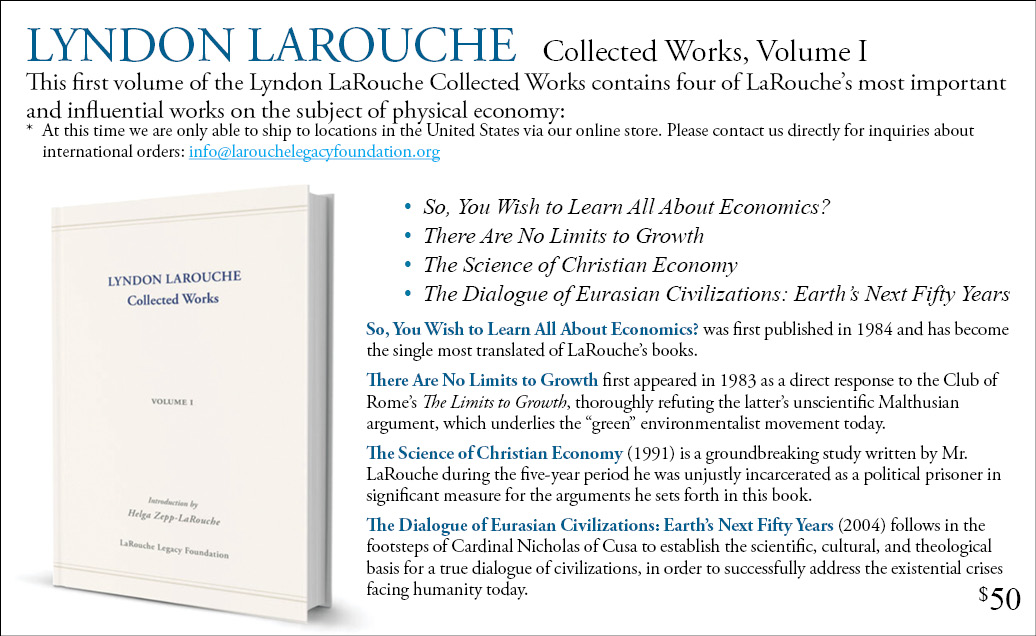 A Flood of Funds,
Central Banks Feed It

The average annualized rate of inflation of the futures-market prices of a basket of 14 “primary commodities,” into which speculative funds’ money has been flooding while their last gulf—the U.S. real estate/housing bubble—has started to shrink is shown in Figure 2. The rates are shown for three periods: a year, followed by a quarter; followed by a month—graphically illustrating the continuing acceleration of the rate of inflation in those commodities. The commodities are: Brent crude oil, propane, and gasoline; the common plastic base HDPE (high-density polyethylene extrusion); the metals zinc, copper, aluminum, tin, lead, nickel, and platinum; and the precious metals gold, silver and palladium.

The actual futures price of one of those commodities—copper—over the last 12 months is shown in Figure 5. This is a sample that shows the same increasing rate of the rate of inflation as the basket of 14, without the brief, wild fluctuations shown by some of them along the way.

The modern-era’s model for this accelerating inflation—hyperinflation—is 1923 Weimar Germany (Figure 1), particularly the June-November period of that year which ended with Reichsmarks losing their value entirely.

The driver for this hyperinflationary process is hedge funds and commodity index funds pouring speculative money in, irrespective of any “fundamentals” of supply or demand. While forecasts had been that speculative funds flows into commodity index funds would increase from $80 billion in 2005 to $120 billion this year, the figure appears to already have reached $100 billion by April. And these index funds are only one part of the huge flows from banks, hedge funds, private equity funds, derivatives speculators, and even the now-besotted “conservative” institutional funds like pensions.

This flood of funds begets a second inflation driver—mergers. In gold, for example, since September 2005, there have been at least 20 significant mergers and/or acquisitions (M&A) in the global gold industry alone (compared to just 5 in the first half of 2005), reports Merrill Lynch. The same is true for aluminum, nickel, and especially energy companies.

Central bank money emissions are fueling this bubble process, the extreme point shown in Figure 3 of Lyndon LaRouche’s Triple Curve Collapse Function. As LaRouche notes, the U.S. Federal Reserve, from its March 23 weekly report on, suddenly suppressed public release of information on its broadest money-supply measure, known as M3, although acknowledging that the Fed is, of course, still gathering and computing this information.

The rate of expansion of M3 has accelerated, even as the financial press abounds with talk of “tightening” by the central bank. For the 13 weeks ended February 27, M3 had grown at a very high 8.7% annual rate. Since then, the data is “classified.”