Man As a Galactic Force

Benjamin Deniston of the LaRouche PAC Science Team gave this presentation to the weekly larouchepac.com webcast on April 24.

To continue the discussion that we've initiated, really the campaign on this "water" issue: Mr. LaRouche wanted this raised again tonight, but then brought to a new level, a new perspective on what we're dealing with when we're talking about the "water" crisis. As we've discussed, there is a crisis. There's a crisis in California. There's a crisis in other Western states in the United States. There are water crises in many nations and many regions around the world.

This is, perhaps, most stark in the United States in California, as we've discussed. But, there is a deeper issue that we want to get into. That fact, that we have a lack of water in this location or that location, isn't necessarily a "water crisis" per se. It's a cultural crisis. It's a crisis, as Mr. LaRouche was saying earlier today, in the lack of understanding by leading policymakers with the very nature of mankind, what it means to be human. As Matthew [Ogden] referenced, Mr. LaRouche was saying earlier today, we have legislators who legislate for a species that they don't really understand.

And, perhaps, typical, leading this type of idiocy, is [California Gov.] Jerry Brown. He's said this in his own words. That's useful, because you can just quote him, so you don't have to do much work. You just repeat what the guy said, and you get a clear expression of the problem. When push came to shove on this water issue, and there he is, as the responsible governor for the state facing an imminent crisis for a lack of water, his reply is: Well, the state really only used to have 300-400,000 people anyways. Now we have almost 40 million. So, we're obviously way beyond the capacity of the state.

This is the most idiotic thing! You could say that about any part of the entire world. You could say that about Europe. Europe, a couple hundred years ago, had a much lower population, it had a lower "carrying capacity." You could support fewer people in Europe, on the same European territory, 300-400 years ago. The whole world used to only be able to support a few million people, if you go back a few hundred thousand years.

Yes, that's a true statement. There used to be 300-400,000 people in California. But you could say that about any part of the world.

What you see in such statements, is a profound lack of understanding of the fundamental nature of mankind. There's no fixed "carrying capacity" for mankind. Yes, there used to be 300,000 people. Mankind changed his relationship to the environment! Mankind progressed. Mankind increased the potential relative population density. Mankind was able to wield an effect, and we created, out of a desert, the most productive state in the entire country. That's typical of what mankind does, as real human nature. (Figure 1) 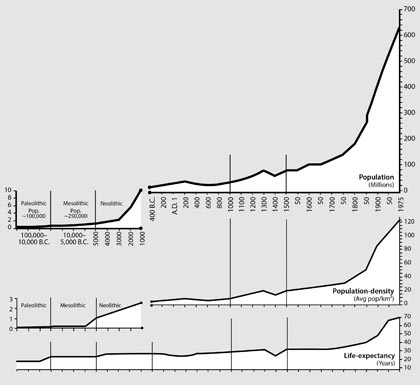 So, to cite the idea that the "carrying capacity" of the state used to be a small fraction of what it is now, and that somehow we should base our policy on that, is utterly insane. It's a lack of understanding, again, of the fundamental nature of the human species, of mankind.

Just to use that as a typical expression of the failed level of thinking that we're dealing with, what Mr. LaRouche said we want to get at today, is how do we approach this as humans, rather than as animals? Jerry Brown defined the "animal approach." That's his policy: depopulate, go back to a level where you only have a fraction of the population that there is now, because he has no understanding of the true nature of mankind and human progress.

Water Is Not 'Finite'

But how do we address this as really humans, as human beings? How do we, as a unique species on this planet, fundamentally different from animals, how do we approach the situation around water, the water crisis?

Take a first look: You're dealing with water, what do you see? We see we have a global system. First, it's not a finite supply, we're not using up water supplies. You have a cyclical system that involves the whole planet. And what mankind's been able to do is manage those cycles, manage those systems, to make them more productive, to allow mankind to expand populations, develop deserts, develop arid regions, develop agriculture. And mankind has managed—not drawing down some finite supply the way people talk about it today—but we've managed these cycles, these systems of water on the planet, to our needs, to ensure we make the system able to support higher living standards of a growing population. That's characteristically human; that's what makes us human. There's no limit to our ability to do those types of things.

So we're dealing with a single, global water system; but as we've been discussing on these shows, we're now at the point where we're looking at this more closely, we're re-approaching this thing we call the global water system. And we're realizing it's not really a global system: We're looking at a manifestation on the planet Earth, but what's being manifested is not fundamentally a phenomenon of the planet Earth itself. The global water system itself, as we've discussed, is an expression of cosmic principles, cosmic influences. It's an expression of the activity of the Solar System as a whole. The Sun is driving the entire process; the entire water system as we know it is powered and driven by the activity of the Sun, by nothing on Earth. So you're immediately dealing with the expression of something which is reflecting the process of the Solar System as a whole.

But what we're putting on the table, and what is really the challenge for those of us who choose to approach this crisis from the standpoint of being human, rather than animals, is that we now have insights into a higher-level understanding of this system, and it's not even just the Sun; it's not even just the Solar System, but the water cycle as we experience it, as we depend upon it, as we manage it, expresses the relationship between our Solar System and the galaxy more generally.

Now one of the most important influences affecting how the water system operates, especially in the atmospheric aspects of the cycle, is the role of galactic cosmic radiation, galactic factors, constantly affecting and determining the conditions of this supposedly Earth-based cycle. 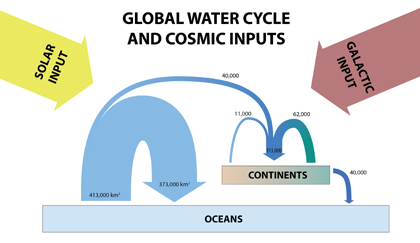 We've been covering this over the past weeks, that what you see as the global water system, that what we think we're dealing with, is really a phenomenon, as Mr. LaRouche was saying earlier this week—it's a phenomenon, but what are the principles? What's driving it, what are the causes? You see this expression, but now we're seeing that this expression itself, is manifesting activity that's driven by these larger influences, by the activity of the Sun, by the activity of the galaxy more generally and the relationship of our Solar System to the galaxy. So that's our starting point now, that's our minimum, that's our baseline, for thinking about water, about the water crisis.

This completely changes how we understand the issue of mankind's relationship, to the water cycle. And this is not just an academic study. This is not just saying, "Okay so we observe that the galaxy has this influence, has this role," and then we go back to doing what we were doing before. This is the basis for a completely new level of how mankind is able to act on Earth managing the system, influenced and informed by this higher-level, higher-principled understanding of the water system as an expression of this solar, galactic relationship.

We've discussed these water modification technologies. They're just the beginning phases of mankind being able to manage these atmospheric conditions, these conditions associated with the role of galactic activity in the water cycle, that we can actually tap into the activity of the cycle as a whole, in a way that's informed by our understanding of the system being driven by these larger, galactic forces.

So this is now the start, this is the baseline from which we re-approach this question from this point onward. Now we recognize that what we're dealing with on Earth is not an Earth-based process, it's not defined by the Earth, it's not bounded to the Earth; it's an expression of these larger systems, these larger processes.

And here we are, now, uniquely mankind discovering this and defining this, and this gives us a completely new basis to act based on this higher-principled knowledge of the system as a whole. And this is what I want to emphasize here, and transition to what Jason [Ross] is going to go through on the issue, because this is what Mr. LaRouche was stressing earlier today: We have to solve the water crisis, but the way we're going to do that is to understand that crisis and the solutions as being expressed, encapsulated in this more fundamental issue, of recognizing mankind as a fundamental force, not just on Earth, not an animal species on Earth, but a unique, creative force that can understand the Solar System, the principles governing the Solar System as a whole; that can begin to understand the principles governing this system of our galaxy and the relationship of our Solar System to our galaxy. And it's that knowledge, that new level of understanding that is uniquely human, that we can develop, which gives us the ability to act differently, to create new actions on Earth, informed by this higher, creative understanding, which will allow us to address the water issues in a completely new way.

It's this unique perspective we have now, of being able to conceptualize the principles governing this relationship between our Earth to the Solar System, the Solar System to the galaxy, and then use the science of that understanding to change how we act, to inform how we act, to allow us to act in a completely new way on Earth, that is human, that's uniquely human creative action, something Jerry Brown does not understand. And Mr. LaRouche was saying earlier today, the problem is, the supposed leaders don't understand this fundamental issue.

So, to transition to Jason, I would just say, if you want water—we're talking to California, now—if you want your water, if the Southwest states want their water, you have to understand mankind's ability to change his relationship to the Solar System and to the galaxy more broadly, and that takes us to an issue of human creativity, which Jason is going to discuss for us today.