Good evening.... I'm joined here in the studio by both Benjamin Deniston and Jason Ross from the LaRouche PAC Scientific "Basement" Team.

This broadcast is intended to serve as a sort of prelude to an event which is happening tomorrow, a live town hall meeting which will be simulcast from three locations—New York City, California, and Texas—and addressed by Kesha Rogers and Michael Steger—both members of the LaRouche PAC Policy Committee—as well as Ben Deniston.

Earlier today we had a chance to speak with Lyndon LaRouche, and he emphasized that if you've been joining us over the last few weeks, you'll know that LaRouche PAC has set a new standard of leadership with the presentations that Ben Deniston has given, both on these broadcasts and also elsewhere. And our job here tonight, is to draw out the implications of what Ben has presented from the standpoint of this question: What is the human species? What is our mission in the Solar System? And, what must be done to ensure that mankind fulfills this mission?

The problem that we face—and this is what Mr. LaRouche emphasized earlier today—is that very few people in positions of leadership rise to that standard—the standard which was set by the presentation that Ben Deniston has given. You do have a very small but qualified number of leaders in areas of this planet such as the government of China and related countries such as the constituent countries among the BRICS [Brazil, Russia, India, China, South Africa], who do rise to that level of responsible leadership.

However, here in the United States, we confront what you could call an epidemic of stupidity and pragmatism. And you have the press, the mass media, the members of Congress, elected officials generally, and the American public in general, who have no efficient understanding of the gravity and the profundity of the challenges which confront mankind. They have no real insight into reality, and they instead substitute a narrative which they wish to be overheard supporting, and feel comfortable being overheard supporting, but which has no basis in provable scientific fact. They adopt slogans, they adopt positions on so-called political issues, some of which may even be the correct ones; but these opinions will tend to have no real merit in fact, because they're not formed from the standpoint of scientific competence and scientific principle.

So, this is the significance of what you've heard presented by Ben Deniston over the past several weeks, which sets an entirely different standard.

Mankind's Role in the Solar System

Now, as Mr. LaRouche emphasized in our discussion with him earlier, what we need is an efficient apprehension of mankind's true role in the Solar System and beyond, and the commitment to use every means available to mankind to fulfill that. Or, said otherwise, we need people to begin acting like human beings, and not just higher apes. We need to ask the question: What is the natural destiny of mankind? What is the current ability of Man to achieve that destiny? What were the potential future ability of mankind to achieve that destiny, were mankind to begin acting according to his true identity? And what is hindering mankind from attaining that future?

And it's from this standpoint that you can confront the crisis that we face here at home as well as abroad. Yes, indeed, the United States has a crisis—a big one—typified by Barack Obama; as you've heard typified by [California Gov.] Jerry Brown; but it is not only the United States. Mankind as a whole is in a crisis, which is caused by the way that mankind in general tends to think, and the way that governments tend to make policy based on their failure to take into account the identity and the true mission of mankind. This must be the starting-point, and not some afterthought. We have to begin from the standpoint of what the nature and the destiny of mankind must be, and then proceed from there—not the other way around.

And, as Mr. LaRouche also emphasized in our discussion today: The work that Ben Deniston has done achieves this standard, and allows us to do just that. It allows us to at least begin to perceive that mankind has a future destiny which we have barely yet even begun to understand. And this is an insight which should define an entirely new view of mankind's view of mankind himself.

So, the responsibility of those who do have this quality of insight is to educate and to lead the rest of society, and allow our fellow citizens to climb upwards to this level, to this view of the understanding of themselves, and make them more intelligent—as opposed to attempting to stoop down to their level for the sake of popularity, and, in so doing, make yourself less intelligent.

"Ask yourself this question: How many members of Congress understand this, the nature of the human being? How can they pretend to have the authority to legislate the affairs of mankind, if they have no understanding of what mankind even is?"

So, the problem that we face, is the tendency by members of Congress and other elected officials—even the relatively better ones—to submit to stupidity and to compromise with incompetence.

And this is what is killing us—literally! Just look at the current potential for widespread depopulation and drastic rises in the death rate caused by the water crisis now in California and the other Western states. Look at the thousands of refugees who are drowning and dying in the Mediterranean, who are fleeing from the utter chaos which has been created as a direct consequence of Obama's illegal wars in Libya, against Syria, and the surrounding areas of North Africa. Look at the installation of an avowed Nazi government in Ukraine, and the looming threat of a thermonuclear war against Russia—but not only Russia, also not to mention China and elsewhere.

These are the consequences of the willingness to accept the general stupidity of so-called "politics" today, and to compromise with both what the Obama Administration and the Bush-dominated Republican Party represent.

So, we at LaRouche PAC fully intend to create a new Presidency. But it must be created from this standpoint: What is the true mission of mankind, and what responsibility must our nation have to play its part in a positive way in allowing mankind to achieve that mission? 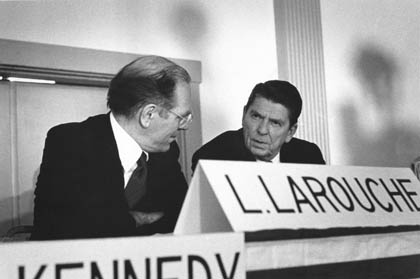 And we intend to do this much in the way that Lyndon LaRouche himself played a critical role in organizing the policy of the incoming Presidency of Ronald Reagan in the years leading up to his election in 1980 around what became known as the SDI, the Strategic Defense Initiative, which was an expression of the highest potentials of the human mind to harness the power of new physical principles in order to change mankind's view of himself as a species, change our relationship with the Solar System, and, in so doing, change the destiny of the human species itself, preventing the self-extermination of mankind through a holocaust of thermonuclear war.

However, because of the poisonous influence of the Bush family inside the Reagan Administration, that potential victory was sabotaged and derailed, and we now find ourselves on the verge of a war potentially far, far greater in magnitude and in destructive capability than what we faced even at the time of Reagan's Presidency—which is a danger that I believe underscores the responsibility that we have here, even as a small handful of leaders this country, all that much more.