This article appears in the May 1, 2015 issue of Executive Intelligence Review.

Murder in the Mediterranean

April 24—The evidence is clear: The Barack Obama who now comments, distant and seemingly uninvolved, on the de`ath of 900 migrants in a single boat, is the murderer quietly viewing the scene of his crime, while media investigators scurry about pointing fingers at Europe. And his crime is not the drowning of these 900 only.

It is Obama's jihadi killers in Libya—the ones who have shot and bombed their way into power in Tripoli since the Obama/British "regime change" bombing and invasion of 2011—who are behind the boat smuggling operations in which unknown thousands of migrants have died at sea. The U.S. assassination of Muammar Qaddafi ("We came, we saw: He died," intoned Obama Secretary of State Hillary Clinton over Qaddafi's corpse) turned the former state of Libya into the fountainhead of terrorism for all of North Africa, the Sahel, and even Syria. Now the "winners" of Obama's murder sweepstakes in Tripoli, are organizing the herding of refugees onto boats to drown by the thousands. "The Mediterranean is being made a cemetery," cried Pope Francis, and it is Obama and British Prime Minister David Cameron who laid it waste.

Moreover: The same Obama crime, then abetted by his close friend at the time, President Recep Tayyip Erdogan of Turkey, brought Islamic jihadis armed from Libya's weapon stores into Syria; and with the growth of the Islamic State (ISIS), into Iraq. Hundreds of thousands of refugees from those countries as well, trying now to reach Europe, have found themselves at the mercy of the Tripoli jihadi command which Obama fostered.

Consider the great debate over "responsibility" now going on among European governments, as a discussion of how to deal with the growing numbers of victims of Obama's (and Cameron's) crime of unleashing and arming terrorism throughout the Mediterranean region. Justice for this war policy by the great Nobel Peace Prize winner in the White House, begins by throwing him out of it.

On the weekend of April 18-19, between 700 and 900 African migrants reportedly died in one of the largest shipwrecks in modern times in Libyan territorial waters. Since the start of 2014, the Los Angeles Times reports, there have been about 4,400 boat deaths of migrants coming from Libya—with 900 so far in 2015 before the latest incident. Some estimates say 20,000 have drowned, among 200,000 fleeing migrants.

These and other deaths as a result of the 2011 Libya War are not "collateral" damage—they were the intent. It was Obama and the British who rammed through the UN Security Council resolution in 2011, in the name of saving Libyan civilians from a "humanitarian" disaster in Benghazi; it was Obama and Cameron who lied to the UNSC, saying there was no plan for regime change; then a U.S.-U.K.-led military coalition eventually started the regime change by bombing Libya. For specific reasons which might have to do with his election campaign funding, French President Nicholas Sarkozy inaugurated the air strikes, informing his EU partners after the attack had started. And it was French Intelligence under Sarkozy which led rebels to capture and murder Qaddafi.

It was Obama, Britain, and the Saudi and Qatari Wahhabis who put the al-Qaeda-affiliated Libyan Islamic Fighting Group (LIFG)'s people into power, and later ran the ratline of arms from Libya to Syria, which built up al-Nusra and the Islamic State.

When U.S., U.K., and French bombers and special forces "saved" the city of Benghazi from an imminent advance of Qaddafi's armed forces in 2011, they were saving the powers in that city who had sent a greater proportion of foreign jihadis to fight U.S. forces in Iraq since 2003, than any other region.

The Obama Administration is effectively repeating that criminal folly today with its Saudi ally, saving al-Qaeda in Yemen from the Houthi rebel forces who were in the process of defeating al-Qaeda until Saudi Arabia started bombing with Obama's active backing. Al-Qaeda in Yemen is consequently expanding its murderous operations—the constant result of all Obama's actions around the Mediterranean. 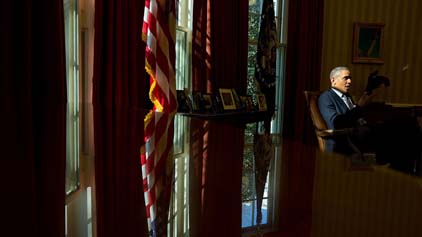 The Muslim Brotherhood/al-Qaeda forces that Obama "saved" in Benghazi (generally run by the LIFG of Muhammad Belhaj) went on to spawn and link up with other militias in chaotic Libya, murdering Americans at the Benghazi consulate in 2012, setting up terrorist training bases in the south and east of the country, and running weapons to Syria and Iraq. After Libyans elected a representative government in 2014, the LIFG and Muslim Brotherhood took over Tripoli, and forced the elected government to flee to Tobruk on the Egyptian border. Tripoli's "mayor," Maydi al-Harati, led an al-Qaeda force of 600 jihadis in Syria.

Obama's White House now insists that Libya's elected government, in exile in Tobruk, must negotiate with the murderers in Tripoli to form a new government.

These are the same jihadi killers who are now profiteering by herding people onto the ships of death.

The Italian daily Il Giornale's war correspondent Gian Micalessin, in an April 20 analysis, pointed to the Obama Administration-backed Tripoli "government," as the entity running the traffic of human beings through the Mediterranean.

Since last August, when the Fajr Libya (Libyan Dawn, part of LIFG) jihadist militia took power in Tripoli, the Tripoli gang has been running the migrant racket, for purposes of financing its war against the elected government in Tobruk, Micalessin reports. 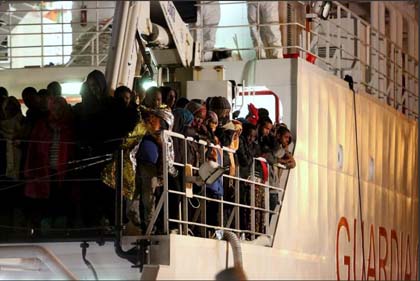 Fajr Libya is dominated by the Muslim Brotherhood and by former members of the LIFG. Tripoli has "intense relationships" with the jihadist militias that run the human trafficking at the southern Libyan borders with Sudan, Chad, and Niger. Since August, those militias have had a green light from the Tripoli gang to move tens of thousands of human beings through the desert, to the northern coast of Libya. The southern smugglers get $800 for each migrant, and the northern smugglers charge another $1,500 apiece. The "load" that sank on April 19 ensured an income of $900,000, Micalessin says, and the money is shared between the smugglers and the Fajr Libya leadership in Tripoli.

Micalessin writes that the jihadi "coalition" not only has support from Qatar and Turkey, but is also close to Ansar al-Sharia, a terrorist organization already "very close to the Islamic State." Ansar al-Sharia was the leading jihadi group in the attack that killed U.S. Ambassador Chris Stevens and three other Americans on Sept. 11, 2012, the anniversary of the 9/11 Saudi-backed terror attack in 2001.

A European Union emergency meeting called to address the migrants issue on April 23, reiterated support for Obama's UN-sponsored "negotiation" between the Tripoli terrorists and the Tobruk government. This, although all EU governments know the truth about the Tripoli gang.

That same meeting also failed to come up with any serious measures to either save human lives, or solve the roots of the migrants crisis. The EU refused to revive the successful Italian "Mare Nostrum" operation, which had rescued over 100,000 migrants from October 2013 to Nov. 1, 2014. Instead, it increased funding for the current "Triton" operation, which is a border-patrol mission operating within EU territorial borders.

Furthermore, the EU failed to adopt a change in its current immigration laws, which do not allow immigrants to reside in countries other than their country of arrival. This puts an enormous strain on Italy, the main target of migrant ships, and on bankrupt Greece. The most they could agree on, was that EU member countries can host contingents of immigrants "on a voluntary basis." For the rest, the EU will repatriate "unauthorized economic migrants to countries of origin and transit," as the final communiqué states.

How this will be implemented is an open question. Most hypocritical was Prime Minister Cameron, who offered British ships for the Triton operation, under the condition that rescued migrants are not brought to Britain! This is the same Cameron who is personally co-responsible for the immense human tragedy unfolding in Libya and northern Africa.

Furthermore, the EU Council has given a mandate to EU High Representative Federica Mogherini, to explore ways to destroy smugglers' ships in Libyan ports, before they sail. This will hardly be possible, as international law prescribes that such operations require a UN mandate (possible) and an agreement with the target country (impossible).

The other root of the crisis—poverty—has not been addressed by the EU leaders. And yet, the fact that the 900 who died in the shipwreck on April 18 were coming from Sub-Saharan Africa (the Sahel region), identifies, in poverty and hunger, a clear cause of the problem. This is the area infested by Boko Haram terrorists, but there is at least a three-decades-long history of migrations from the Sahel to Northern Africa and to Europe, due to poverty caused by desertification.

Helga Zepp-LaRouche commented on the situation in a webcast on April 22 (translated from German):

I see here in one glance, in the reactions to this situation, two completely different systems, two completely different paradigms. One, is really a form of a new fascism. One really has to see the absolutely cynical manner in which the EU replaced this Mare Nostrum program, maintained by Italy alone for the past year, with a program which no longer makes the attempt to save refugees from the Mediterranean Sea, but which rather says with complete cynicism, "The more of you who drown, the more the terror for those who will then be too frightened to come." That is really the total moral bankruptcy of this EU.... We knowingly let thousands of human beings drown, to defend Fortress Europe somehow.

This is being done in the same spirit as the destruction of the Greek economy by the Troika, in full awareness that the death rate in that country will be increased; the same thing can be seen in Italy, Spain, and Portugal. And it is the same spirit which blocks real development, which simply refuses real help—to Africa in general. You see this inhuman behavior, which even accepts depopulation, reduction of population; so that if you take all these aspects together, you are forced to suspect that this is exactly the intention—namely, to cut the population down.