This article appears in the April 27, 2018 issue of Executive Intelligence Review.

Unlocking the Secrets of the Aurorae 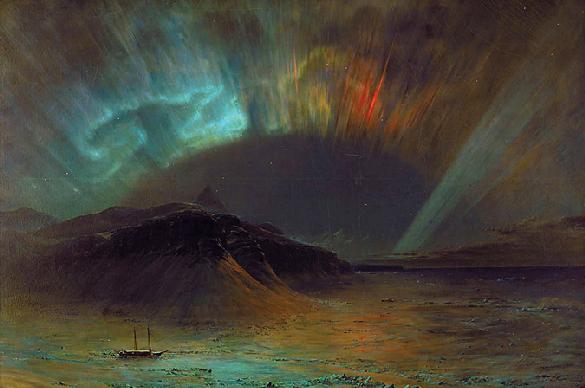 April 20—Cave paintings in France, dating to 30,000 years ago, reveal to us that prehistoric man was in awe of what we now call the Aurora Borealis, or Northern Lights. This eerie and beautiful phenomenon is, in fact, a near-Earth laboratory in which we can study the profoundly non-empty nature of space. Since the dawn of mankind, we have pondered the firmament and have sought to understand the nonvisible causes of the rhythms of the heavens. Thousands of years of scientific inquiry and experimentation have not only enabled us to navigate the oceans, but have encouraged us to explore our Solar system and beyond.

On February 27, 2018, NASA released more information on the “Grand Challenge Initiative-Cusp” (CGI-Cusp), a two-year mission to investigate the upper reaches of the atmosphere and the regions home to the Aurorae—the Northern Lights (Aurora Borealis) and the Southern Lights (Aurora Australis). An international team of researchers and scientists will study the results of a series of launches of sub-orbital sounding rockets from two sites in Norway into the magnetosphere. According to NASA, GGI-Cusp will “investigate the physics of heating and charged particle precipitation in this region called the geomagnetic cusp—one of the few places on Earth with easy access to the electrically charged solar wind that pervades the Solar system.” Planning for the project began in 2012.

NASA also reports that, “Understanding the contribution that auroras make to the total amount of energy that enters and leaves Earth’s geospace system—referred to as auroral forcing—is one of the major goals of the NASA-funded Auroral Zone Upwelling Rocket Experiment, or AZURE. The more we learn about auroras, the more we understand about the fundamental processes that drive near-Earth space.”

Some of the launches will release chemical tracers that will allow scientists to create a 3-D image of the flow of particles through the ionosphere (similar to a wind tunnel); others will track the flow of charged particles during their flight. This is an electrifying commencement for a total of eleven launches and eight missions, and should open the door for discoveries.

The Aurorae were extensively reported in Ancient Greece, before the time of Plato. Anders Celsius, in 1741, noted the connection between the Northern Lights and magnetic activity. In 1743, the great 18th Century Russian scientist, Mikhail Lomonosov, began a series of scientific studies of the Northern Lights. The science of geophysics, and the developments pioneered in the 1800s by Carl Friedrich Gauss, opened the way to the study of the characteristics of the magnetosphere.

The study of any phenomenon in the cosmos naturally involves electromagnetic fields, and the Aurorae are no exception. Some among you may now be asking, “Why study these areas?” or “Why is this important now?”

If you’re at least as smart as a caveman, then your mind won’t be fooled into believing what your senses are telling you. One of the major challenges to colonization of other planets, is the impact of cosmic radiation on human beings. Much of our modern technology—especially the miniaturization of computers and some medical devices—is thanks to the tremendous spin-offs and discoveries from the mission to land man on the Moon, as conceived by President John F. Kennedy. The in-depth study of the Aurorae will create breakthroughs in our understanding of the universe, and will help us create technologies to explore and develop the universe, on Earth and beyond. 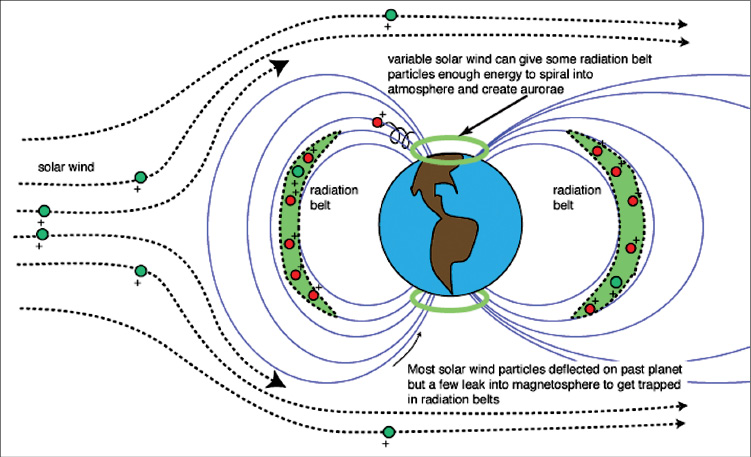 The Aurorae are a result of a complex cascade of reactions between the Sun and the Earth’s electromagnetic fields. The Sun is constantly emitting high energy particles and radiation that reach Earth’s magnetic field as a “solar wind.” Some particles, captured in the field, are funneled to the two poles, known as the “magnetic cusp.”[fn_1] These streams of high-energy particles then impact and interact with the molecules of gases in the upper atmosphere, emitting visible light when the energized electrons fall back to lower energy levels; the different colors we see generally have to do with the type of gases impacted: oxygen generates yellows and greens; nitrogen generates reds, blues and violets (Figure 1).

Aurora activity correlates with the occurrence of sunspots on our Sun, which follow a roughly 11-year cycle. Strong solar activity has been linked to widespread interference with the electrical grid in northern latitudes.

Although the general physics of how the Aurorae are generated is mostly understood, it has been remarkably difficult for scientists to forecast changes in the Aurorae due to activity in the processes of the heliosphere and magnetosphere. 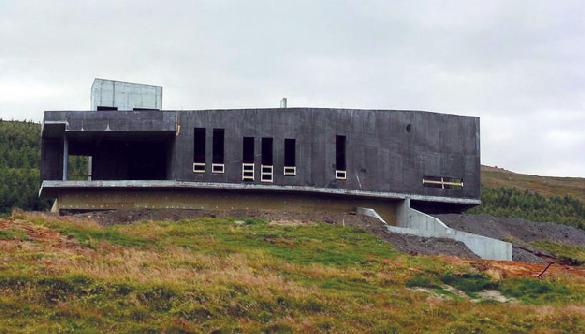 In recent years, there has been broad international cooperation among many nations for the study of the Aurorae, with studies too numerous to detail here. Of note are a research center in Iceland, funded by China and shaped like a ship and pointing northward (Figure 2),[fn_2] and the array of three identical satellites launched by the European Space Agency (ESA) to observe events in Earth’s magnetosphere, called SWARM.[fn_3]

Although Aurorae are remarkable in and of themselves, they are most interesting when they “misbehave.” Contrary to their appearance as “peaceful” and “enchanting,” they represent powerful and dynamic forces. And, far from being in “empty space,” the environs of Earth and beyond can only be understood as Lyndon LaRouche describes: “Recently accumulated investigations bearing on the leading role of what is termed a ‘cosmic radiation’ permeating what is never, and nowhere a part of ‘empty space,’ now depend on deeper insight into the conclusive quality and forward-looking implications of the apparent qualitative divisions, and interrelations among the lithosphere, biosphere, and noösphere within the confines of that region which our Solar system inhabits on our galaxy’s periphery.”[fn_4]

In the mid-1950s, scientists discovered a new type of activity generated by geomagnetic storms, which was barely visible to the naked eye, since it was in the red wavelength range.[fn_5] It was a sub-visual emission that was picked up by a photometer. The scientists were surprised by the fact that it was stable for about 24 hours, and appeared much further south than the familiar aurora arc; it was dubbed a Stable Aurora Red (SAR) arc. The scientists noted, “While aurorae come from impulsive bursts of energetic particles along high-latitude magnetic field lines (and therefore from distant regions in the magnetosphere), SAR arcs come from a prolonged drainage of heat from the Van Allen radiation belt regions that move closer to Earth during large geomagnetic storms. Hence, SAR arcs occur at mid-latitudes.”[fn_6] An alliance of several space agencies was formed, along with many hundreds of citizen-scientists, who continue to research the SAR arc. A photo of a SAR arc was captured in 2016 by Scottish amateur astronomer and photographer Stewart Watt.[fn_7] The most striking feature of this activity is that though the arc is generally stable, it twists and spirals upwards, indicating the presence of a vortex of more concentrated energies. This should remind one of the twisted filaments observed in a controlled thermonuclear fusion reaction. If these energies could somehow be harnessed, what kind of reaction would occur, and how could it serve mankind?

In 2017, thanks to the SWARM mission, supersonic plasma jets high in our atmosphere were discovered; these are known as “Birkeland Currents,” first postulated about a century ago by Norwegian scientist Kristian Birkeland.[fn_8] Although still being researched, these huge sheets of energy are believed to carry about 1 terawatt of electrical power—about 30 times more than what New York City uses during a heat wave. 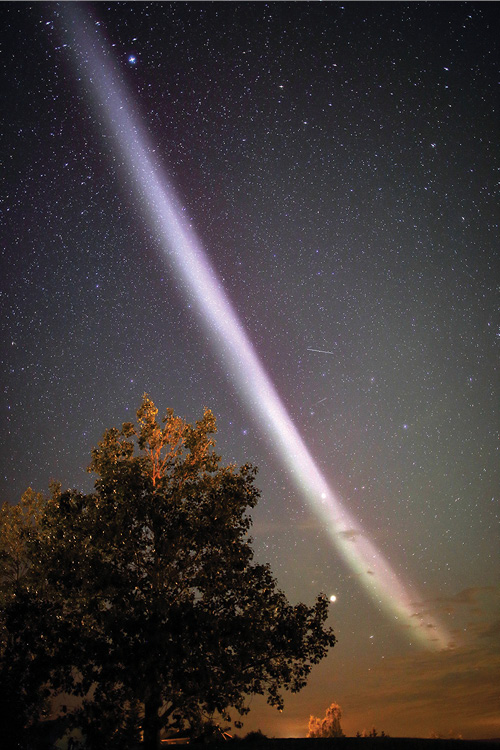 Most stunning, however, has been the recent discovery of yet another type of auroral arc, which was captured on film in 2017 by an amateur scientist in Calgary, Canada. This unfamiliar activity was dubbed a “Strong Thermal Emission Velocity Enhancement” (STEVE).

Unlike the shimmering curtains of light of the Aurorae, STEVE is a stable arc aligned East-West across the sky, at lower latitude than the Northern Lights. It appears whitish to the eye, but shows up purple on camera, lasting around 30 minutes, with short-lived green “fingers” lying perpendicular to the main arc (Figure 3). STEVE is of such great interest that NASA has set up a task force called Aurorasaurus, appealing to citizen-scientists around the globe to participate in further research.[fn_9] 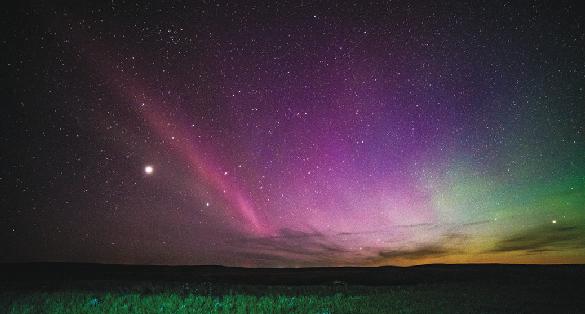 Each step forward in science always brings new questions and potential, and often takes the path of a sailing ship tacking into the wind. To look ahead to the colonization of the Solar system and beyond, mankind must begin to master the underlying physical principles of celestial electromagnetic fields and find ways in which their energy may be harnessed; the Aurorae offer a perfect laboratory right in our own “backyard.” You, the reader, can play a role in this great endeavor—by placing yourself in history, studying the great scientific minds of history, and becoming a citizen-scientist. Now is the time to shift humanity into a new, culturally optimistic paradigm!

Let this beautiful global phenomenon serve to unite mankind in a peaceful and fruitful exploration of our Solar system and beyond.

The National Oceanic and Atmospheric Administration (NOAA) has an online map that shows auroral activity in 30-minute increments: https://www.swpc.noaa.gov/products/aurora-30-minute-forecast

To join the search for STEVE: https://www.nasa.gov/feature/goddard/2018/mystery-of-purple-lights-in-sky-solved-with-help-from-citizen-scientists

[fn_1]. Recent missions have shown that the solar wind pressure is decreasing. The impact of this change is still under study. See: https://science.nasa.gov/science-news/science-at-nasa/2008/23sep_solarwind

[fn_5]. The human visual range is narrow; it is difficult to focus on objects close to the infrared range, as well as the blue/ultraviolet range (“black light”). Red light allows the eye to function in near-darkness, hence its use on submarines and some auto dashboards.