This article appears in the August 31, 2018 issue of Executive Intelligence Review. 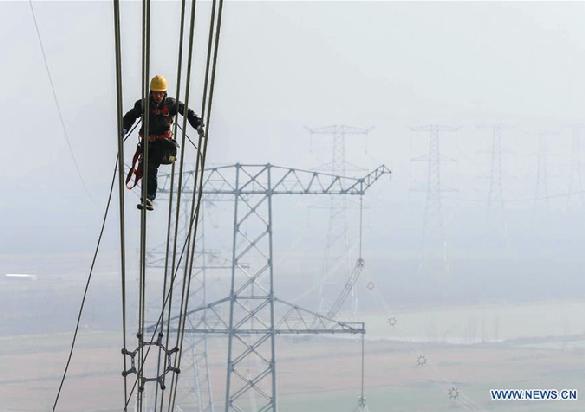 Aug. 26—China has made itself the world leader in ultra high voltage (UHV) electric power transmission, and is now taking this critical technology global, starting with a 2,000 km UHV line now being constructed in Brazil. State Grid Corporation of China and Electrobras of Brazil have now completed construction of the 11,233 MW Belo Monte Dam, the fourth largest hydroelectric dam in the world, on the Xingu River, a tributary of the Amazon. The power will be transmitted via the UHV line to the densely populated area of Rio de Janeiro.

UHV transmission is crucial, especially in larger countries, where electrical power is now transmitted at lower voltages across great distances. The higher voltage means the reduction of current (amperage) proportionately, and thereby lowers the loss of energy (as heat in the conducting transmission lines). Energy loss is a huge expense to a country, often due to inefficient systems (Haiti suffers nearly 60% loss), or due to the necessity of long transmission lines in large countries like Brazil, which suffers a 16% loss. The new UHV line in Brazil will reduce the loss to 7%.

The United States has one of the lowest loss rates in the world, at 6%, primarily due to the density of high output nuclear and other power plants in highly populated areas. Nonetheless, former U.S. Secretary of Energy Stephen Chu has called China’s development of UHV technology a “Sputnik moment” for the United States, the Financial Times reported on June 6, 2018. “China has the best transmission lines in terms of the highest voltage and lowest loss,” Chu stated. “They can transmit electricity over 2,000 km and lose only 7% of the energy. If we transmitted over 200 km we would lose more than that.”

China’s Ambassador to Brazil, Li Jinzhang, told People’s Daily that China’s UHV technology is “a calling card of ‘Made in China’. . . . This is the first time that China applies UHV technology abroad. Its construction inaugurates a new historic stage, which marks the recognition by other countries of UHV technology and other technologies created in China. Through the Belo Monte project, Brazil’s government, businesses and local population expressed the will and interest in deepening mutually beneficial cooperation which is advantageous to all.”

In fact, most functioning UHV lines active today are in China, although there are plans to wheel electrical power generated from wind turbines in Oklahoma to Tennessee via a UHV line, and India is building UHV lines with Siemens technology. In Europe, the only UHV line connects the UK with France under the English Channel. 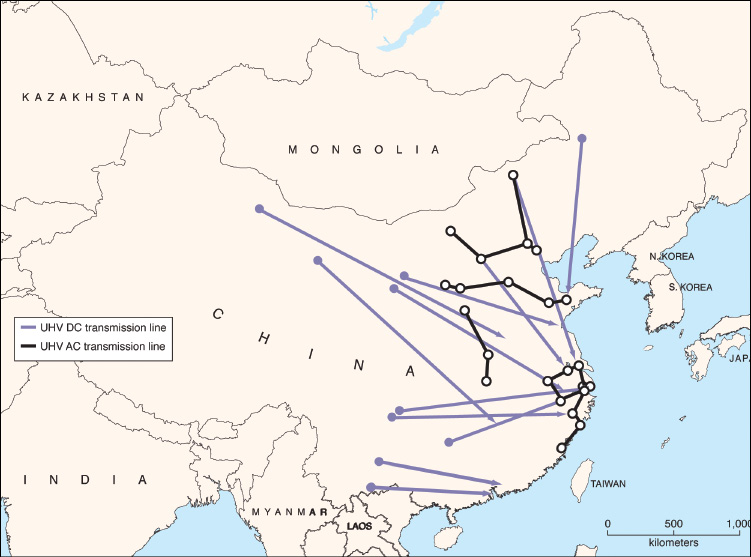 China’s UHV electrical transmission lines. The longer blue lines are direct current (DC) with only a single destination, while the shorter black lines are alternating current (AC), which lose more energy but are capable of dispensing energy to several locations.

In 1980, the Soviet Union began construction of a 1,150 kilovolt (kV) alternating current UHV line in Kazakhstan, intended to move power from Kazakhstan to the industrial centers in the Urals. It was the largest UHV line in the world at that time. However, the UHV substations required were never constructed outside of Kazakhstan, so the transmission was reduced to 500 kV on the Russian side. After the demise of the Soviet Union, the entire system was downgraded to 500 kV.

China’s State Grid, a state-owned company, runs nearly 90% of China’s power grids, and is also building the UHV line in Brazil. State Grid is the second largest corporation in the world (behind Walmart) with just under $350 billion in revenues, according to the 2018 Fortune Global 500 list. The company plans to build an “Asian Supergrid” in cooperation with Russian, Japanese and Korean power companies, to move power generated in Siberia to Seoul. 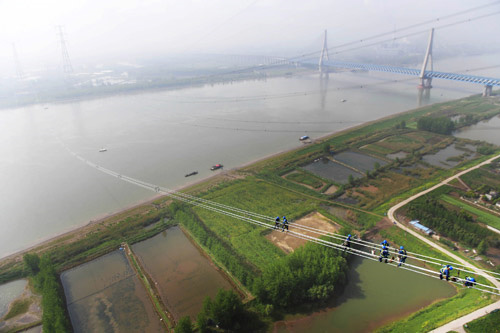 China faces multiple problems which have necessitated the development of UHV transmission. The primary sources of hydroelectric power are in the northeast and the west, far from the large population concentrations along the eastern coast and the central provinces in the south. Huge coal deposits are also concentrated in these more distant regions. Coal can be moved, but the rail system has historically been overburdened by the movement of coal, while coal-fired electric power plants have been a major contributor to the serious air pollution conditions in the major Chinese cities. Producing the electricity near the coal mines and moving the energy efficiently via UHV lines will help resolve these problems. 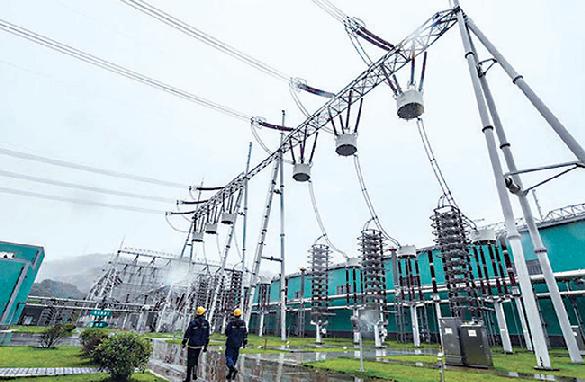 The original plan for the UHV grid projected 37 UHV lines by 2020, but this has been reduced due to the reduced demand from the time of the original estimates. According to China Dialogue, national demand growth averaged 11.7% from 2003 to 2012, but has fallen to 4.5% as of 2017.

China has invested heavily in wind and solar power facilities, which are also concentrated in the more distant regions of the west and northeast. As is the case with all of the solar and wind facilities promoted by the environmentalists, they are horribly inefficient and dependent on state subsidies. In the case of China, the UHV lines were intended in part to facilitate building these solar and wind farms in the distant areas, but these farms have proven unable to overcome the inherent limitations of these greenie-friendly power sources.

The South China Morning Post reported in 2016 that only 10-20% of the capacity of the UHV lines could be used for wind and solar, “since it was intermittent in nature and required the mixing of conventional electricity, like coal-fired plants, whose output was more stable throughout the day.” One of the original UHV power lines, which had been intended to move wind- and solar-generated electricity from Xinjiang to Henan, is in maintenance half of the time “due to damage caused by huge load fluctuations.”

On the other hand, just one of the UHV lines, the 1,680 km UHV DC, bringing power from the Xiloudu Dam in Yunnan Province to Zhejiang Province in East China, contributes 17% of Zhejiang’s power during the summer, saving more than 30 million tons of coal and reducing air pollution dramatically.

China’s innovation and world leadership in UHV power transmission—as in other areas of technology—is both transforming China at the most rapid pace of any nation in history, while also being made available throughout the world through the Belt and Road Initiative.