This article appears in the October 26, 2018 issue of Executive Intelligence Review.

VIEW FROM THE PHILIPPINES 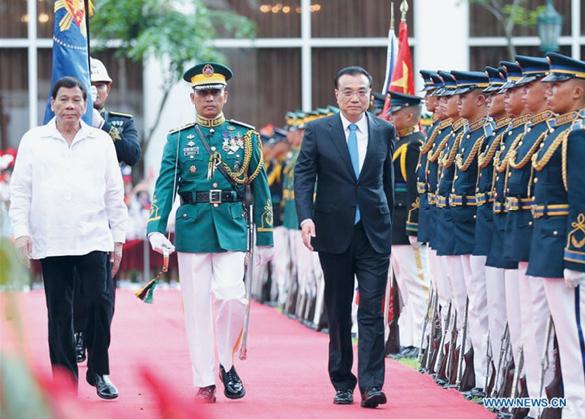 Zaida Reyes’ article, edited here for a non-Filipino audience, was published Sept. 26 in the Daily Tribune, newspaper in the Philippines. It is a valuable contribution to debunking the campaign by anti-China forces in the U.S. and Europe to portray China’s transformational Belt and Road Initiative as an imperial policy aimed at taking over targeted nations. Readers should also look at “Why Accusations Against China for ‘Debtbook Diplomacy’ Are a Hoax” by Hussein Askary and Jason Ross in EIR, September 7, 2018.

For the past few years, we have been reading incessant accusations from Western media and academic circles, then echoed in social media, about China’s alleged “debt trap diplomacy.”

Here in the Philippines we are also bombarded with propaganda that the Philippines-China agreements are leading the country into a debt trap with Beijing. This is a very timely subject, as the Philippines Central Bank reported on September 14 the good news that the country’s foreign debt had been reduced by $997 million, to $72.2 billion. 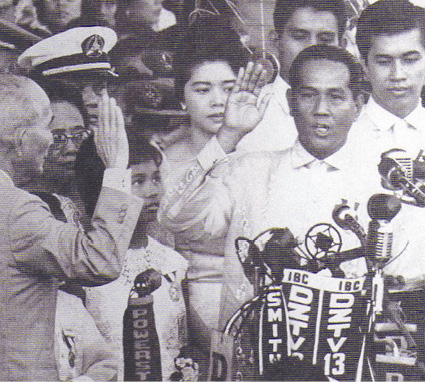 Malacañang Palace archives
Diosdado Macapagal being sworn in as President of the Philippines, Manila, Dec. 30, 1961.

This total foreign debt the Central Bank is reporting, is accumulated debt from the 1960s to this day, from 1961 when the U.S.-backed International Monetary Fund (IMF) compelled President Diosdado Macapagal to accept “structural adjustments,” i.e., “decontrol” trade, devalue the peso and liberalize capital flows, causing the peso to slip from P2 to $1, to P3.80 to $1, and doubling the Philippines’ debt to almost $400 million. Since that time the cycle of rising debt multiplied by massive devaluation has relentlessly plagued the Philippines.

In July of this year, in a very significant statement from Finance Secretary Carlos “Sonny” Dominguez at a Senate budget hearing, the government’s attitude to debt was explained: “We are not naive. We know all ODA [Official Development Assistance] projects of all countries are designed to influence. The Japanese do it, the Americans . . ., even Koreans. . . . When the Americans bombed Manila (in 1945), then gave us little money to fix it up, they extracted from us. . . .” Clearly, the Philippines has been chained to a debt trap since the 1950s under IMF structural conditionalities that eventually led to the passing of an “automatic debt service” law in 1977. U.S. Army photo showing destruction of the Walled City district of Old Manila in May, 1945, after the Battle of Manila.

The Philippines has been chained to the IMF, World Bank and Asian Development Bank (ADB) debt trap since the 1960s, yet the so-called “Amboys” (American boys) in the country such as Magdalo’s Rep. Gary Alejano, “Amboy” think tanks like the Albert del Rosario Institute and its stable of writers and talking heads such as Richard Heydarian, behave as if this fact did not exist, and instead point an accusing finger at the Duterte administration’s financial dealings with China, constituting such a miniscule amount today, as the “debt trap” problem.[fn_1]

On the sidelines of a Senate Finance Committee hearing August 27, Alan Peter Cayetano, Secretary of Foreign Affairs, told reporters the startling fact that loans from China today constitute only no more than one percent of foreign debt, that it could not possibly pose any danger of becoming a “debt trap.” In all likelihood, there will never be a China trap as the Filipino people have become so alert to that very bitter experience with the IMF, WB and ADB that everyone in this country is looking under every rug to detect any such danger.

Another significant fact is that much of China’s financial commitment so far has come in the form of grants, for the two bridges over Pasig [the river running through Manila], the multimillion-peso drug rehab centers in Mindanao, and assistance programs such as that for the Hybrid Rice program at the Central Luzon State University, as well as financial assistance to the victims of past calamities and major crises like the Marawi siege [a five-month battle in 2017 to free a major city in Mindanao seized by terrorists]. All loan packages for components of President Duterte’s infrastructure program, known as “Build, Build, Build,” are productive projects that ensure earnings to pay back such loans. 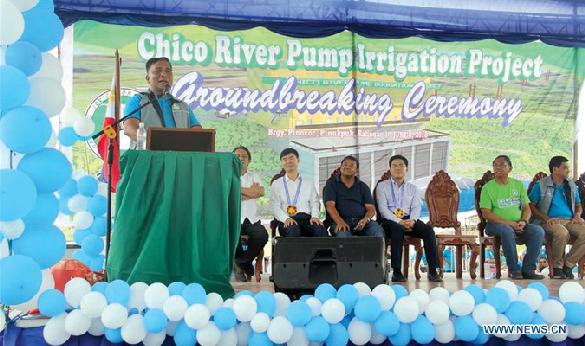 The real big-ticket financing will be signed this coming November during the planned state visit of China’s President Xi Jinping to the Philippines. One of these major projects is the $3.5 billion loan agreement for the construction of the Philippines’ legendary Bicol Express [connecting Manila with the Bicol Peninsula in the southeast of the main island of Luzon], or the $3.2 billion, 600 km Manila-Matnog rail line [on the southern tip of the Bicol Peninsula]. This project constitutes about 14 percent of the $24 billion investment deals agreed between Presidents Xi Jinping and President Rodrigo R. Duterte during the historic October 2016 visit of the latter to China—which is an amazingly fast pace of development.

Yet, even before this mega government-to-government project is signed, privately led Chinese investments have already been arriving by the droves. Prof. Alvin Camba, a Filipino doctoral candidate at Johns Hopkins University, wrote this in the July 19 issue of The Diplomat:

A year and a half later (after President Duterte’s visit to China in 2016), newspapers have argued that the predicted boom has failed to materialize. (But) according to actualized FDI data of the Central Bank of the Philippines, China and Hong Kong’s FDI inflows (which should be counted as one) had already reached $1.06 billion by March 2018 (surpassing) the entirety of Chinese and Hong Kong investments received under former President Gloria Arroyo ($828 million) and already reached five-sixths of the $1.2 billion under former president Benigno Aquino’s term. 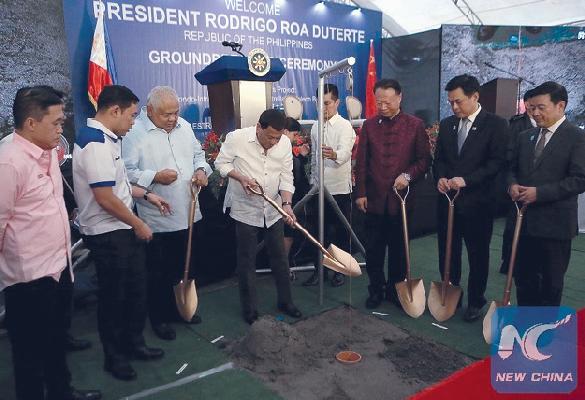 Mid-year in 2019, Package Two, consisting of rails and bridges in the Visayan island and Mindanao, water supply and flood control projects in Metro Manila and Luzon, industrial parks from North to South of the country, and a host of other projects worth billions more will be signed. The Philippines-China financial and infrastructure deals, with rates at or just above 2 percent interest, are actually financial assistance packages to help develop Third World economies to become mature economies, able to both supply and consume goods and services in the regional and global market.

So let’s get it straight: The “debt trap” has been the legacy of the Western Powers working through their multilateral financial institutions—the IMF, World Bank and the Japanese-led ADB. This debt trap scheme has been recorded in books of John Perkins, particularly his account of his personal experience as a “loan consultant” of the Western financial institutions assigned to developing countries. Perkins’ 2004 book, Confessions of an Economic Hitman, recounts the methods by which Third World country leaders are entrapped, and how the Western Powers arranged to get rid of any uncooperative leaders.

[fn_1]. Editor’s note: Rep. Gary Alejano was part of two military insurrections against the Philippine government, in 2003 and 2007, spent four years in prison, but was pardoned and then elected to Congress. He led an impeachment effort against President Duterte in 2017. Albert del Rosario was Ambassador to the U.S., then Foreign Minister under former President Noynoy Aquino. He was a close advisor to President Cory Aquino, who was placed in office by the George Shultz-orchestrated coup against nationalist President Ferdinand Marcos in 1986. Richard Heydarian, a fellow at the Albert del Rosario Institute, is a regular contributor to CSIS and CFR forums and publications. [back to text for fn_1] 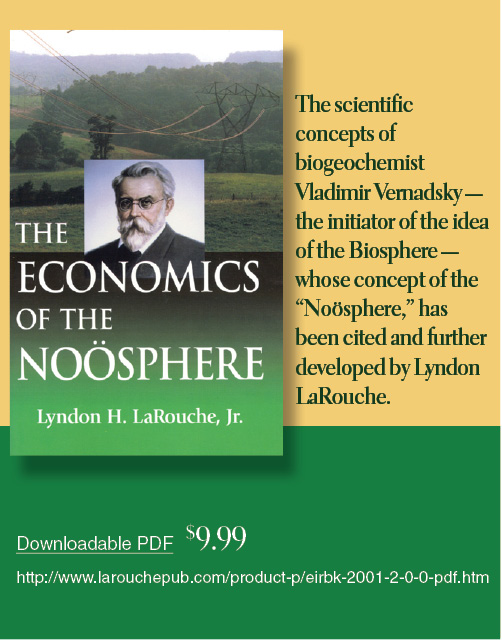 Buy The Economics of the Noösphere