Coup in Bolivia a Replay of Ukraine’s ‘Maidan’ 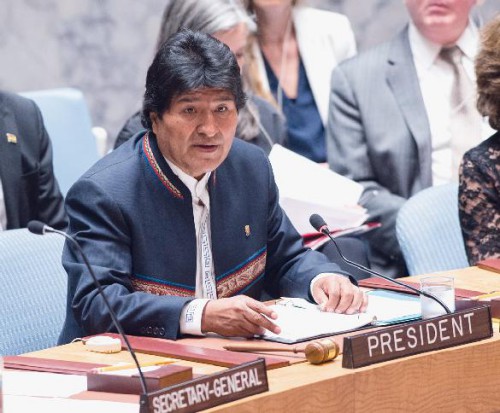 Dec. 9—Despite the railings of corporate media and complicit governments about alleged “vote fraud” in Bolivia’s October 20 presidential elections—consistently claimed to be the reason for President Evo Morales’s subsequent November 10 resignation—there is no disguising that what actually occurred in that country was a fascist coup d’état, straight out of the “color revolution” playbook of Gene Sharp and George Soros.

This was not the typical Ibero-American coup of the past, carried out by the nation’s armed forces, but rather an exact replay of the violent 2014 “Maidan” coup in Ukraine, in which the same cast of characters in the global Project Democracy apparatus—USAID, the State Department, the National Endowment for Democracy, and the National Democratic Institute, among many others—partnered with an overtly fascist movement on the ground, in this case run out of the separatist department of Santa Cruz in southeastern Bolivia. The Pro-Santa Cruz, a civic committee run by millionaire Catholic fascist Luis Fernando Camacho, with known ties to Eastern European fascists, operated as the local version of Ukraine’s neo-Nazi Azov Battalion.

The timing of these events is key. As EIR documented in its article, “Bolivia Sets its Sights on Fusion Energy and Eliminating Poverty,” in its August 16, 2019 issue, Morales’s model of sovereign economic development, for which he cooperated with Russia and China, was a thorn in the side of the global neo-liberal financial order. But London and Wall Street financial interests had managed to keep Morales relatively isolated in South America, and therefore less dangerous, with neo-liberal presidents Mauricio Macri and Jair Bolsonaro running the governments in neighboring Argentina and Brazil respectively, and their co-thinker Sebastián Piñera governing in Chile. All of that changed, however, when recent events in the region threatened to shift the correlation of forces continentally.

Two days before Morales’s resignation, on November 8, former Brazilian President Luiz Inácio Lula da Silva was released from jail, where he had been unjustly imprisoned for over a year, and immediately began mobilizing his sizable base against Bolsonaro’s vicious Wall Street-endorsed austerity policies. In Argentina, president-elect Alberto Fernández and his vice president-elect, former President Cristina Fernández de Kirchner, will take office December 10 and have made clear they intend to play a role continentally against neo-liberalism and regime change, working with Mexican President Andrés Manuel López Obrador. With “stable” Chile blowing apart with anti-austerity riots, British geopolitical interests determined that Morales had to go.

The coup was on. Project Democracy assets that for years have worked to subvert Morales’s government, promoting separatism and racial conflict through its networks in Santa Cruz, sprang into action. Bolivia’s divided Armed Forces made no attempt to defend Morales, probably on Washington’s instructions. In fact, it was the head of the Armed Forces, Gen. Williams Kaliman, who “suggested” to Morales that he resign on November 10 “for the good of the country,” given the racist violence unleashed by Camacho’s hordes and allegations of vote fraud in the flimsy preliminary report issued November 9 by the Organization of American States’ (OAS) vote-auditing delegation in the capital, La Paz.

One day after he resigned, facing a dangerous security situation—he had been informed there was a $50,000 bounty on his head—Morales departed Bolivia with his Vice President Álvaro García Linera, having accepted Mexico’s offer of asylum. On November 12, Jeanine Añez, second vice president of the Senate from the right-wing Democratic Union (UD) party, illegally assumed the presidency, despite the absence of a quorum legally required to approve it. Legislators from Morales’s Movement Toward Socialism (MAS) party, who hold a majority in both houses of the Plurinational Legislative Assembly (ALP), feared for their lives and didn’t show up for the vote. The U.S. and the European Union immediately recognized Añez as Bolivia’s new “democratic” president, welcoming the downfall of the “authoritarian” Morales.

Morales explained that he resigned in an attempt to quell the near-civil war conditions that had erupted in the wake of the elections, in which Luis Camacho’s roving paramilitary “resistance” hit squads, linked to the openly pro-Nazi Santa Cruz Youth Union (UJC), violently assaulted Morales’s indigenous supporters. Thundering that Morales had committed vote fraud, Camacho’s fanatical mobs roamed cities on motorcycles armed with bats, rocks and homemade explosives to attack those they call “shit Indians”—beating and publicly humiliating them, threatening family members and burning their homes. Vowing he would “paralyze the state” until Morales resigned, Camacho raved that this was not overthrowing a government, but rather “liberating an entire nation.” 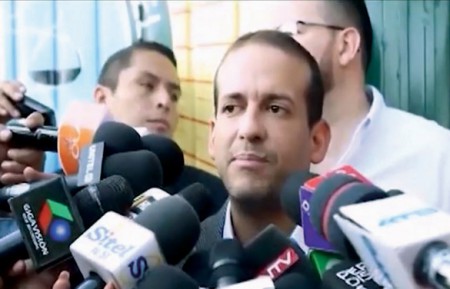 Azov News
A group of Azov Battalion members pose under the NATO and Nazi flags.

Liberated, that is, by a UJC that has been compared to Ukraine’s neo-Nazi Azov Battalion and that is known to repeat the Nazi “Sieg Heil” salute while proudly waving around their automatic weapons. Camacho, along with allies including the likes of Santa Cruz governor Rubén Costas, a former head of the Pro-Santa Cruz civic committee, has for years demanded that Santa Cruz be established as a separate country, claiming that its “European” heritage made it “different” from the rest of indigenous Bolivia. It was Costas who led a 2005 uprising to separate off four departments in eastern Bolivia, including Santa Cruz, for that purpose.

Costas and the paramilitary UJC were also implicated in a 2009 assassination plot against Morales, whose key participants were of Hungarian and Croatian descent, linked to Eastern European fascist groups. Branko Marinkovic, a Bolivian-Croatian oil and soy oligarch suspected of having ties to the pro-Nazi Croatian UstaŠe movement, contributed $200,000 to the plot. Five years earlier, when Marinkovic headed the Pro-Santa Cruz civic committee, he took a young Luis Camacho under his wing

The U.S. State Department role here was as nefarious as it had been in Ukraine, working systematically for Morales’s ouster well before the October 20 elections. State claimed that Morales’s run for a fourth term proved his “undemocratic” character and predicted that fraud was inevitable. Secretary of State Michael Pompeo issued a statement immediately after the elections, claiming deep concern “over irregularities in the vote counting” and demanding an “accurate accounting of the votes . . . or a second round that is credible and transparent.”

OAS Secretary-General Luis Almagro, who has functioned as an appendage of U.S. State Department policy, seconded the call for a new round of elections and trumpeted the State Department’s claim of “irregularities” with absolutely no evidence.

Pompeo immediately lavished praise on Añez for restoring “democracy” to Bolivia, for planning to hold “free and fair elections” and restoring peace to the country. Having previously congratulated her for expelling Cubans and Venezuelans from the country and restoring relations with Israel, he followed up with a friendly December 6 phone call to her to discuss the bright prospects for positive diplomatic relations and a close working relationship in the future.

Although purportedly only a transitional president, Añez has already begun to dismantle Morales’s economic policies, replacing them with more “market-friendly” ones, while lining up with Ibero-America’s pro regime-change governments. One of her first acts in office was to establish diplomatic relations with Venezuela’s self-proclaimed “President” Juan Guaidó. 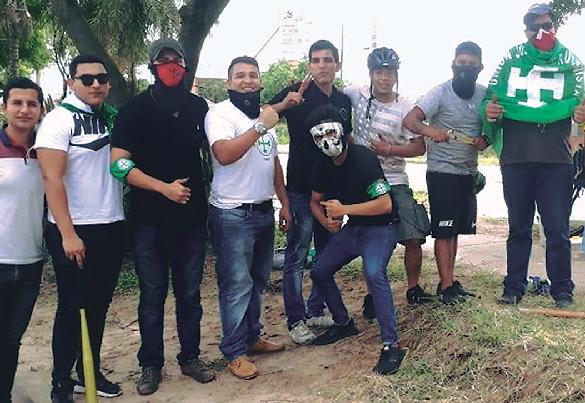 A new Bolivian “democracy”? Añez’s Democratic Union (UD) party was founded by the UJC-linked separatist Rubén Costas. On the evening of her swearing-in as President November 12, she stood on the balcony of the government palace with Luis Camacho at her side, and greeted supporters holding a Bible over her head, loudly declaring that “the Bible has returned to the palace. . . . Bolivia belongs to Christ!” Although insisting hers was only a transitional government that would reach out to the opposition, pacify the country and soon schedule elections, she immediately authorized a campaign to kill, jail and otherwise repress all opponents.

A few days later, on November 16, Añez decreed that the armed forces would be exempt from any criminal prosecution for actions taken to “preserve public order.” Her bloodthirsty Interior Minister Arturo Murillo swore he would “hunt down” former members of Morales’s cabinet, whom he called “animals,” and security forces began rounding up former government officials, and anyone else deemed a threat, parading them before media cameras. In late November, Murillo filed suit against Morales charging him with sedition, terrorism and provoking an armed uprising, and warned he’d soon file the same charges at the International Court at The Hague. He warned he would seek the maximum jail sentence of 20-30 years for both Morales and García Linera.

Several incidents of violent clashes that ensued over the following days—in which the armed forces opened fire on angry Morales supporters who refused to recognize Añez’s government—alarmed the UN’s High Commission on Human Rights and the Inter-American Human Rights Commission, among others, which sent delegations to investigate reports of gross human rights violations, with over 30 people killed to date and hundreds more wounded. Despite threats and intimidation, a visiting Argentine delegation was able to document continuing repression, beatings, disappearances and sexual assaults of Morales’s supporters.

Añez’s government has reserved special animus for Mexican President Andrés Manuel López Obrador for saving Morales’s life. Through patient and skillful diplomacy, including with Trump administration officials, Mexican Foreign Minister Marcelo Ebrard overcame obstacles put up by the Peruvian and Ecuadorean governments, which refused landing rights for refueling to the Mexican Air Force plane carrying Morales, and got him safely out of Bolivia to Mexico. There are indications that Mexico’s coordination with Trump officials may have spared Morales from suffering the fate meted out to Iraq’s Saddam Hussein or Libya’s Muammar Qadaffi by British imperial forces collaborating with President Barack Obama.

Añez’s Foreign Minister Karen Longaric announced November 26 she’d file a formal protest with the Mexican ambassador in La Paz for harboring five “fugitives” for whom arrest warrants have been issued. Among the five are former Minister to the Presidency Juan Ramón Quintana, one of Evo Morales’s most trusted advisers. Mexico has granted him asylum, but Longaric announced that Quintana will not be granted safe-conduct out of the country, as he is charged with “sedition, treason and ordering mass violence.” Similar charges have been filed against many other former government officials, journalists and legislators, some of whom have been arrested and jailed. Longaric also accused López Obrador of “destabilizing” Bolivia by publicly stating that Morales was the victim of a military-backed coup d’état.

While Añez has since withdrawn the decree giving the military carte blanche to repress the population, and has asserted that the country is now completely pacified and looking forward to mid-March presidential and legislative elections, this is hardly the case. In consultation with Morales, MAS party leaders have met to discuss selecting a presidential and vice-presidential candidate to run in upcoming elections. But in a meeting this past weekend, leaders of “civic committees” from several departments, who share Luis Camacho’s fascist ideology, voted up 16 resolutions, including one calling for putting Morales and his former ministers on trial for unleashing civil unrest in the wake of the October 20 elections.

In a clear threat to MAS members and legislators, they also vowed to hunt down the “intellectual authors” of vote fraud and human rights violations and didn’t rule out shutting down the Legislative Assembly (ALP) altogether, should it dare to pass “unconstitutional laws.” Añez has announced that she will veto the Guarantees Law just voted up by the ALP, which protects constitutionally guaranteed rights and freedoms of anyone engaging in political activity. The law, Añez claims, is just a way of letting MAS members off the hook, allowing them to provoke with impunity.

Luis Camacho, meanwhile, announced November 30 that he will run for President. On December 9, the Inter-American Dialogue, the Washington, D.C.-based thinktank that speaks for Wall Street and London banking interests, announced “A Conversation with Luis Camacho,” to be conducted via its Twitter account on December 12. Apparently unbothered by Camacho’s Azov Battalion resemblance, the Inter-American Dialogue described “lawyer” Camacho as a “new and significant leader in the anti-Morales protests” after the October 20 elections.