A Health System for the Future 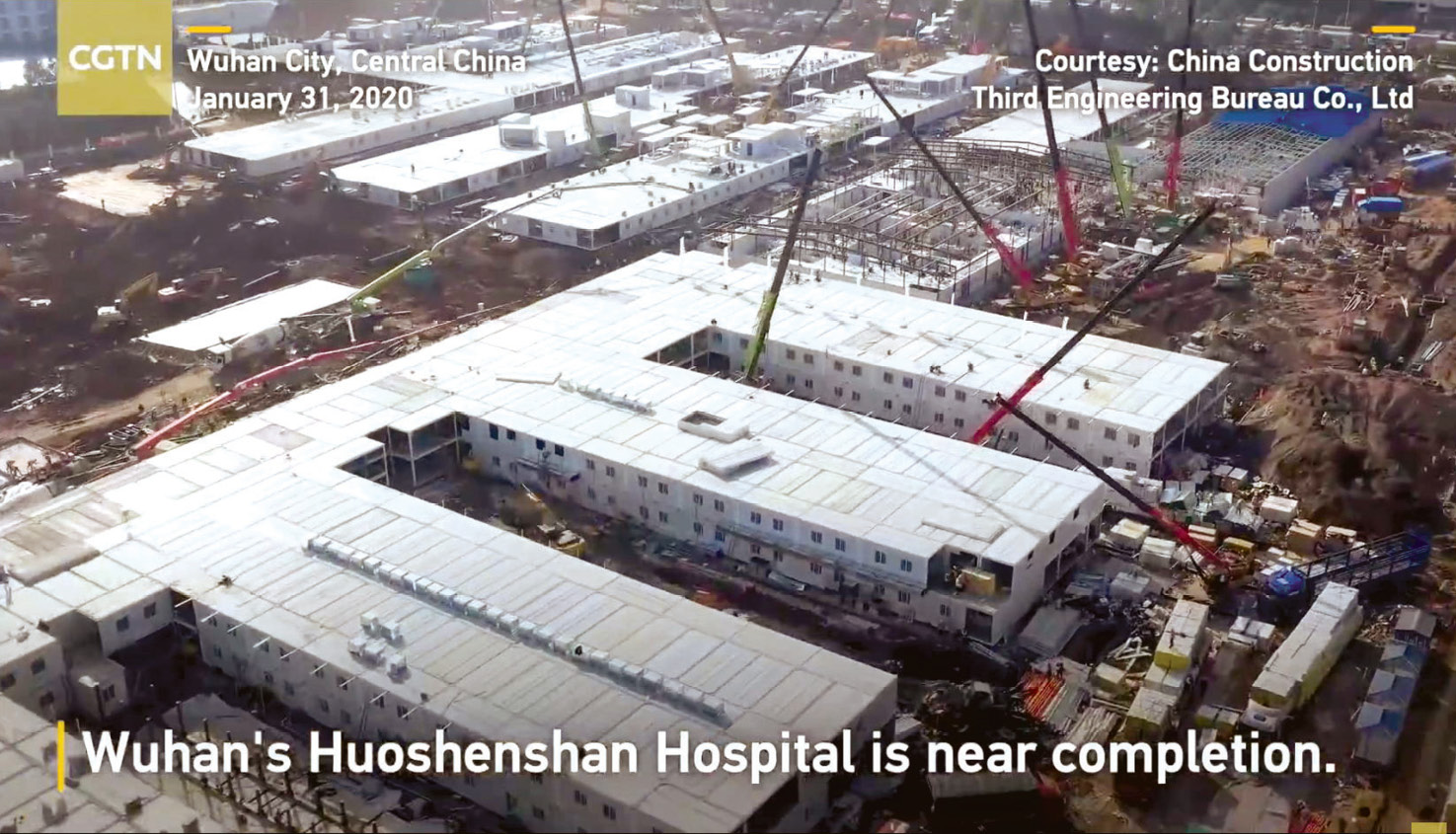 CGTN
Construction of the thousand-bed Huoshenshan emergency field hospital for COVID-19 patients was begun on Jan. 23 and completed on Feb. 2, with thousands of workers working around the clock. This photo was taken on Jan 31. Leishenshan Hospital, built with the same design, was finished on Feb. 8.

The greatest of all resources is the human mind.

It is the source of all revolutionary scientific concepts, powerful new technologies, and beautiful works of art. How many priceless contributions to human progress have been lost due to grinding poverty, a lack of education, or early death? To develop and safeguard this most precious of resources, we require a global health infrastructure, which itself depends on the essential physical infrastructure laid out elsewhere in this report.

We will begin with measures to be taken in the United States, then discuss the needs for less-developed countries.

No Debate Between Health and the Economy

Failing to defeat the virus in a timely manner will have far more devastating effects on the economy than will measures taken to stop its spread. The sooner case numbers are brought down and new infections can be tracked individually, the sooner we can take up the task of restarting work—both old jobs, and, emphatically, employment in the development projects discussed throughout this report! China, which responded very strongly to the virus (something that was obvious to anyone in the world watching at the time), was able to keep cases relatively contained and is already seeing industrial recovery, with year-on-year manufacturing growth already seen in April.

The United States should immediately take up the task of achieving the following:

• Bring testing capacity to a level of 5 million per day (150 million per month) within two months. This level will allow for export of test equipment and materials, of which the United States should become an exporter to assist those nations unable to manufacture their own.

• Fund research for treatments and vaccines, such as the U.S. crash program called Operation Warp Speed, and speedy production and distribution of these new capabilities.

But the broader requirements of developing a global health system for every nation on the planet requires much more.

Ask a group of public health experts what has done the most to improve human health and they will immediately give the answer: “sanitation.” But today more than two billion people lack access to clean water, adequate sanitation, or both. This leads to 800,000 children under 5 dying from diarrhea every year. Proper disposal of sewage and the protection and purification of water sources have saved hundreds of millions if not billions of lives over the nearly two centuries since such measures have begun to be implemented most rigorously.

The deployment of temporary sanitation facilities (which could be mass-produced and then distributed) will be a stop-gap measure while durable improvements in infrastructure are constructed. And that construction will be a source of meaningful employment for literally millions of people across the world.

Hospitals and Medical Equipment: The world as a whole possesses a current inventory of 18.6 million hospital beds. This constitutes a huge deficit. The standard developed by the United States, under the Hill-Burton Act, was 4.5 hospital beds per 1,000 people for each county, in order to ensure the health and well-being of the population.

Current levels are 2.8 hospital beds per 1,000 people in the United States, 0.7 for South Asia, 0.7 for the Heavily Indebted Poor Countries, and 0.5 for Nigeria, which comprises one-fifth of the population of sub-Saharan Africa. To meet a standard of 4.5 beds per 1,000 people, the world would have to increase its hospital bed inventory to 35 million beds, nearly double the current level. This would require the construction of 35,200 new modern hospitals, especially in Africa, Ibero-America, and Asia.

Beds themselves do not save lives. Medical staff are required, and acute cases demand additional equipment, such as ventilators.

For the entire world to be at the United States’ per-capita level of ventilators would require a global inventory of 4 million.

The total global inventory of ventilators is hard to determine, but there are certain figures that point to the problems of dealing with COVID-19 in impoverished nations lacking health infrastructure (see Table 1). The United States currently has about 500 ventilators per million for its 330 million people.

Going on the Offensive: Revolutions in Biology

We must advance our understanding of viruses themselves, such that in the near future we can do more than react to each new outbreak. Viruses perform many functions besides causing disease, and demand to be understood in a broader scope than the Earth itself.

In the opening section of his 1927 writing, The Biosphere, Russian scientist Vladimir Vernadsky says,

The history of the biosphere is ... sharply distinguished from that of the rest of the planet, and the role it plays in the planetary mechanism is quite exceptional. It is as much, or even more, the creation of the Sun as it is a manifestation of terrestrial processes.

Viruses themselves are an area of study that could give us unique insight into the role of extraterrestrial factors in the shaping of the biosphere and its evolution. After the discovery of viruses in the 19th Century, we have learned that viruses are inseparable from life—they are pervasive throughout the biosphere and are known to infect every type of organism. There are millions of virus particles in each teaspoon of seawater; billions of viruses float in the air currents high in the atmosphere. Inside the human body, just has we have a microbiome of trillions of bacteria, we and other living things also have a virome of likely trillions of viruses living inside us as a regular part of our organism.

Viruses play an important role in a phenomenon called horizontal gene transfer. We normally think of genetic material being passed from parent to offspring, but in horizontal gene transfer, genetic material from one organism is transferred to and incorporated into the genome of another, unrelated organism. This has been known to occur regularly in single-cell organisms, but studies in the past decades have shown horizontal gene transfer occurring between many types of more complicated organisms, such as plants, fungi, and even animals. Some researchers suggest that upwards of 100 genes in the human genome were transferred there at some point long ago by viruses, including genes dealing with metabolism and immune system response. This idea disrupts the typical textbook “tree of life” with its separate, parallel branches, and posits an evolutionary process which is much more interconnected.

Now let’s look at this in the context of the Solar System and galactic environment. First is some very interesting research begun in the 1980s on the seasonal pandemics of influenza, which, like many other seasonal phenomena connected with solar radiation, breaks out somewhat simultaneously each year in the Northern hemisphere, then migrates across the tropics to the Southern hemisphere, and back north again the following year. 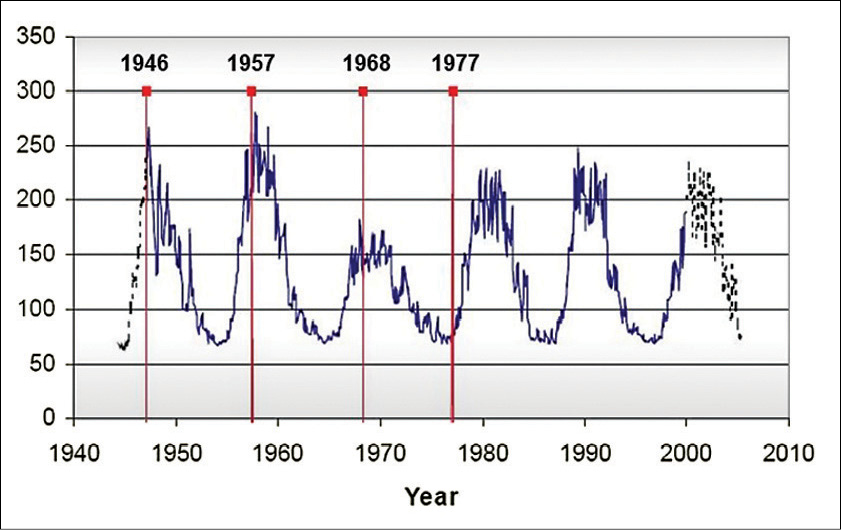 One element that interested researchers was the rhythm of outbreak of new strains of influenza over the past century, which shows an interesting, even if not complete, correlation with the 11-year solar cycle. However, looking over a longer period of time, 300 years, we see the possible fingerprint of a galactic driver. Not only do pandemics tend to occur more frequently during periods when the solar maxima have been more powerful (indicated by the blue curve), but it is also the case that the anomalous years of pandemic during solar minimum were periods during which Earth received a higher influx of cosmic radiation from outside of our solar system, due to bright supernovae.

A question mark left by researchers involved in these studies is the possible mechanism. It is known that viruses can be activated and deactivated by certain frequencies of light. It has also been observed that in some astronauts on the International Space Station, latent viral infections have suddenly become active. While all this research is still quite preliminary and requires further investigation, it is undeniable that the anomalies highlighted here hint at a higher causality and modulator of the development of life on Earth than mere earthbound chemical reactions.

Fundamental discoveries about these topics could revolutionize the way we understand and treat viruses—and human health in general.