This is the edited transcription of the presentation by Erica Muhammad to the Schiller Institute conference on September 6. Her remarks conclude our progress report on the work done in America on the Committee for the Coincidence of Opposites initiative by Helga Zepp-LaRouche. 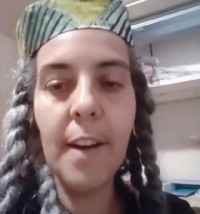 I just want to add to some of the things that we were able to do here in Macon County, Alabama. I work with Tuskegee University. You heard about the Community COVID Task Force. That is a major relationship that came out of our work dealing with the pandemic. But we also were able to work with the university in getting more testing in our area.

Throughout the Black Belt we’ve had virtually no testing at all. We’re lucky if we can having testing one day a month. So we don’t have accurate numbers, because we don’t have accurate testing, but we did get the university to agree to start manufacturing its own testing kits. And because they are a scientific university, they have the know-how in how to do that. TM46 (The Movement 46, organized by the Tuskegee Macon County Community Foundation) was able to actually offer testing where it didn’t exist, or where it existed in a way that was not very accessible. So that’s one thing that came out of our work in the community that’s very important, that could be reduplicated in other areas as well. And it is going to be increasingly easier to do, as the testing technology improves.

I want to also share a little bit about our health navigators. You know a little bit about our first outing, which was with our law enforcement community. Chief Frazier talked about that. We did a couple outings initially like that, but then we were able to recruit young people in Tuskegee, mostly graduate students or recent graduates of the university, and we created a health navigator team. They are peer educators, so that means they’re known by people in the community and that we will actually take COVID information door to door. Because we’re very aware that a lot of people just don’t even have the correct information. So being able to deliver that information is very critical.

An Epidemic of Loneliness

And then the other thing we discovered while going door to door, is that the quarantine is creating an epidemic of loneliness, and there’s a lack of human contact that’s just not being addressed. Now, there are ways that can be addressed, but if you don’t know that it’s a problem, you can’t come up with a way to solve that problem. When we take the navigators out, we’re very virus sensitive, so everybody is masked up and social distanced; we don’t go in the houses, but we make sure the residents get the information they need.

Another thing we were able to do through TM46, is work with our elected leaders and the task forces who are all of our elected leadership in the county. So some of that work includes public policy—but we’ve had policy in the county and we’ve had policy in the state, but it’s not always being practiced. So we found out that there’s also a lot of public relations that has to go on, in terms of why people don’t take this virus seriously.

There are so many different reasons why people don’t take this seriously. There’s a lot of rumors about it, that it might not really be a virus—it changes by the week. But what we saw is that we have these statistics of how many people are catching it, how many people are dying from it, and we realized that we don’t actually have faces to go with these statistics, so that’s one of the things we’re working on now, is being able to put a face to those people in our community who we have lost to this virus, and that really makes this real for people.